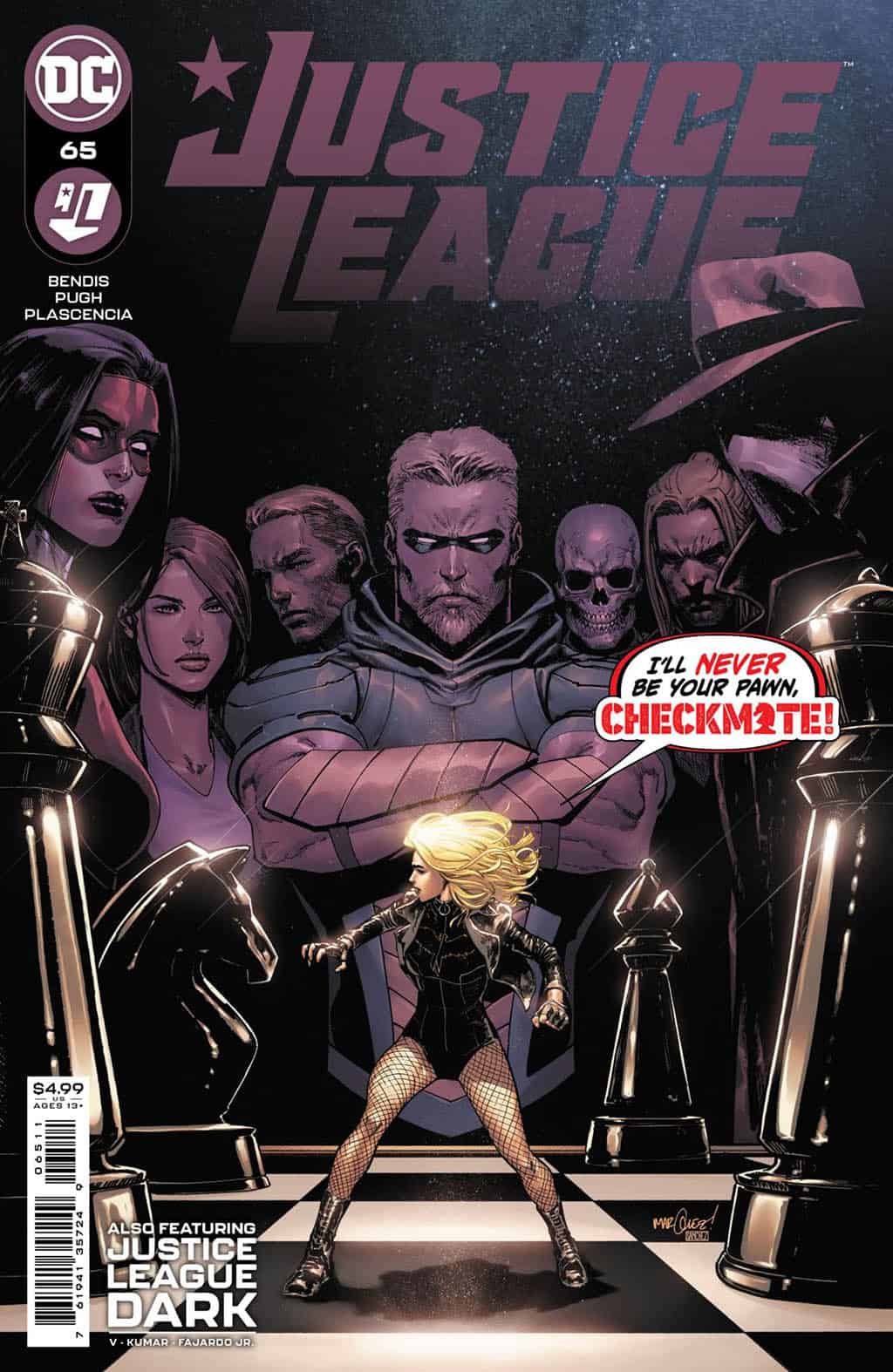 The Justice League is attacked on two fronts: Synmar finds Superman and most of the League at the Hall of Justice. Black Canary and Green Arrow are challenged by Deathstroke. Deathstroke attempts to kidnap Daemon Rose, but this isn’t the Deathstroke we expected. We learn more about Green Arrow’s new connection to Checkmate and how the spy-game was changed by Leviathan. Both battles go very poorly and leave us on explosive cliffhangers.

Batman seems very concerned about the Hall of Justice. We’re left without an explanation wondering what’s so important that Synmar shouldn’t gain access to the building.

I thought this with Justice League #64 too, but Bendis has a great grasp on the relationship of Green Arrow and Black Canary. Their scenes with Daemon Rose are excellent. The rest of the Justice League often have really odd dialogue that occasionally sounds like something “Batman would say”. Queen Hippolyta did not seem herself this issue.

This is the second issue for Steve Pugh, and he makes use of every corner of space to fit in this giant cast. I’d like to see him get an entire issue to work with. There’s a scene where Synmar attacks Hawkgirl. There’s so much power in one little panel on the page. It could have been a single, full-page image of Synmar screaming “Thanager!” Marquez’s cover looks cool, but it belonged on an issue of Checkmate not the Justice League. 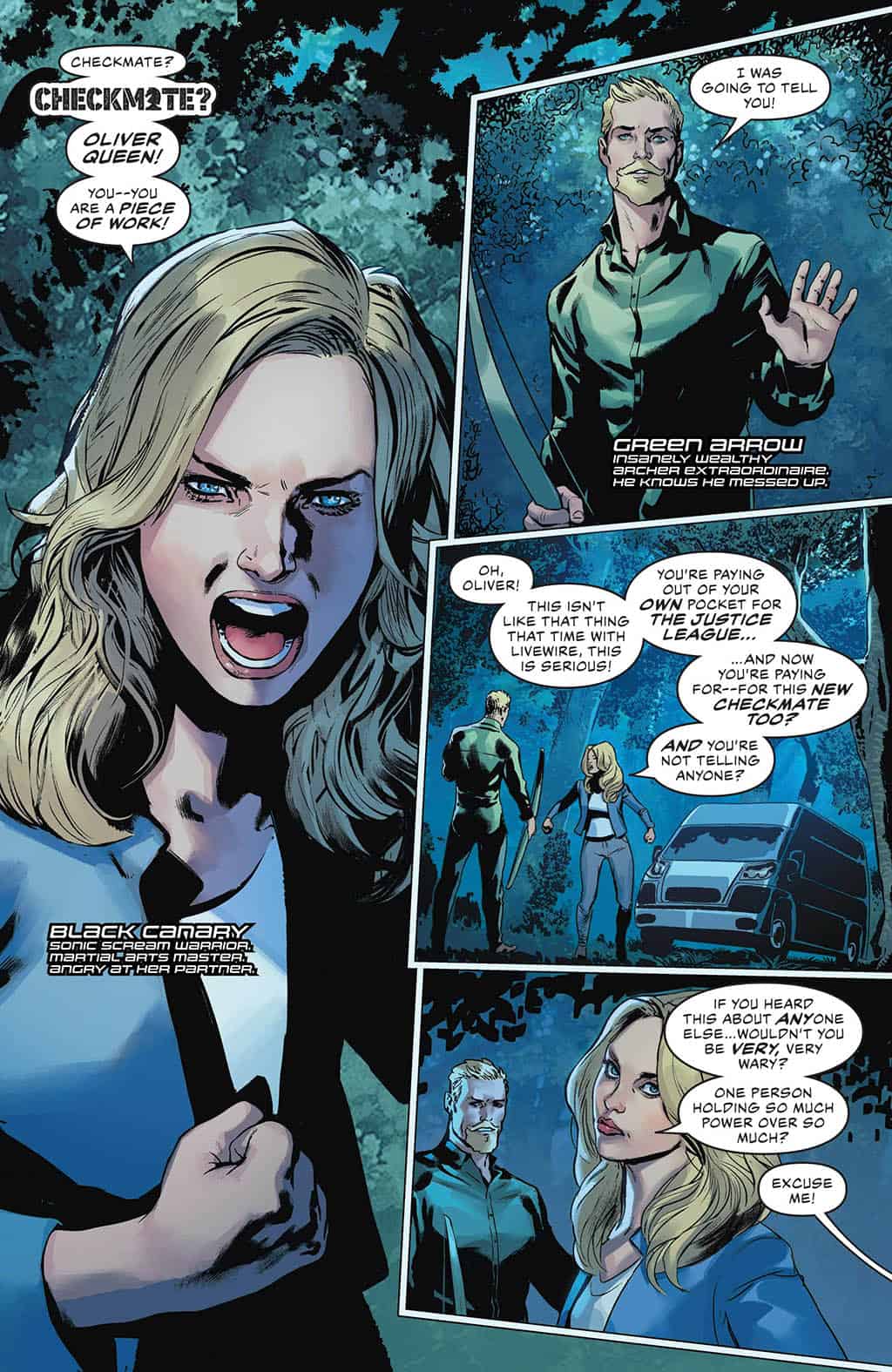 One thing that I’ve come to appreciate in Justice League is the character names and descriptions. They’ve been expanded in this issue to clue us into previous events. It’s quick. It’s informative, and I wish more comics did it. The panel work in this issue is inspired and used to enhance all of the action. Diagonal panels, overlapping panels, and binocular shaped panels help with the over-all flow of the comic. Josh Reed adds to the energy and dynamic of the action with sound-effect words.

If you like the Wonder Twins or the classic Hanna-Barbera The Challenge of the Super Friends cartoon, watch for the Easter eggs in this issue.

When did splashing an alien boy transformed into water allow Aquaman to fly? For that matter, Grodd can’t fly either. It’s difficult dealing with flight capable and ground-limited heroes, but this scene was just odd.

Ram V knows his characters well. Batman sounds like a tech-whiz. Elnara a knight of old. Merlin a cocky villain.

With just two issues of Justice League, I’ve become a big fan of Sumit Kumar. The art in Justice League Dark is excellent once again from facial expressions, to action sequences, to giant monsters.

There’s one scene with Elnara running that’s a brilliant use of motion. There are no panels, but it still works. You have to see it to believe it.

“I know the truth of what Merlin is attempting to do,” Randhir

Never underestimate a good cliffhanger, and this issue we get three! The last page of the Justice League Dark section is so good it could be a poster. The team is assembled, and next issue we'll see how they fair against Merlin.