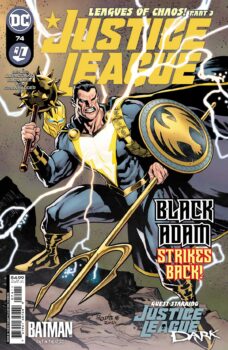 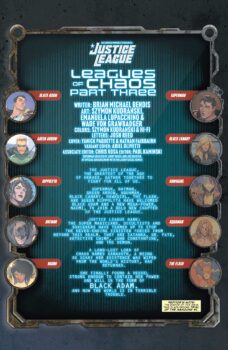 Back in Justice League #72, the stage was set for a colossal showdown between DC’s premier superhero team and Xanadoth, a villain set on world domination.  The set up had some promise, but came with the caveat that it had to be executed by Bendis’s departure from Justice League with issue #74.  That has led to some disjointed pacing, a trend that continued in this week’s installment of Justice League as the clash came to a head.

In Justice League #73, Madame Xanadu was spirited away by the evil Xanadoth.  Similarly, Nabu, usually associated with Doctor Fate, transported Naomi to another dimension.  During the final chapter of Leagues of Chaos, the readers learn that the two heroes are each expected to do the bidding of their respective lords of chaos.  It is left unclear what Xanadoth expects of Madame Xanadu, though, as in short order an assemblage of heroes from Justice League Dark and the main team arrive with bad intentions.

A wide scale brawl ensues as the team’s sorcerers attempt to wrest Black Adam, possessed by Xanadoth since issue #72, from the villain’s control.  Big moments from Bendis favorites Doctor Fate, Naomi, and Adam ensue as the arc wraps up.

The problem with this issue and the wider story being told is that there was no time to establish the stakes.  Leagues of Chaos #1 set up an arc that would need 5 chapters at least to have an impact.  Instead, all of the rising action was haphazardly crammed into Justice League #73, while #74 rushes through a payoff that is trying to be epic, but falls flat in the end.  That is more a testament to the overambition of the creative team than the actual contents of this issue.

Competent art is once again split three ways, adding a visual reminder that Leagues of Chaos was too much, too fast.

Justice League rebounds slightly from a rough previous issue as Leagues of Chaos reaches its end.  The issue, supersized though it is, is still overstuffed, but is still far more coherent than #73.  There is some potential here, but gaunt plot development prior to issue #74 ensured that this arc would be a miss.  The Bendis Justice League dies as it lived, promising but unfulfilled.