Justice League Incarnate #1: Rollin’ Down the Multiverse With My Shotgun 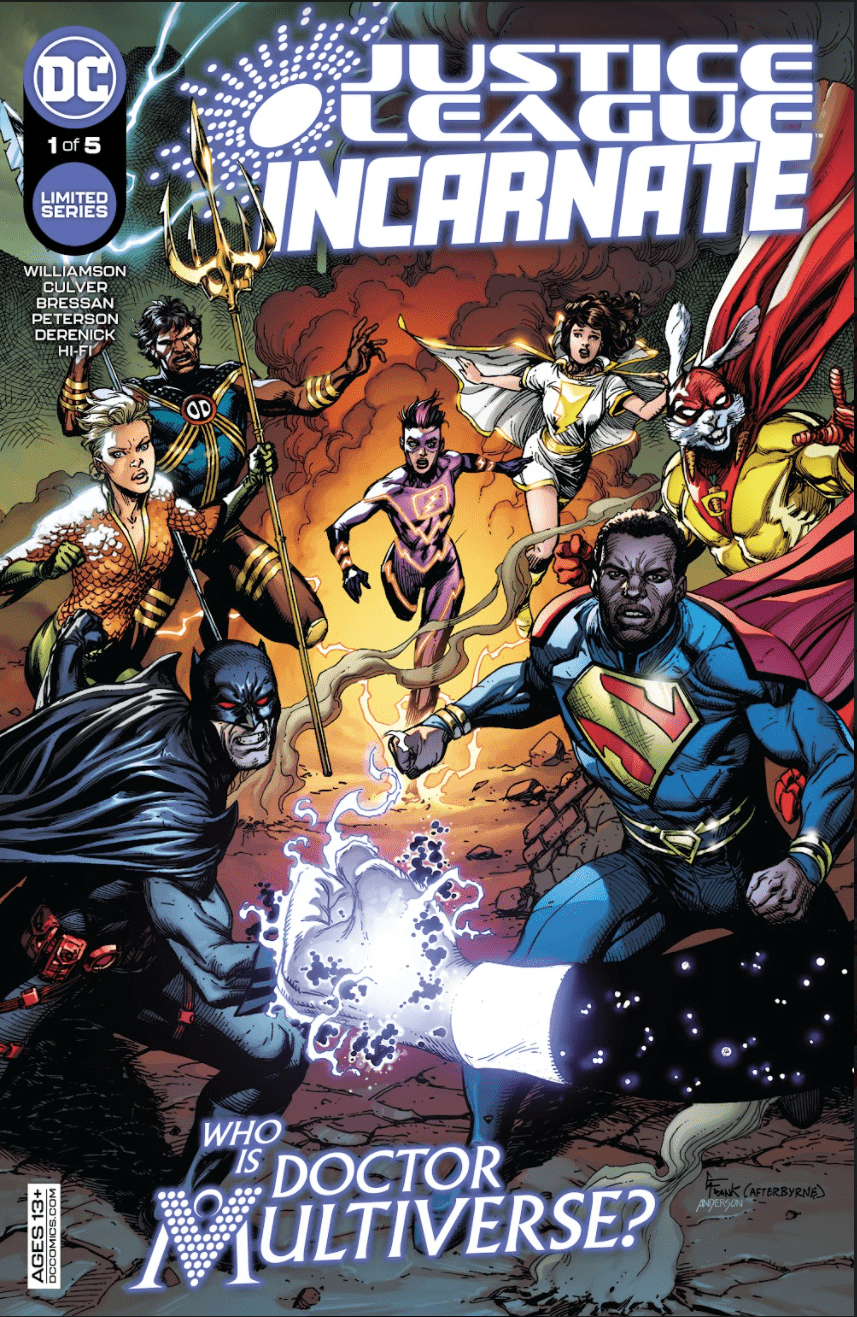 When last we joined our heroes in Infinite Frontier...

Justice League Incarnate (formerly just Justice Incarnate), a collection of heroes from various worlds throughout the multiverse, joined forces to stop Darkseid from siphoning some sort of energy from a "crack in the multiverse," opened up by Barry Allen (whom he tricked). The crack itself lead to the unfathomable "Great Darkness," a vast antimatter energy that he'll use to dominate, well, everything. The only thing worse than "Darkseid Is," is "Darkseid is in control of the whole multiverse."

It's complicated. Multiverse stuff usually is.

We now rejoin the Justice League Incarnate as they formulate a counterattack toward Darkseid's growing threat...

Let’s just get this out of the way, first and foremost: Justice League Incarnate is FUN! This very, very easily could have been a leaden, portentous, doom-smothered comic revolving around the End of Everything Again, and while it definitely is about that, there’s no denying the amount of joy writers Joshua Williamson and Dennis Culver are having playing with DC’s never-ending toybox of variant action figures. What could have been an exercise in tedium – due to the lack of relative stakes in dealing with characters whose deaths, as variant versions of the heroes we know and love, are inherently meaningless – is anything but. Williamson and Culver wisely realize that the “lack” of stakes is exactly what makes these characters such a joy: literally anything can happen. President Superman can have things happen to him that never could befall Kal-El; same for Aquawoman, Captain Carrot, Thomas Wayne Batman, and so on. That sort of freedom means the doors get completely blown off of expectations, and readers can’t predict nearly as easily what could happen next.

That extends to the very multiverse, too. Earth-8 (DC’s Marvel analogue world) is on full display here, and in a comic where anything can happen, everything does. Looking for a not-too-subtle take on the Marvel or DC debate? Williamson and Culver state their case pretty clearly, and it’s not too much of a mystery which side the writers fall on… Also? The “Who would win, Darkseid or Thanos?” debate gets put pretty clearly to rest, too. (Sidebar: these versus matches are always reliant on whoever’s writing the comic, so it’s not like this is an actually decisive victory. Just go with it, and have fun.)

There’s a lot of set-up here, which is expected for a first issue. But it also means that a lot of secondary members of this League pretty much exist in name only. And that’s fine; there’s only so much that can be expected out of a five-issue mini. It’s clear that the main characters here are President Superman, Thomas Wayne, speedster Avery, and newcomer Doctor Multiverse (who has the most DC name in the history of DC names). The conflict is the looming threat that Darkseid represents vis a vis the Great Darkness (old school Legion fans know what a big deal this is), and everything else is gravy on the side: tasty, but ultimately empty calories. But sometimes empty calories are a good thing, as long as you don’t overdo it. Which serves Justice League just fine, because it fits its nature perfectly.

However, having four artists is a bit overkill. No one is saying that Brandon Peterson, Andrei Bressan, and Tom Derenick aren’t talented artists. But the jump from style to style is jarring, and throws the pace of the comic off. Plus – having three pencillers and two writers makes Incarnate feel like more of a comic by committee than an organic effort than it was perhaps intended to be. The artists all bring their A-game, though, which works for each artist’s individual scenes. Derenick, especially, gets to have an absolute riot with the climactic throwdown between Darkseid and not-Thanos Tartarus. The brawl calls for big, over the top panels, and Derenick delivers the pulpy good. Bressan is a new talent to me, but acquits himself well, and Brandon Peterson is, well, as exceptional as ever. Hi-Fi’s colors are a multiversal experience unto themselves, and cover artist Gary Frank is as unstoppable as ever.

Now, this isn’t a comic for newcomers. Williamson and Culver do a decent enough job with delivering the exposition that it informs without overwhelming, but given the enormous amounts of layers to literally every aspect of this story, there’s only so much they can do. That’s the nature of dealing with the (presumable) middle chapter in a story with so many moving parts: there’s going to be lots of people struggling to catch up. But Justice League Incarnate is worth the occasional mind boggle, because at the end of the day, it’s simply fun. And sometimes that’s what we all need – especially at the end of the world.

Justice League Incarnate #1 proves to be an unexpectedly fun gem, digging into what makes DC's multiverse so much fun with a sharp eye for detail without wallowing in doom: the endless possibilities. Don't miss this comic!

Justice League Incarnate #1: Rollin’ Down the Multiverse With My Shotgun