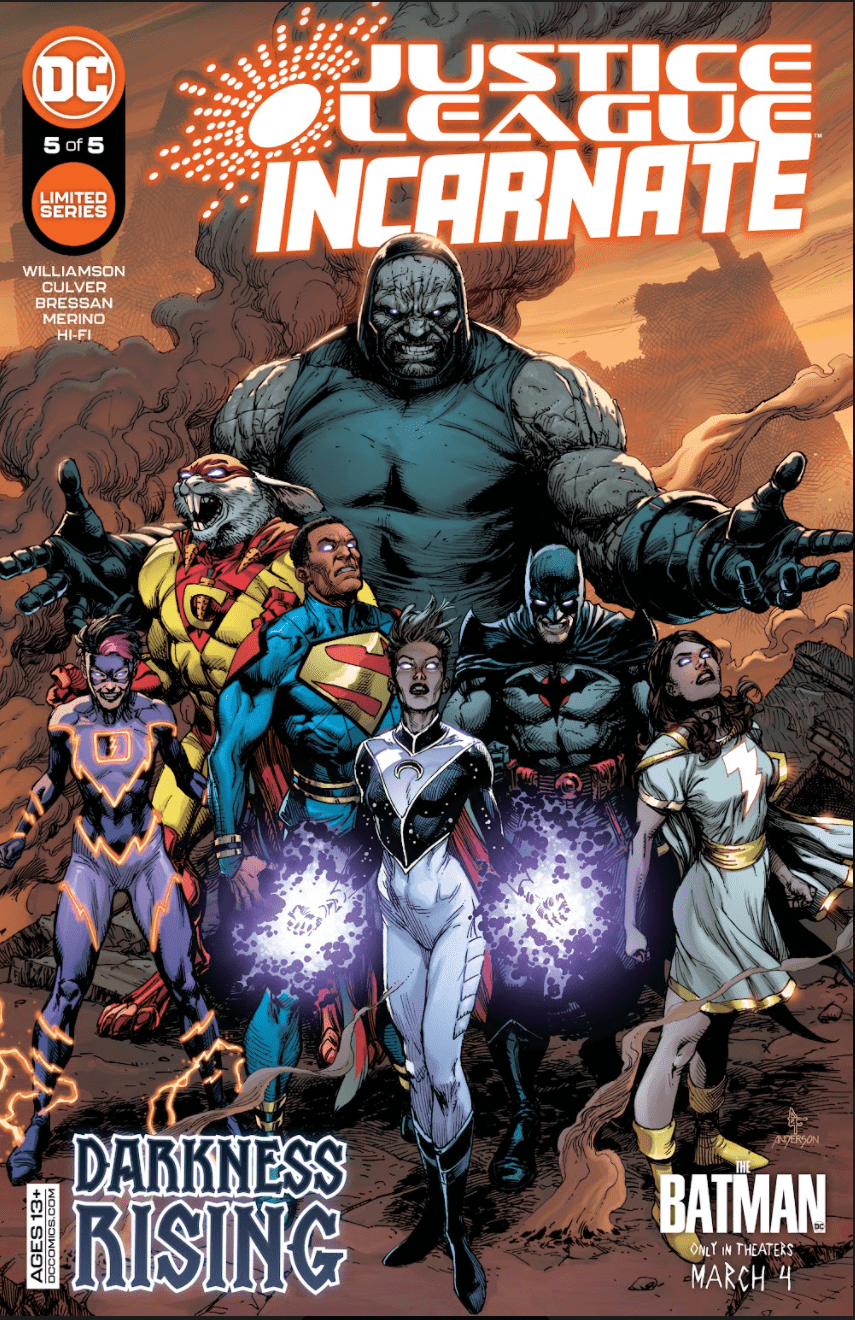 It's Darkseid versus the Great Darkness, for all the marbles of the omniverse! Can the Justice League Incarnate stop... wait, who should they stop?!

All things being equal, Justice League Incarnate has been a miniseries that should either completely work or utterly fail on its own preposterous merits. Fortunately, by leaning into the concept of DC’s evergreen multi-/omniverse concept, it’s been a series that, at the end of the day, I really wish had been an ongoing. Writers Joshua Williamson and Dennis Culver have been using it as a springboard to the recently-announced Dark Crisis, but damn, I’m going to miss this insanely brilliant series.

The brilliance of a comic that has freewheeling reign to careen throughout a limitless multiverse such as DC’s is that literally anything can happen. Pirate Justice League? Bring ’em on! Bonkers concepts dating back to Final Crisis? The more the merrier! In other words, by its very nature, Justice League Incarnate is perhaps the purest distillation of the anything-goes ethos of the multiverse. And, boy, it’s a shame to see it go.

But at least it ends with a bang.

There’s a lot of ground to cover with this issue, but at the end of the day, Williamson and Culver deliver on giving fans what they want: big, crazy shenanigans, complete with fan service moments such as… dare I say… “ORION IS!” that will make even the hardest, most cynical fanboy heart swoon. The duo threads the needle between two classic DC tales of yore, “The Great Darkness Saga,” and of course the O.G. Crisis on Infinite Earths, and while it will take the success or fail of Dark Crisis to know if they’ve actually pulled it off, the runaway creative success of this miniseries gives the upcoming main event quite a lot to live up to.

As with any plot-centric tale, though, characterization or individual character arcs are of secondary concern, and JLI is no different. We really don’t know much more about any of the characters than we did at the outset, but that’s a feature, not a bug. Not to belabor the point, but if this were an ongoing rather than a miniseries, there would certainly be room to see Aquawoman, Dino-Cop, Thunderer, President Superman, et al grow and change as people as the writers dug into their backstories. Alas, that’s not to be the case (at least for now… hey, you never know), but at the very least, everyone played their role and played it well.

The art this issue is far more consistent than in previous issues, which had upward of four pencillers at a go. Primary penciller Andrei Bressan gives it his all, and pulls it off with stellar aplomb, landing stylistically somewhere between Nick Bradshaw and Scott Kolins – not bad company to be in at all. Bressan, especially, gets to land some big, sexy action beats, and pulls them off admirably. Although I’d argue that (ahem, no spoilers), Jesus Merino gets the more purely fun sequence to illustrate, just on a geeky-cool level.

Ultimately, although it’s sad that JLI‘s potential is being cut short by virtue of being a miniseries, it has absolutely exceeded its remit when it comes to pulling off what could have been a rote, throwaway story. Historically, miniseries that exist only to serve as a ramp-up to a larger tale (see: literally any of Countdown) feel like pure fluff, a commercialized gimmick to gin fans out of their hard-earned cash. But JLI has been different. It’s truly felt like a bananas, heartfelt labor of love from a creative team that genuinely loves DC’s multiverse and cherished the opportunity to shine a spotlight on it. And they succeeded – and if that’s not rarified pedigree, I don’t know what is.

Justice League Incarnate #5 may feel bittersweet as an ending that comes too soon, but absolutely hits it out of the park in every aspect. Bring on Dark Crisis!