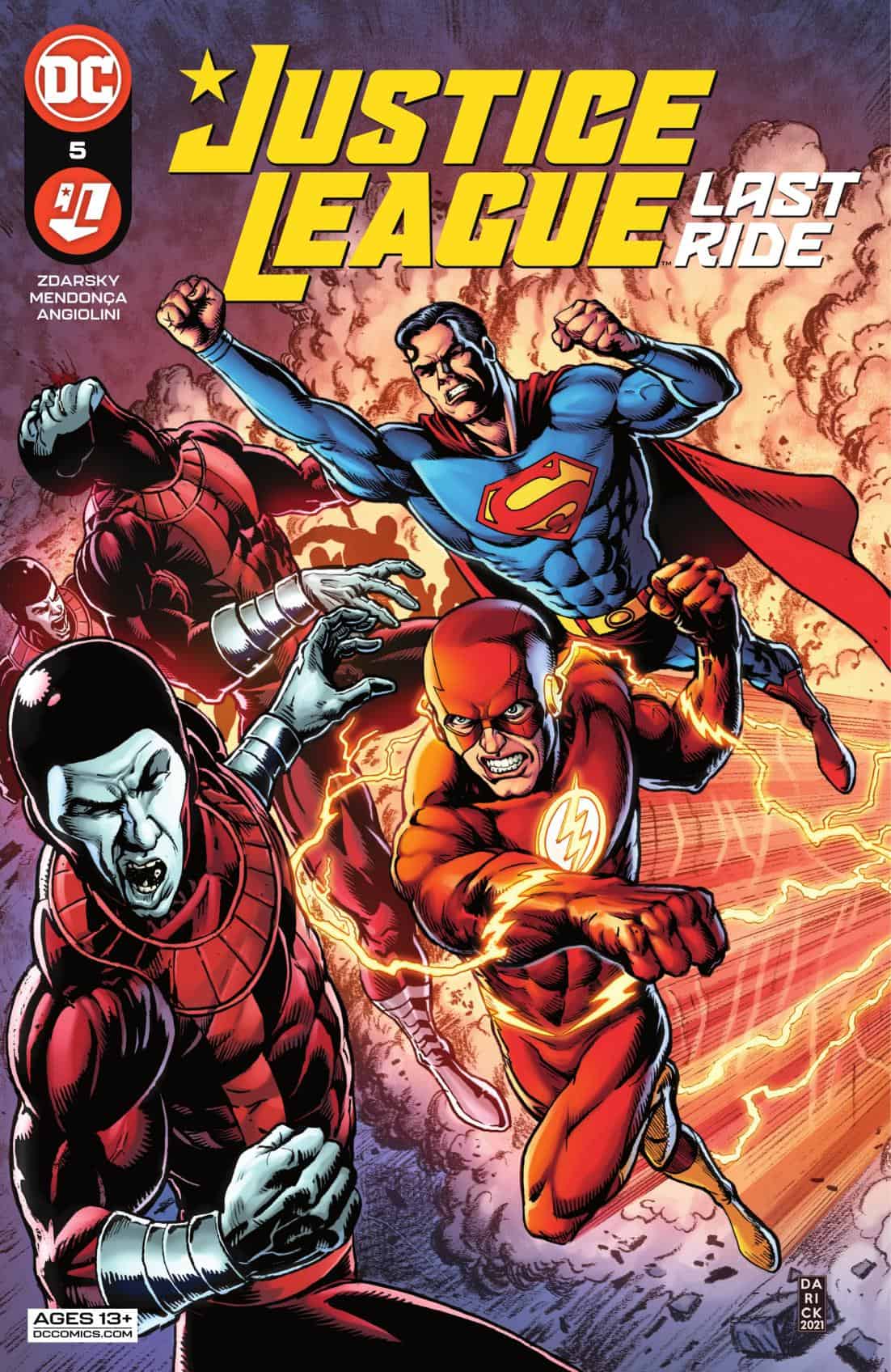 APOKOLIPS- NOT AS SAFE A PLACE TO HIDE A WAR CRIMINAL AS YOU’D THINK! The Justice League has been tasked with bringing the master of war crimes, your one and only Lobo, to trial in order to account for a life of treachery. But while the League thought Apokolips would be the safest place to store a wanted murderer, there are others out on the hunt for Lobo…

The amazing thing about comics is the way art and writing pair together, like two detectives in the Buddy Cop genre, and like the movies, when the chemistry isn’t there, the end product suffers. It’s unfortunate that “Justice League: Last Ride” #5, which continues Chip Zdarsky and Miguel Mendonca’s cosmic Midnight Run-esque adventure through the DC Universe, is one of those books where art and writing do not mesh together.

The issue picks up with the League hunkering down in the ruins of Apokolips, as they find themselves under siege from a spectrum of DC villains, including a Cyborg Superman assimilated by Brainiac. The team splits as Batman and Hal Jordan work to gain access to the Apokolips Boom Tube systems, while Flash and Superman battle the Brainiac army, and Wonder Woman and John Stewart dispatch Mongul. The issue then flashes back to the aftermath of Martian Manhunter’s death, highlighting the fractures in the League and Darkseid’s attempts to acquire power from the Lantern’s Central Battery.

Five issues into this series, it’s unclear who the book is for, as an amalgam of the Snyderverse and the animated series. It feels like a book trying to be evergreen for new readers leaving the cinema, but instead is a jumbled mess of characterization and design. It’s only in moments where Zdarsky breaks from the trappings of various Justice League adaptations and pushes the relationships between characters that the book comes alive. The tension between the Trinity is the clearest example of this, with Batman’s self-loathing doing more damage than Superman’s guilt trip ever could. Wonder Woman is the fulcrum of these two, having to force them to put aside their guilt and trauma to keep fighting, but it’s not hard to imagine by the end of the flashbacks to see Diana snap at the senseless death.

The dramatic tension leaps off the page and making Martian Manhunter the heart of the League that burns out, literally, is a fascinating concept. It’s the case of Zdarsky taking the best bits of continuity and characterization and tweaking it into something new and compelling. In a world where Zdarsky has proven himself over and over with this trick, it seems odd that the book would have to synergies with the various TV/Movie incarnations of the League.

What holds the book back from propelling into greatness is the art. There’s nothing at the surface level that offends, looks terrible, or even bad. Mendonca’s pencils and inks are solid, and colorist Enrica Angiolini does a great job matching the vibe of the story to the images, but it’s something indescribable that doesn’t click. It feels like the art doesn’t match the level of writing, creating a disparity in the storytelling. This book would click on another level with another artist with the same scope of Zdarsky’s writing. What also hinders this relationship between story and art is the consistency of the two timelines in the story. A pair of artist handling the during and after of the war with Darkseid would instantly improve the fluidity of the book. Instead, the uniformity of the art in the past and present highlights the mundane feeling of the series. Zdarsky is telling the last hurrah of the Justice League, in what could have been DC’s next DCeased or Injustice, but instead looks and feels like a lost arc from the New 52 era.

It’s a shame that the issue, and the "Last Ride" as a whole, has this discombobulated feeling. On paper, the book has everything going for it: a killer writer, a chance to explore the DC universe outside the bounds of continuity, and emotional status quo that earns the title of a page-turner. Unfortunately, the book doesn’t slot these elements together, and will burn out as another forgettable miniseries in DC’s experimental phase.

X:Men Trial of Magneto #2: Something’s Fishy on the Island of Krakoa
September 15, 2021

Star Wars War of the Bounty Hunters Boushh #1: Someone Who Loves You
September 15, 2021