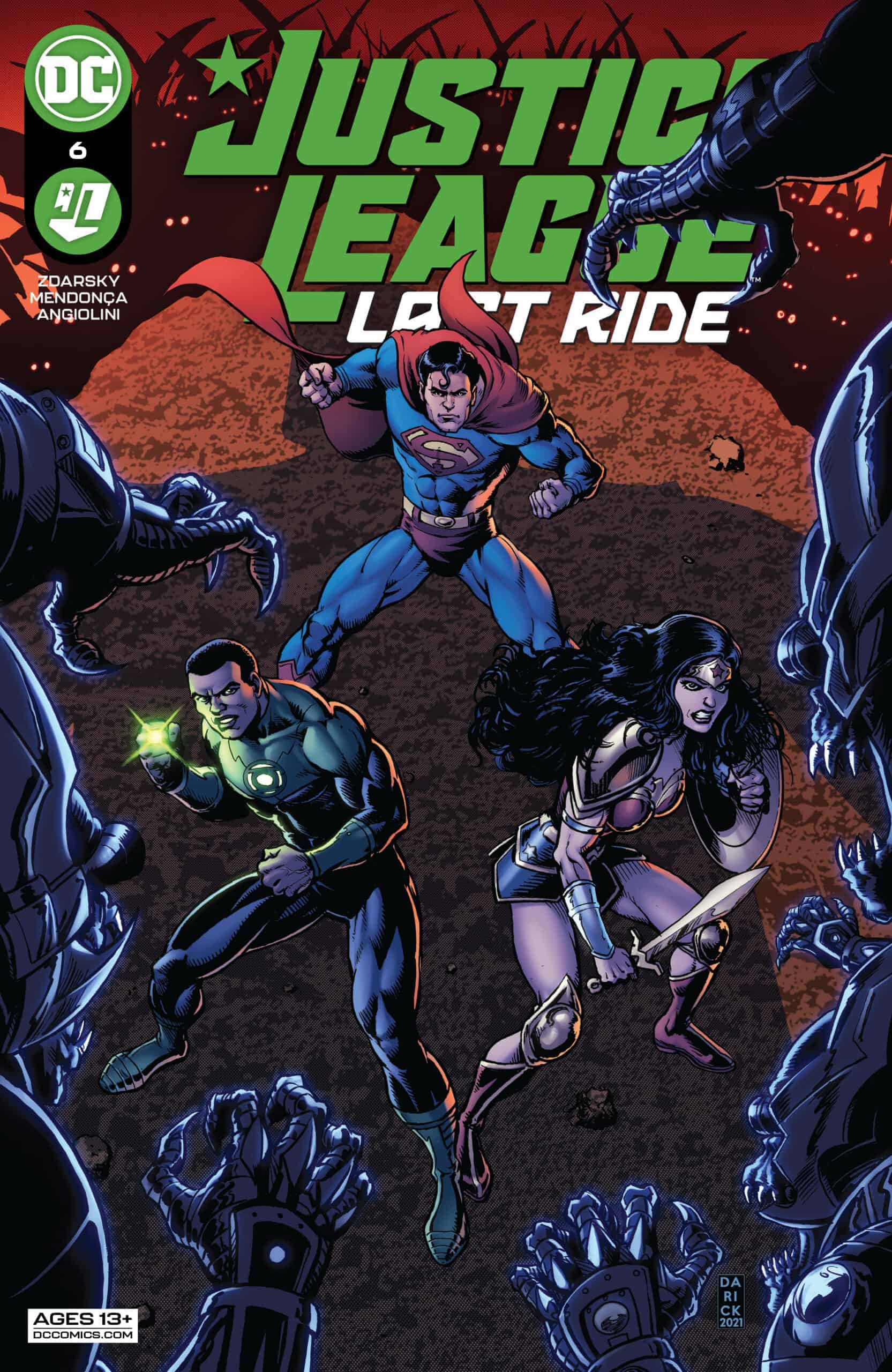 The JUSTICE LEAGUE is stranded on an Apokolips that's deadlier than ever, with Earth in its crosshairs! And while the League battles with hordes and the clock, they're presented with the ultimate quandary-protect the galaxy's most ruthless bounty hunter LOBO, sacrifice him, or do something...more unspeakable! Even worse, they must do all of this while dealing with a TRAITOR IN THEIR MIDST! Will they be too late, since all roads lead...to Darkseid?

Character resurrections are a hard thing to pull off in any medium. In comics especially, the seemingly endless cycle of death and rebirth has ballooned into an entire subgenre of Big Two event books. For every inspired Winter Soldier or Wally West revival, there are ten subpar revivals, retcons, or resurrection that devalue the stakes of a story.

Justice League: Last Ride #6 picks up with the League stuck on the dormant hellscape of Apokolips, trapped between a horde of Brainiac-infused Cyborg Supermen, and the remains of Darkseid’s contingency plan, which involves being resurrected from his hiding spot in the body of Hal Jordan. The issue bridges the gap of past and present, moving from Darkseid’s seeming defeat to his return. Along with his revival is the reawakening of Apokolips, as well as the return of Martian Manhunter, in an unexplained shape and form.

Nothing in the script is egregious, and it’s competently written. Chip Zdarsky doesn’t miss a beat in the way in which his story unfolds across the pages of the book. The issue, and the book as a whole, instead of feeling like a Zdarsky book, which generally results in being fun, innovative, or poignant, continues to feel like a kid smashing his action figures together. The deeper character tension and exploration of a guilt-ridden League are quickly pushed aside by the threat of Darkseid. It’s a shame the more interesting parts of the book are swept away by the number of action sequences.

The central premise of Martian Manhunter being the heart of the League, which is ripped out and destroyed by Darkseid, is an excellent premise that feels lacking in the pages of this book. Six issues into this out-of-continuity series, John has returned in some capacity and it feels underwhelming. In a book that positions itself as exploring the ramifications of a major character’s death, being told outside the bounds of continuity, it sure feels like every decision is the safer option. Similar out-of-continuity books, like Zdarsky’s own Spider-Man: Life Story, stick around and resonate because they make the hard choices, and take the path less explored when examining how a mostly static set of characters can experience their world and the consequences of their actions.

Miguel Mendonça’s art is also solid in this issue, the quality of the pencils not wavering as the book is filled with more and more chaotic elements. The overall aesthetic of the book is still a hodgepodge of various designs and seemingly random elements from multiple eras. Darkseid’s costume is the standout off-putting design by far. Enrica Angiolini’s color does no favor in the way in which the villain is rendered. Maybe it’s due to the pivotal influence the DC Animated Universe has, but Darkseid without a tunic and skirt combo just feels naked. Here, Darkseid’s design, matched with the coloring, makes him resemble Thanos with a flare-up of eczema.

It’s hard to settle on where Last Ride falls, as it’s a walking contradiction of quality. The story and art never feel sloppy or unprofessional, but they constantly oscillate between rout tropes of modern superhero comics and trying to meditate on the way death alters chosen family dynamics. Maybe it’s because the story never crystalizes into something meaningful but finds itself rehashing the same tired beats of the Justice League over and over again.