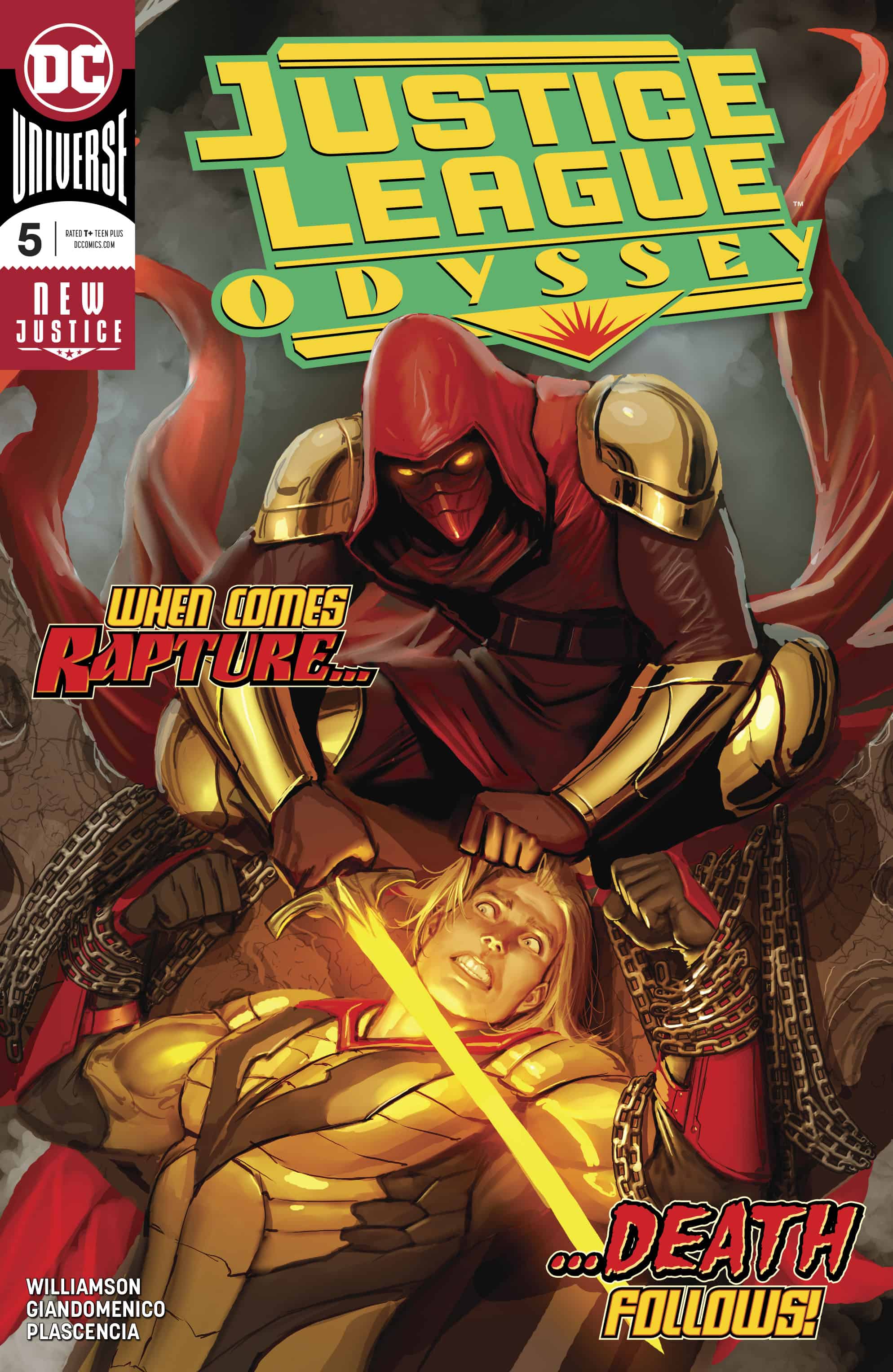 Things aren't looking too great for our heroes. Cyborg's followers, hellbent on seeing him ascend as their god, are out to stop anyone who might stand in their way - and at includes Jessica Cruz, Starfire, Azrael, and his acolyte Rapture! Swiftly overwhelmed by their cybernetic attackers, Jessica uses her ring to whip them up a rapid escape...

Elsewhere, Cyborg is being cajoled by his followers' high priest to join with his homemade Mother Box, so that he can upgrade not just his followers but everyone in the Ghost Sector, bringing everyone to the same order! Cyborg, naturally, refuses. 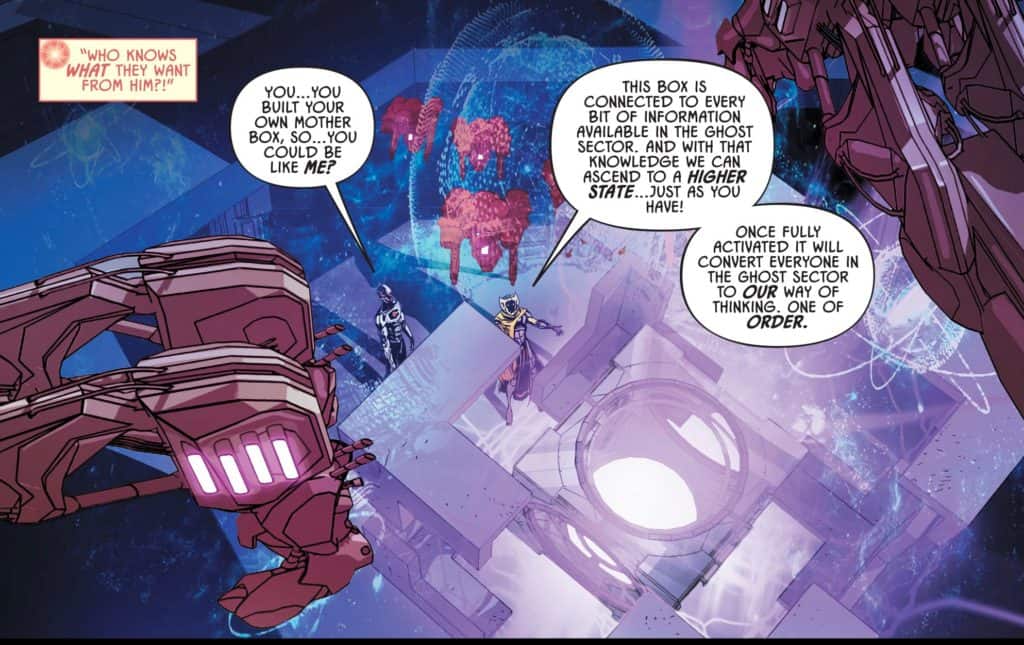 But war is coming. And Cyborg might be convinced otherwise.

Meanwhile, having escaped the Coluans' mech armies, the rest of the heroes make a devastating discovery about Rapture. And Darkseid retrieves a hidden weapon of his own that brings him one step closer to fulfilling his master plan! 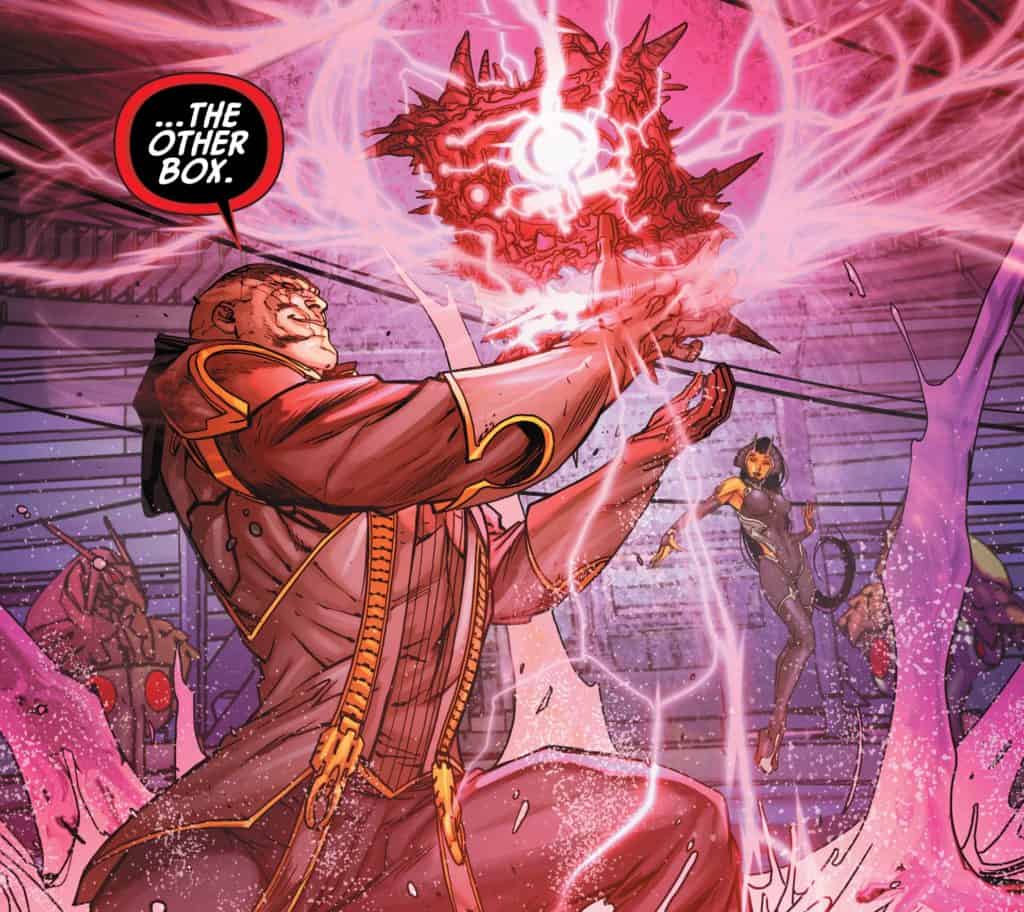 This issue really accelerated the pace of the story so far. Despite the rote Borg-like plan of the Coluans, I very much enjoyed the issue’s overall trajectory. Several lingering plot points snapped into focus (always a good thing, five issues in), and we got a firmer sense as to what this book is going to be about in the long haul. 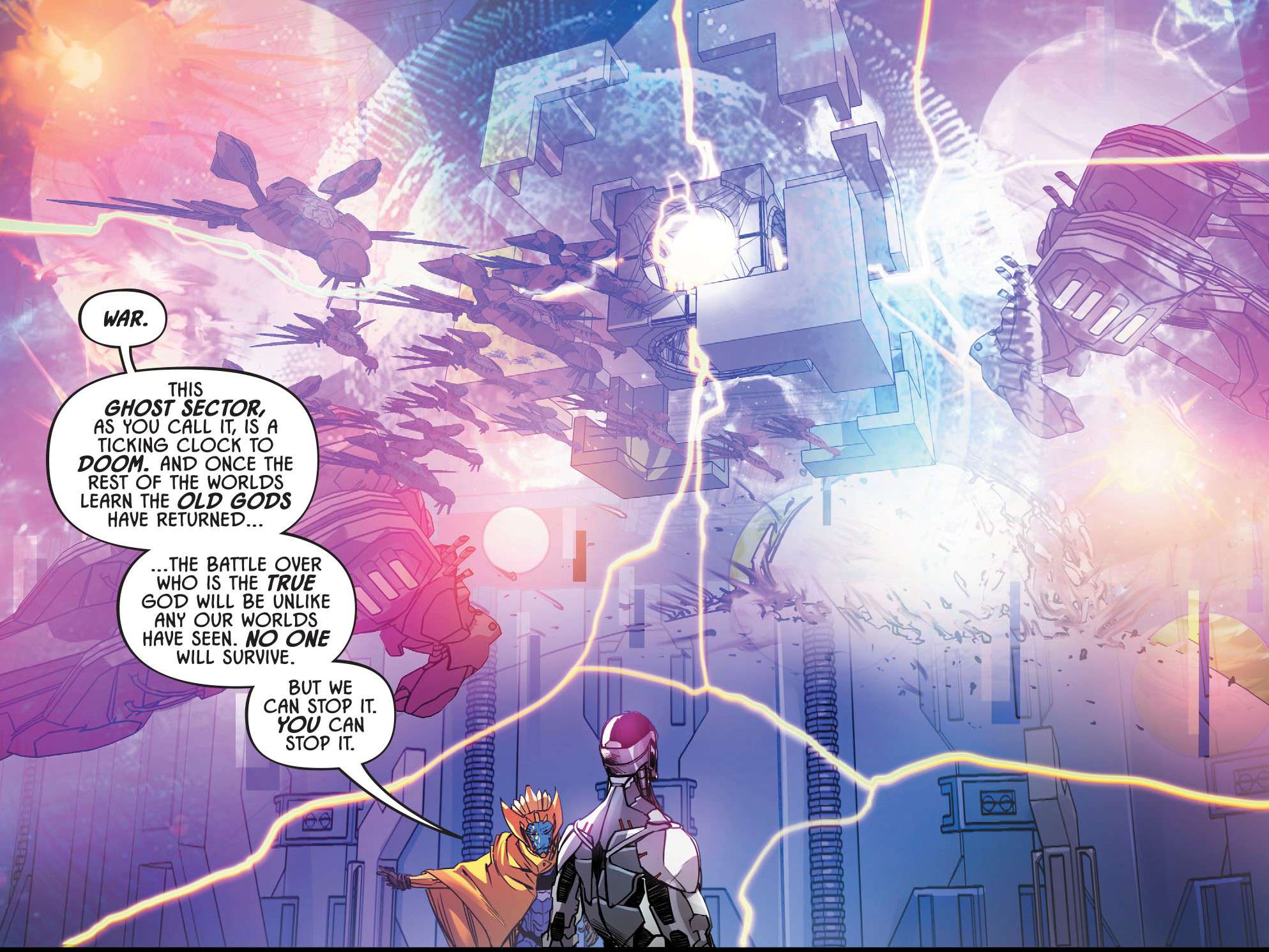 There are several of overarching themes, but none more prevalent than  The Coluans’ plan representing the ultimate in atheistic authoritarianism versus Rapture and his extreme zealotry. Science fiction has often been a conduit for exploring broader themes in an analogous fashion, and writer Josh Williamson is following that grand tradition with aplomb. Both the Coluans’ and Rapture’s methods lead to kinds of death, literal in the latter’s case but a far more sinister death of individuality in the former’s. This in and of itself is quite a comment on the nature of religion in general.

As the book reaches its climax, there’s also an ascending/descending theme. After Cyborg feels compelled to join with the Mother Box to learn the Ghost Sector’s secrets and how best to defend it, Williamson and artist Di Giandomenico juxtapose that with Darkseid’s descent as he swims to retrieve the secret Other Box weapon he hid away years prior. There are several ways this could be interpreted, although personally I like the idea that the notion of ascent – something generally associated with positivity and moving on to better things, and descending, which is the opposite, can both ultimately lead to negative results despite intent. 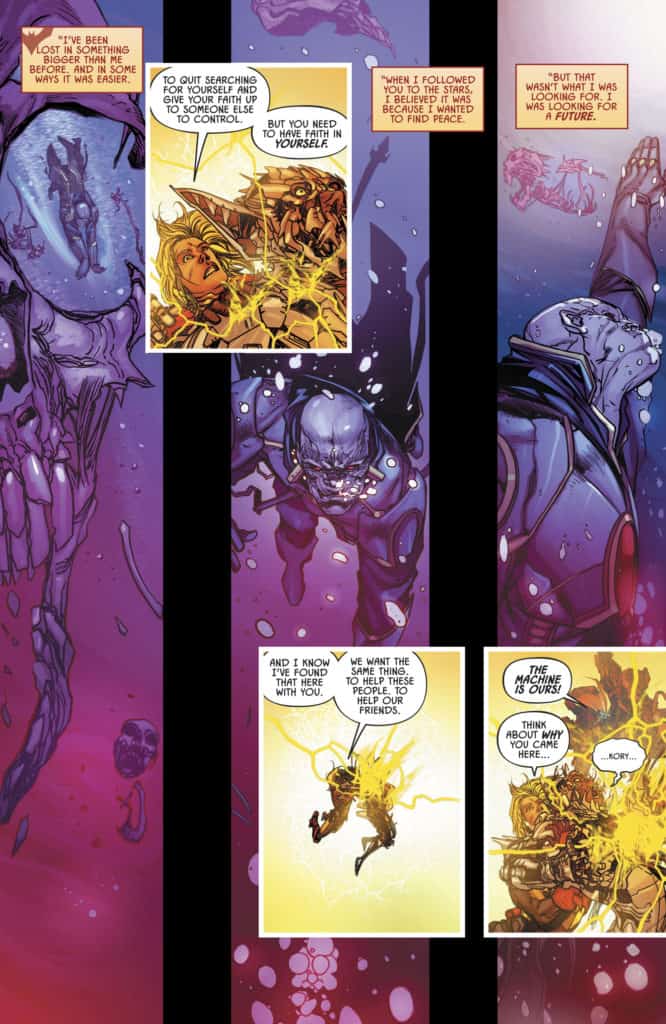 The through-line between the two is Azrael, a character steeped in religiosity, faith, and lack thereof. It’s interesting to me that this character is one who brings balance to the dual situations.

Fortunately, those heady themes are balanced by some robot-fightin’! Scenes of characters fighting nondescript villains can get tedious pretty quickly, so it’s fortunate that Williamson doesn’t linger too long at any of them (Cyborg gets his own giant mech to fight later in the book.) But they do make a lighter-weight counterpoint to some of the heavier thematics at hand.

The art team is on fire. Carmine Di Giandomenico shows that he’s more than capable of carrying the load here, and he’s extremely well-complemented by colorist Ivan Plascencia. Plascencia in particular truly shines here, maximizing the effects of his digital coloring to their utmost. Generally speaking I’m not a huge fan of digital separations or coloring, but I can’t deny the effect here is, for lack of a better term, effin’ awesome. 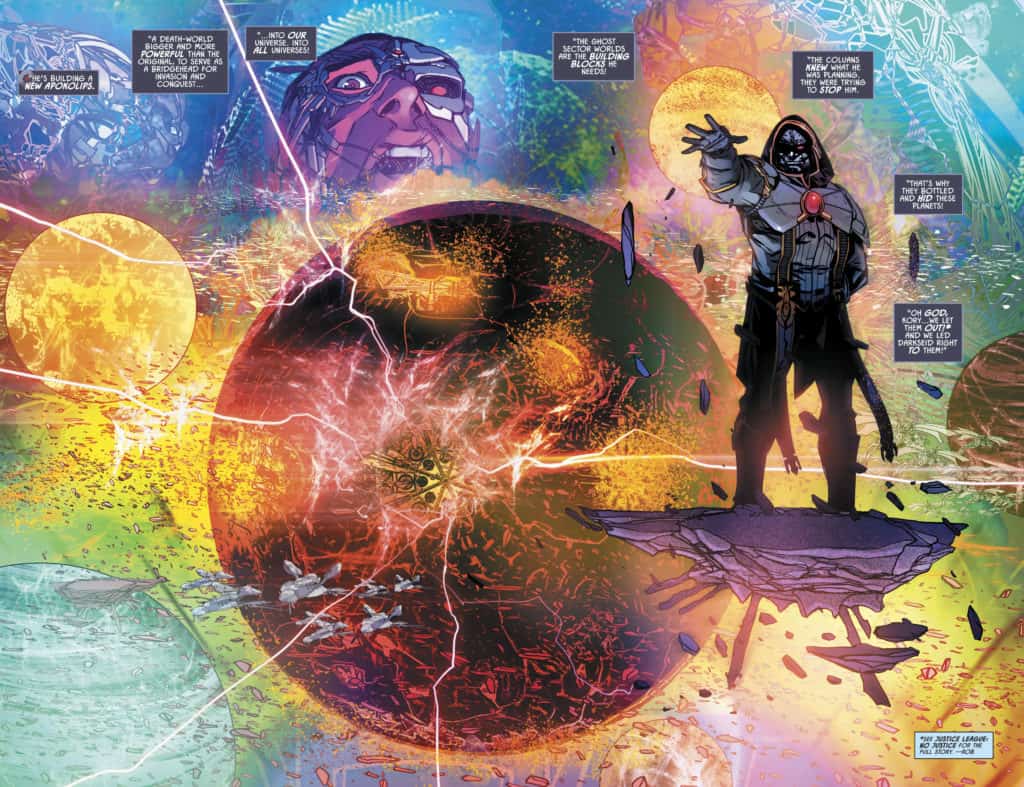 Now, in fairness as a reviewer, I have to have some qualms, and in this case, it’s Sexy New Darkseid. I’m not a fan of of sleek-like-a-gazelle new look, which seems to betray the traditional impact of the character’s striking visual power. But more importantly, I’m not a fan of how he’s being written, which is more attuned with Thanos than Darkseid. (Which is all the more glaring due to the fact that Thanos was created at Marvel as a direct response to Darkseid.)

Thanos gets in the thick of things, he acts, he fights, he directly confronts. Darkseid, on the other hand, generally acts through intermediaries, and is a more pervasive influence that hangs over the proceedings than someone who leaps into the fray. Thanos is a foe who can be fought hand-to-hand and defeated. Darkseid is. And the notion of writing Darkseid as though he were Thanos – a move no doubt fueled by the latter’s pop-cultural saturation in recent times – is a betrayal of not only Jack Kirby’s original intent for the character, but the way every other writer has handled him since.

After a shaky start, Justice League Odyssey is really starting to go places. I'm excited to see where it heads!