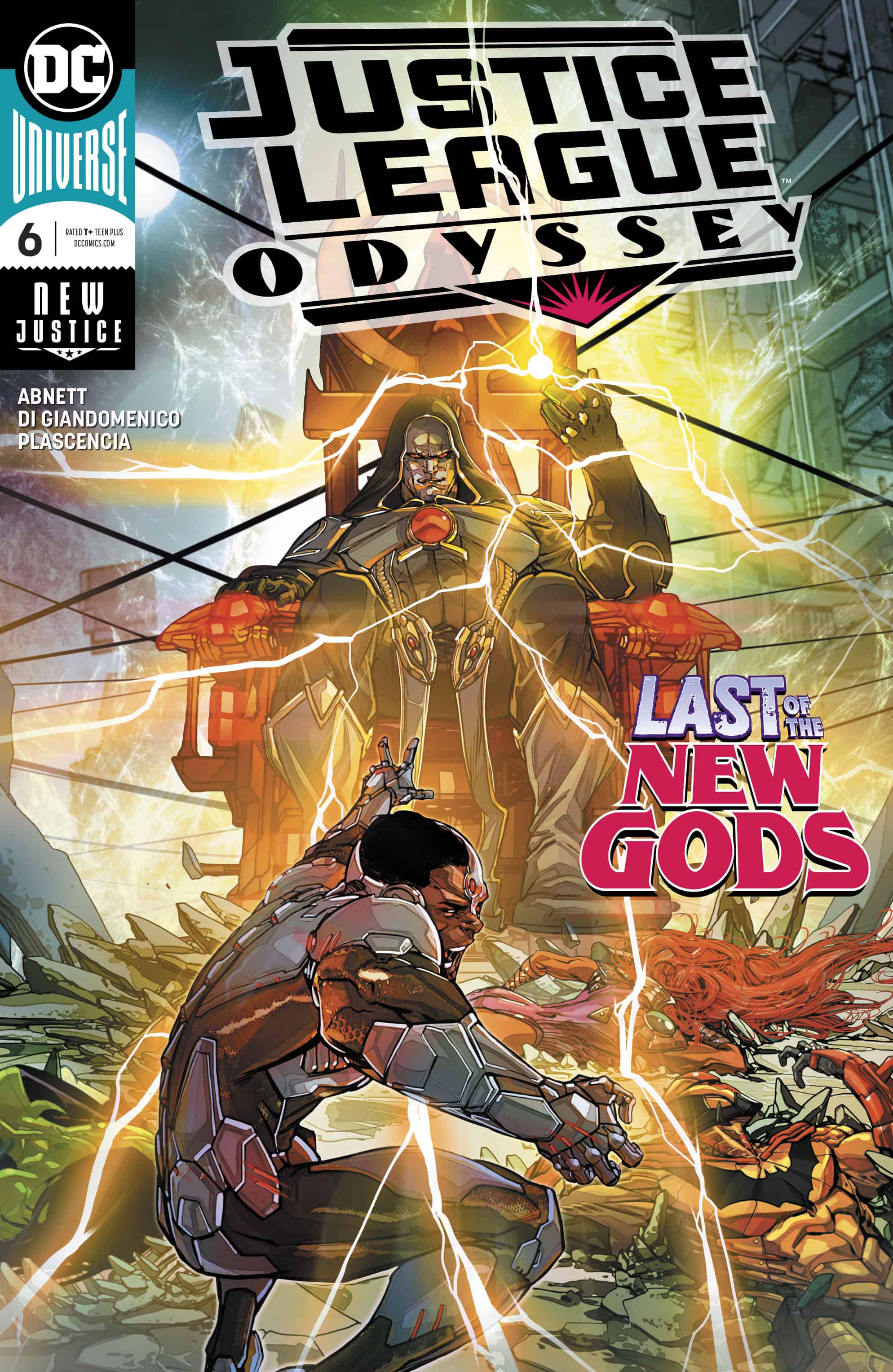 Things get worse for the ersatz Justice League not-a-team: stranded in the Ghost Sector and unable to summon help, they follow an increasingly-irrational Starfire to her homeworld Tamaran. Unfortunately, they wind up crashing on it instead of landing after being buffeted by a storm of cosmic rays! 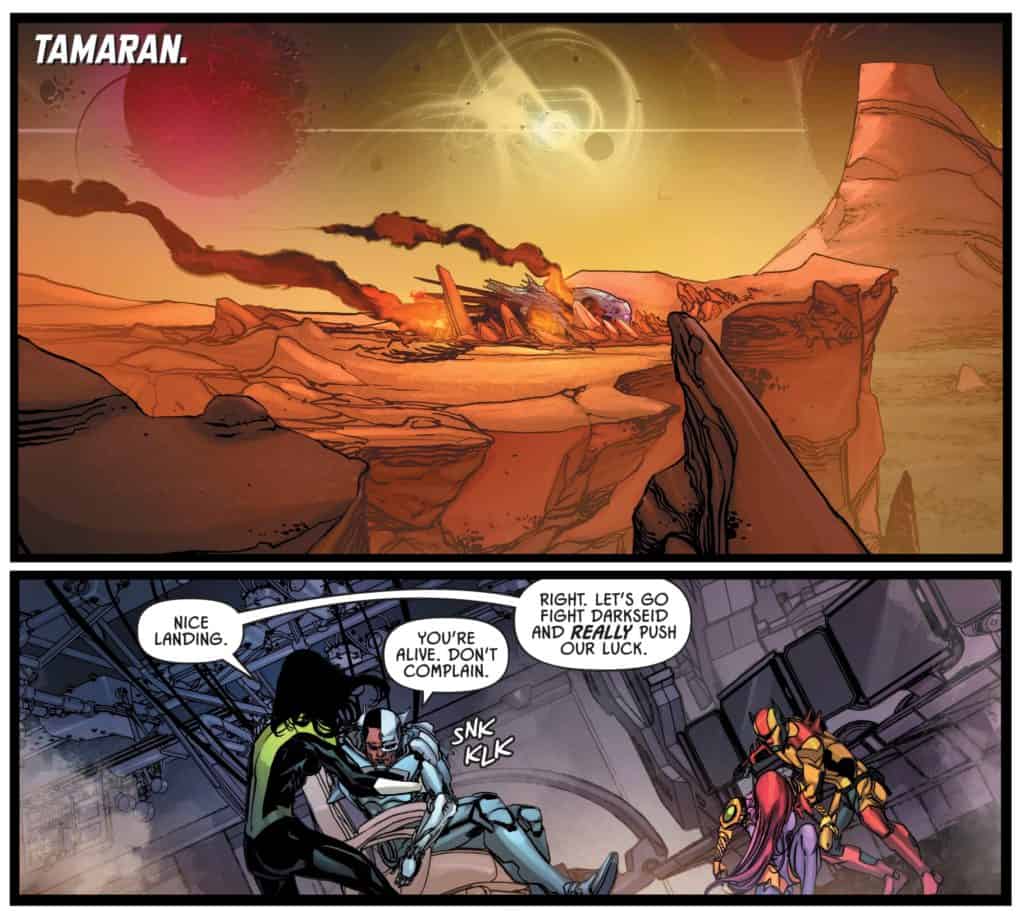 Things don't get any better when Jessica Cruz reveals a dire secret... 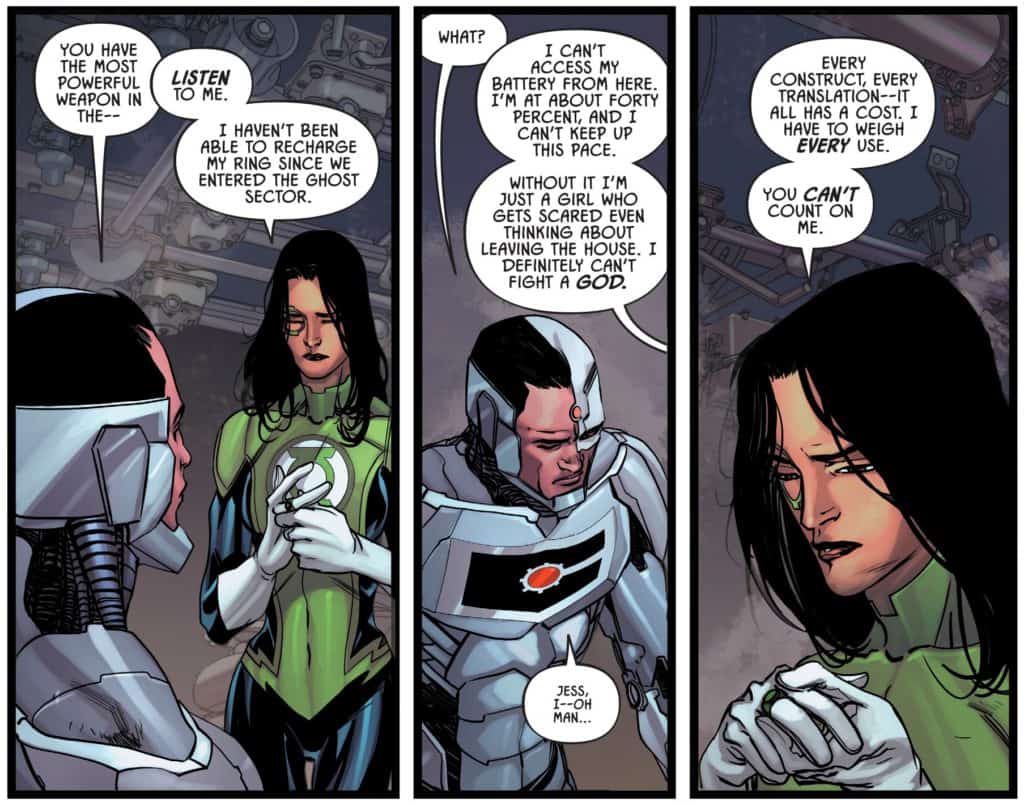 ...And Starfire discovers that amid Tamaran's ruin, her sister Komand'r has taken over - and she doesn't take too kindly to Kory and her friends being worshipped as gods! 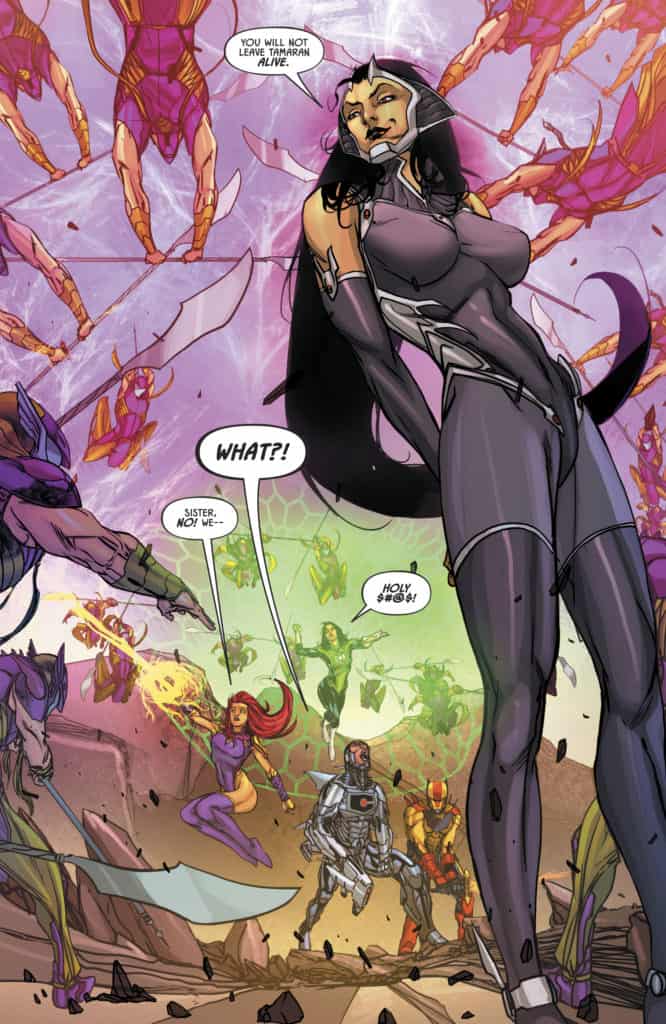 Elsewhere in the Ghost Sector, Darkseid continues his quest to build a new Apokolips, and is met with some fierce resistance! 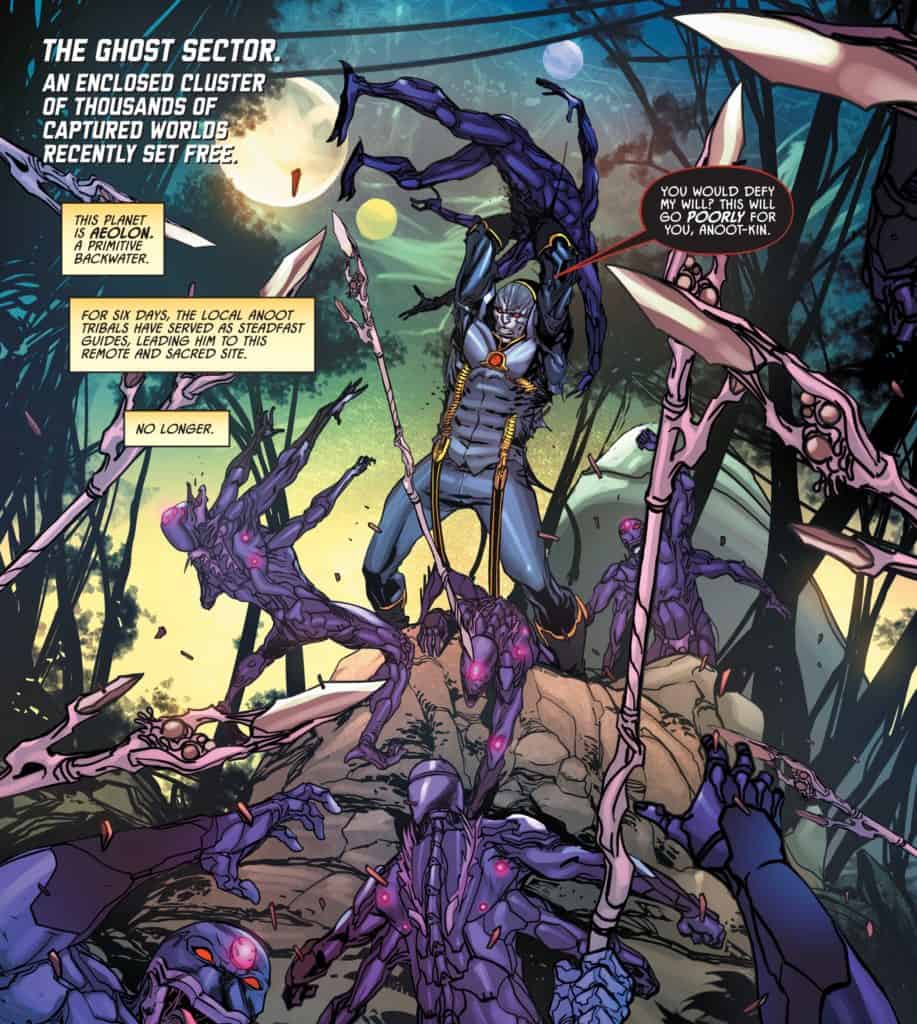 But he soon discovers the existence of something that chills even mighty Darkseid to his bones... the Eskaton - prophesied to pick the bones of the Fourth World gods once they fell! 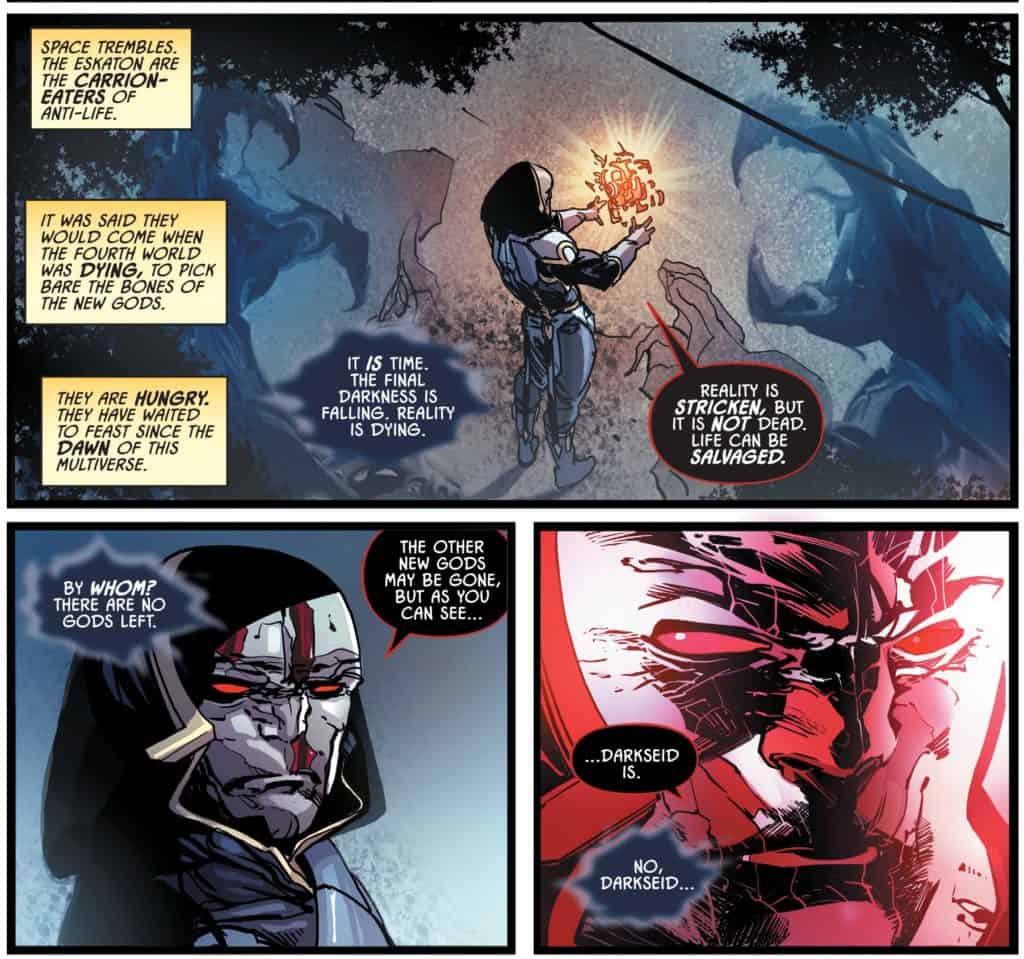 Writer Dan Abnett arrives to take the authorial reins from the departing Josh Williamson, but the result is negligible at best. Thus far in the series, this hodgepodge group of heroes have been reacting to one crisis after another, heroing their hearts out but without a solid footing as to why readers should care in the first place. Abnett, though a seriously talented writer, doesn’t rectify the situation right out the gate, but to his credit he does highlight some strong character beats to get readers better invested.

Internal debate over whether or not they should follow Starfire to Tamaran or instead find and defeat Darkseid showcase Cyborg’s assertion that they are not a team, but deliberately leaves the door open for that moment when they are. (Their “Avengers assemble” moment, if you will.) Cyborg is really starting to shine as the de facto leader of this rag-tag gang, stepping into the role with relative ease. DC has spent a lot of time this decade convincing readers that Cyborg is a first-tier hero on par with Flash or Green Lantern, and that effort shows. Vic’s leadership role here feels effortless and even natural. 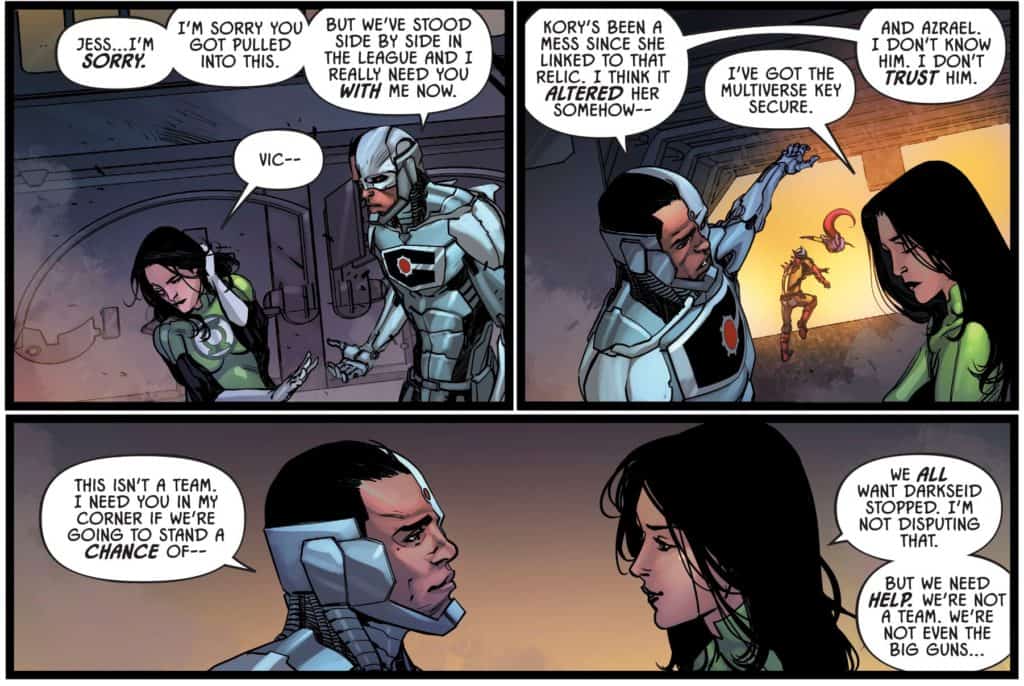 Similarly, Jessica Cruz shines as Abnett is given the opportunity to showcase her vulnerabilities and self-doubts. Some readers may not know this, but Jessica is agoraphobic, and even though she’s overcome those fears they always rattle around in the back of her mind. And the reveal that she can’t access her power battery for a ring recharge adds a suspenseful ticking clock that casts a shadow over every scene in which she powers up.

Cyborg insists that Starfire hasn’t been acting right for a little while now, but I’m less sold on the evidence of such. She’s acting headstrong and impetuously – but isn’t that who she is regardless? It’s an instance of a writer really wanting us to believe something because we’re being told it, rather than providing solid evidence of it. Starfire’s supposed “out of character” behavior really only serves to get the group to Tamaran, something that probably would have happened anyway. 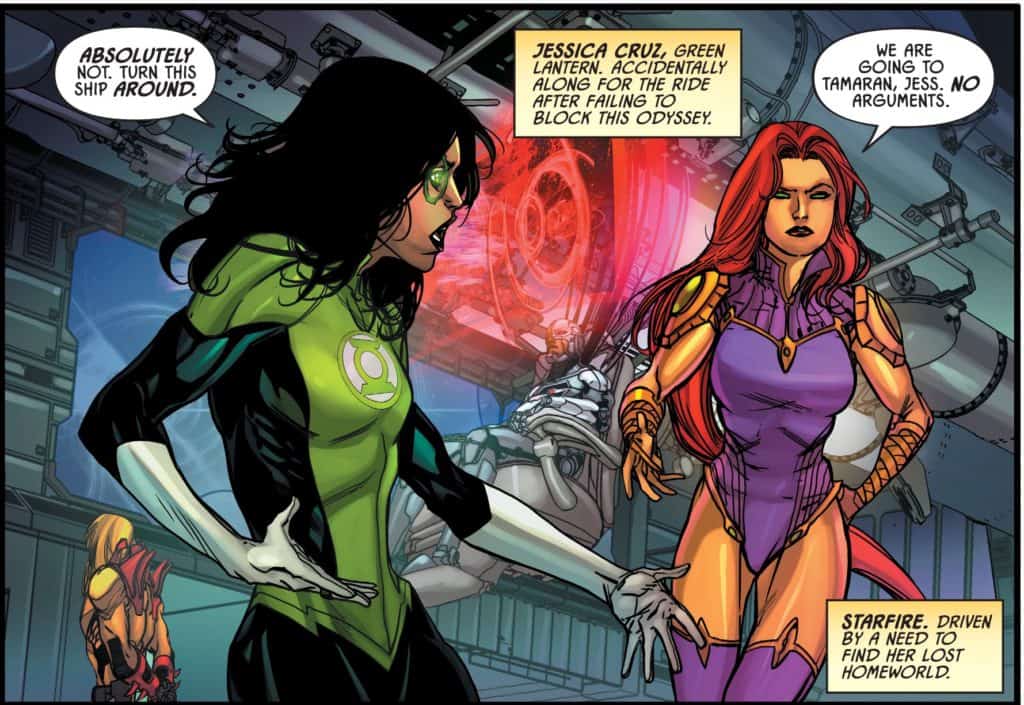 And what about Azrael? He literally does nothing this issue. He’s just sort of lost in his own headspace, making a generalized proclamation once and having aspersions cast over his trustworthiness by Cyborg later on. I’d think that he’d perhaps have some rumination over last issue’s revelation that his followers are some sort of a death-cult, but maybe that discontinuity can be chalked up to the change in writers.

But hey, let’s talk about that art! As I swooned in my review for last issue, Carmine Di Giandomenico and colorist Ivan Plascencia make an eye-poppingly great art team. I genuinely believe that this is the book they were born to work on – together, they really make every page shine, and Plascencia’s ability to render the awesome wonders of space at every turn is utterly gorgeous. If he hasn’t won an Eisner, he truly deserves one. 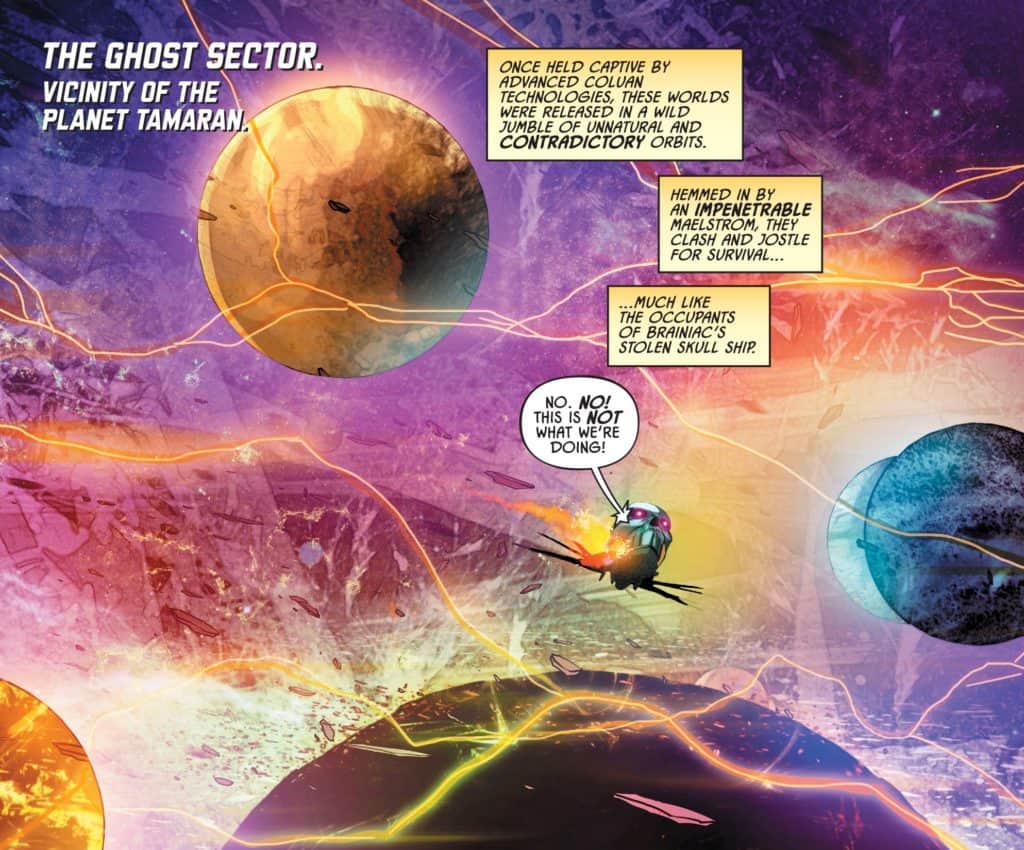 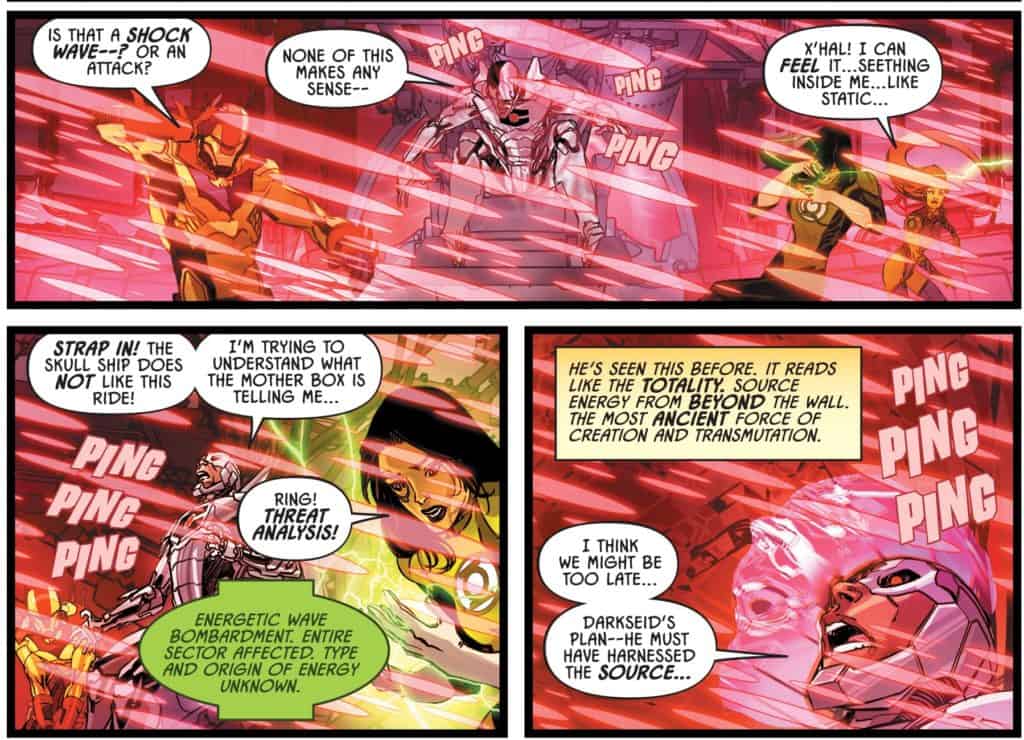 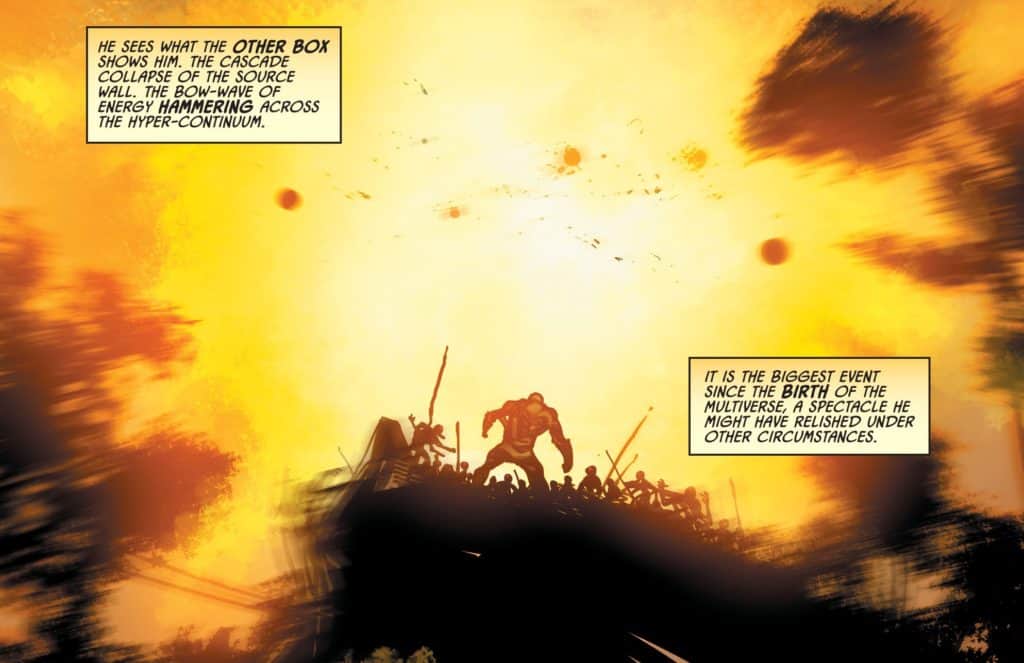 Some samples of Di Giandomenico and Plascencia’s stunning art.

Ultimately, this issue continues to highlight Justice League Odyssey‘s recurring issues with lack of focus. The characters are just sort of bouncing around from one emergency to the next, with their only heading being to stop Darkseid from completing his nebulously-defined mission. Throwing everything and the kitchen sink only gets you so far if your story, in the end, winds up being a hodgepodge rather than a sum of all parts.

While I can't say this issue was bad by any means, JLO has foundational issues with its core conceit that underscores even its best intentions. Where these characters are going, why readers should care about them, why they're even together - these are flaws that no change in writers may be able to overcome. While on an issue-by-issue basis there's fun to be had and some strong character beats, something needs to snap into place fast or this book may be doomed.