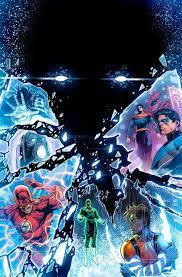 The Justice League is dead, and a universe mourns... while impending doom lurks on the horizon.

Justice League: Road to Dark Crisis is a comic that feels a lot more perfunctory than it does sincere in its attempt to bridge the gap between the fall of the Justice League and Dark Crisis itself. Five stories that are roughly analogous to the five stages of grief (denial, anger, bargaining, depression, and acceptance, though not necessarily in that order) all aim to convey the various legacy heroes of the DCU as they process the trauma of the League’s demise, but all but one feel half-hearted in their attempt.

The real problem is this: we, fandom, knows the League isn’t dead. Justice League #75 was perhaps the least convincing death of major characters since Johnny Storm got eaten by space bugs off-panel in Jonathan Hickman’s Fantastic Four run. Compounding the problem is the inherent disconnect between these events and the fact that every single one  of the Leaguers’ titles are still chugging right along, as if taking place in a wholly different reality than those portrayed here. It’s not like, for the duration of this event, Batman or Superman or Wonder Woman are just going to suddenly stop appearing in their respective comics. Clark is still on Warworld; Diana just victory lapped the Trial of the Amazons, and Bruce is off in a dozen different stories doing Bruce things. The conceit of Dark Crisis is about the next generation of heroes stepping up, and while that’s great on paper, it’s also reliant on an enormous leap of faith that readers are going to feel the same grief they’re feeling, and if that’s the aim of this one-shot, then Dark Crisis may be doomed before it even begins.

Take the lead story starring Nightwing and Jon Kent, for example. Jon comes to Dick for reassurance in the face of his father’s demise, and instead of comfort, Dick uncharacteristically offers a “hey, heroes die all the time and come back” brush-off. Not only is that wildly off-brand for Nightwing and makes him look like kind of an unfeeling jerk, but it also doesn’t do anything to move his or Jon’s emotional arc forward. Instead, there’s a pat ending where Dick admits he approached the situation wrong and they fist bump. This story might have been right at home in an ’80s comic during a simpler time, but it just feels archaic in its approach now. It certainly doesn’t help that Dan Jurgens’ characters throughout are stiff, lifeless, and in Jon’s case, completely off-model.

And that’s more or less how it goes throughout the rest of the issue: overtures are made toward a sense of grief we’re supposed to be feeling, but those feelings never feel sincere because we all know the Justice League will inevitably return, and probably at the end of Dark Crisis. That doesn’t bode well for the event, because that means there’s very little sense of actual buy-in for any stakes or sense of urgency in the storytelling. Maybe DC has played the end-of-everything Crisis card one time too many at last; or maybe Dark Crisis will be a heckuva lot of fun instead. Readers won’t know until the final issue drops in December. But if this one-shot is a bellwether of things to come, Dark Crisis is going to be a long, dark slog.

Justice League: Road to Dark Crisis tries and mostly fails to convince readers that the entire DCU is in mourning for the "deaths" of the JLA. At a $5.99 price tag, this issue is for completists only.