Justice League vs. The Legion of Super-Heroes #1: Darkness Falls (In More Way Than One) 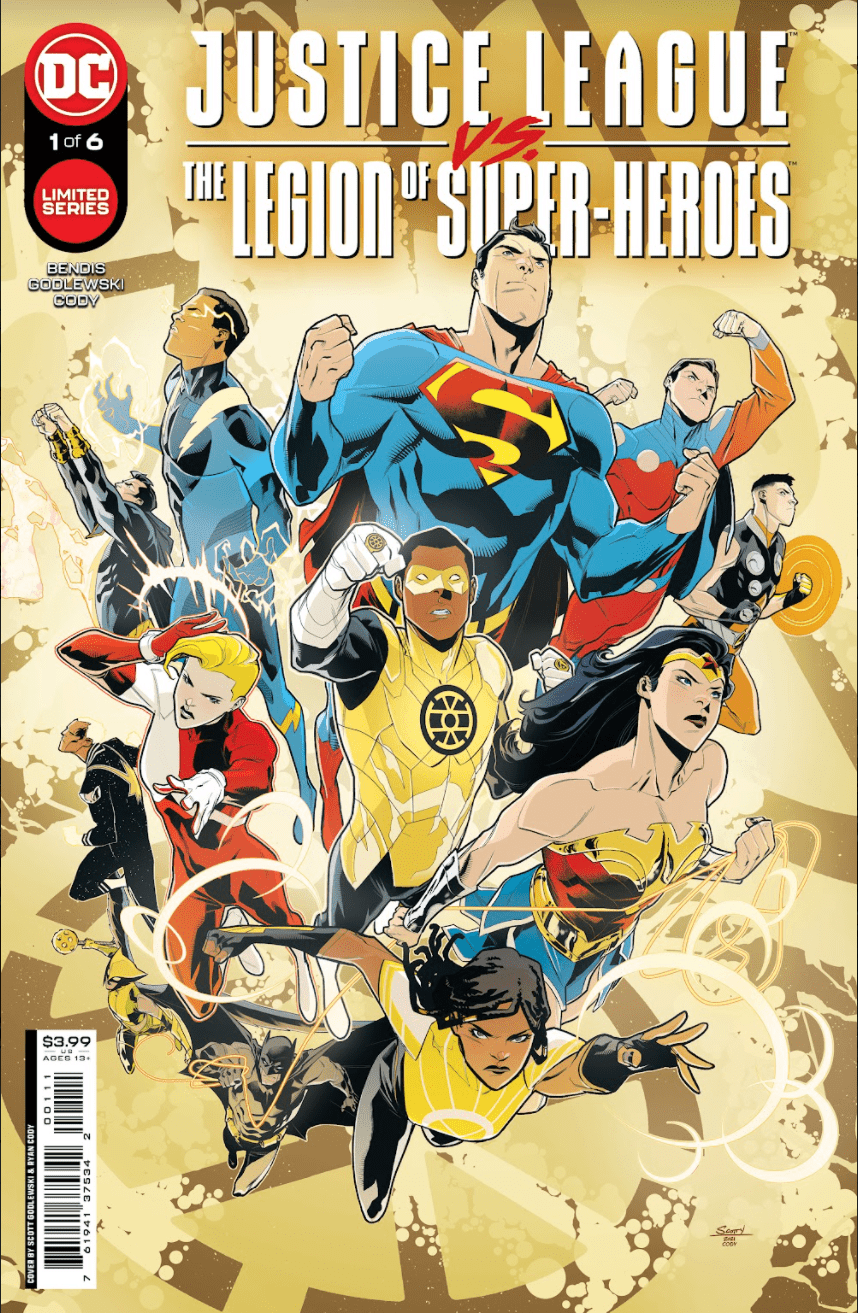 The Justice League protects the 21st century... and the fledgling Legion of Super-Heroes protects the 31st. But despite the millennium between them, a single destructive force threatens them both.

From the Truth in Advertising Department: first off all, there’s no “versus” between the Justice League and the Legion of Super-Heroes this issue. At least not yet. Sorry, sports fans, but you’ll have to look elsewhere for hot hero-on-hero fightin’ action.

Justice League vs. Legion of Super-Heroes gets off to a typically Bendisian start: lots of chatter, a vaguely-defined yet very real threat, and a well-intended mystery. The writer, known for his David Mamet-esque rat-a-tat-tat dialogue and decompressed storytelling, brings a story that deliberately evokes the classic Legion tale “Great Darkness Saga” (forty years old this year!), but unfortunately the slow-burn, underdeveloped nature of the menace only dilutes the potency of that original story’s memory. As above, that doesn’t mean the story won’t get there, but insofar as opening acts are concerned, JL vs. LOSH falls far short of its intended goals.

Bendis’s typically decompressed storytelling is the chief culprit of feeling like not much truly happens in this issue. The threat (well, a threat) is established – some unknown force pulls one-third of Triplicate Girl into the past and tries to do the same with Wonder Woman in the present. It seems similar events have been popping up throughout the United Planets’ jurisdiction, spurring alarm. The two teams come together and… talk. A lot.

What’s odd is that the title of this story doesn’t just imply but flat-out states that it’s about the Legion’s Gold Lantern, but the actual story itself does nothing to move that plot point forward. It doesn’t help that Bendis gives readers no reason to care about Gold Lantern as a character – his dialogue, completely interchangeable with anyone else’s. Who is he? What’s his story? What the heck is a Gold Lantern, anyway? Bendis doesn’t seem interested in answering any of these questions.

Artist Scott Godlewski, who accompanied Bendis for much of his Young Justice stint, does a passable job but that’s about it. His style doesn’t have much weight behind it, and would be better suited to a more light-hearted book than this one. That isn’t to say he’s a bad artist, just not the right one for this comic. An Ivan Reis-style artist who can really deliver big, wide-screen knockout moments would have really elevated JL vs. LOSH above its skimpy plotting defects.

The entire affair is reminiscent of Bendis’s recent Event Leviathan/Checkmate misfire, in which a decent idea was woefully undercooked. That seems to be a hallmark for the most part of the writer’s time with DC, in which his style has seemed out of place. This isn’t entirely his fault – nearly two decades spent at Marvel will create an unconscious connection to their house style, and the same could be said for any creator at either company. But that doesn’t change that this comic not only doesn’t feel like a sum of its parts – it doesn’t have that many parts to begin with.

Justice League vs. Legion of Super-Heroes #1 sadly falls flat on all levels, leaving me to wonder if maybe it isn't time for Bendis to fully return to small-scale, crime comics for a time to find his muse again. This is a comic that isn't worth the time of fans of either team.

Justice League vs. The Legion of Super-Heroes #1: Darkness Falls (In More Way Than One)