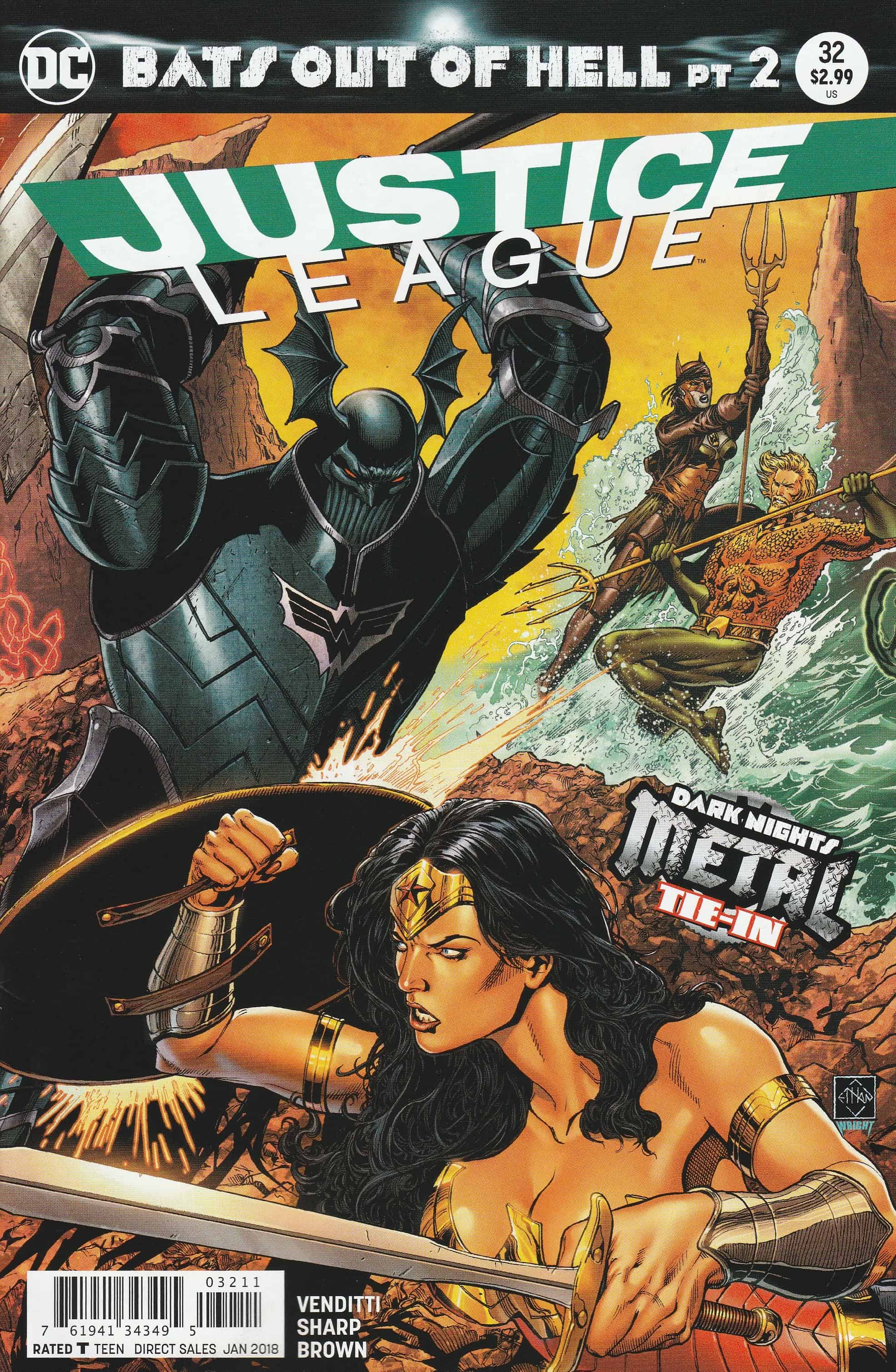 The League is separated, trapped in various caves, having to face off with dark versions of a man they all trust…and they may not make it out alive!

The Dark Nights, evil versions of Batman, have invaded Earth-0.  Cyborg was one of the first of the Justice League attacked and the only one to not get away.  The only thing that can stop them is Nth Metal and the Justice League have split up to find the only remaining stores.  Dividing into pairs, however, did not help them as four of the core members, Flash, Aquaman, Wonder Woman, and Green Lantern, were captured and deposited into caves beneath cities.

The League is being watched by Cyborg, who feels helpless as his team is separated and attacked.  Flash encounters the Red Death underneath Central City who taunts Barry, showing off his “Flashmobile”.  But the Red Death is a billionaire.  Flash doesn’t have to outrun one car.  He has to outrun FIVE.

Aquaman is trapped underwater, in a cavern beneath Atlantis.  He cries out in anger but as he calls to the sea life, he realizes that the water is poisonous.  Then the Drowned appears with a horde of mutated sea creatures.  Aquaman begins to do battle when he realizes that the closest of the creatures, a weird distorted giant hammerhead shark, is actually his wife Mera.

Underneath ARGUS in Washington DC, Wonder Woman comes face to face with the Merciless.  He declares his love for her…in an odd sort of way.  He seemed to miss her at one point, but no more.  Now he wants her dead.  He even surprises her by knowing a fighting move that only Wonder Woman could have taught him.  Then, he reveals something else.  That on his world, he did battle with her people and slaughtered every last one of them, but he prevented them from entering Elysium.  Instead, he trapped them inside a giant coin and he has stored away in this cave.  And with a single strike of his hammer against the coin, the zombie-Athenians leap out to attack. 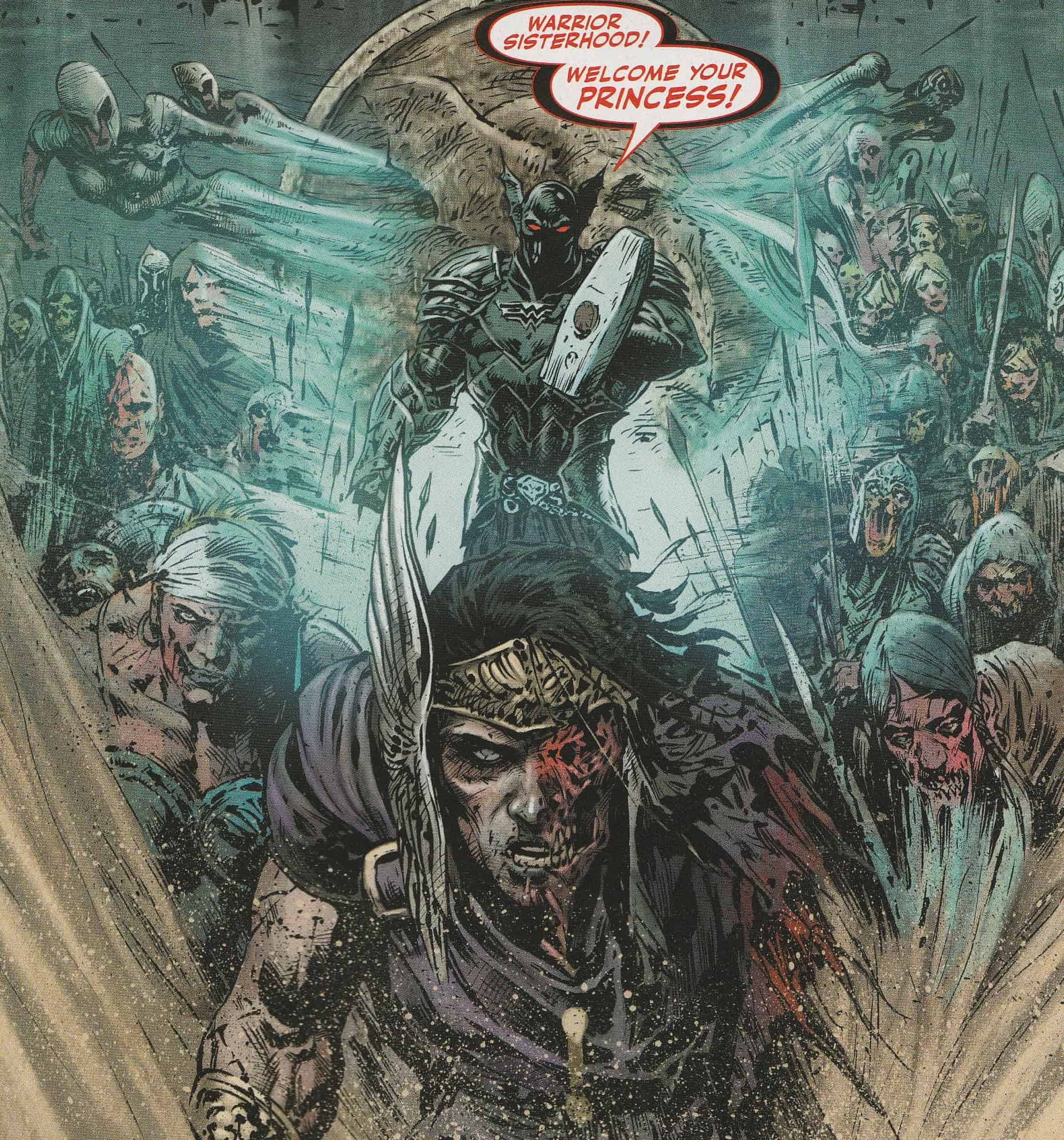 And finally, Green Lantern is in complete darkness beneath Coast City.  And the Dawnbreaker is waiting for him.

Overall, this is both a huge relief and a mild disappointment to me.  I know, it’s a bit of a contradiction so bear with me.

I’m glad to be past the Hitch era.  So to get a new writer and artist (and the art, while not top of the line, is a definite improvement) is a big step in the right direction.

That being said, it’s not all perfect (even if it is all an improvement).  The story, unfortunately, plays out like a standard action comic, not really giving us any shocks or wow moments.  Heck, even the last panel, where we find out Cyborg is being used by Barbatos’ crew against the League isn’t much of a surprise.  I mean, he was the only one who was captured.  And we see him at the beginning.  And it doesn’t seem like he does Barbatos a whole lot of good.  There isn’t any part of this that leaves me thinking “wow, how in the world did the Dark Batmen know this?  OH, Barbatos is using Cyborg!”

We also don’t get much in the way of each character.  The Justice League comics work better when they are as a team because otherwise, there’s just too many of them to really focus on each one individually, to give us the emotion that a character’s single title could do.

And…yes, I’m going to nitpick…but Mera was scarier when she was a zombie as opposed to a giant mutated fish creature.

Still, it wasn’t a bad book to read.  The narration from Cyborg’s point of view was great, but like I said, I think that should’ve been a surprise at the end instead of knowing right away.  To read everything and to think that it’s just standard narration or maybe the One Who Laughs and then to find out that Cyborg is watching the whole thing?  Whew.  That would have made for a better ending and overall book.

But Dawnbreaker showing up at the end…we knew it would happen (after all, the other 3 had encountered their mirror versions) but for him to interrupt Green Lantern’s Oath, appearing behind him in the darkness?  Yeah, that was a nice way to end it. 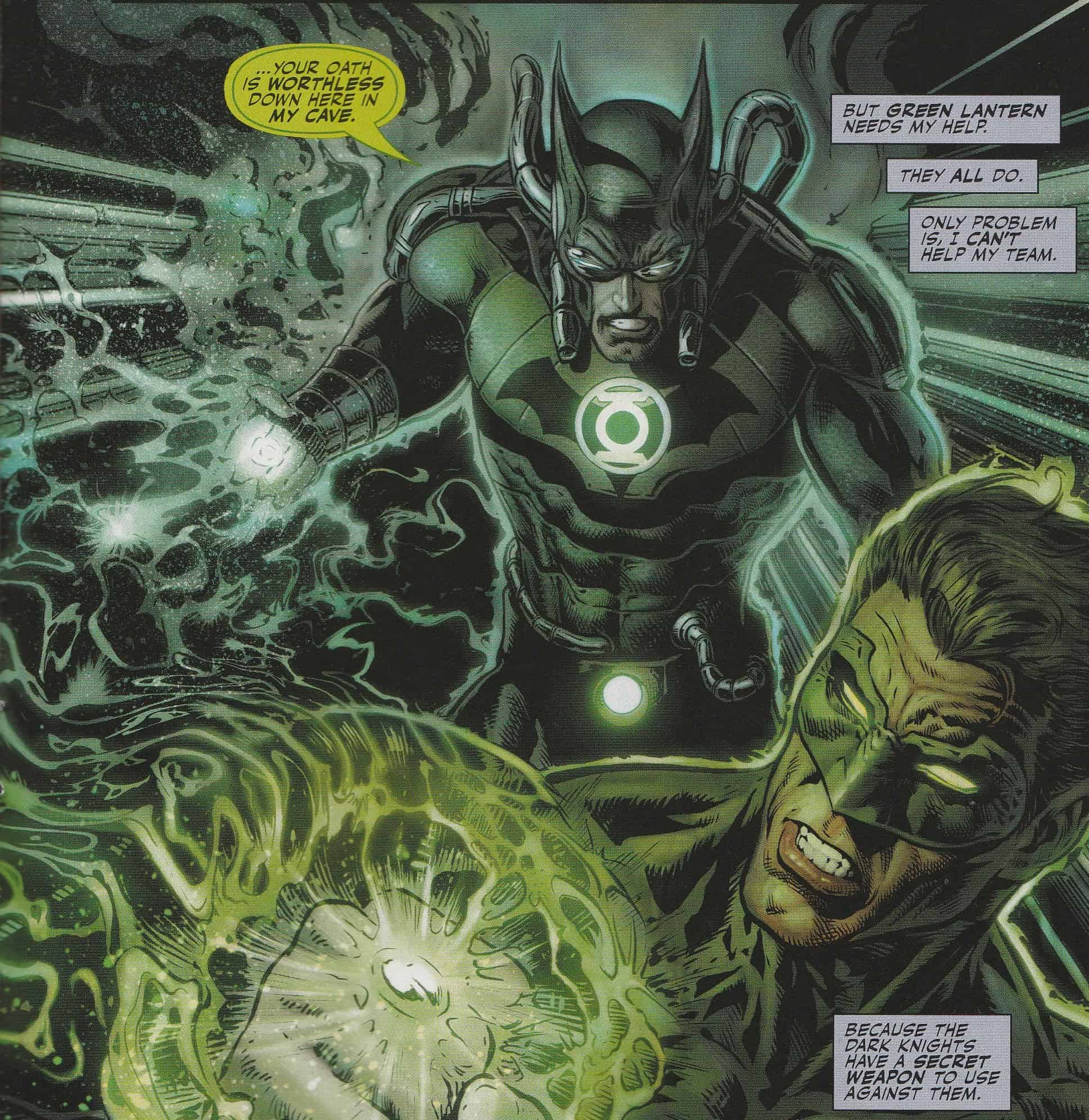 Final Thoughts:  Could’ve been stronger.  Made some missteps.  All in all, a slightly above average book.  If you’re not already reading Dark Nights Metal, you can skip it, but if you’re a fan of all things Metal, then this book is definitely worth reading.