Batman is worn out and that weariness is going to lead him to make mistakes.  The problem is, that mistake will come at the worst time as the League faces three major crises simultaneously. 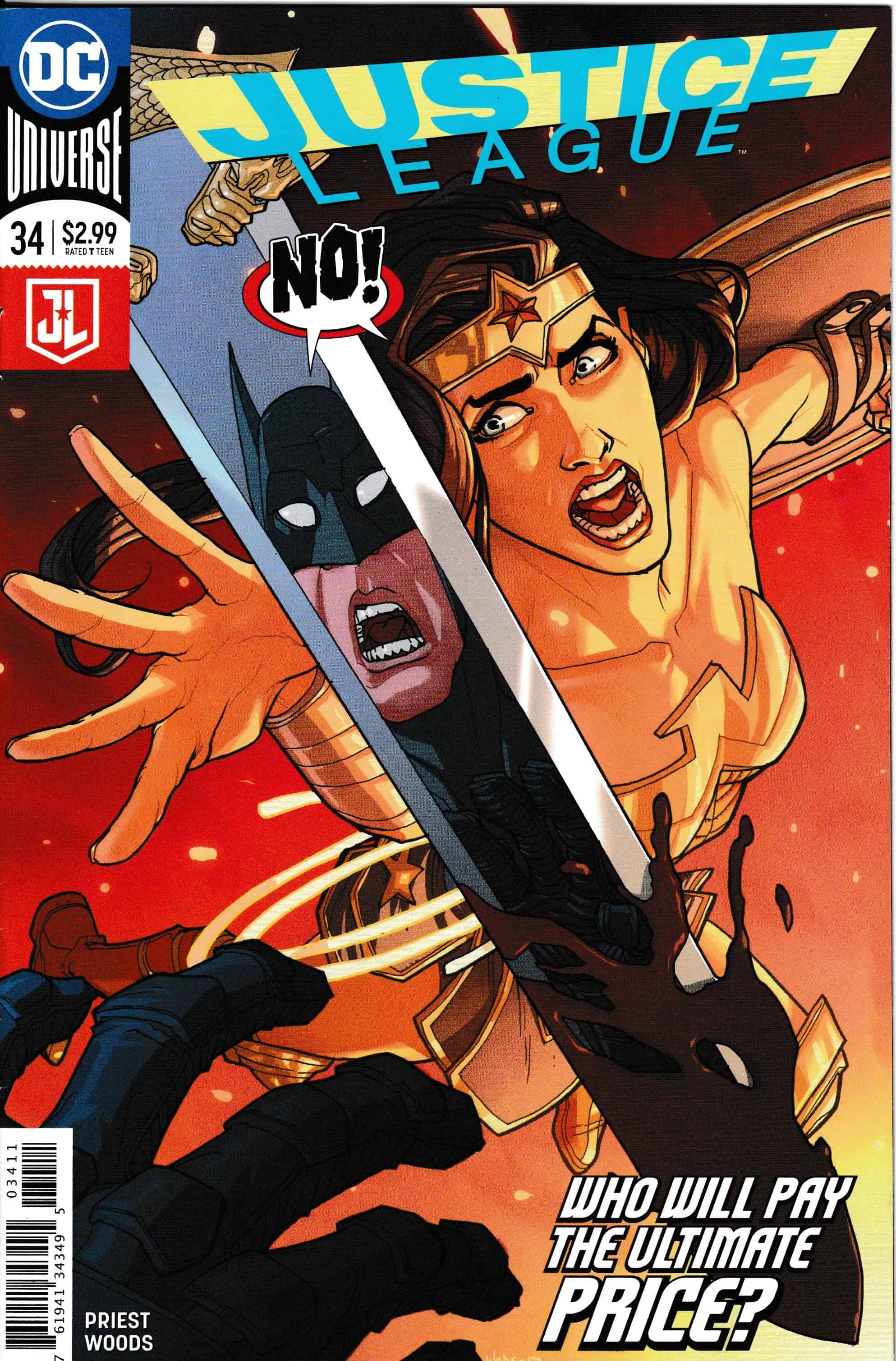 New writer, new start.  Everybody knows who Batman, Superman, Wonder Woman, Aquaman, and the Flash are.  Most probably know about Cyborg.  Otherwise, there are two different green lantern members on this team:  Simon Baz and Jessica Cruz.  That’s it.  Nothing else to know about this issue.

On a moon of Saturn, Dione, a man is praying to Mecca (although considering that he has to pray in a specific direction towards a location hundreds of thousands of miles away on Earth, it makes little sense).  Inside a nearby dome, a little blue guy gets an alert and rushes out to warn the man.  The man takes off his mask to reveal himself as Simon Boz, a Green Lantern.  He flies off into space and contacts the other Lantern patrolling this sector:  Jessica Cruz.  But she’s on a date.  Just then, Simon finds the reasoning behind the alert:  an armada of space craft are heading towards Earth. 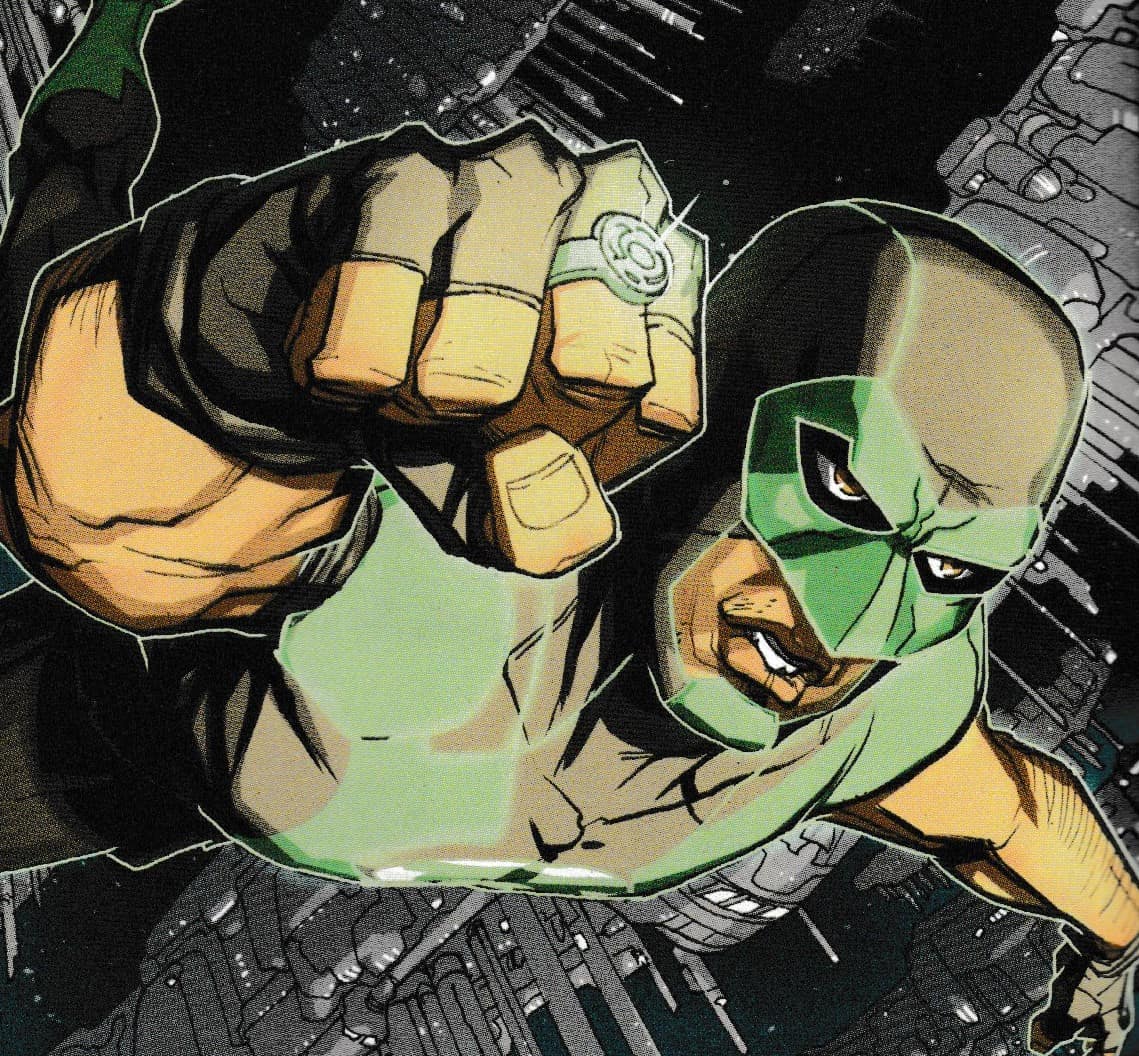 Inside Wayne Manor, Alfred walks in on Bruce, still groggy from barely any sleep, waking up on the stairs.  He’s been at it for three whole days but no rest for the weary, as an alert, signals that he’s needed on the Watchtower.  He promises Alfred he’ll let someone else handle it but he still has to get up there to assign duties.  Cyborg explains about three different crisis happening:  nuns being held hostage by terrorists, an earthquake leaving thousands trapped, and a space armada heading for Earth.

Batman orders Jessica Cruz to meet Superman and Flash at Corona Del Mar to help those trapped by the Earthquake.  He, Aquaman, and Wonder Woman will rescue the nuns.  And it’ll all be in time for everybody to join Simon in fighting off the spaceships.

As the crew in Del Mar help out, Jessica relays communication from Simon (who isn’t even under attack yet) to Batman but Batman, who is monitoring the terrorists, tells him to hush up as he’s trying to concentrate.  Aquaman is driving a bus around and around the building so that they can scan for explosives.  Wonder Woman is outside, posing as a delivery woman.  She urges a couple of girls to get inside but one drops her ball and chases after it into the street (dammit, do these parents not teach their kids?) right into the path of the bus.  Aquaman swerves, crashing the bus into cars, as Wonder Woman makes her move, attacking the terrorists before the FBI can make their raid.

As Aquaman is talking to the man driving the car he crashed into, he vanishes in a white light.  Cyborg needed him in El Domingo due to problems with beached oarfish.  That’s when Batman realizes he made a mistake, not realizing that Corona Del Mar means “Crown of the Sea”.  So Batman agrees that Aquaman is needed and sends the heavy hitters into space.

But just then, the FBI moves in on the terrorists.  Flashbang grenades are tossed in the room but then something unexpected happens…  the room explodes.  The flashbangs exploded too close to one of the nun’s oxygen tanks.  This kills one terrorist but the other is alive and no longer subdued (a large explosion will do that).  By the time Batman gets into the room, he finds Wonder Woman protecting one nun, but the other is dead, a sword through her chest.

Meanwhile, in El Domingo, Aquaman and Flash successfully avert a tidal wave caused by another earthquake out at sea.  And in space, Superman, Jessica, and Cyborg catch up with Simon to fight off the alien invasion but turns out, they weren’t invaders…rather they were intergalactic travelers who made a wrong turn at Albuquerque.

The next day, Superman consoles Batman.  He messed up, knowing that the nun is dead because of him and his carelessness nearly drowned half a million people. 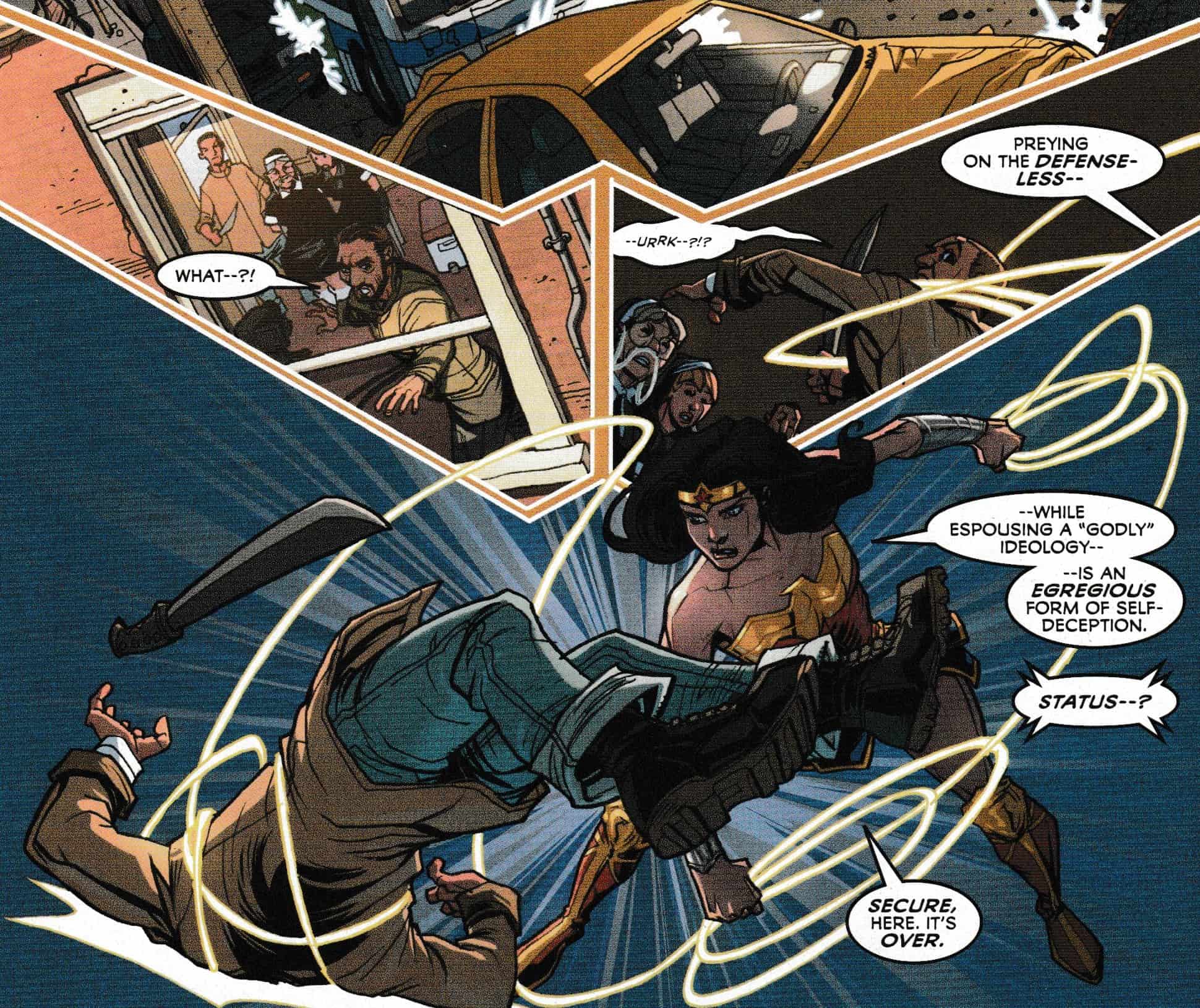 So, I’ve read this issue several times.  I’ve heard how good Priest is developing these characters, but I have to say…  this issue rivals Hitch’s last run as some of the worst League I’ve read.

The art is very bland.  It’s not horrible.  I’ve seen worse.  But it’s bleh.  Not exciting at all.  I’m starting to see why bi-weekly titles just aren’t that good (I’m not just complaining about League).  I mean, sure, you can sometimes get reasonable stories with good art, but that seems to be the exception, not the rule.

But the story felt almost pointless.  I mean, I’m not expecting a huge amount from the first issue.  I get that they have to build things up and Priest has some ultimate plan he’s aiming for.  But I just felt like I wasted my time reading this.  I didn’t get anything new out of the characters by the last page nor any anticipation for the next issue.  In fact, if I hadn’t read previews before this ever came out, I would have no idea what the point of this issue was.

And maybe that was the problem.  This arc is supposed to revolve around Batman being so worn out that he makes a major mistake which causes the public to turn against the League.  Right?

On top of all that, I wasn’t left waiting anxiously for the next issue.  A cliffhanger should leave you hanging, right?  But I got nothing from it.

Except nothing that happens in this issue is catastrophic enough to make me think it would suddenly break Batman.  Hell, I don’t even see what mistake he actually made.  A nun died.  True.  But when in the world did the League start taking care of small-time hostage crisis?  The FBI screwed up, not Batman.  If he hadn’t been there, it would’ve been the same (maybe worse).  And Aquaman?  Well, he did zero for the hostage crisis, so him teleporting away didn’t change a thing.  The tsunami was averted, thousands of lives saved.  So how does this break him?  The alien invasion?  Nope.

And we’re expected to believe that it took three days of nonstop problems to break the Bat?  Are you kidding me?  Do you mean to tell me that in 70+ years of comics, he’s never had to go three days with only an hour or so sleep?  Batman has been pushed way farther than this without failing.  Now maybe if we’d seen those three days, I could be led to believe it.  Maybe.  But instead, Priest jumps right into Batman being super tired.  It feels rushed and Priest is just hoping we’ll take him at his word for it.

Some of the little things in the issue I felt Priest and Woods did well, though.  I liked the addition of Simon Boz praying (it’s easy to forget he’s one of the few mainstream Muslim superheroes), even if it makes little sense for him to try and figure out where Mecca is when he’s on a moon of Saturn.  But…you know…comics.  And the bus Aquaman was driving seemed to be filled with civilians and my first thought was “why in the world are they going to put civilians in harm’s way” and then there’s a subtle scene where the people on the bus seem to glow (or even partially vanish) indicating they are computer generated images and not real.  The number on the top of the bus even changes so that the terrorists can’t figure out it’s the same bus going around and around.

But these little details don’t save what is otherwise a boring story.  At least Hitch gave us epic tales.  This was way too mundane for the Justice League.  And I get that Priest is going for a more personal story with the League.  But this just felt more like an issue of Batman guest starring the League. 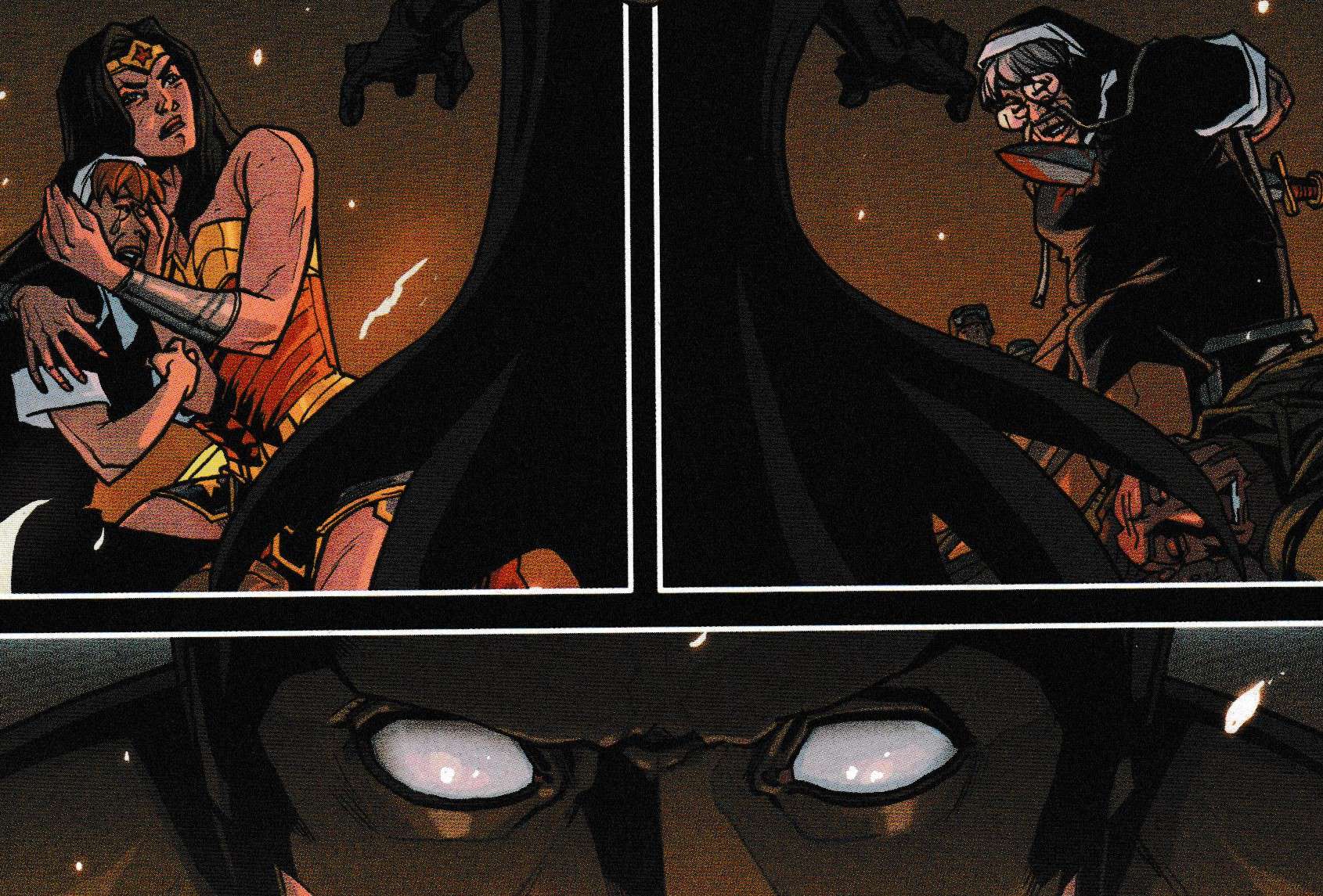 Final Thoughts:  A fairly uninteresting story does not bode well for Priest’s first arc.  I’ll give it a chance but if I weren’t so stubborn, I’d be dropping this title from my pull list.