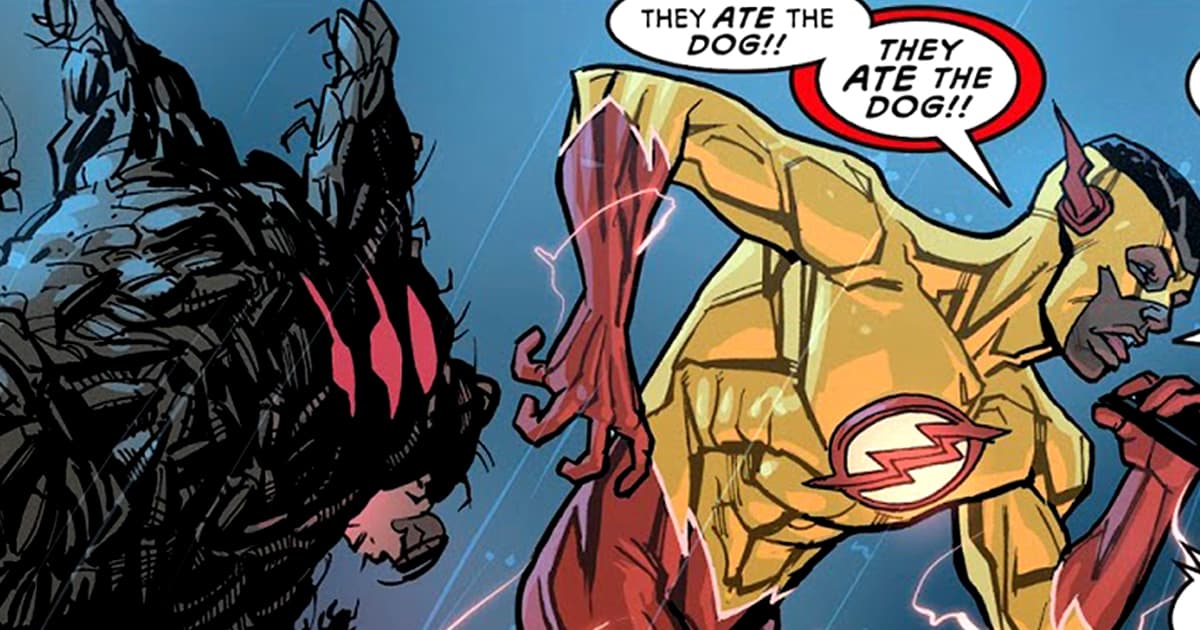 THE PEOPLE VS THE JUSTICE LEAGUE, PART 2:  following the disastrous outing of last issue, the Justice League must deal with the police who want to know what really happened.  Meanwhile, an infestation from space threatens a major city and the League has to somehow stop the cockroaches that won’t die! 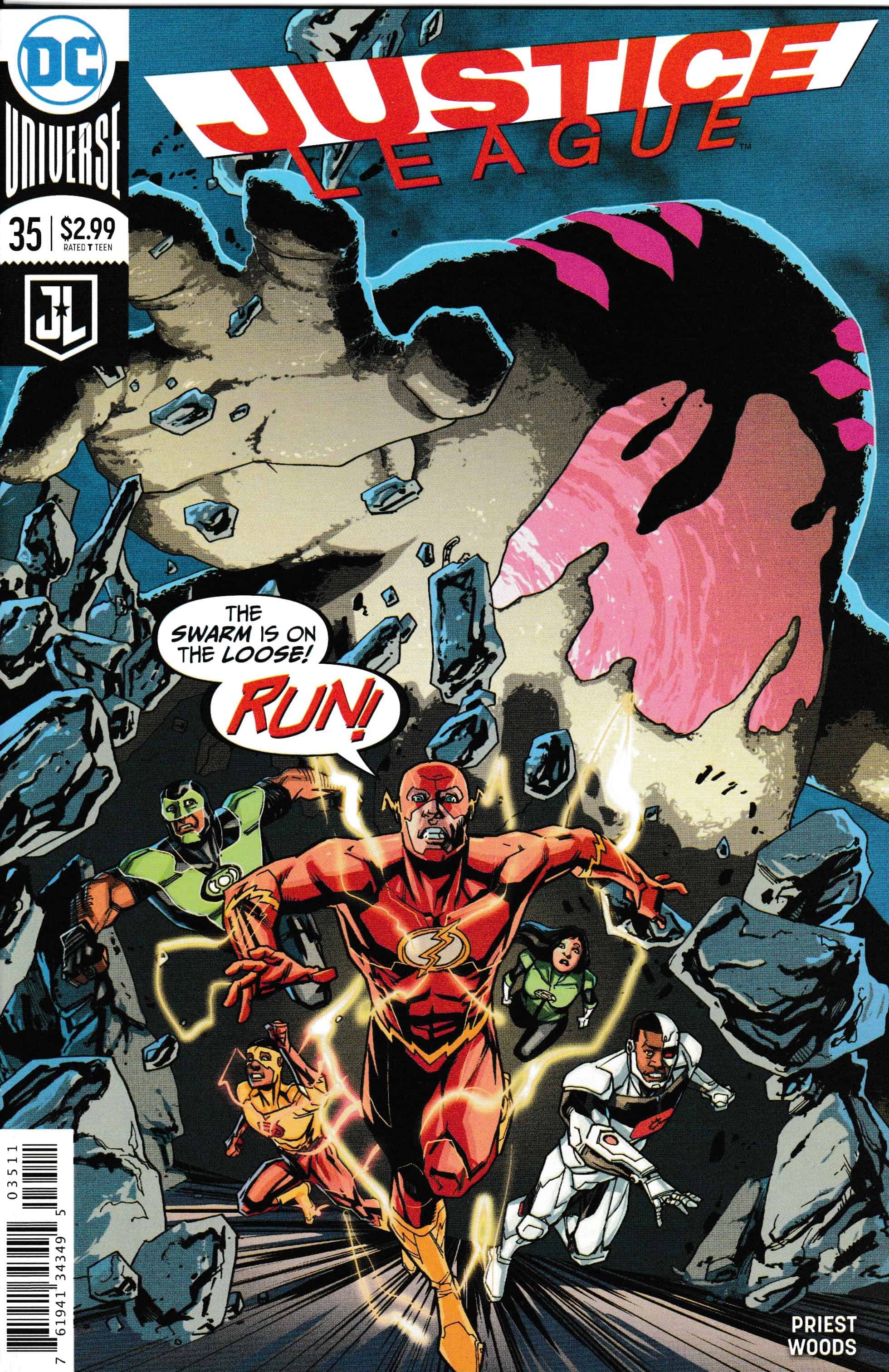 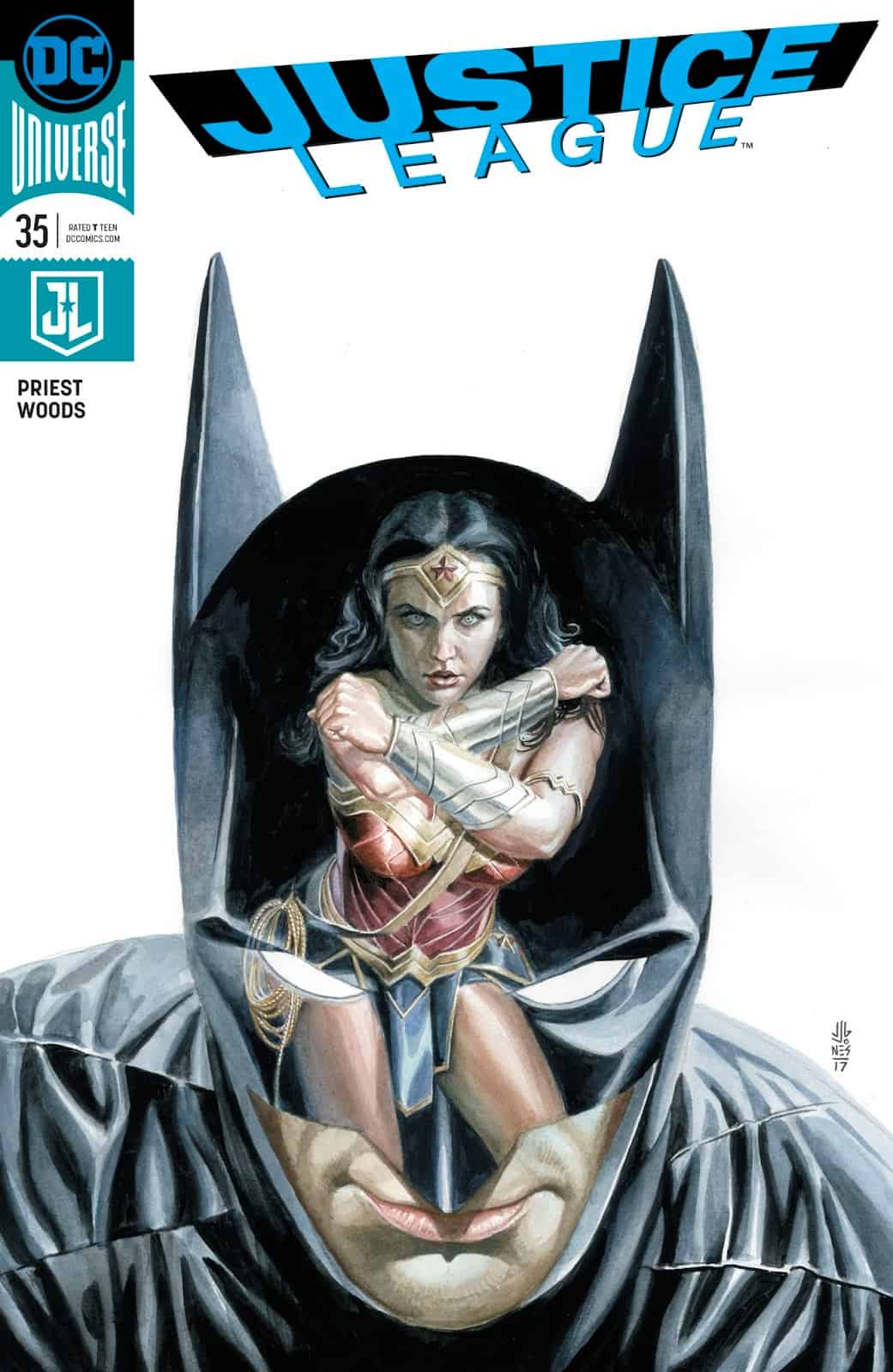 Batman is worn out after three days without sleep.  His attempts to coordinate the Justice League resulted in the League’s interference in the FBI’s attempt to rescue some nuns from terrorists.  The fiasco resulted in one of the terrorists killing a nun with Wonder Woman’s own sword.

Wonder Woman is giving a fun little interview with the detectives.  They’re trying to figure out what insight she can provide into the League’s interference, but turns out she’s there only to get something she left behind:  her sword.  The problem is, the police have that as evidence and aren’t willing to turn it over.  Wonder Woman gives her statement, and leaves, seemingly, without her sword.

On board, the Watchtower, a giant being in a shiny metal suit with a giant spear appears out of thin air.  Jessica Cruz (one of the many Green Lanterns) is on board, singing (in Spanish).  She’s surprised by this man and immediately attacks.  Most of the conversation is in Spanish which, surprisingly, the stranger seems fluent in.  Until finally she responds in English and he switches as well and that’s when they find out he wasn’t attacking.  He’d been trying to get a hold of them for 20 minutes and had no response.  His name is Glenn Gammeron (for those of you long-time Priest followers). 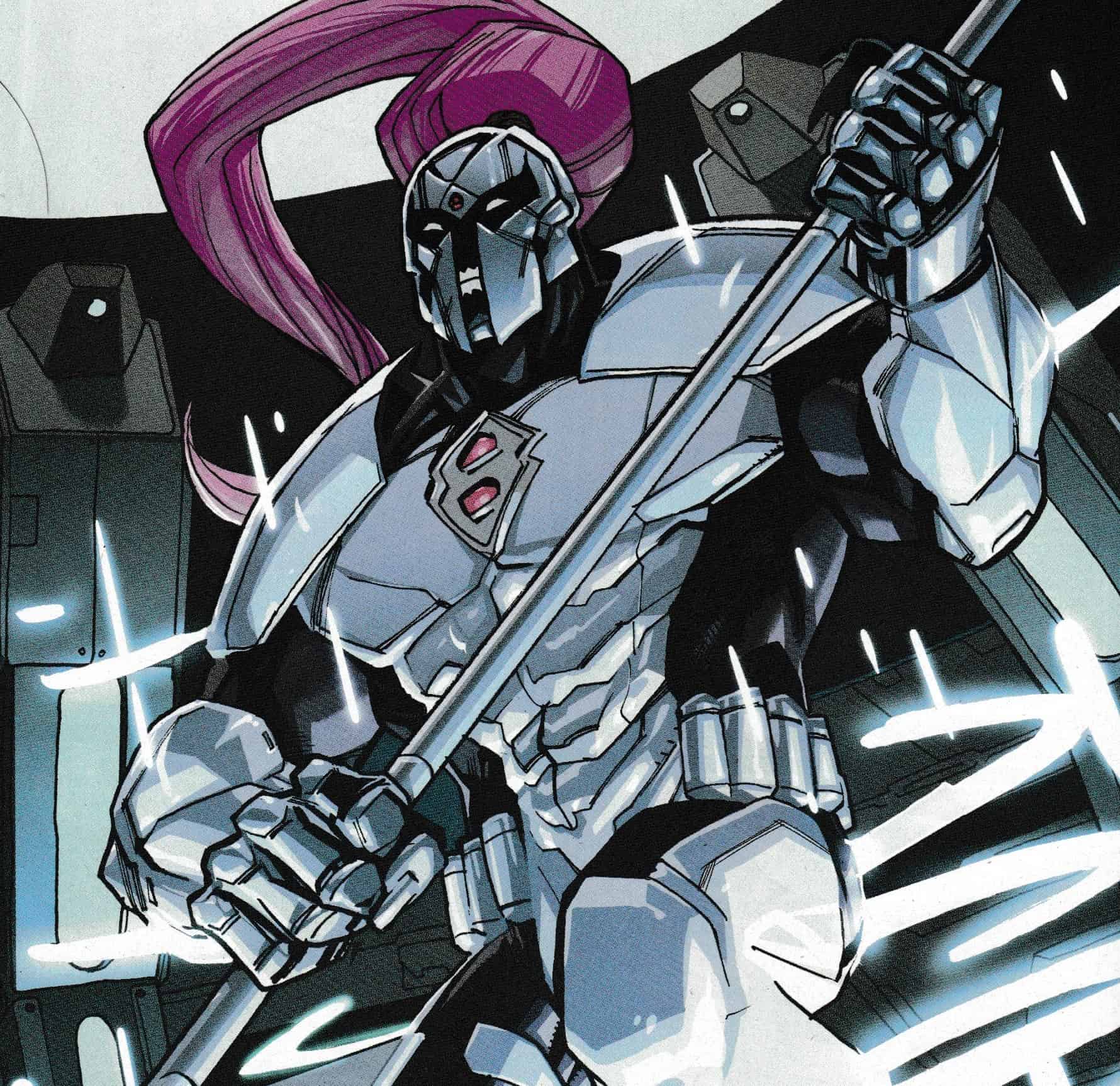 Wonder Woman arrives on the Watchtower, accompanied by one of the detectives, holding her sword in an evidence bag.  The detective turns out to be Bruce Wayne in disguise.  There’s some clear hostility from Wonder Woman as she takes her sword to clean it up and Bruce dons his Batman outfit.  Then, Glenn explains why he’s there.  He was after a bounty but the bounty may have left a bit of an infestation on Earth.  Glenn isn’t sure but needs the League’s help.

So Jessica calls down to Flash (who is in the middle of coaching basketball players in the Police Athletic League) to have him search San Francisco for the bug.  Flash grabs hold of Wally West and the two are off.  Cyborg and Glenn take to the skies, tracking the bugs.  Wally finds the bugs first as they quickly devour a dog, becoming some sort of demon/bug hybrid dog.  Unfortunately, the dog is not the problem.  The giant hybrid monster terrorizing downtown is. 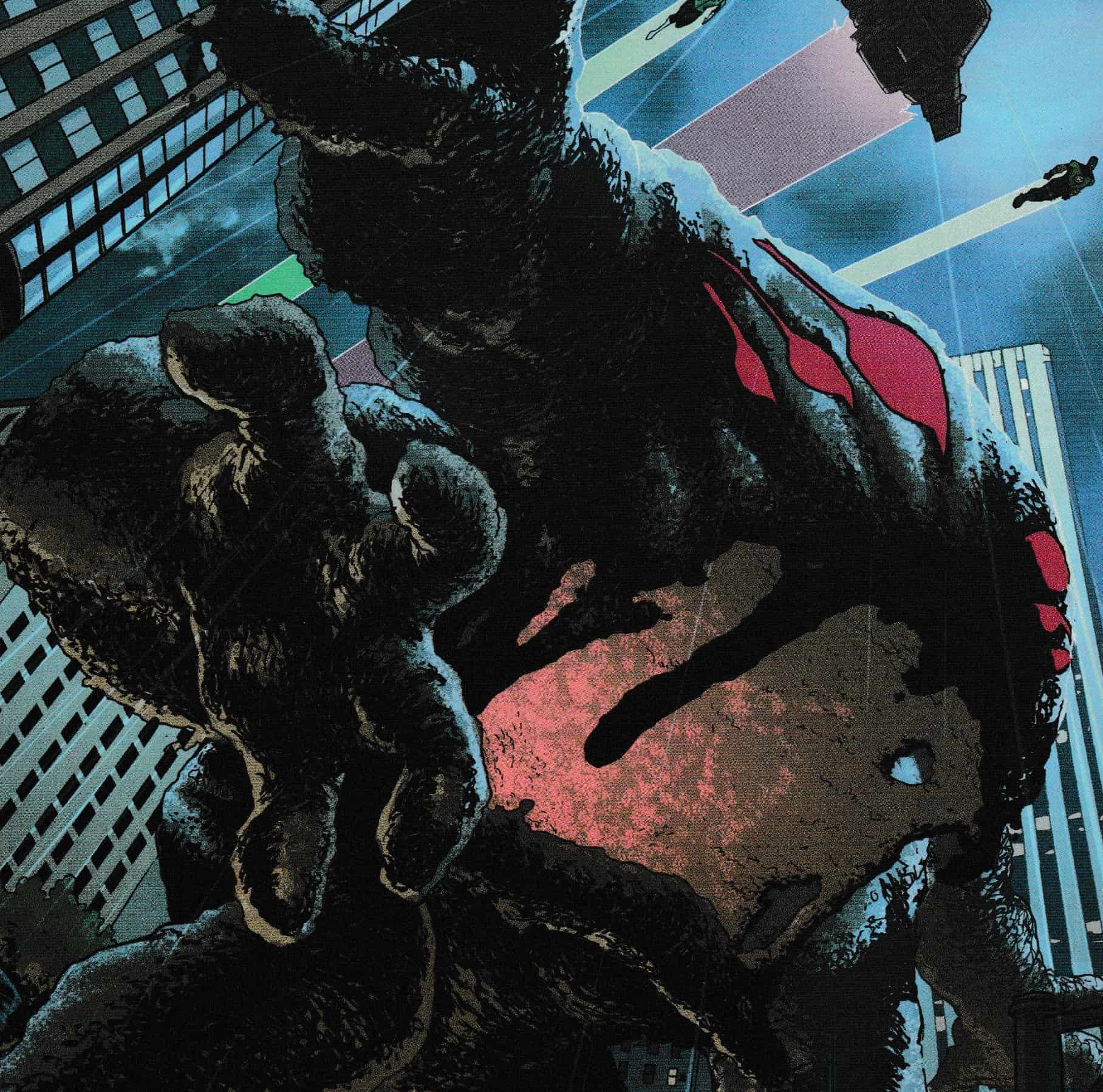 Superman is observing the chaos below and suggests going down there, but Wonder Woman isn’t so sure.  She’s having a moment of doubt as she has used violence too often to solve her problems.  Maybe the team isn’t what she should be part of.  Batman knows this is really about the death of the nun and his failure.  That gets Wonder Woman steamed and she quickly changes the subject and advocates for them helping out their teammates. 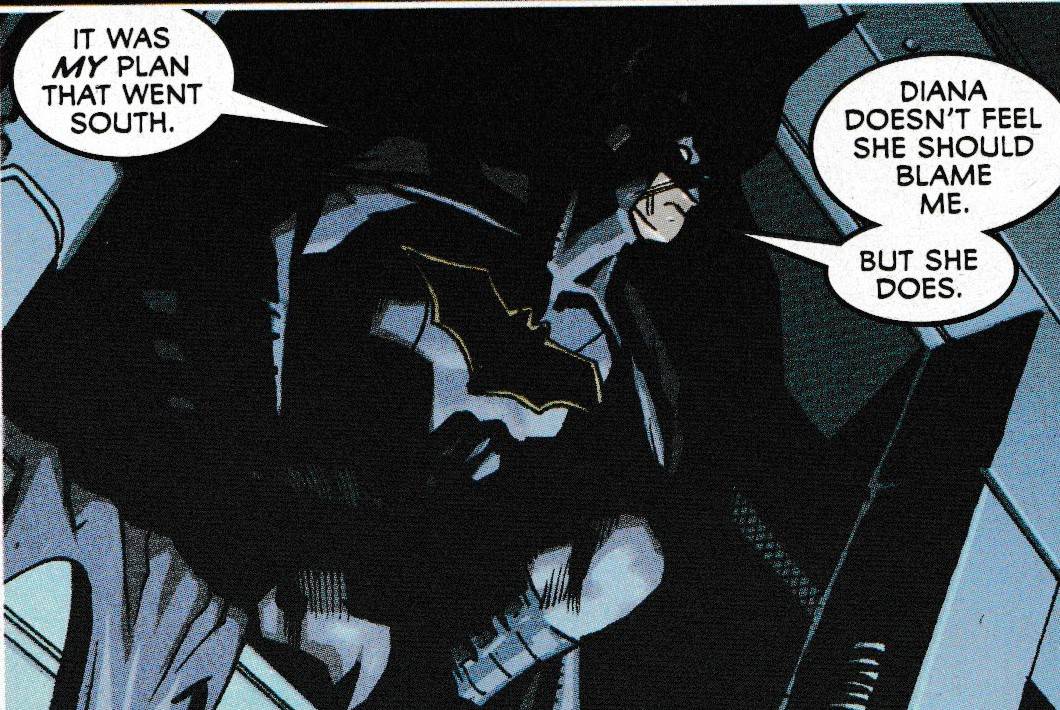 But their teammates don’t need help.  After a pitched battle that mostly involved them trying to figure out what to do with the bugs, the original bug is caught and taken away from earth by Glenn.  But the news footage of their victory is interrupted by news footage of their debacle the day before.  Apparently, there’s video of the terrorist stabbing the nun with Wonder Woman’s sword.

I’ll admit to this issue being slightly better than the last one.  I felt like Priest wasn’t necessarily going after the “Batman made a mistake” angle and was instead looking at this as “the Justice League needs to be accountable”.  After all, how can law enforcement be effective if these super-powered individuals are constantly inserting themselves into the situations?  It’s an attempt at a commentary on these super-powered teams as if they existed in the real world.  Which can be well done and I guess I can commend Priest for looking at this more from a personal point of view than from an iconic point of view.  Granted, Marvel did this years ago with the first Civil War event, but there’s the hope that Priest can give a little more than just having it devolve into heroes fighting heroes.

The problem is that it still makes little sense.  Yes, the terrorist used Wonder Woman’s sword, and so ultimately it will become more of an issue of public perception than what really happened, but it was the police that blew up the room.  Did the terrorists not have any other weapons?  If no, what kind of terrorists are they?  If yes, then the nun was doomed anyways.  Let me say this again:  the police screwed up.  Not the League.  Although maybe they should stick to bigger threats than stuff the police can “handle”.

On top of that, Wonder Woman just left her sword there?  Why?  What purpose?  So that the police could examine it?  She already stated they didn’t need it.  Batman steals it from evidence for her even when the police claim they still need it.  Wonder Woman, herself, didn’t stick around to help the police, so why leave her sword?  You mean to tell me that she “forgot” it?

This is the problem I’m having with Priest’s story so far.  I get what he’s going for…inserting a little more humanity into the League.  Showing them going through personal problems instead of fighting the next Darkseid.  Show how the average person might deal with the League; how the average government would.  But the details just aren’t adding up.  I can understand the detectives with their interview, but I have to wonder if they ever tried to figure out why the FBI used flashbangs without first checking out the room.

That’s not to say the book didn’t have some nice parts.  A lot of the back and forth was enjoyable to read.  Wonder Woman’s interview with the hapless detective was funny, especially her educating him on the term “habit”.  Once again, Priest does give us little details which makes me appreciate his perspective.  Just as in the last issue when we saw Simon Boy praying, we get the majority of a battle with dialogue in Spanish (since Jessica Cruz is Hispanic).  Time was, we’d just get a little asterisk with a note saying “spoken in Spanish” and the actual dialogue would be English.  But this feels like it gives Cruz a little more humanity.

The conversation between Glenn and Cyborg was also interesting and probably way too short.  Cyborg asks Glenn why of all the forms he could choose, he chose a black man and Glenn responded that he chose a figure that was beautiful and he didn’t stop to think about the prejudices most humans have.  And when Glenn asks Cyborg why, as the most advanced being of almost any race, he isn’t leading the team, Cyborg simply replies “I don’t want to be a boss.”  It’s some great insight into Cyborg and I’m hoping we see more going forward. 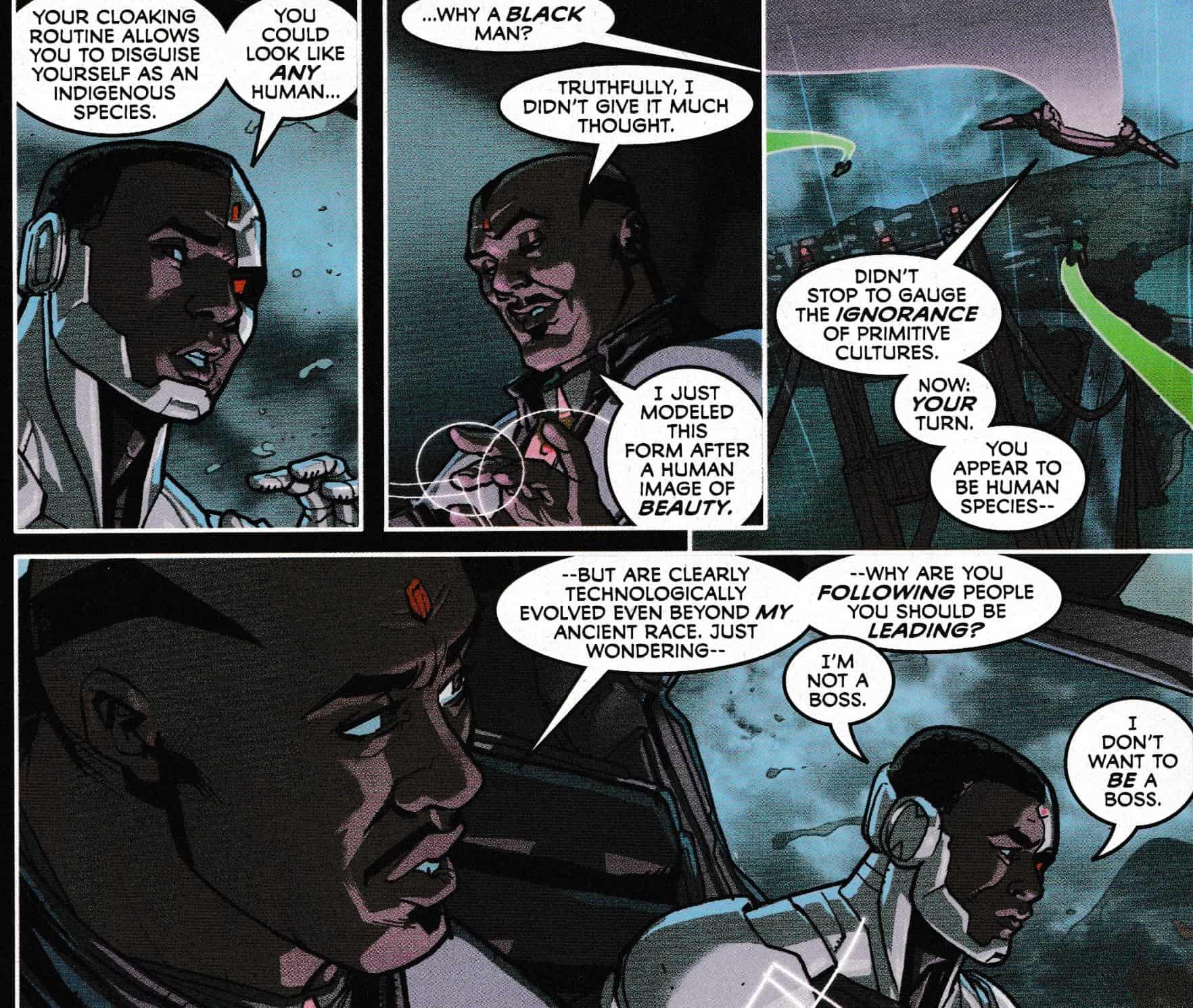 But the problem is that most of the story is about fighting this swarm creature…  and feels really pointless.  Doesn’t serve to advance the overall story much (although does serve to get Kid Flash more involved in the League).  In fact, it works against the story because the public sees the League deal with Swarm with no casualties and they love it.

Final Thoughts:  While I understand and can appreciate Priest’s desire to give us a story more grounded in reality and more personal than we’ve seen for a while, this one isn’t working so far.  The overall theme of the arc is still not working as a believable story.  Still, some of the character development is nice and so it’s worth a read.