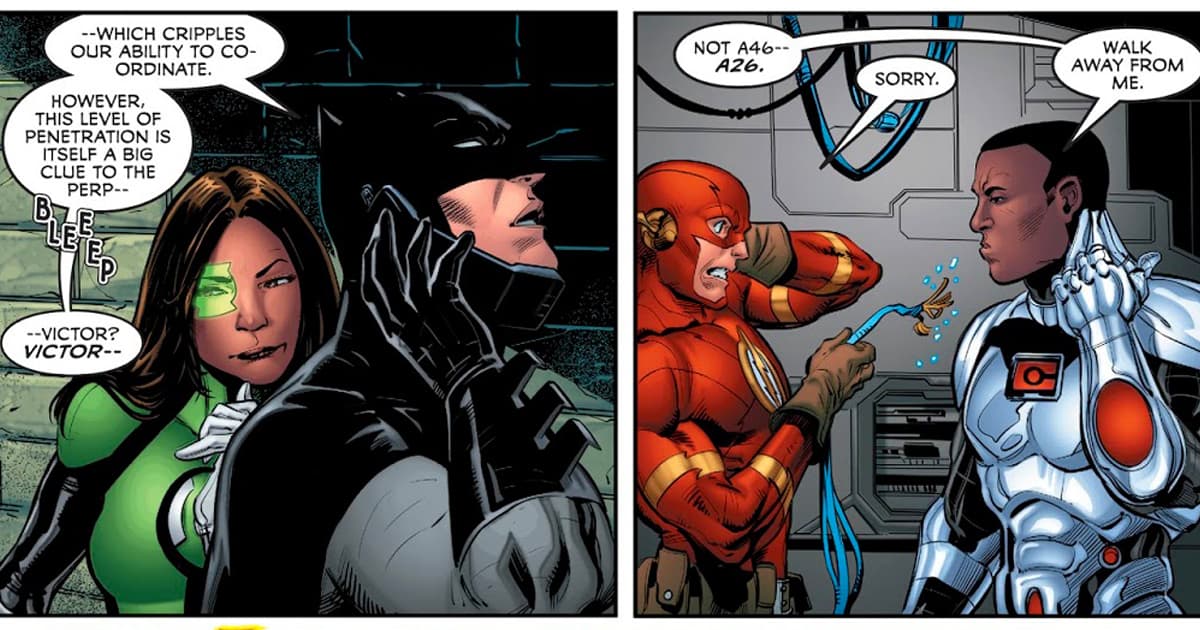 THE PEOPLE VS JUSTICE LEAGUE, PART 4:  With Simon missing, the League must track him down and save him from a deranged fan.  But how can they do that and improve their image in the eyes of the people when this fan seems to know every move they make? 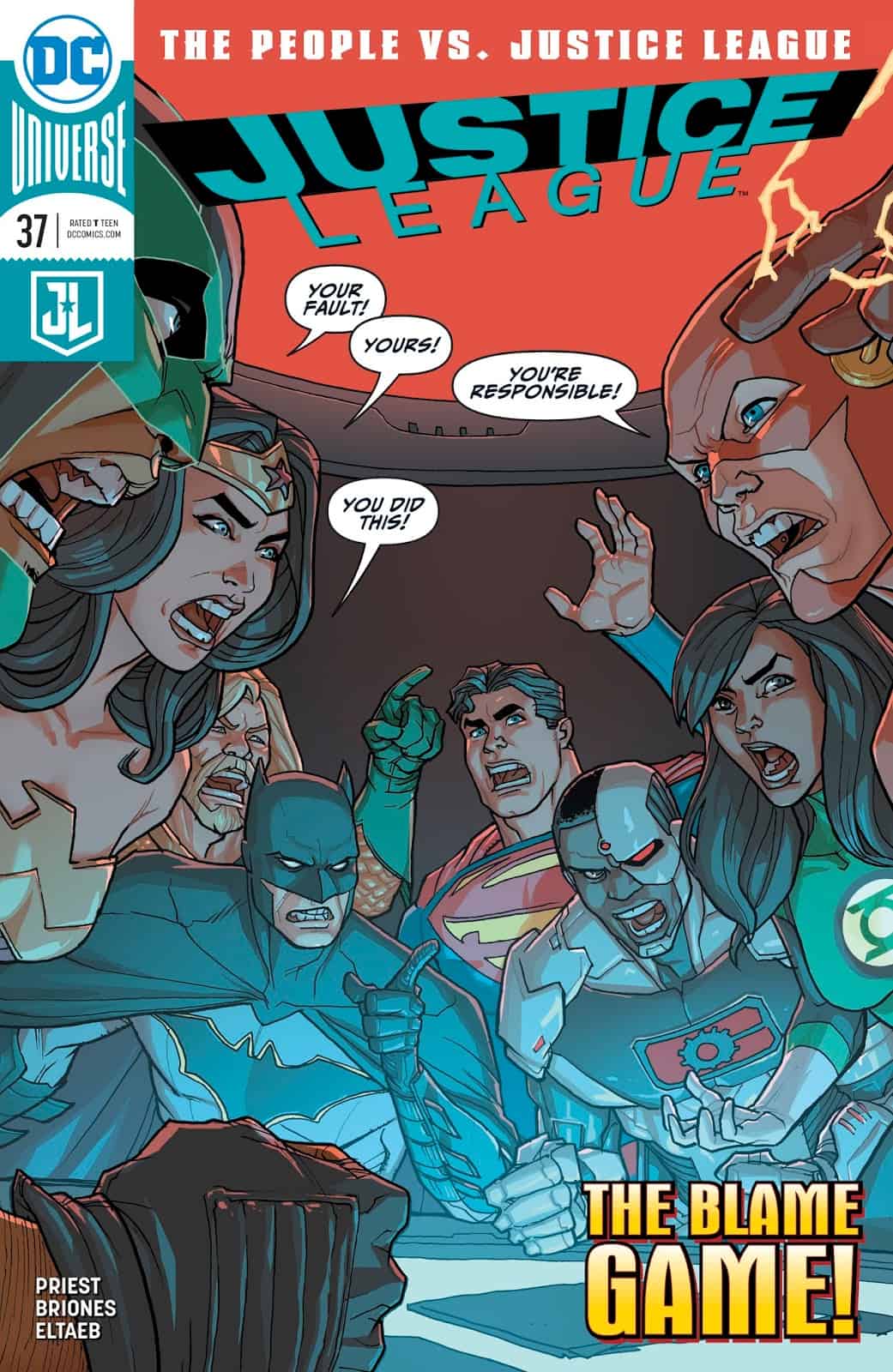 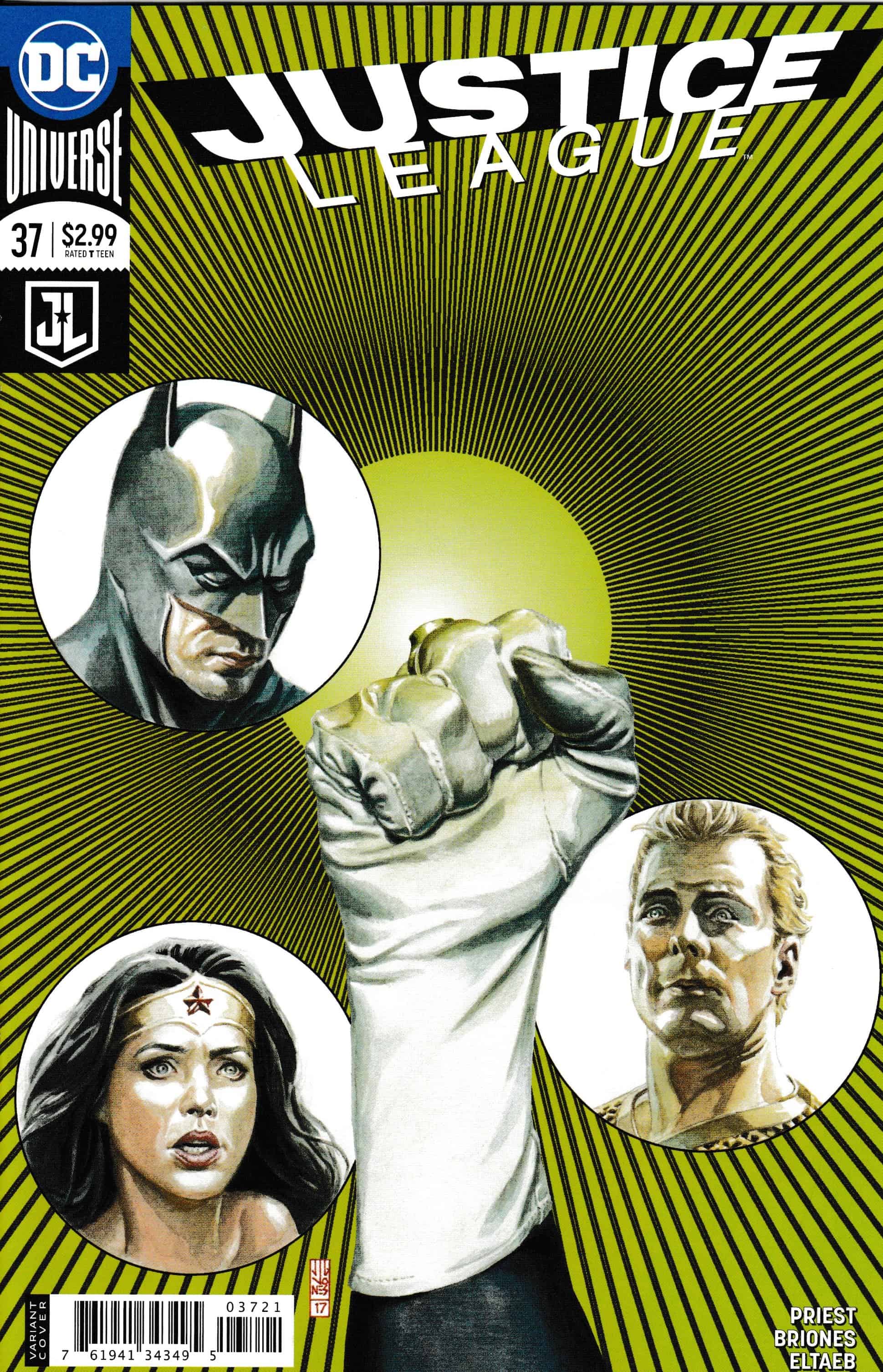 The Justice League is facing scrutiny from the US Government over their seeming immunity from oversight and interference in police procedures.  However, things get worse when the congresswoman is killed by a Batman copycat and the League interferes with U.S. spying on China.  When the League manages to track down the copycat, Batman goes alone, but it’s Simon Baz, disguised as Bruce Wayne, who gets captured.

Years ago, as the League battled some giant monster, a kid looked on in amazement, while wearing a Green Lantern ring (not a real one, of course).  However, during the battle, a building collapses on him.  He’s crippled, but pushing through he manages to walk again, to swim, to become stronger.  He joins the military, all in the hope of protecting the innocent and the ideals of America.

But now, he’s holding Simon Baz captive, a neural inhibitor attached to the back of his neck completely disrupting his concentration so that he cannot summon his ring, which is kept in a special cube that is constantly draining its power.  This super fan of the League is especially a fan of Hal Jordan, but not so much a fan of all the other Green Lanterns running around. 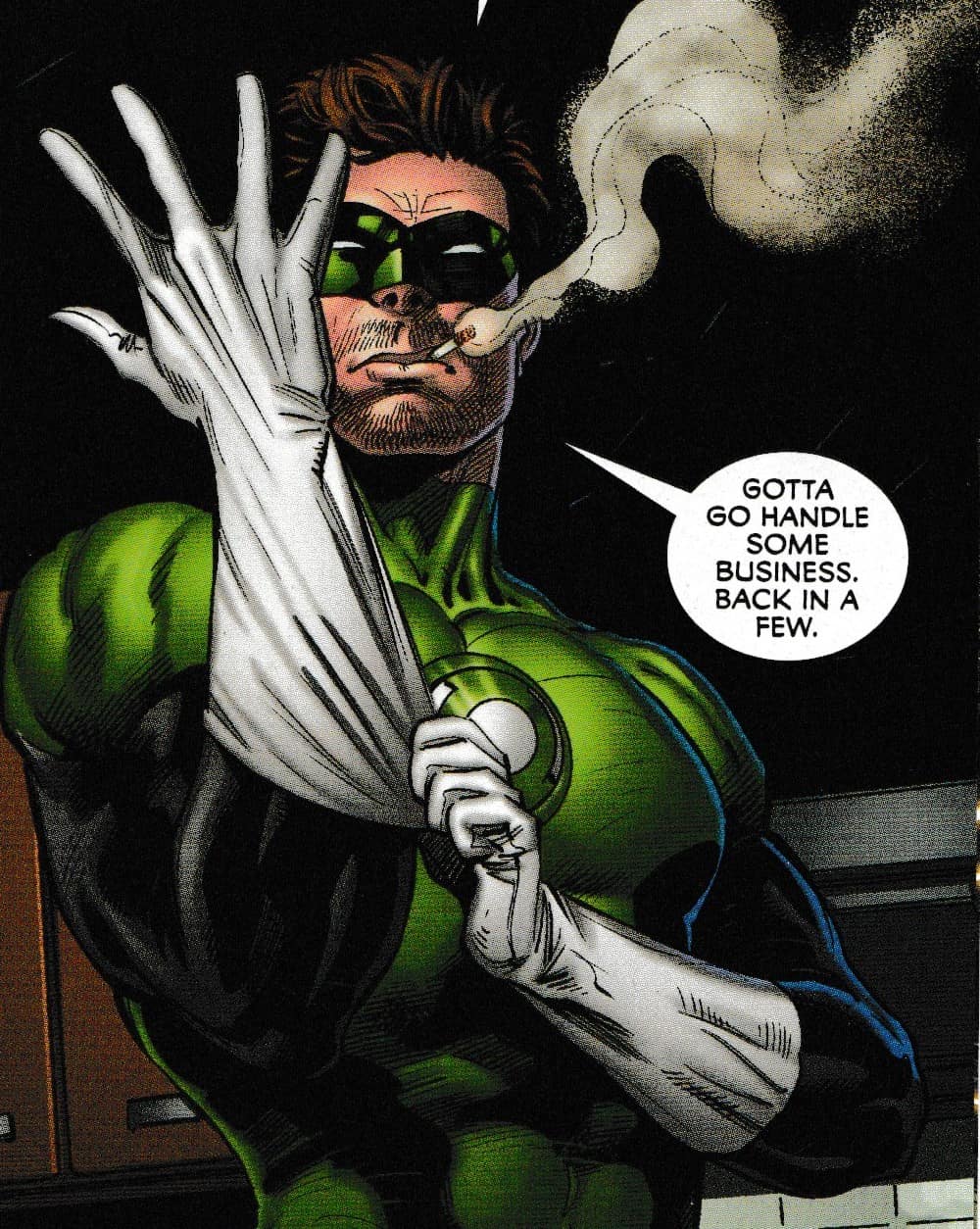 Speaking of other Lanterns, Jessica Cruz and Batman are investigating Baz’s last location.  Her ring, for some reason, can’t seem to track him.  Elsewhere, on TV, an interviewer (Roland Knox) and a defense attorney are having a heated debate about the potential violations of civil liberty by the Justice League.

Back at the bar in East St. Louis, Jessica shows up, seeking Simon’s last location.  In the storage room in the back, Jessica finds a note that just says “Hello Jessica” and then the bar explodes.  She’s unharmed and takes her evidence back to Batman who realizes this isn’t a copycat.  He’s some sort of collector.

Meanwhile, the copycat is getting ready to leave his apartment, but this time dressed as the Hal Jordan Green Lantern.

Cyborg, while still thinking about what Glenn said to him a couple issues ago about being able to lead the team, disconnects from the com channel and sends down a separate phone to Batman to talk to him.  Once Batman sent the design of the trap in the bar, Cyborg was able to find out that the collector (that’s what we’re calling the copycat now) had somehow infiltrated the Watchtower and had been listening and observing everything they were doing.  As Flash speeds through the control center, trying to undo the collector’s damage.

Back in the apartment in East St. Louis, Simon struggles forward, trying to work past the inhibitor.  Finally, he breaks a wooden leg off a chair and smashes it into his hand.  The pain is enough to distract from the inhibitor and he is able to reach behind and tear the inhibitor from the back of his neck.  With the inhibitor one, Simon grabs the cube and smashes it.  He tries to place the ring on his finger but it won’t fit…because his ring is already on his finger.  It was all an illusion.  Simon immediately takes to the sky, communicating to Jessica that the guy isn’t a copycat, he’s a super fan.  And that means trouble to anybody who doesn’t like the Justice League.

Remember that television interview from before?  Roland Knox, who seems to be anti-League?  Well, “Hal Jordan” has come for him.  The Fan accuses him of putting lives in danger by trying to discredit the League.  He fires a single laser beam, but suddenly the defense attorney jumps up and blocks the blast with her wrist bangle…a very familiar one at that.  Then Roland Knox removes his disguise and it’s Aquaman.  And in a flash of light, Batman, Simon, and Jessica all teleport in, with Simon delivering a fantastic uppercut to the fan.  But he’s not just any fan, Batman has discovered who he is:  Joshua Christian, one of the technicians who assembled the Watchtower (which explains how he was able to infiltrate it and how he has access to such technology).

But with Joshua down, another problem arises…what to do with him?  If he testifies, the League would be finished.  They can’t just lock him up permanently without any trial as that would be cruel.  They can’t just kill him, that would go against the League’s morals.  And they realize the trap they’re in when dealing with someone who is a citizen, who isn’t just a super-powered menace, but a deranged human.  And as the League beams out against their will (and to their surprise), the Fan laughs. 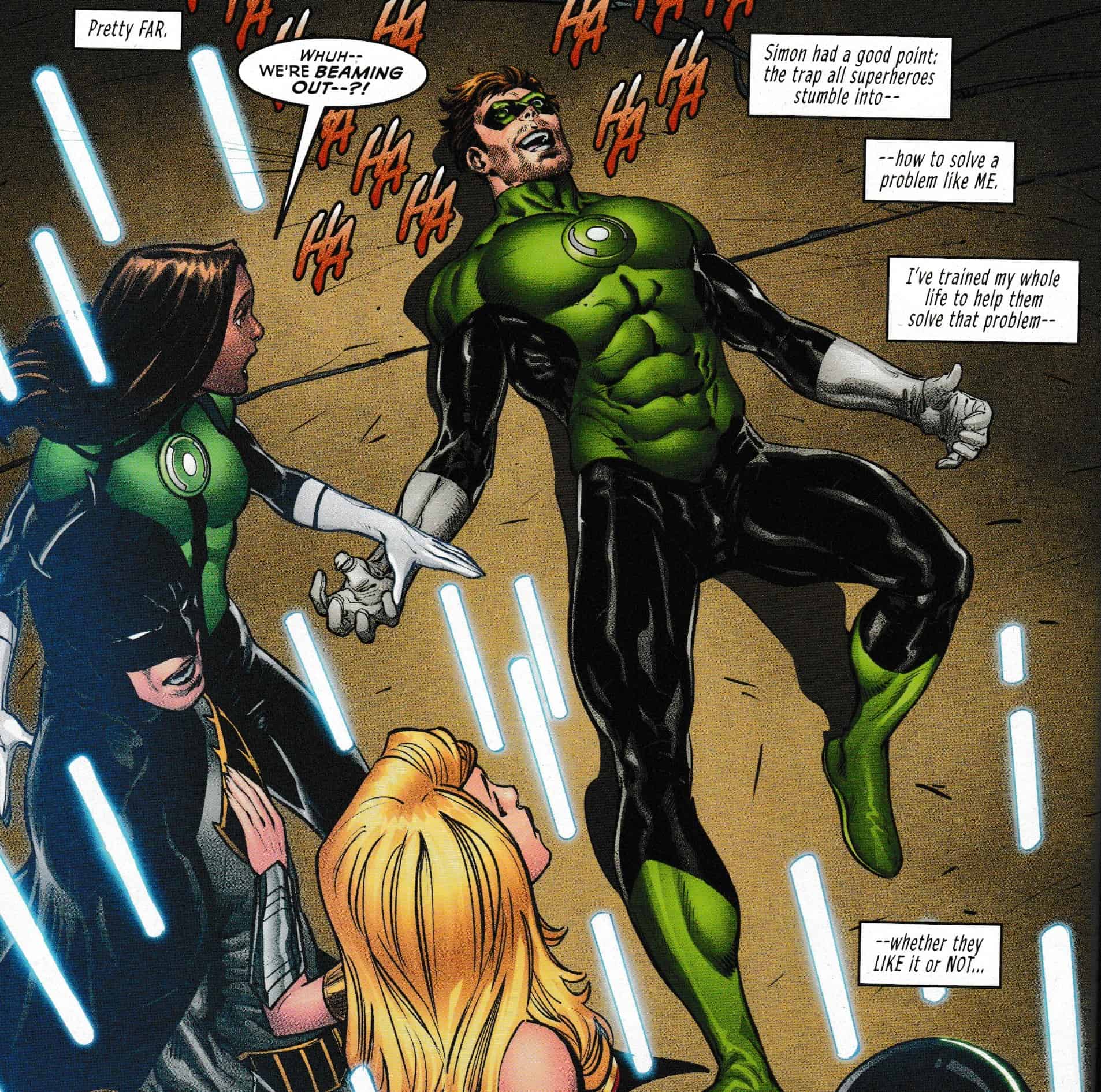 Can you ever take fandom too far?

The answer, according to Priest, is clearly “yes”.  And he’s right.  Throughout history (especially in the 20th and 21st centuries) we see fans of celebrities carrying it too far, taking to an obsessive level, killing in the name of the celebrities (history lesson:  John Hinkley Jr attempted to assassinate Ronald Reagan in the name of Jodie Foster) and sometimes killing those same celebrities (the president of Selena’s fan club killed her).

So what happens when you get celebrities like the Justice League?  Well, when you have super-powered celebrities, you run the risk of getting a super powered fan.  And when that happens, any detractors better watch out.

I like what Priest is going for here.  We opened with more of the Congressional hearing where poor Superman, who has never been a diplomat or politician, is grilled about the League’s practices.  And then to find out that the events of the last few issues are due to a super fan? It may not be a perfect issue, but I definitely am enjoying this run more than I did at the start.

I still noticed, though a few problems that seem to plague Priest, namely, sometimes just assuming that we must accept the story without thinking too hard about how it got there.  The fact that Jessica couldn’t track Simon makes no sense if Simon’s ring was on him the whole time.  She would have tracked him through his ring and that was fine if the ring was in some sort of stasis cube, but since it wasn’t, why couldn’t she track him?  Also, Jessica called the bad guy a “fan” when, at the time, they thought he was simply a copycat.  This seemed to be jumping the gun here.  And the opening scene with the fan doing situps outside his window just reeked of 90’s stereotypes…  completely ripped bad boy, smoking while he did ridiculously dangerous exercises.  I about rolled my eyes at this.  But I don’t necessarily hold this against Priest and crew.  Maybe this is what they were going for. 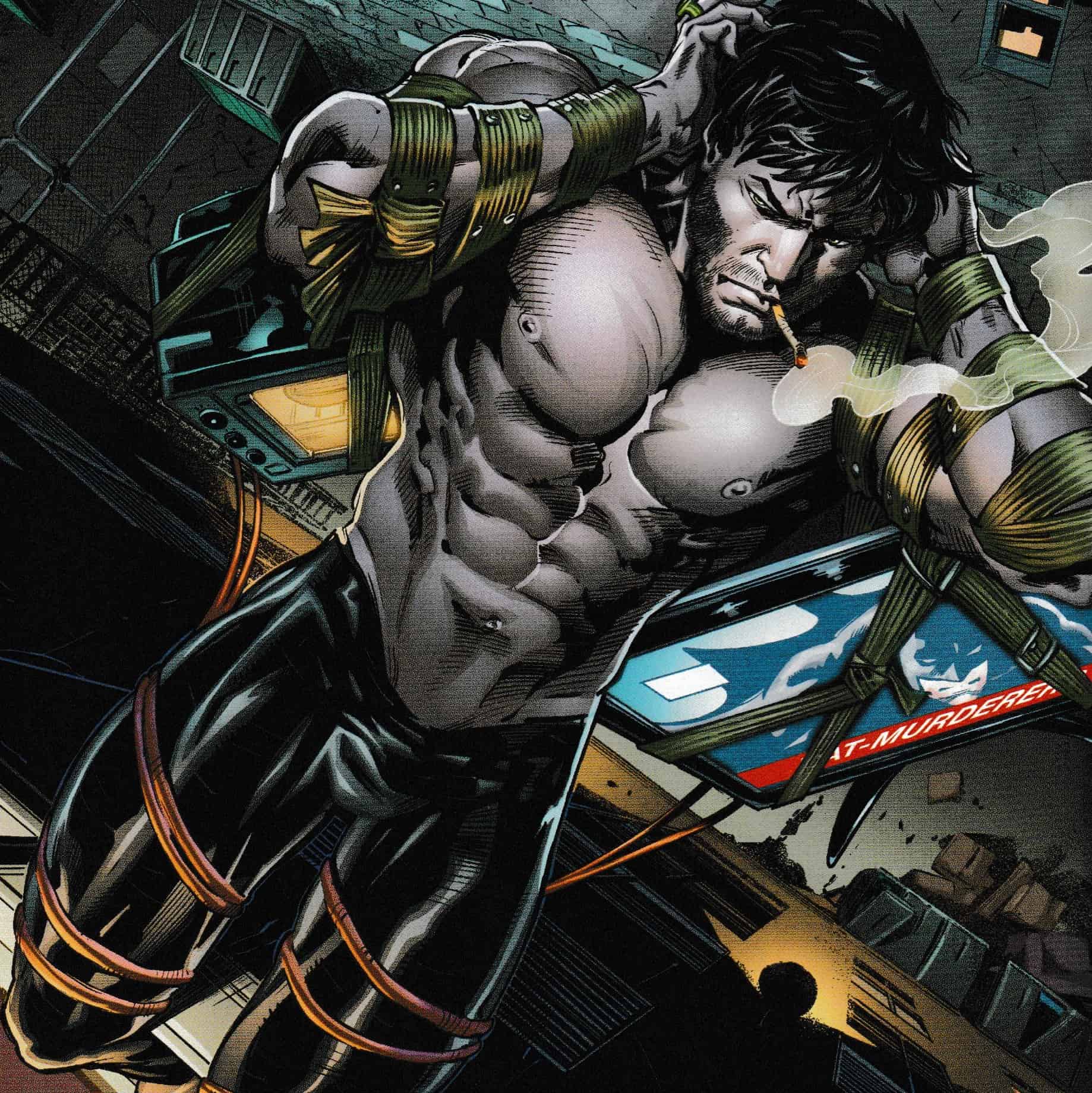 Speaking of the art, it was definitely better than we’d seen.  Briones’ pencils and inks were a sight for sore eyes after Woods’ last few issues.

Outside the main story, we get some great little comedic moments (such as when Flash unplugs the wrong wire) but we also can see Cyborg seriously contemplating his place within the League.  I can’t say he’s been my favorite character, but I’m loving the attention Priest is giving him. 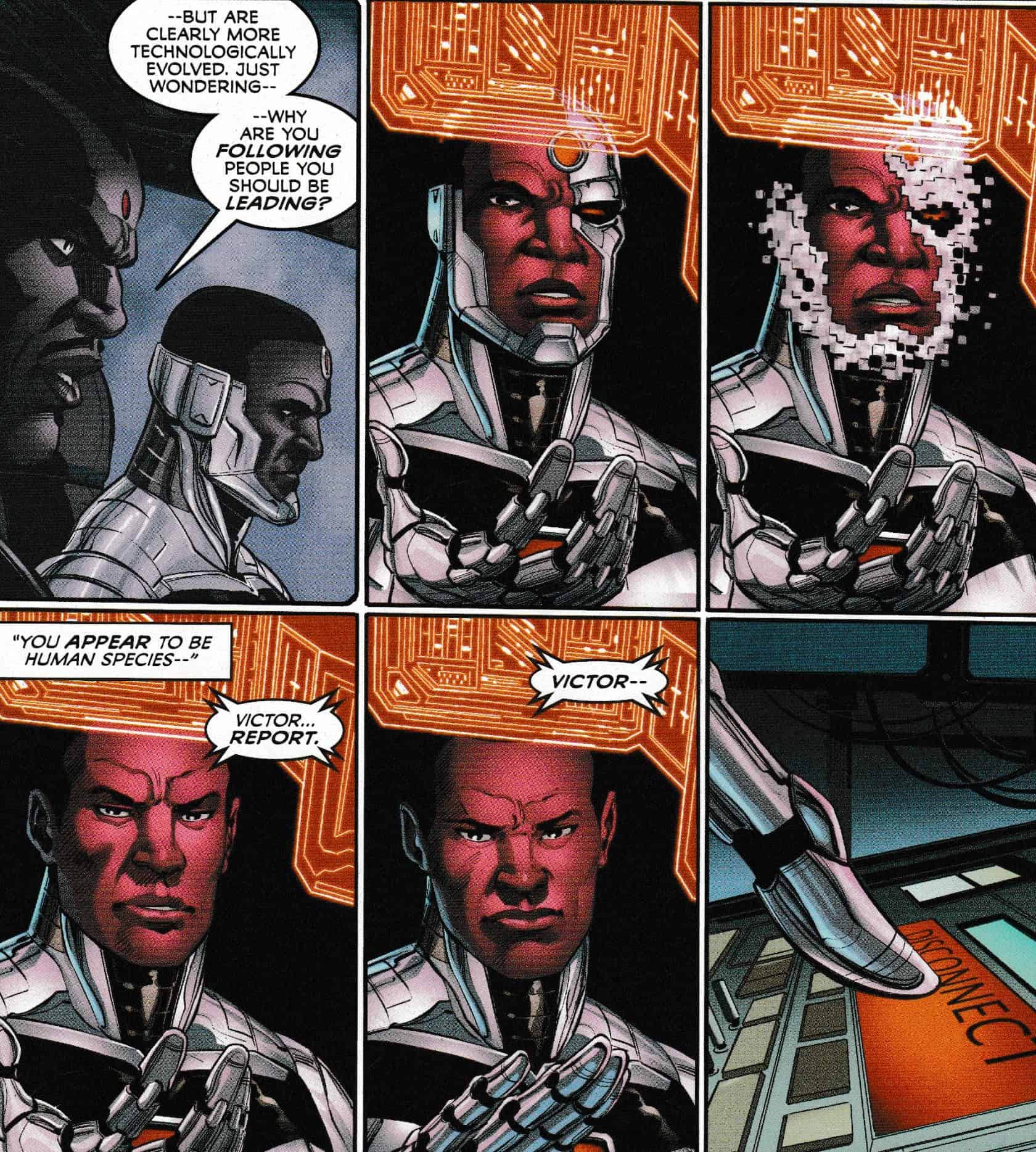 Overall, it was a good issue.  Maybe won’t be terribly memorable in the long run, but definitely a nice commentary on how the real world would perceive these heroes and what threats the heroes themselves might create.

Final Thoughts:  Priests run has taken shape and I’m liking what I’m seeing.  Still room for improvement, but the commentary on celebrities is great to read and for the first time in a long time, I’m looking forward to the next Justice League issue!