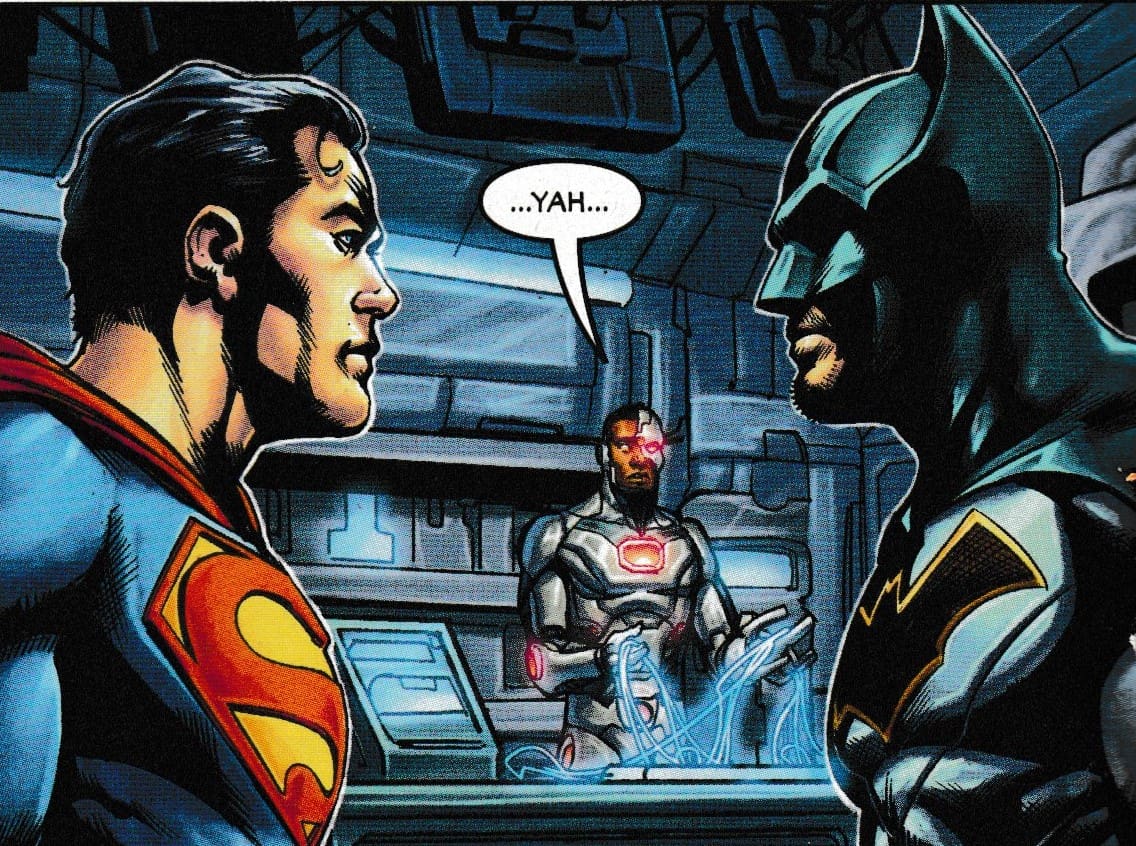 THE PEOPLE VS THE JUSTICE LEAGE, PART 5:  With the League scattered across the globe, they must deal with a tired Batman as well as a crisis aboard the Watchtower. 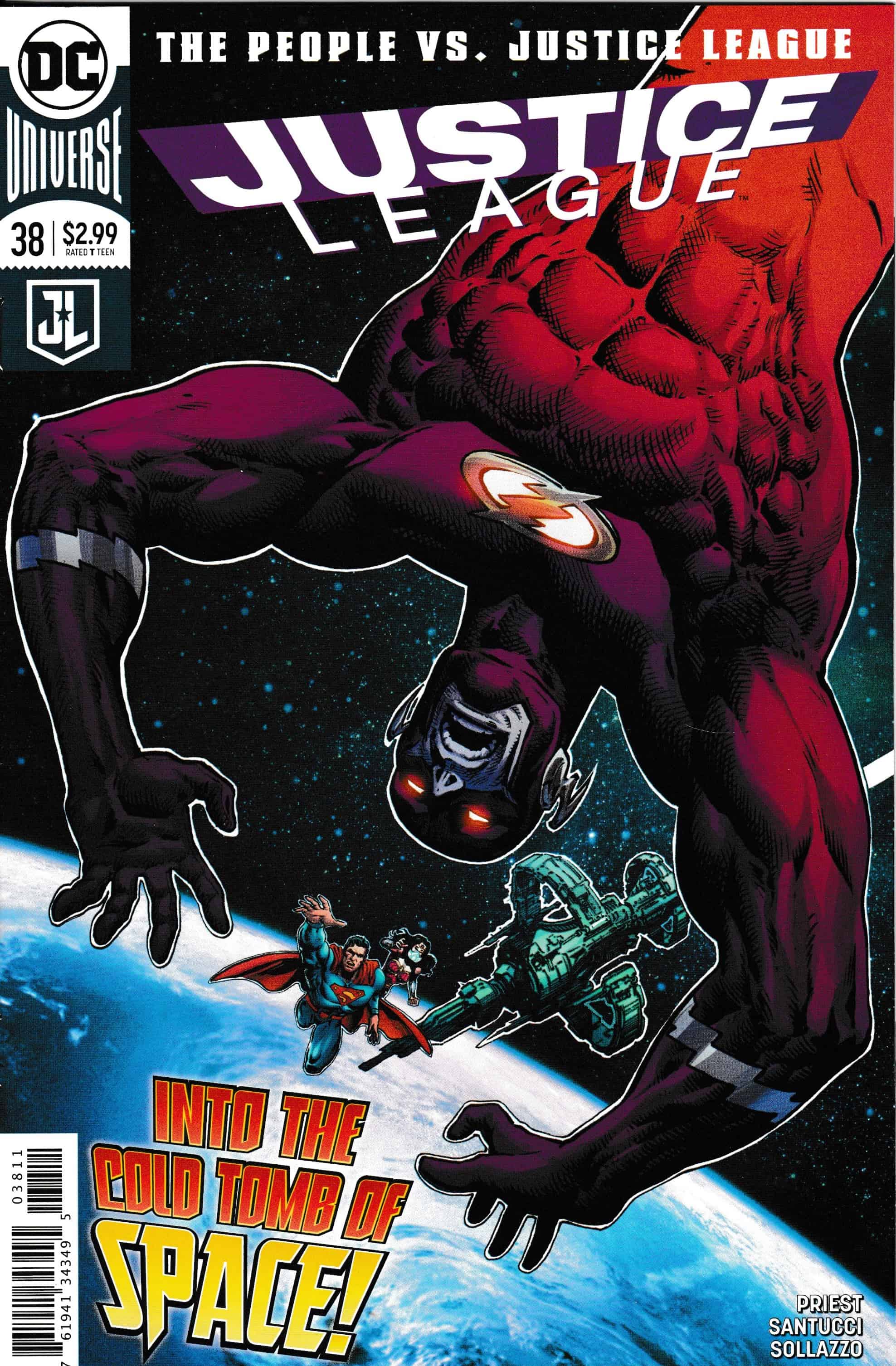 Thanks to a screw up that left a hostage dead, the League is dealing with an inquiry by the United States government, who seems to think there should be more oversight.

The League is facing a deranged fan, one who helped to build their Watchtower.  This fan managed to take control of the tower’s teleportation system and just when the League was ready to capture him, teleported them across the planet.  Only Flash and Cyborg were spared as they were on board the Watchtower, trying to figure out how to undo the Fan’s infiltration.

And through all this, Cyborg is facing an internal crisis, trying to figure out his place in the League while Batman is dealing with his leadership being questioned.

In Africa, Cyborg arrives to pick up Wonder Woman.  He shows up looking like a normal human, but it’s just computer trickery, an imaged overlapping his real body.  Wonder Woman seems happy, for the first time in weeks.  Cyborg, on the other hand, is depressed, berating himself for letting the Fan get the drop on them.  In the mountains of Nepal, Jessica Cruz finds Batman in the snow, just standing there.  She grabs him and they fly off. 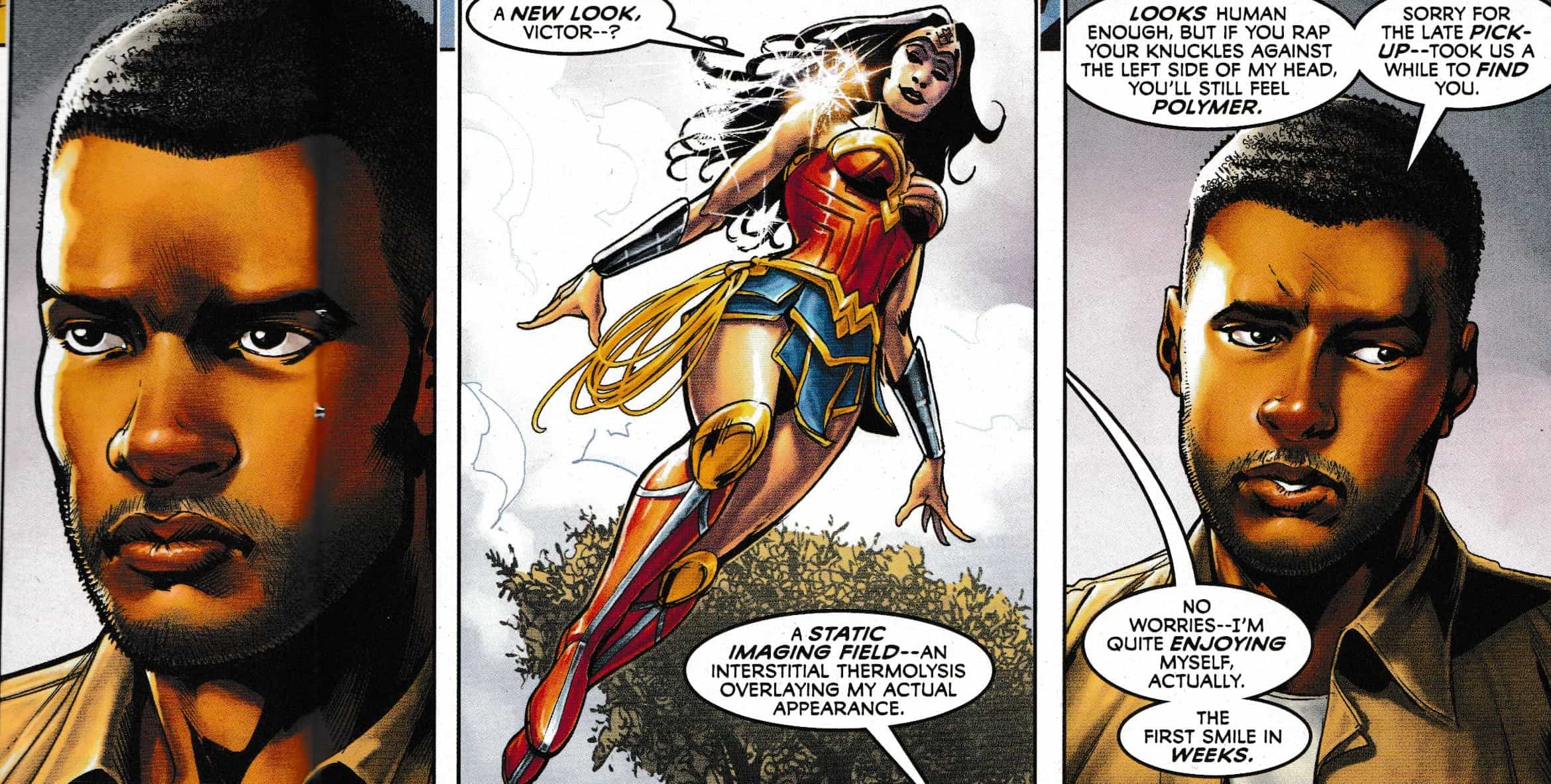 At the Daily Planet, the League surprises Superman with an impromptu meeting…without Batman.  The problem is Batman, combining his numerous operatives in Gotham City as well as his second Justice League and the fact that he never sleeps.  The task is up to Superman to talk to him since Supes is Batman’s closest friend.  But ultimately, the choice is made:  Batman must go.

On board the Watchtower, Flash is by himself when he hears a loud noise that originated outside.  He notices a Lexcorp maintenance crew shuttle that has crashed into one of the docking arms.  Flash puts on a spacesuit and heads outside to help.  Meanwhile, a second shuttle arrives, this one carrying several members of the League.  Simon Baz is still going on and on about Superman asking him to lunch.  Of course, Simon is in shock, amazed that one of the “important” Leaguers would care about him.

Even as the League discusses Simon’s fixation, the Flash is having some difficulty getting one of the Lexcorp workers inside.  Everything that can go wrong, is.  Back in the Watchtower, Batman and Jessica show up.  And then Superman…and the two come face to face.  Outside, Flash continues his efforts as his life support runs out.  Back inside, we miss the entire conversation between Superman and Batman as Batman agrees to take a leave of absence.

Flash finally makes one last push and this time it’s noticed by the League who pull him and the worker inside.  As Batman gathers some things to leave, he’s confronted in the locker room by Jessica….who kisses him.  Then, before Batman leaves, he goes to the League to announce his replacement (as is his right by the League’s bylaws):  Cyborg. 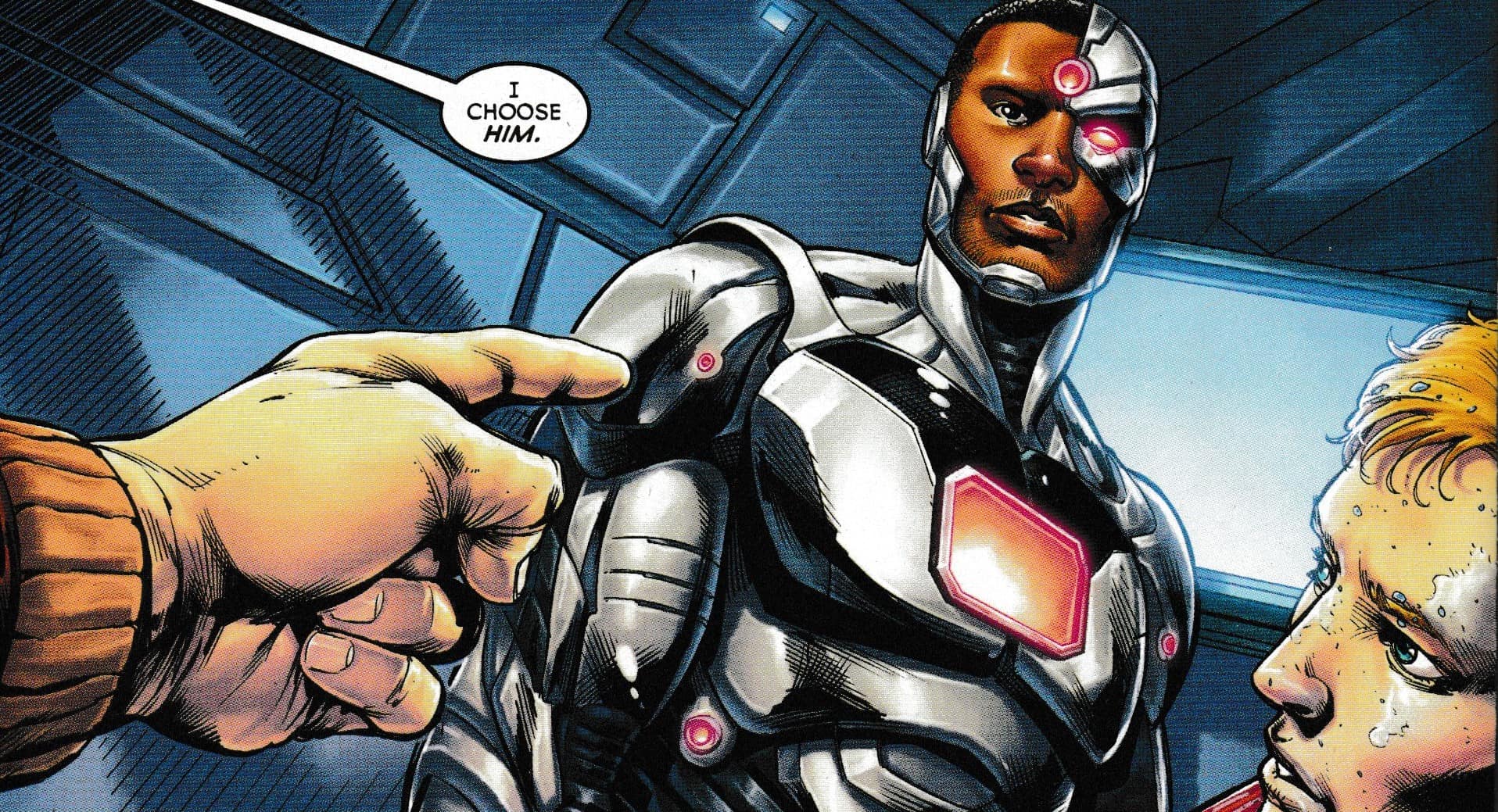 Just when I thought I was enjoying Priest’s story (last issue was actually pretty enjoyable), we take two steps backward, revisiting almost every problem I had with the first two issues of Priest’s run, and then some.

First of all, let’s get the good out of the way…  The art was decent.  Not great, but didn’t detract from the story (as if that’s hard to do).  And I really enjoyed Flash’s spotlight here, his inner monologue.  Granted, it’s a lot of reading, the kind of narration that you don’t get in too many comics these days, but it really spoke to Barry Allen being a scientist, something that is often glossed over.  I could really imagine all of these thoughts running through his head, analyzing every little problem and every little move he was going to make.  And since he’s the Flash, it’s entirely feasible that he would go through all this at incredible speeds.

Plus, we get the leadership of the League turned over to Cyborg.  I’m really enjoying this part of Priest’s run.  Cyborg’s not necessarily my favorite character, but it speaks to some growth.

But the biggest problem is that Priest now built up this Fan as the big villain and then we practically forget about him and how to deal with him in this issue.  Sure, there’s a little bit of the fanboy theme that we see here (with Simon referring to the main members of the League as Superman, Batman, Wonder Woman, and Flash, almost acting as a metanarrative of the League’s casual fan who might not know who the rest are), but ultimately, it’s like taking a massive detour that I still maintain didn’t need to be taken.

And that brings me back to the problem I’ve had with Priest’s writing.  He expects us to just accept that these are legitimate problems.  He doesn’t give us any reason why, no explanation, just like in his first issue.  We’re told that the League’s problem with Batman is that he’s running a second Justice League, is coordinating numerous operatives in Gotham City, and isn’t sleeping much…but that’s what Batman has always done.  Priest hasn’t provided any explanation for what’s changed.  And yet for some reason, this time is different?

And then…there’s the kiss…  We’re meant to believe that Jessica and Batman have had this burgeoning relationship…  but none of the previous issues even hinted at flirtation, let alone some sort of sexual tension.  To make matters worse, Batman is engaged to Catwoman.  Seriously!  I get that Priest has his own story to tell, but when you’re writing inside of a larger universe, you have to take the rest of the universe into account.  For Priest to throw this in there is a serious F-U to Batman fans. 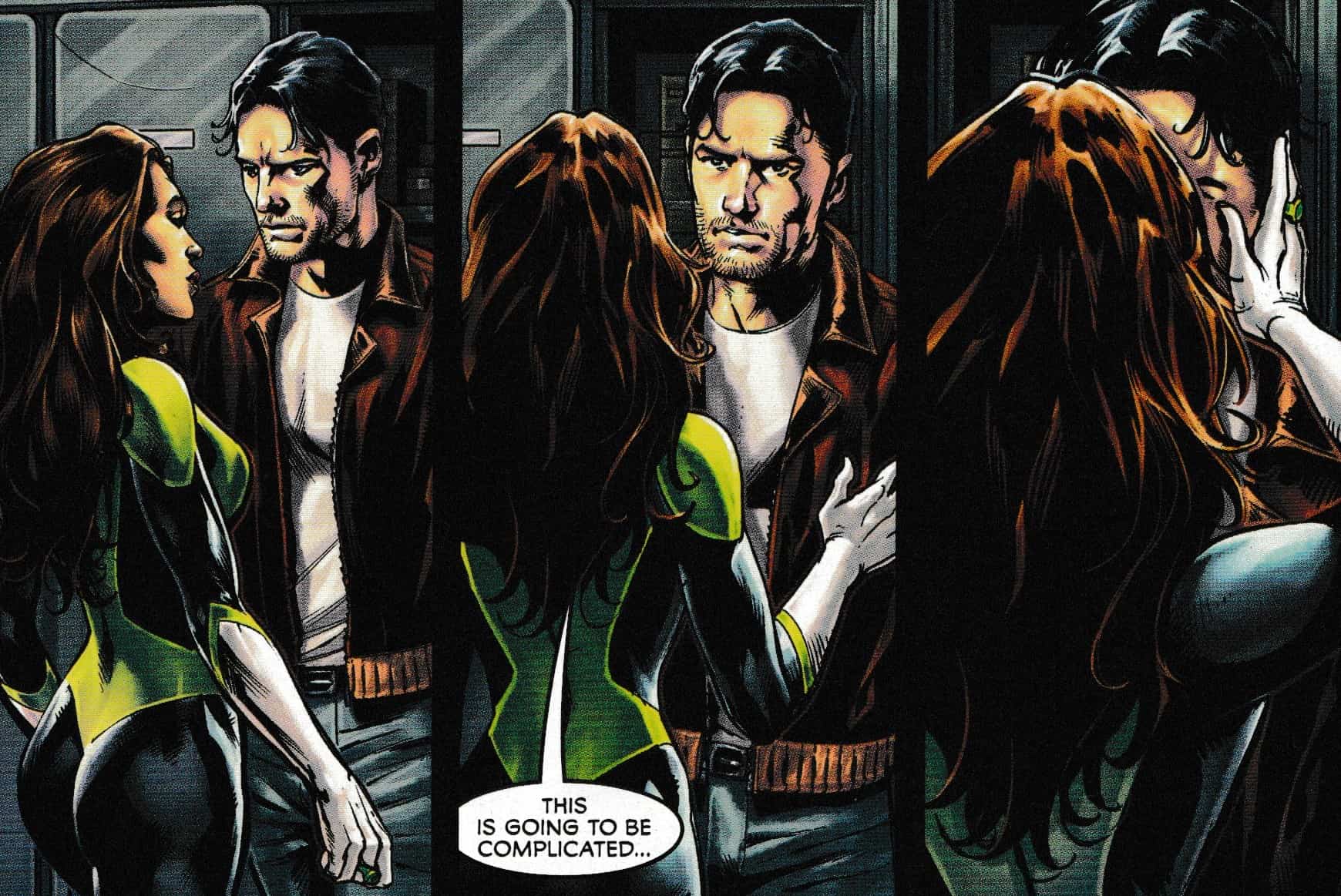 At least…we got some great Flash parts…

Final Thoughts:  Just as Priest seemed to be moving forward, we take a giant hit as Priest takes us back to the same problems I have with the first issue of this run.  The art is good, we get some nice development from Cyborg, and some great monologuing from the Flash, but ultimately, this issue feels like every bit of improvement over the past few issues was just thrown out the window.