JUSTICE LOST:  The League is facing continued criticism from Congress.  But when a disaster looms and the League can’t save everybody, will the public backlash be too much for them and their newly appointed leader?

What You Need to Know:
The League has come under pressure by the U.S. Government to be more accountable.  The public has turned against them and a deranged Fan is trying to help by providing the League with a truly impossible foe.  Meanwhile, Batman has been forced from the League leadership and appointed Cyborg as the new League chairman, a role that he didn’t want at first, but maybe it’s about time.  The Fan also threw a monkey wrench into their workings by teleporting the League across the world.  So far, only one is unaccounted for…

What You’ll Find Out:
What’s the worst place to put a man accustomed to living in water?

A few days ago, that’s where the Fan dropped Aquaman, who is stumbling through, barely able to stay on his feet.  Some bandits show up in dune buggies.  Aquaman deals with them the best he can, but eventually one gets the drop on him.  Before the bandit can shoot, however, he is impaled by a trident.  The Fan is there, having slaughtered the bandits.  He pleads his case to Aquaman, explaining how he is trying to help the League.  He’s trying to teach them a lesson, that the League created this problem, the League created the Fan.  Just then Simon Baz shows up as the Fan teleports away.  For Simon, Aquaman seems to be babbling, due to being out in the heat too long.  Simon is still obsessed with Superman’s suggestion to have lunch (like 3 issues ago?) and so not really paying attention.  But Aquaman knows they need to get back to the Watchtower to deal with the Fan.

Now, Cyborg is facing down Congress, but it’s amusing as they attempt to verify his identity and to figure out if he even should be there.  After all, wasn’t Batman the chairman of the League?  And the committee seemed to be expecting Superman.  More and more confusion (I guess what else can you expect where Congress is involved).  Cyborg is joined by Regina Cole, the League’s lawyer.  Cyborg then goes through a hearing as Congress questions him over the murder of the Congresswoman, the lack of oversight of the Justice League, and other trust issues the people had with the League.

Meanwhile, Batman may not be leading the traditional League, but he is leading the Justice League of America (the Ray, Frost, Black Canary, Vixen, Lobo, and the Atom) as they oversee a derailed train car that was carrying hazardous chemicals.  To make matters worse, it’s snowing, which is going to create a dangerous mixture of the chemicals that have spilled.  With thousands of people at risk no matter what they do, Batman has one option left…to call the League that fired him. 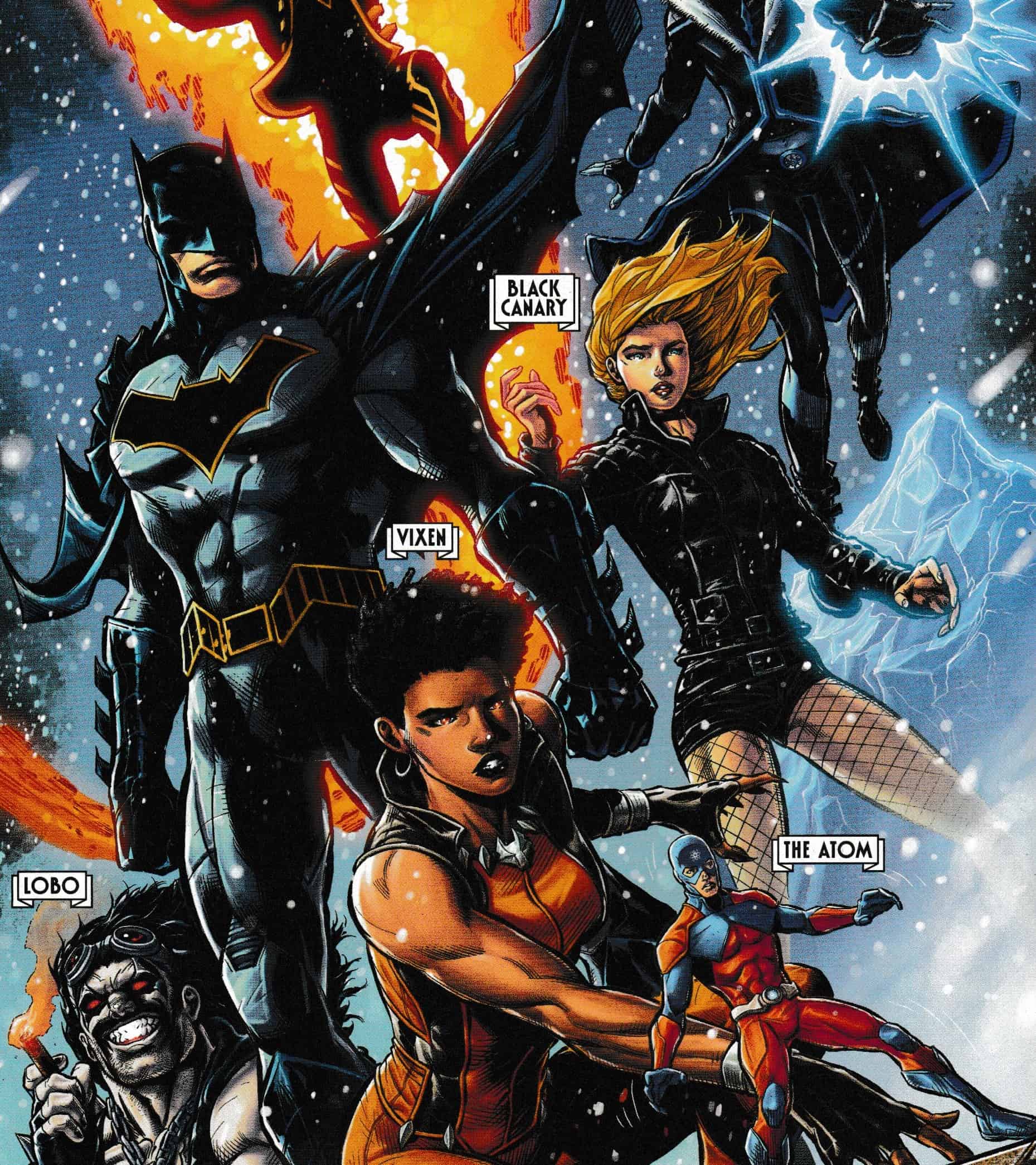 As the crisis is unfolding and Cyborg is under heavy scrutiny, Jessica Cruz watches the news from under her blanket, still mortified over kissing Batman.  But she suits up and heads to the Watchtower where she finds J’onn, the Martian Manhunter.  He needs the Lanterns’ help so Jessica and Simon fly off with him.

It couldn’t have come at a worse time, though, as the League now has to respond to Batman’s call for help but they are without the Lanterns.  Wonder Woman, Superman, and Flash head down to help while Cyborg (with the lawyer by his side) remain on the Watchtower.  However, the League seems to focus on only a single area of the city…the rich, predominantly white area.  And this hasn’t gone unnoticed.  Cyborg gets a call from a friend of his father’s, announcing that the poor people seem to have been overlooked.  Cyborg decides to get down there to lead them.

The lawyer stays behind, but she’s not what she seems.

What Just Happened?
When I read this issue for the first time, I found myself immensely bored with it and disappointed that Ian Churchill wasted his pencils.

As I read it for the umpteenth time, I find myself really admiring parts of it, really enjoying what Priest is trying to get across.  And ultimately, the tweets are what do it for me.

Imagine the League in our world; in a world where we don’t have the luxury of reading about them for years, being third party omniscient observers.

Instead, imagine being an outsider, watching them only through news reports, occasional appearances, and C-SPAN.  Now, some people might reserve judgment, but let’s face it…that’s not most people.  So instead, we get tweets of how it’s great for the League to finally have a black leader and we get the opposite…where it’s viewed as Affirmative Action at its worst.  The League has to prioritize where the worst of the damage is, so they fly past the poor part of town, but it’s viewed as them giving preference to the white people.

And it’s not just the race relations that are causing problems.  Even as Superman tows the train away, someone tweets how that will bankrupt farmers because the chemicals will ruin the crops.  No matter what the League does, somebody wants to complain about it, which is a perfect view of today’s world.  It’s like the cliché:  you can’t please everyone.  Because some of the tweets praise them, some demonize them.  Priest is clearly going for a real-world feel with the League.  If they existed in today’s world, I could definitely see this as a scenario.

Except for the Fan.  Oh, the Fan.  I might be coming around to this story arc, but seeing the Fan in those first few pages…ugh.  He’s not necessary for this story.  Yes, his killing of the Congresswoman allows Congress to persecute the League, but let’s face it:  they could already do that.  It almost feels like the Fan should be an entirely separate arc.  It’s not all bad, though.  The Fan, to me, is clearly a stand-in for Priest himself.  Let’s face it, he’s doing what he’s doing to the League to show where they are most vulnerable.  And they can’t actually do anything about him.  He is Priest.  Maybe not intentionally or maybe not overtly, but I do think the Fan represents Priest’s attempt to do a meta-commentary about the entire concept of the Justice League.

And then we get into Priest’s overuse of scientific jargon.  I don’t think Priest understands how those chemicals interact.  Honestly, it reminds me of an old scene from the original Transformers series.  Mixmaster is trying to decide how to melt through rock to get into the Autobots’ base.  He’s debating between using Hydrochloric Acid, Sulfuric Acid, some other acids, and finally decides he’ll just combine each of the worlds’ strongest acids.

And so Priest overplays his hand…again.  It’s not a huge gripe, but he seems to do this a lot.  He tries to make it sound more intelligent than it really needs to be and in the process, he bogs down the story with needless exposition and facepalms.

Still, overall, a definite improvement over the previous books.  Yes, part of it was due to Churchill’s amazing pencils, but I do think the focus on the public’s perception and the League’s problems with Congress are what was needed and I ended up really enjoying myself.

Final Thoughts:  Churchill gives outstanding pencils as Priest puts us into a twitter barrage that reminds us how the League would fare in the real world.  It’s more of an openly political issue than we might normally see from comics, but it’s definitely a fun read, even if we don’t see Superman super-punching anybody.  And it most definitely will make you think.