JUSTICE LEAGUE LOST, PART 2:  With all the trouble from the Fan, the League is now dealing with the public and their perception that the League only cares about the wealthy of society.  Cyborg, as the new League leader, is doing his best to help those who need helping, but is he cut out for the job? 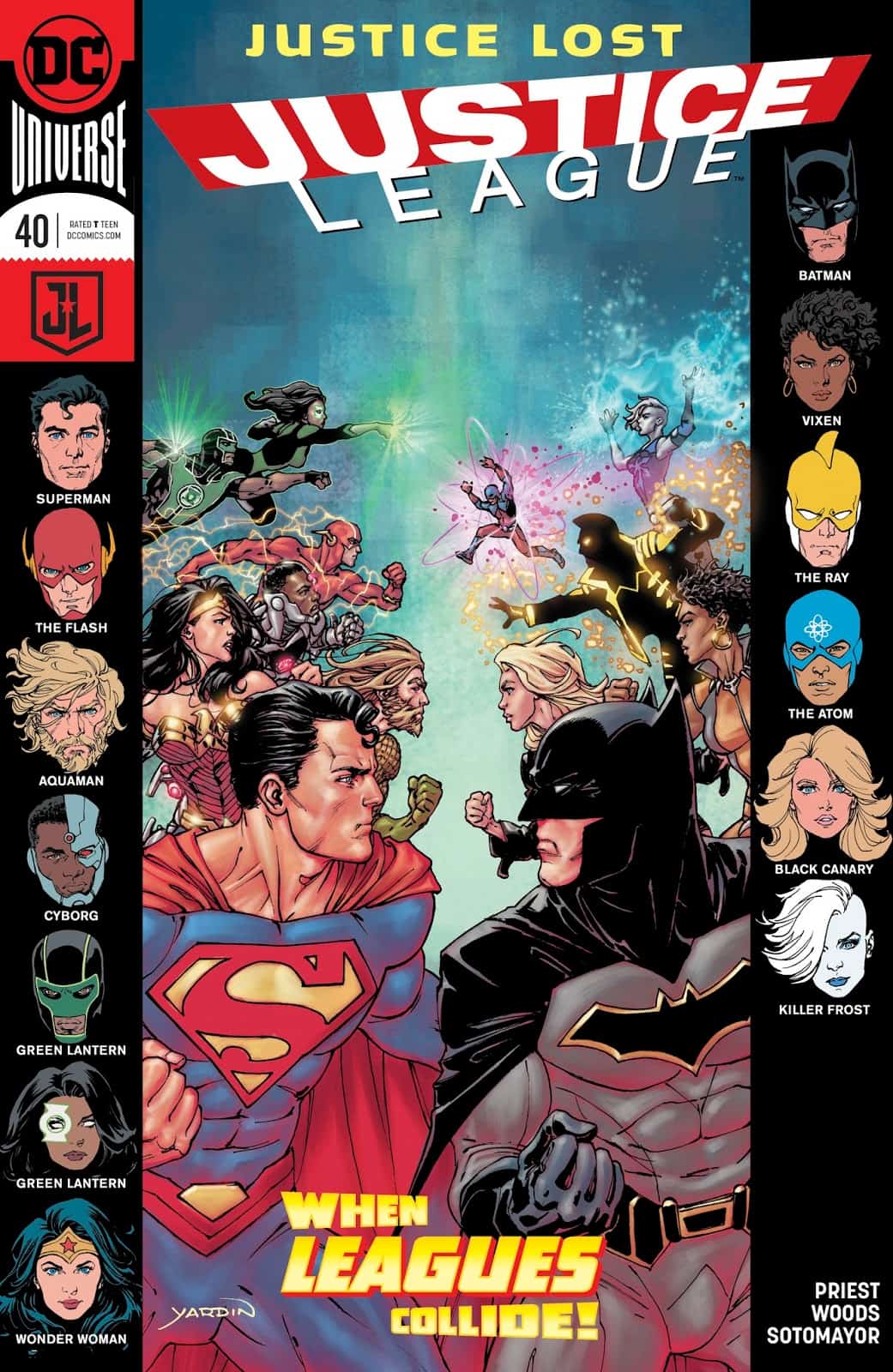 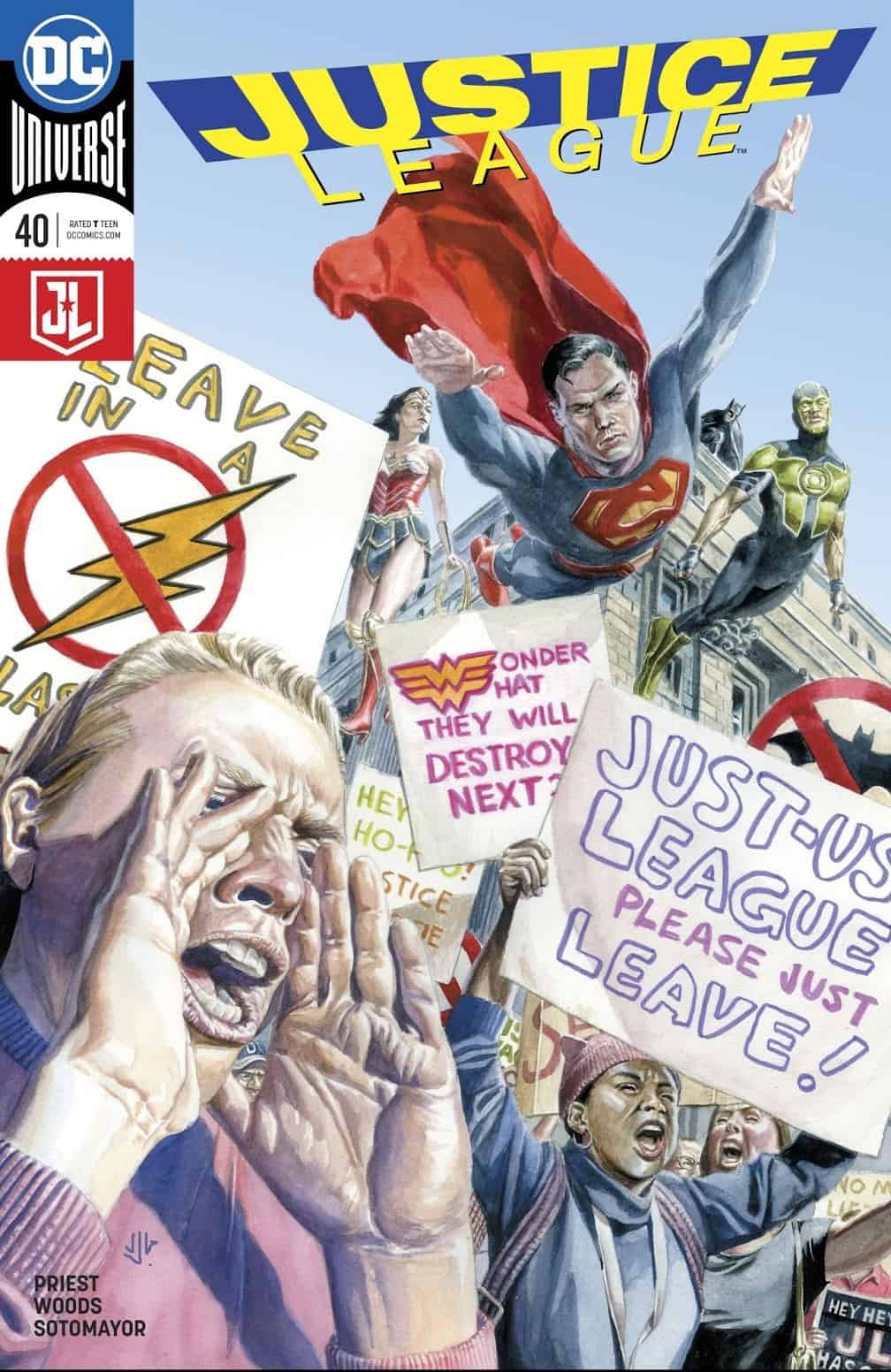 The Fan continues to harass the Justice League, trying to “help” them.  Thanks to his interference, Batman has been ousted from the League but before it happened, Batman named Cyborg as his replacement.  Cyborg is having some difficulties, though, as the public is slowly turning against the League.  When hazardous chemicals are spilled and the League spends most of their time on the wealthy/white side of the tracks, things get worse.  Cyborg decides enough’s enough and teleports down to have the League focus on the poorer people.  Unfortunately, he misses the fact that his attorney, who traveled with him, is not a nice person.

Cyborg arrives, to the confusion of both the Justice League and JLA.  The train fire has already been contained, but the populace, particularly the poorer, black populace, is unhappy.  They see the League preferring to help the rich, white citizens.  Even the police and hazmat teams went to the north side of the tracks first.  Of course, as Cyborg tries to explain, this was because the wind pushed the chemicals north of the tracks and this is where the bigger problems were.  But the citizens aren’t caring (as they’re chanting “Ferguson”). 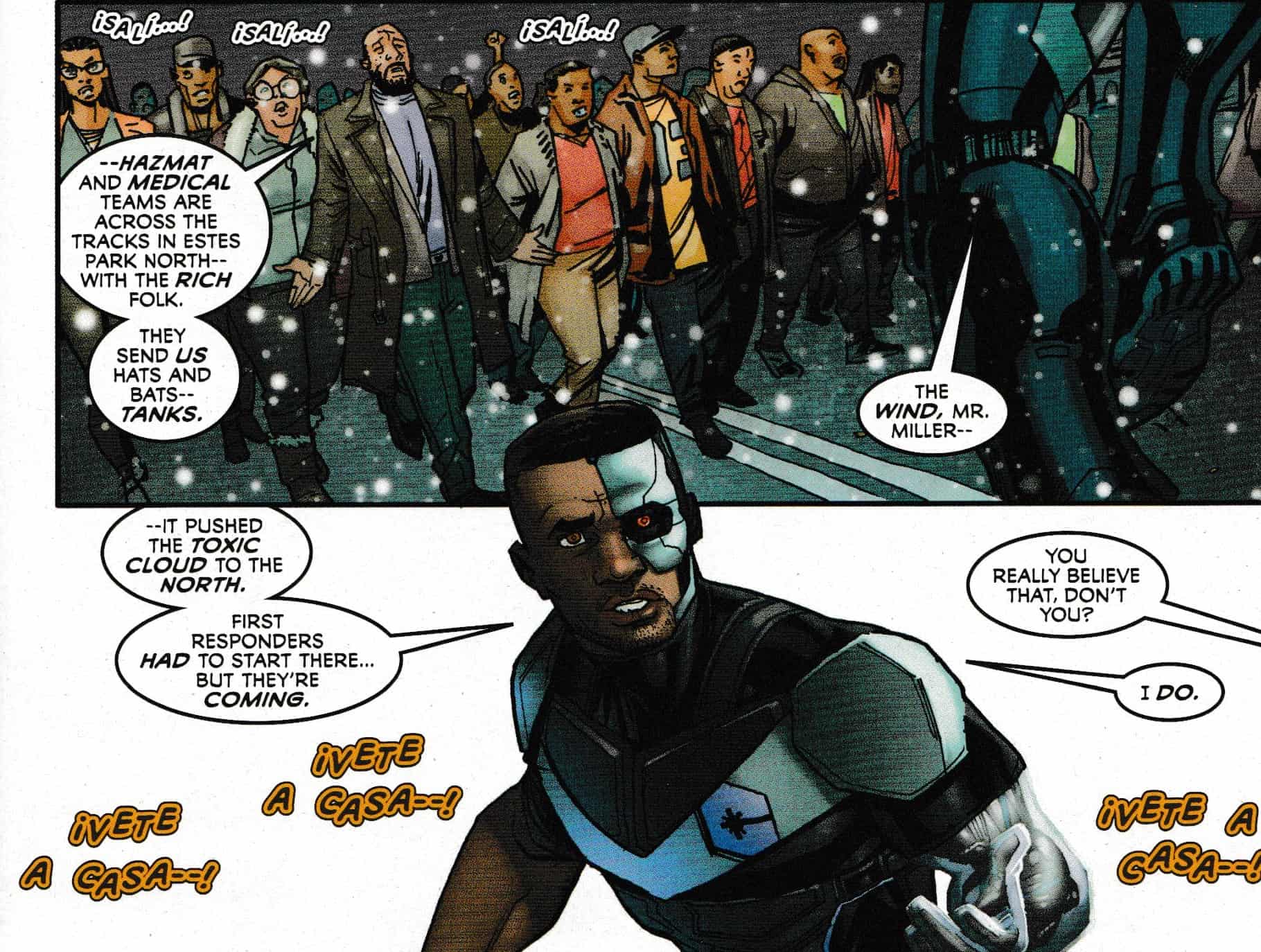 With the north side contained, the emergency vehicles now respond to the south side of the tracks.  Cyborg is about to order his team to help, but Superman steps up, suggesting that they leave instead.  The problem is if they leave it will look like the League doesn’t care about the poor people.  But Superman points out how the League will just be in the way of the first responders.  This starts a debate amongst the Leaguers.  Batman wants to leave, but Black Canary thinks it’s easy for a billionaire to ignore the plight of the poor.  But the League’s discussion is interrupted when the familiar hum of the teleporter sounds.

On board, the Watchtower, the attorney, who is fiddling with the computer systems, finds herself face to face with Aquaman, the only Leaguer left on the tower.  She disables the artificial gravity, she reveals that she belongs to a group of fans (there are more than one, who knew) who are all trying to “help” the League.  In this case, it involves getting rid of the “B” team, who the fans believe is slowing the League down.  As Aquaman pursues her through the Watchtower, the escape pods are jettisoned.  Finally, she makes it to the teleporter and teleports out just as the League (and JLA teleport in). 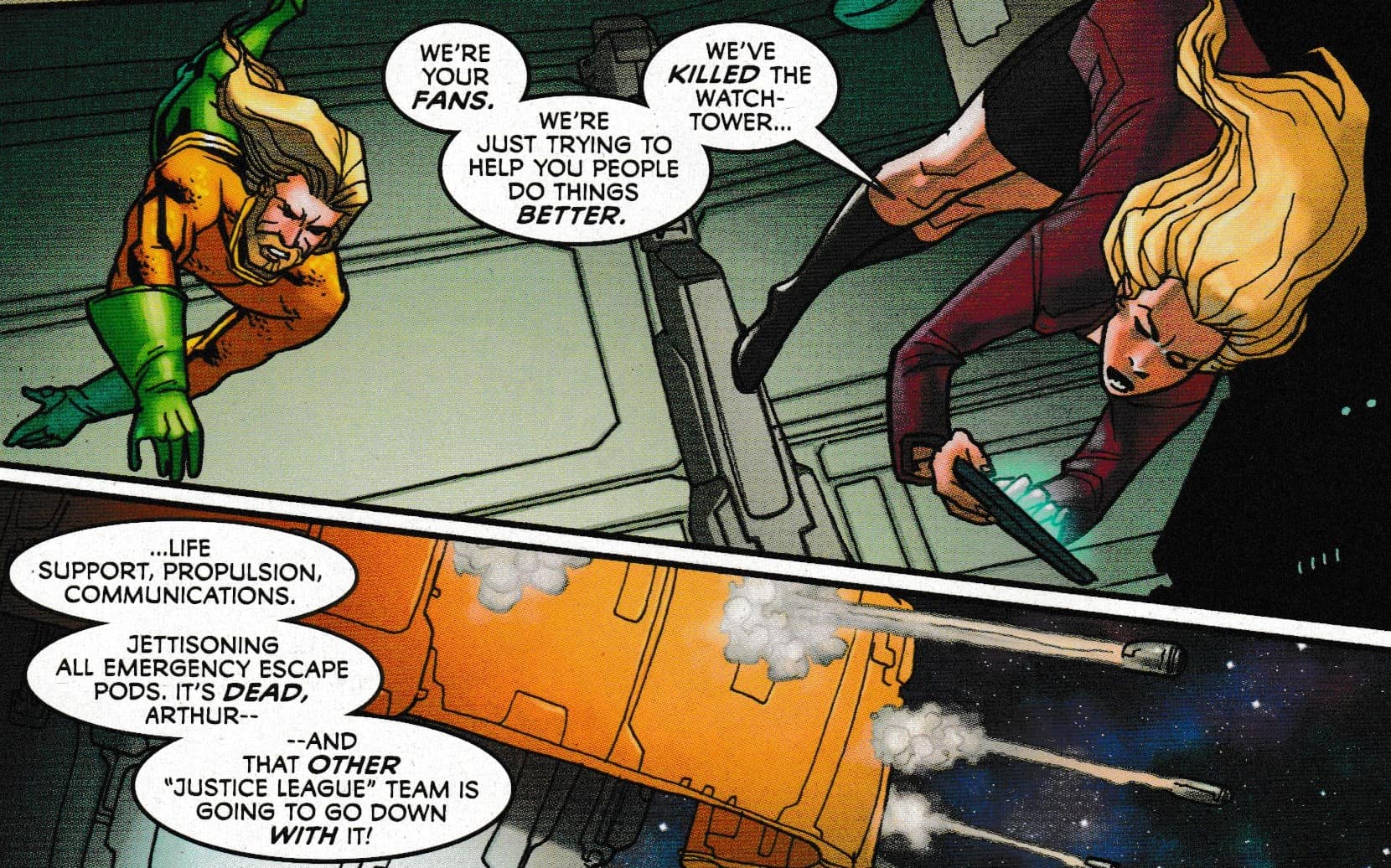 The debate about who the League should have been helping is still going on, but they’re interrupted when Flash realizes it’s starting to get too hot in the Watchtower.  Its orbit is starting to decay.  Ray and Superman speed outside to see what they can do, but at the speed, the Watchtower is falling, they can’t just grab it.  Lobo decides it’s better to just cut and run, jumps out and floats away.  He’ll survive.

The debate is then on how to save who they can save.  Not everybody in the League can escape.  Of course, Frost points out that the big guns will live.  There’s also a slight power struggle between the leadership of the Leagues, with Black Canary wanting Batman to lead, but the League (and Batman) supporting Cyborg.  There’s some obvious hero worship of Superman, but he brushes it off.

Finally, Cyborg decides either they all get off of the doomed tower…or none of them do.  He then goes on about his plan to save them all, with Killer Frost (sorry…now that she’s good it’s just “Frost” now) playing one of the most crucial roles.

With the entire bottom of the Watchtower frozen, they start to enter the atmosphere.

What Just Happened?
I swear….these Priest issues of Justice League are like a roller coaster.  I’m expecting the next issue to be amazing and then the following issue to be horrible.  You know, got to get up to the tall point and then drop all the way down to the bottom.

It’s not a horrible issue.  Like most of Priest’s books, it’s taken me a couple times reading it through to really get a handle on it.  And like most of Priest’s Justice League run so far, there’s not a lot of action.  This isn’t about punching the bad guy.  So don’t look for a lot of action.  And while that often bugs me, this issue delves into a lot of societal and political issues which means that in part I really enjoyed this issue…once I read it for the third time.

See, the biggest problem with the book, and what is a major turn off while reading this, is the art.  No matter how good a story is, if the art is bad, it’s really hard to get into it.  Comic books are a visual medium.  And Pete Woods is lacking in so many ways.  This may be his worst contribution yet during this run.  The characters are static, lacking in detail, and boring to look at.  Every single panel just seems to scream “rush job”.  And while that may normally be an excuse for a bi-weekly book, Woods got an issue break since Churchill took over for one release.  So what’s his excuse?

But if you can get by the bad art, it’s not a bad issue.  Yes, there’s too much of Priest’s attempt at technical talk (when Cyborg and Atom are explaining how they will save the Watchtower), none of it makes any real sense.  It’s not that it goes over my head.  It’s that Priest makes the mistake he made last issue in he tries to give too many details.  Comic book writers aren’t scientists.  They usually try and avoid those details with good reason.  And yes, I’ve seen it before where they try and get into detail and it fails every time.  Maybe I wouldn’t care too much if it weren’t so blatant. 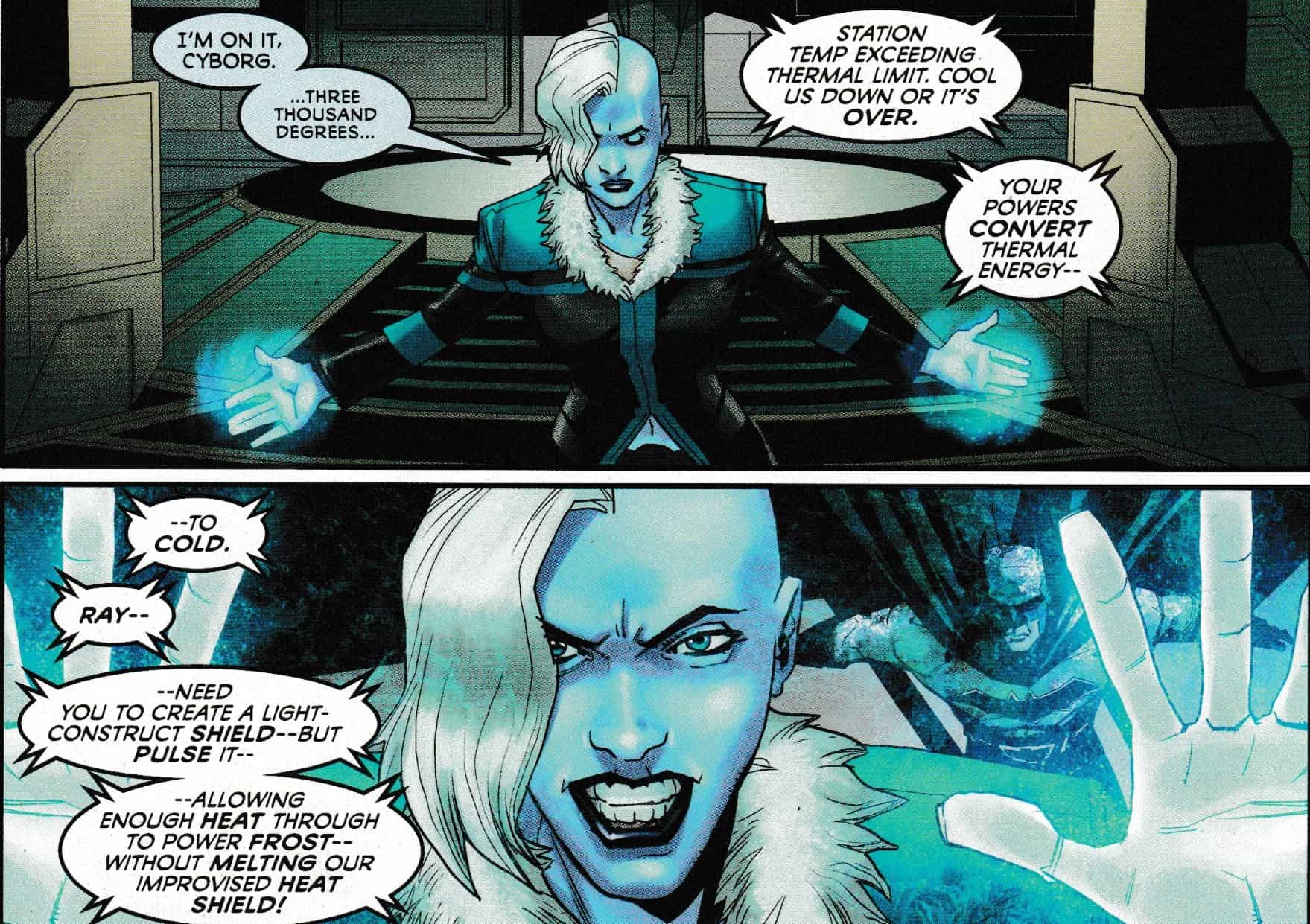 Still, this issue continues Priest’s dissertation on the status of superheroes and the divide in society.  Often there’s a perceived divide between the rich and poor and between black and white.  And the chanting of Ferguson (if you’re not sure what Ferguson is, Google “Ferguson, MO”) adds depth.  The black citizens are clearly disenfranchised, even if there was a very good reason why the League and first responders to help out a particular side first.

And even within the League, there’s some interesting things going on.  There’s the talk of the big guns surviving (this usually refers to Superman, Batman, Wonder Woman, and Flash).  They’re necessary and the rest of the League (both them and the JLA) are all expendable.  Of course, none of the big guns agree.  Superman, once again, is worshipped as a god and reminds them that he’s just a man (honestly, I’m getting a little tired of this reaction from Superman but I don’t blame Priest as this has always been a theme with the man of steel).  But really, would anybody really care if Ray died?  How about the Atom?  How about Cyborg?  I mean, yeah, there’d be a few fans that would be pissed, but it wouldn’t garner anywhere near the attention that the Death of Superman in the 90’s got.

I’m curious, though, where Priest is going with all this.  It seems to be an outlet for all of his criticisms of society and doesn’t really seem to be going anywhere.  There are too many plot strings that are dangling and are they all tied together?  Maybe.  At least he’s roped me into this and I’m willing to stick around to see where he goes with this.

Final Thoughts:  Priest’s interesting commentary is hamstrung by poor art and some needless filler pages.  It’s a good story, but horrible to look at.  I would’ve preferred a traditional book.