King Conan #4: All I Am is Scar and Bone 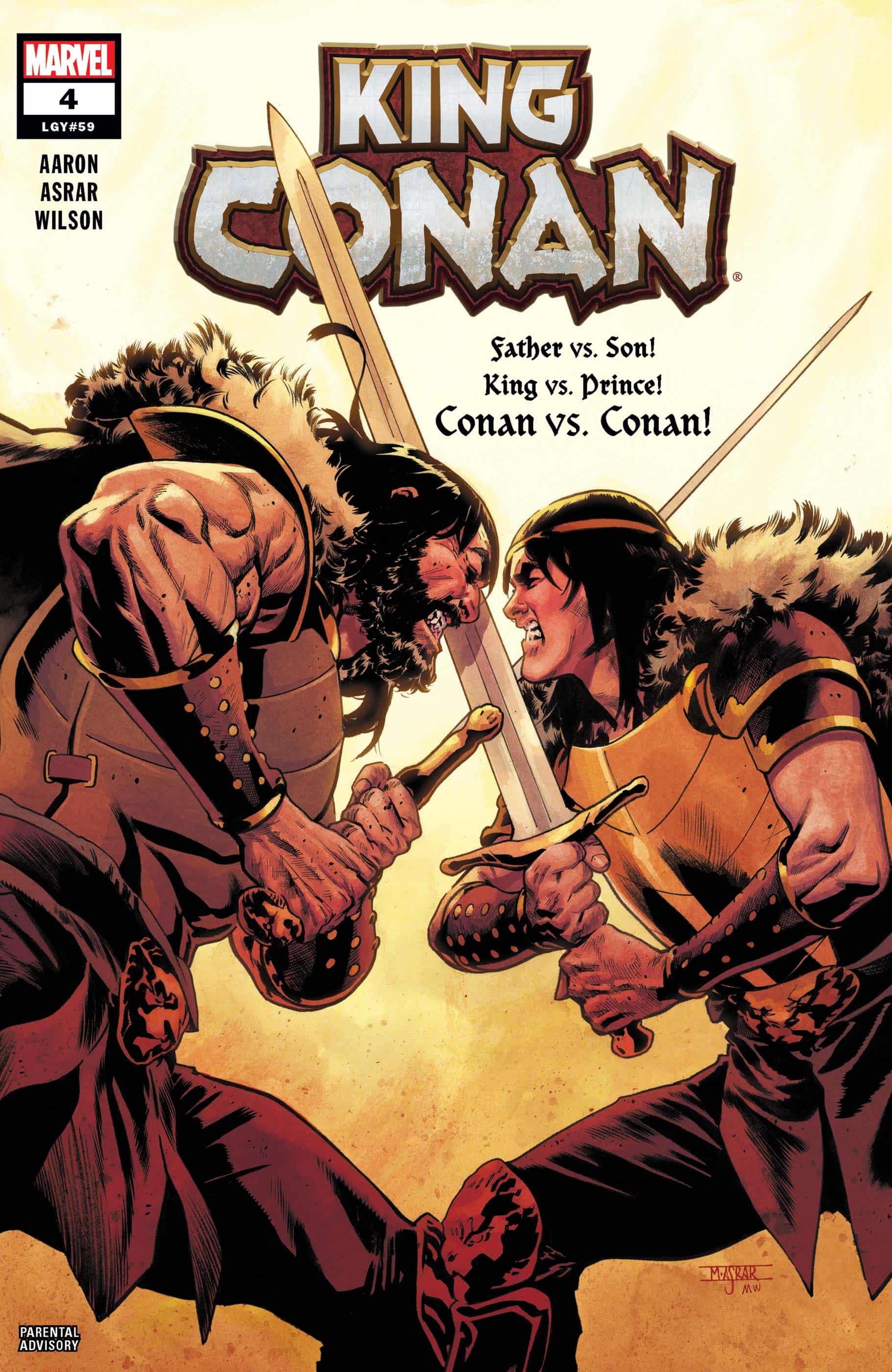 FATHER VS. SON! CONAN fought his way to the crown of Aquilonia…but the most difficult battle is yet to come! Yes, it’s KING CONAN versus CONAN II, A.K.A. CONN, in a duel that will change the course of the Hyborian Age! Plus: The sinister hand of THOTH-AMON enters the fray – is he truly the foe Conan has believed him to be all these decades?

Conan is a character and book that I like having around, I do not read or keep up with all the stories, but I enjoy that it is there. Everyone once in a while I will get that “itch” to dig into some Conan. You know, when you want some sword and sorcery in your life. You want a little “crush your enemies. See them driven before you. And to hear the lamentations of their women.” Type story telling in your life. I don’t want to read it all the time, but I got that Conan itch and King Conan #4 was there to scratch it!

Jason Aaron has been writing Conan since Marvel got the right to the title a few years back and has been crushing it with some spectacular storytelling. Aaron gets the “voice” of the Conan stories to a “t”. It bleeds through the dialogue and the adventure he goes on. Aaron just plain and simply gets Conan and the type of storytelling he needs.

In all fairness as I stated previously I do not always keep up with Conan the Barbarians exploits I pop in and out quite often so King Conan #4 is the first issue I have read in a while and this will attest to what an exquisite writer Jason Aaron is, I had no problems jumping in on the 4th issue of this ongoing story. Aaron gives the reader enough information (plus a small recap page) to get all you need to enjoy the story.

I immensely enjoyed the battle between Conan and his son. Some truly touching dialogue from Aaron between the two and he has some hard hitting notes between the father and son. It also ends in a surprising way that I absolutely loved and rang true for Conan and the story being told, Aaron did a tremendous job in the way it played out through the issue.

Aaron also does an incredible job of flashing back and forth between the present day story of being trapped on this island with his old enemy Thoth-Amon and the flashback story of his battle with his son. Wonderful pacing for the story and letting each build upon one another. 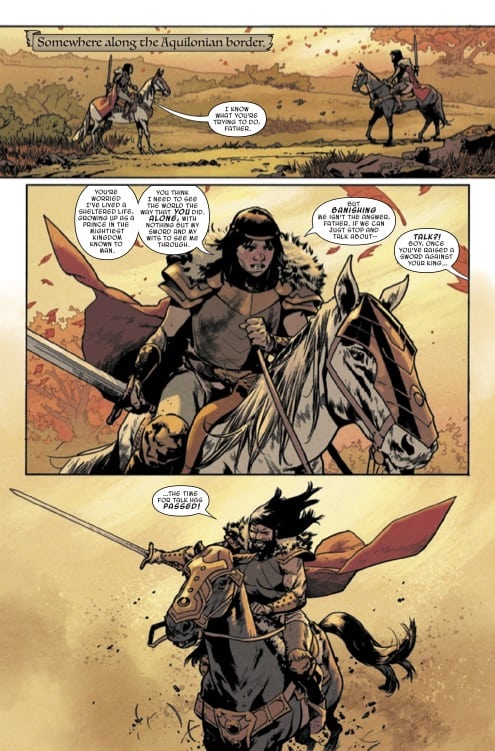 You know it is going to be a good Conan comic when Mahmud Asrar is on art duties. My man has the aesthetics of Conan down perfectly. He is a barbarian, a man among men, the ultimate warrior and Asrar catches all of that. But Asrar also catches the whole emotional range of Conan, especially this older “King Conan” version of the character. Asrar does an incredible job of capturing the integral aspects of King Conan’s emotions as he battles his own son. Asrar does some magnificent visual story telling throughout their battle.

As much as I love emotional storytelling and it is truly the heart of the story being told, it ain’t Conan book without some swords, fighting, monsters, and blood. Luckily Asrar has got all that handled as well. Asrar’s visuals are teeming with energy, there is a delightful sense of movement throughout he still images and some wonderful sequential visual story telling through the fights. Great sense of impact and weight as well.

Asrar does not skimp on the detail either in King Conan #4. His pages and panels are fully brought together with some fantastic world and story setting background detail throughout the issue. I love open field visual of the battle ground between King Conan and son.

Speaking of that open field battleground my gosh Matthew Wilson’s colors are just splendid in it. The field has s beautiful “golden” look to it as Sting would say. The golden field coupled with the fall tempered leaves floating in throughout serves as a stunning visual setting for the battle of father against son. Matthew Wilson captures the elegance of it all superbly well.

This team has been doing Conan together for a long time and whenever they are all together the book shines. Great writing and beautiful art that captures exactly everything you would want from a Conan book. I am not the biggest “Conan fan” but every once in a while I want me some hard hitting Conan and King Conan delivers that and more!

King Conan #4: All I Am is Scar and Bone