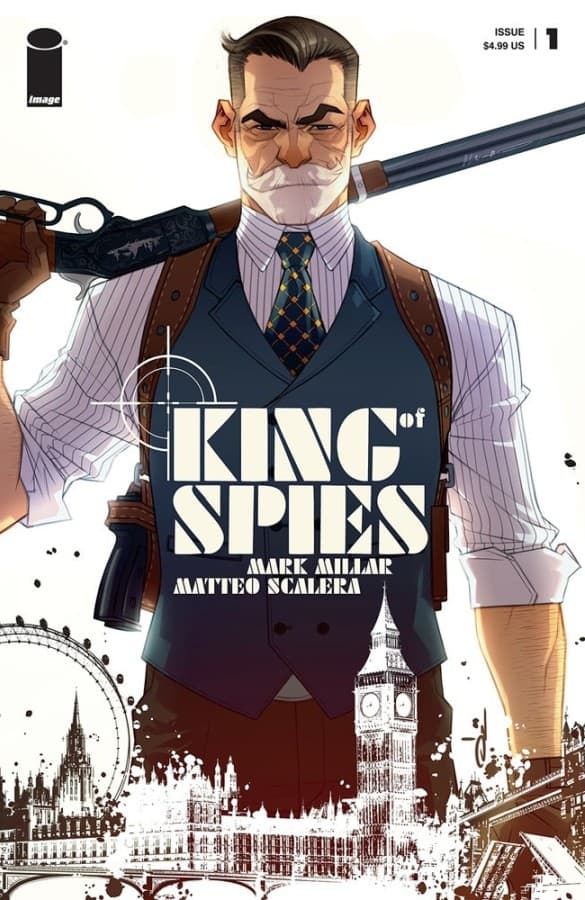 Stop me if you have heard this one before old, withered retired soldier, hitman, spy or certified tough guy is on deaths door and decides for one last mission to try and make things right! Sound familiar? Well, it should and it does and it is the basic starting point for Mark Millar’s/Netflix newest venture King of Spies #1. In it we meet Roland Great Britain’s Greatest spy. Now retired and more of a correspondent Roland realizes his best days are behind and with a new diagnosis knocking on deaths door. With no family (or ones that will speak with him) and no friends of note Roland realizes he has not lead the best life and maybe kept the wrong “monsters” in power. But, with one last gasp left in him Roland wants to set things right.

So, maybe not the most original thing ever, this is a pretty tried and true trope for a story set up which is what makes King of Spies #1 hard to judge story wise. I mean it is a tried and true trope for a reason because it works, but we do not get much besides the basic set up from Millar in this first issue. We get a rocking opening scene and a dazzling ending, but nothing besides the basics throughout the issue

The story set up is not bad or good, it is basically what you expect from the synopsis. We do not get much beyond that. It was fun and exciting to read, but not much in depth or different story wise. I believe it will be the second issue that will really tell us if this story will be something different or more of the same. 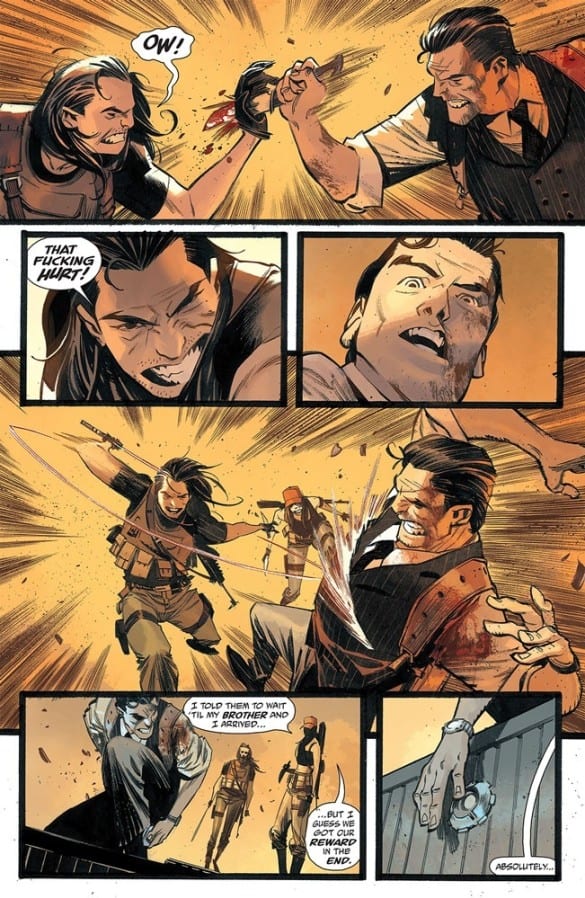 Supposedly King of Spies #1 is The translation of the original Netflix property is written by Millar and will also be drawn by a superstar artist chosen from the comic book world, based on designs created by the team at Netflix with plans is for the story to be adapted eventually into a series or feature. So bravo to whoever picked Matteo Scalera for art duties! Scalera is one of those artists that I have to at least flip through the pages when I see their name on a book. It is actually the only reason King of Spies #1 stood out to me.

Scalera has that wonderful style that feels elegant yet rough. His art feels “sketchy” yet vividly detailed from backgrounds to the beautiful rendered character wardrobes. His panels are buzzing with energy and his panel angles and views bring a wonderful sense of movement and speed to the pages. Great character designs throughout the pages as well. Roland has that old yet still spry enough to be believable old man look.

Scalera gets to let loose throughout the first 14 pages or so. It is a wonderful opening few pages that get the heart pumping and gets you into the story. Scalera does these action sequences superbly well, choreographing the movement perfectly. He also captures the dramatics of the series with some tremendous facial expressions and character acting.

Colorist Giovanna Niro is the perfect person for the job. Niro captures the gritty yet elegant world of King of Spies #1. The colors throughout have a darker tone and texture to them, but Niro blends just enough brightness to them to bring the world to life and add a little pizazz to the whole thing. Clem Robins does some solid lettering work throughout the issue as well.

As noted previously King of Spies #1 is a hard judge after the first issue, it does not offer up anything besides the basic “one last run” story. Will Millar switch up the format going forward and give us a different twist, only time will tell. Story wise though it is serviceable to the genre an exciting read, but nothing of real substance yet. The saving grace is that delectable Matteo Scalera artwork; it alone makes King of Spies #1 at least worth a flip through just to gander at its beauty.