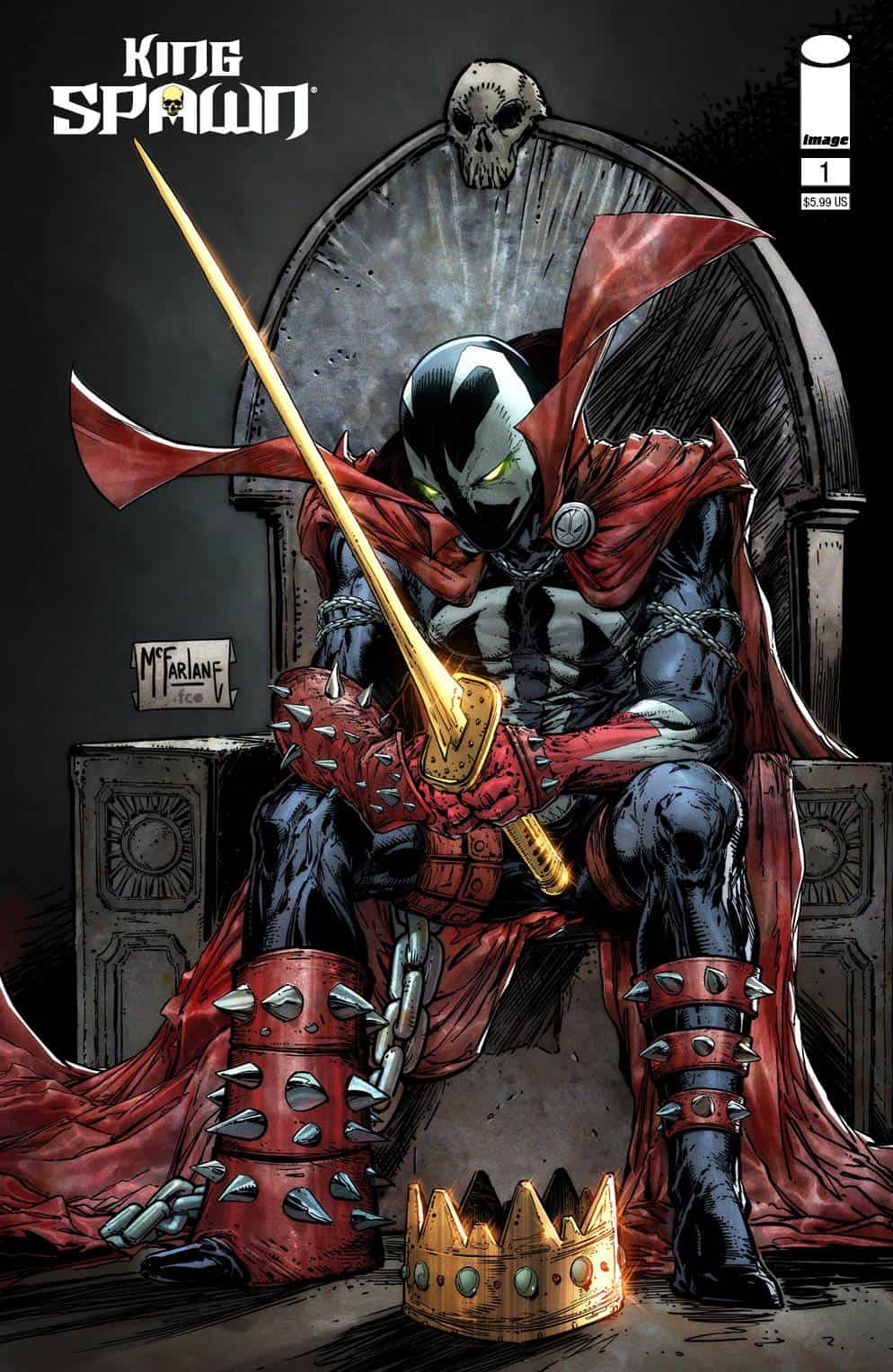 30 Years in the making! King Spawn #1 sees an old foe, and Spawn reunite for what is sure to be an earth-shattering and historic first issue.

Not since the forming of the Fellowship of the Ring has a journey been so enduring yet rewarding. For years, fans have subscribed to the many facets of Spawn and its universe. Sam and Twitch, Angela, Gunslinger, and others have enjoyed their cult status among the fandom for quite some time. Then the announcement happened. Spawn’s Universe. Uncle Todd made good and is expanding the beloved universe and spawning ongoing series’ based on the hellish fan favorite. Not taking the task of the cardinal issue lightly, Todd has enlisted some elite and up-and-coming names to join him in this monumental endeavor.

King Spawn is here. Joining the ranks on this oversized anthology (of sorts) is Sean Lewis (writer, King Spawn), Javi Fernandez (art, King Spawn), Stephen Segovia (art, Haunt), Marcio Takara (art, Nightmare), Philip Tan (art, The Hero), Brett Booth (art, Gunslinger), Adelso Corona (ink), Daniel Henriques (ink), FCO Plascencia (colors), AndWorld Design (lettering), as you can see Uncle Todd has assembled a team that would make the Avengers drool in admiration. We have the hype, we have the sales, and we have the talent, now let’s dig into King Spawn #1!

Sean Lewis’ brilliant pacing sets the mood for a hellish and frightening story that will resonate with horror and Spawn fans alike. The book starts with an event (spoiler-free!) that sends chills down the reader’s spine but does keep in line with the familiar tone that we’ve come to love about Spawn. Brutal with a side of gore is what we’ve come to expect, and this issue delivers. Spawn realizes that the angels and demons are at work but soon finds out that it’s not that simple and there’s a much stronger force at work. Much like the writing, the art is equally phenomenal. I’ve always said that horror needs to be smooth in its delivery. Anyone can depict a head exploding, but not everyone can deliver the goods. Javi Fernandez is a man possessed with artistic passion, and it shows on every panel in this book. There is so much amazing content in this first issue; it would make this review at least three pages; however, we’ll try to keep it as compact as possible. Taking a page (maybe, maybe not) from DC and doing “mini-anthologies” adds a certain depth and offers new readers and returning readers a chance to discover and rekindle new characters. Haunt, Nightmare, The Hero, and Gunslinger wrap up this magnificent first issue while not taking anything away from it. These small offerings ooze with the same passion and desire as King Spawn and serve as the perfect side dish to this five-star offering. If future issues continue in this style, I would not complain.

This book has something for everyone. New and old fans alike will devour King Spawn like starving vultures. It’s no surprise how well this book is selling and when you read it, you will know why it’s selling like it is. We can talk speculation all day, but the fans have been clamoring for something like this for years, and Uncle Todd has answered our tormented hellish wish. The king has arrived!

As a long devoted Spawn fan, it was hard not to drool all over this review. There are some of my favorite creators telling a story that I never tire of. Whether it is the depth and passion that Sean Lewis writes with or the magnificent art of Brett Booth or Javi Fernandez, or Philip Tan, King Spawn #1 was the perfect offering, post Spawn’s Universe.