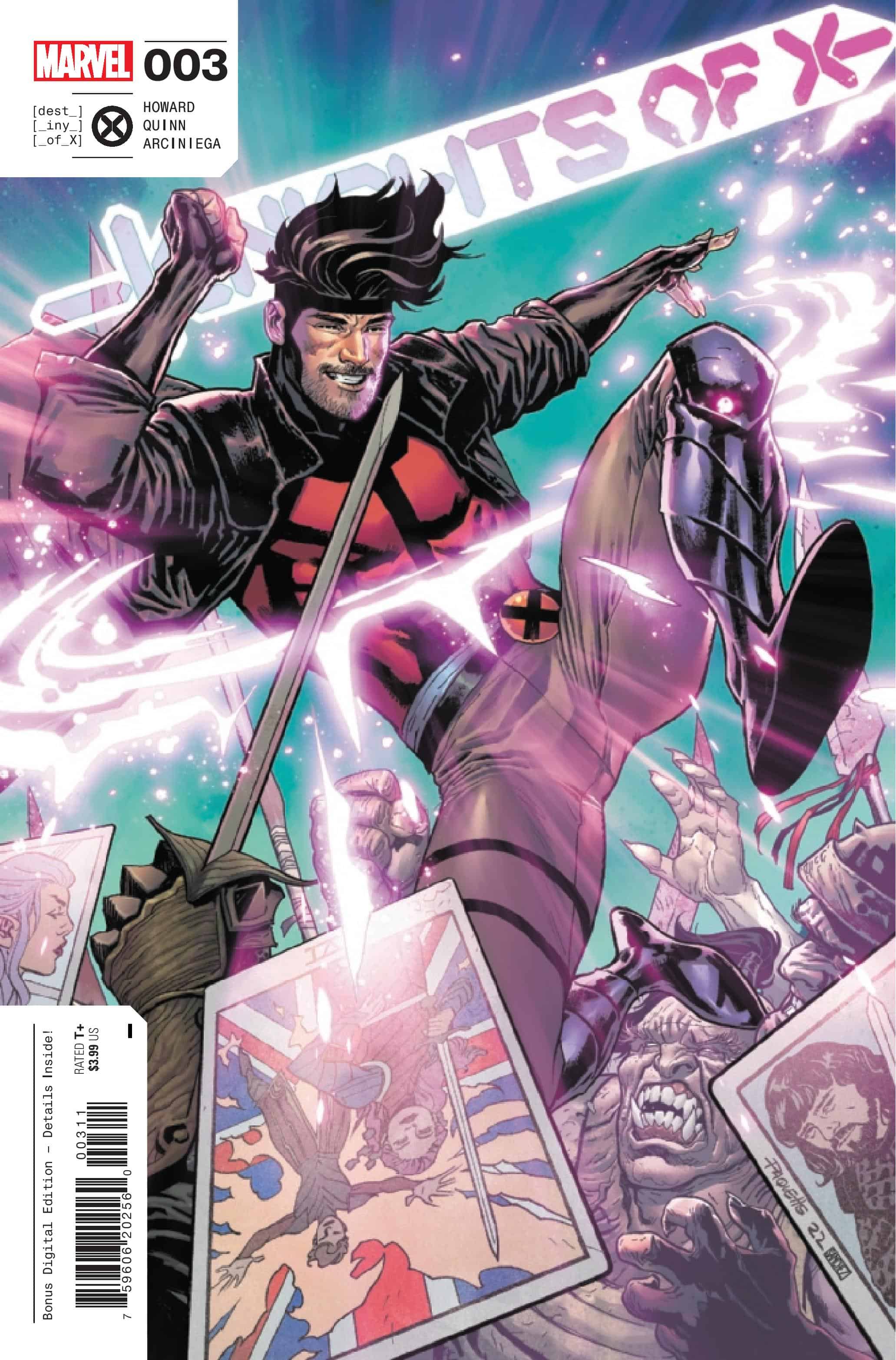 THE FALL OF THE KNIGHTS OF X! Gambit and his team gain a momentary victory over the Furies in Crooked Market, but as the group is hit by another wave of attacks by Merlyn's army, Rachel Summer's connection with Captain Britain is severed before she can call in reinforcements. In Sevalith, the Captain and her team face off against blood thirsty vampires as they seek out a lethal potential ally. Their quest required ten knights to begin, but no one said anything about the end. A knight dies here - and the hateful quest goes on.

All good (or bad, depending on your position) things must come to an end, but since this is only the middle of our story, let’s be on our way. Tini Howard and Bob Quinn are continuing the former Excalibur members, plus a couple extras tagging along, are knee deep in Furies, while Betsy’s team are trying to remain incognito in Sevalith, aka fang country, aka the land where the vampires reside in Otherworld, as they try to sneak Mordred into Roma’s safe haven from Merlyn’s forces, that include not only King Arthur and his knights, but also the Vampires, and the Furies, and by the end of the issue could we be saying goodbye to one of the Knights?

I’ve had a love/hate with Tini’s X-work since the beginning of the House of X era, with it developing into more of the love than hate by the end of the last volume of Excalibur, so I had high expectations when it came to this mini, and I thought she killed it in the first issue. It was giving me everything that I wanted and needed for an epic adventure in Otherworld with the Capt. Britsy Corps (trademarked), and their band of merry mutant misfits, but this issue was a bit of a letdown. It wasn’t specifically bad, it was just a bit bland, which just kept me from not getting as invested. Even the big surprise at the end of the issue didn’t really register, because I just didn’t care at that point.

So one of the things I’ve enjoyed most from Tini’s run is the journey she’s taken Betsy on from the beginning. Sure, some of it wasn’t great, some of it was just painful to read, but there was a journey that she went through, and she’s a different character than who she was then, which is all I ask. She’s become more confident in her role as the guardian of Otherworld, and determined to do everything within her power to protect her family, and the people of both Earth and Otherworld from the insidious Merlyn, Morgan, the Clan Akkaba, and the deadly Furies.

I also really love the added presence of Meggan, and her role in the war, and Rachel’s as well. I am questioning Rachel and Betts’ relationship, because it came out of left field. Not that I mind it, because this might finally be the validation of Rachel as a queer character after decades of queer coding her, and her relationship with Kitty seems that much more genuine, and fulfilling, so I’m willing to see where Tini’s going with this. I also really love the use of the Askani title. It’s a much better title than the last couple decades of ill fitting monikers, and elevates her on the X-stage.

Bob Quinn’s art keeps giving us some great visuals here, especially with the more fantastic elements of the story, like Shogo transforming into a dragon more on scale of Lockheed’s size, to Meggan using the elements of Otherworld to down the flight of the Furies, it’s just a lot of fun. Sure, Betts’ suit is sooooo basic, and I’m not in love with Rachel’s either, but it’s only a mini series, so I’m sure we’ll get something else after this is all over. Otherwise I have very little to complain about in the art department. Hopefully he just keeps getting better as this story progresses.

It’s a high fantasy story that’s got high risks, but there’s something missing from getting me fully invested. How the final act will affect not only these characters, but characters across the franchise could prove to be an interesting development, but at this point I’m not sure I care. Hopefully the team can give us a final act that was as thrilling and engaging as the first issue of this mini.