Lazarus Planet We Once Were Gods #1: One Story, Three Commercials

Lazarus Planet We Once Were Gods #1 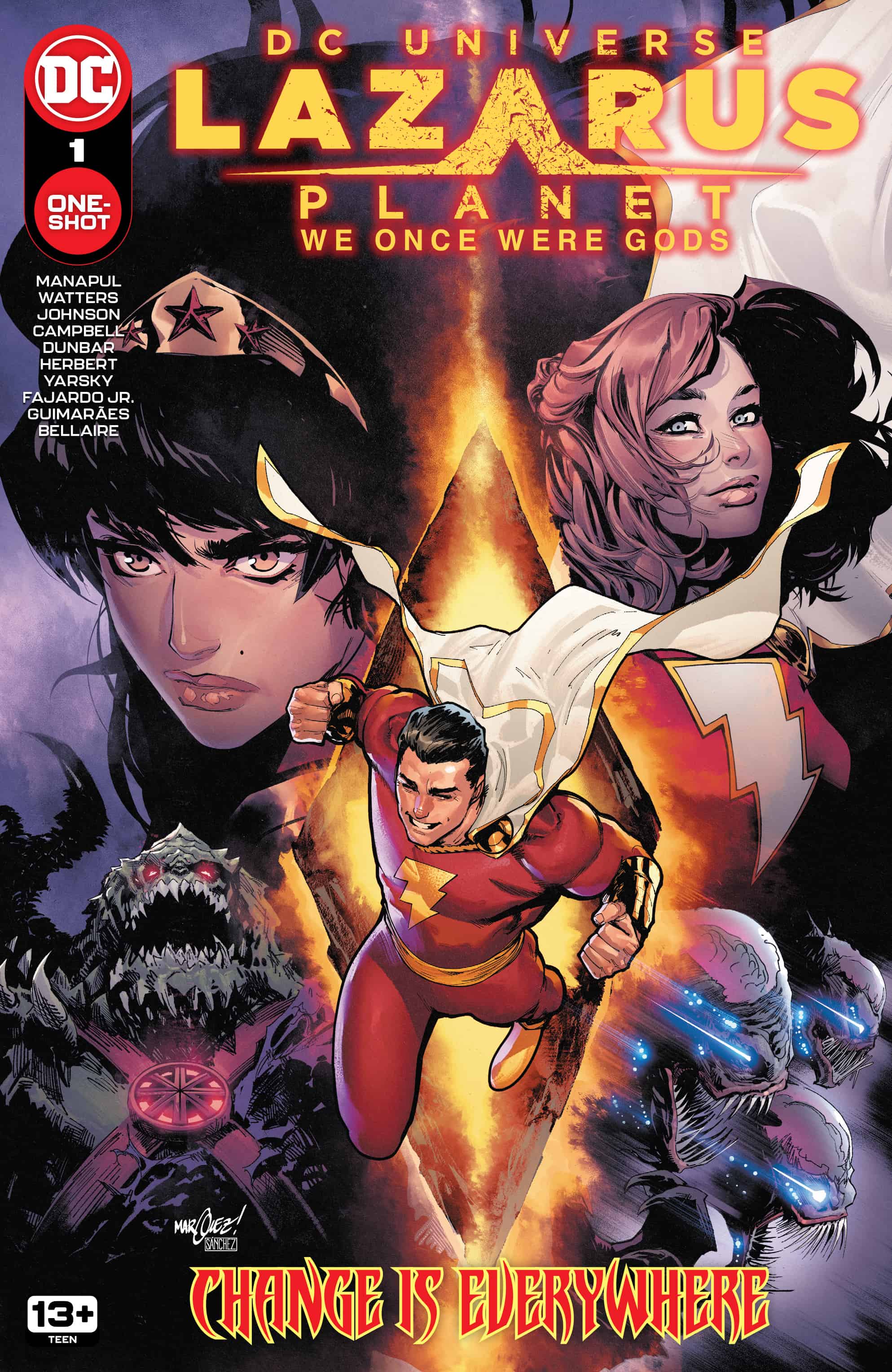 As the Lazarus rain beats down upon planet Earth, human beings are only a fraction of those affected by this transformative upheaval-enter: We Once Were Gods. This series of vignettes explores Lazarus Planet’s effects across the many extraordinary locations and creatures in the DC Universe, and like their human counterparts, these beings are in for some big changes. Can Themyscira survive the resurrection of every invading army that ever graced its shores? Will Martian Manhunter survive a psychic link to a Doomsday nest? What happens when the monsters from the Trench gain the ability to breathe air? And look out, Shazam Family…the Rock of Eternity is about to get rocked.

The first story in Lazarus Planet: We Once Were Gods is an Aquaman story (more or less–out of ten pages he appears on the last three). Most of the story is about a family with a cabin finding an unconscious, unidentified man. When the man wakes up he is essentially feral and doesn’t speak a recognizable language. This story has virtually no narrative. The family saves the man, the man goes feral, Aquaman appears. What it does have is “To Be Continued in Dawn of DCU” on the final page.

Manapul handles all the art in this story, and his coloring reinforces what all the stories keep telling us: that the eruption of the Lazarus Volcano is impacting the entire world. The sickly green, bordering on a horror story feel, pervades every panel. The place that Lazarus Planet Alpha succeeded most was presenting a borderline horror vibe and Manapul replicates that nicely here.

The second story is a stand alone, and doesn’t really fit in with the gods theme. J’onn J’onzz is in space observing the chaos from the Lazarus Volcano eruption. Out of all the chaos J’onn focuses on an individual (to listen to J’onn, apparently the only one on Earth) who is using his newfound powers to help people. This man, Raphael Arce, is in Metropolis and using new empathic abilities to heal the sick and injured. J’onn approaches him because Arce is also capable of absorbing memories and as a result is channeling the memories of Superman’s death and morphing into Doomsday. This is the single story of the four that does not continue into another series. Unfortunately the story has a painfully weak ending. Watters is trying to tap into a theme of sacrifice, where Arce’s empathy is such that he gives of himself to save everyone else. But it’s such a writer-manufactured threat that it’s hard to take that sacrifice seriously. And Arce’s condition at the end merely invites a chuckle.

The art in this story is fine enough though it does not really stand out. Dunbar does a good job realizing the different Doomsday looks, but they don’t really rise to the effectiveness of the original. They might have worked better if Fajardo Jr.’s coloring was closer to a horror sensibility rather than just an ordinary rainy night in Metropolis.

Wonder Woman features in Lazarus Planet: We Once Were Gods’ third story, and of the four it deals most directly with the Lazarus eruption. Diana is training Bia on the shores of Themyscira when Bia is pulled under the water by the Armies of Herakles, the war dead. The rest of the story is the Amazons fighting these dead soldiers with the promise of yet more to come. This story continues in Lazarus Planet: Revenge of the Gods.

Herbert delivers the best depiction of emotive characters here. Diana and Bia especially are expressive, and there is nuance in their depiction. Somewhat strangely, especially since the Amazons are fighting dead people, the overall coloring is one a nice bright day seemingly unimpacted by the Lazarus Volcano eruption.

Lazarus Planet: We Once Were Gods’ final story is by far the most complete as a narrative. It still ends with a continuation into Lazarus Planet: Revenge of the Gods, but it fully completes its story. That story features Mary, the Champion of Shazam, and Malik, the heir to Black Adam. They’re on their way to the Rock of Eternity to rescue Billy Batson who was bound inside the Rock. The three find a resolution to the conflict, and while the story cuts away to a final page designed to create a cliffhanger, the plot involving Mary, Malik, and Billy is concluded.

The visual strength of this story are Yarksy’s layouts. When Malik and Mary race toward the Rock of Eternity and while they’re inside, Yarksy lays out panels at a variety of angles and in several cases moves behind a four-sided shape for them. It creates a chaotic feeling that feels right at home dealing with this purely magical plot.

Lazarus Planet: We Once Were Gods is not much more than an advertisement–and a worse one even than Assault on Krypton. Every one of the stories is carried by the art even when the art is fairly ordinary. Like Assault on Krypton before it, there is really only one story that tells a complete narrative–in this case the one featuring Mary and Malik. To its credit, the story featuring J’onn J’onnz reaches for significance in its attempt for a serious theme, but there isn’t enough space for it to feel anything but contrived. The remaining two stories are not much better than what you might find on Free Comic Book Day. And something that costs $4.99 should not have material akin to something found on Free Comic Book Day.

Lazarus Planet We Once Were Gods #1: One Story, Three Commercials