Legion of Super-Heroes: Millennium #2 (of 2): The Girl From God Knows Where

Rose and Thorn continues her long, winding road through the future history of the DC Universe. The longer it goes, the wearier she becomes, watching humanity make the same mistakes over and over again. Along the way, she meets some very interesting (and perhaps familiar) characters, such as the janitor with a fixation on 20th/21st-century superheroics... 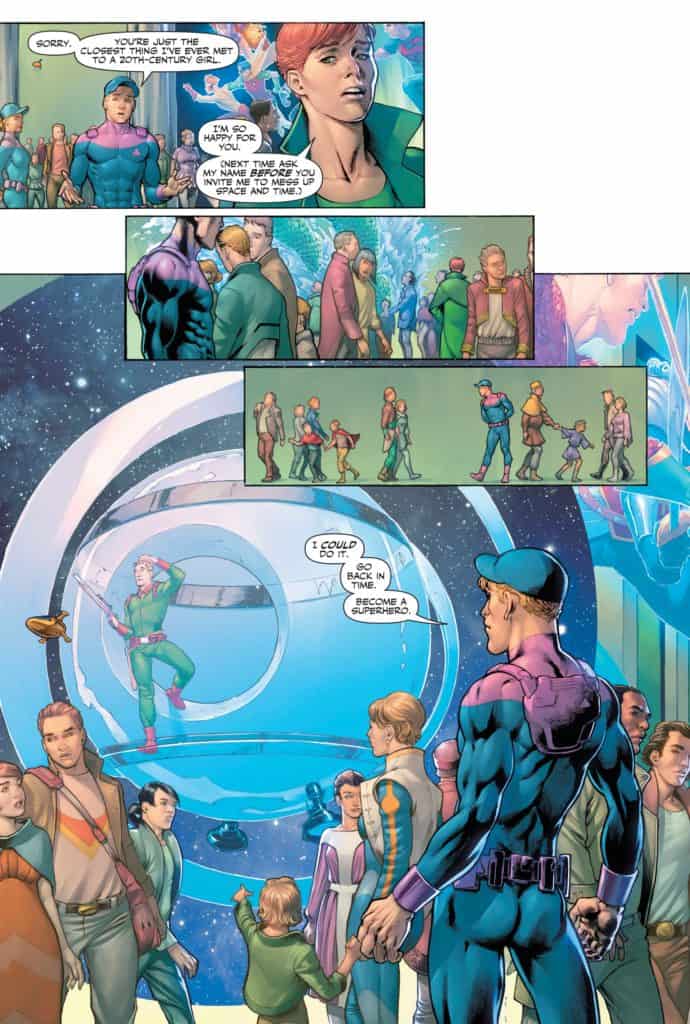 ...and the mohawked resistance fighter from a freedom-starved dystopia.

Eventually, she leaves Earth out of frustration, sick of watching humanity make the same mistakes over and over. 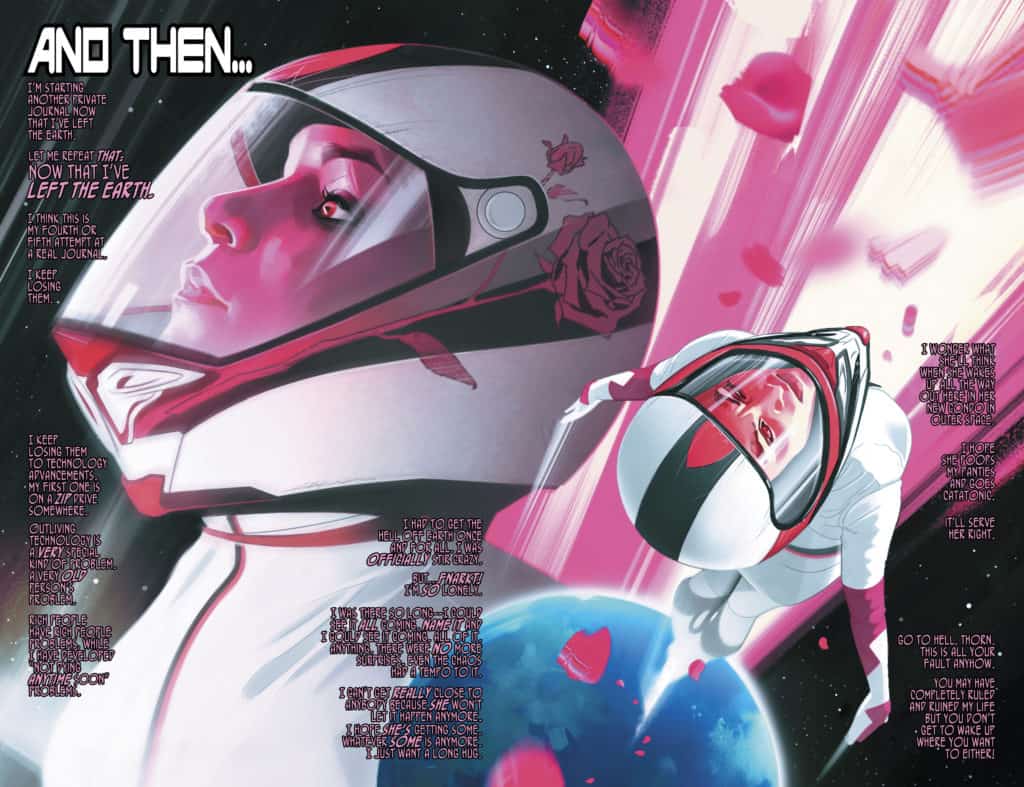 After who-knows-how-many centuries exploring space and realizing that alien cultures are making the same mistakes, too, she realizes what she has to do...

...return to New Earth, and warn its - and the United Planets' - youthful protectors about everything she's ever seen... and how they can prevent that cycle from continuing to perpetuate!

Looking back on last month’s Legion of Super-Heroes: Millennium #1, it could easily be said that what was most crucially missing from its scattershot story was a thematic throughline. The set up was too randomized, with Rose/Thorn jumping from one iconic era of DC’s future history to another with very little connective tissue other than the main character, whom writer Brian Michael Bendis did very little to shore up as someone readers should care about. This created a less-than-cohesive read that, while containing a vast number of hooks and potent storytelling elements, failed to bring them together in a meaningful way.

That mistake is corrected with a vengeance in issue two.

Almost from the first page, Rose’s desperate cry is heard throughout: “‘Why me? What is the point of me living this long?” Throughout her long, lonely existence, she has borne witness to the countless blunders and evils and incalculable mistakes of mankind throughout history – over… and over… and over… and over again. She’s sick of it. The wheel has continued to turn, and it’s left her ground beneath it many, many times. So she eventually chooses to abandon Earth – and is crushed to discover that humanity’s flaws are replicated throughout the cosmos. Mankind, it seems, is not so unique in that regard after all.

All of which leads to her return to Earth (or rather, New Earth, since it’s literally a new planet being constructed from scratch) after a stunning epiphany: she and she alone knows the playbook, how things will inevitably turn out. And she must share that knowledge with the the only people capable of doing something about it: the Legion of Super-Heroes, who on that very day are inducting Superboy into their ranks (picking up right where the last issue of Superman left off!).

It is, in a nutshell, the perfect backdoor reintroduction for new readers to get to know the Legion.

If you’re unfamiliar (and the newer generation of readers could be forgiven for having less than passing familiarity with the team, as they’ve been wholly absent from the majority of the past decade), they are, philosophically speaking, DC’s equivalent to Star Trek. (Although it should be noted the Legion’s debut beat Gene Roddenberry’s classic’s by eight years.) They represent a future that’s built on hope and acceptance of differences and working together and the pure, unbridled joy found in accepting one another for the content of our character rather than what’s on the outside; the thrill of discovery; and the power of diplomacy over force. You know, all that liberal hippie crap your drunk racist uncle complains about every Thanksgiving. In these fractious times, the Legion are the perfect antidote to our societal discord, because they represent the best not just in humanity – but in all races and species. They’re aspirational without being hokey; positive without being preachy.

What Brian Michael Bendis has done with this issue is give readers an access point as to why the Legion – and their perspective – matter. Given the team’s hard-Silver Age roots and predilection toward endless reboots (not to mention a surplus on super-teams at any given moment between the Big 2 and countless other indie publisher out there), piercing their fandom and continuity can be more than a little intimidating.*

Here, then, is the perfect (funny how I keep coming to that word) opportunity to jump in feet-first with the latest reboot of the team, retooled and reimagined for the modern era. Bendis knows a thing or two about modernizing older concepts for new audiences (Ultimate Spider-Man by Mark Bagley and him is the best Spider-Man run this century, period), and wrote over 230 issues of Avengers that proves he can balance a team book out. And with this issue, he brings along a murderers’ row of artistic talent to bring his vision to life: Nikola Scott (bringing her best work in years), Jim Cheung, Jeff Dekal, and Ryan Sook. Each artist has a style all their own, but – unlike last issue – the styles don’t necessarily clash with one another, bringing a far stronger sense of seamlessness with each turn of the page. The colors by Tomeu Morey and Jordie Bellaire are spot-on as usual, and even Dave Sharpe’s lettering is a thing of beauty that stands out from the typical comic. Here, he uses different font colors to show the conflicting internal dialogue of Rose and Thorn:

Sharpe’s not the first to do something like this, but he certainly makes it shine.

In the end, this comic did exactly what it was supposed to do: get readers interested in the Legion again. Given the symmetrical imbalance of between first and second issue, it was hard to know if Bendis would pull it off. But indeed he did. Folks, get on this ride now on the ground floor, because the Legion of Super-Heroes is only going to get hotter!

*I wholeheartedly recommend starting with “Superman and the Legion of Super-Heroes” by Geoff Johns and Gary Frank, if you’re looking for a reason to fall in love with the team. It’s perfect in every way.

Legion of Super-Heroes: Millennium #2 succeeds mightily in connecting the thematic threads woven throughout this tale, and does exactly what it intends to do: make readers care about the Legion again. It's going to be an awesome ride, folks.

Legion of Super-Heroes: Millennium #2 (of 2): The Girl From God Knows Where