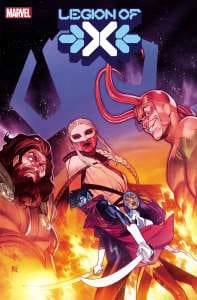 While Nightcrawler and Zsen are busy with some extracurricular activities, the Skinjacker and the rogue god are rampaging across the Island. Can our heroes untangle themselves long enough to stop everyone's psyches from imploding?

I have to say, once again, how disheartening it is to see a writer who has no understanding or interest in the mechanics of faith write about it so badly. Spurrier’s entire thesis seems to be, “Nightcrawler has faith because he’s lying to himself: if he believes in his own inner power instead of God, he’ll be fine.” There is some truth to that. A person has to know and accept who they are in order to live in a manner that is healthy. But throwing out the idea of faith, the idea of gods, as a weakness in itself is disgusting.

Every character has told Kurt that he’s lying to himself about his beliefs, and he’s admitted as much (via cliché) in this story. The driving force of this book appears to be: you are an idiot if you believe in anything other than your own abilities. It’s difficult, as the practitioner of a religion, not to take offense. Spurrier is presenting the fact of Nightcrawler’s restorative approach to justice (an idea which is sorely lacking in most superhero books, and well displayed in this one) as something that he does despite his belief in God.

It’s more than possible for atheist writers to write well about faith. Spurrier isn’t. If this book were about the struggles of faith within the context of a rapidly changing world, where old beliefs are difficult to hold onto, it would be a different matter. Instead, it appears to be a story about religious hypocrisy and the idiotic impossibility of having faith at all. This is offensive.

There were some really good aspects of this story. I got a kick out of the fact that Nightcrawler is apparently truly excellent in bed. Fans of this character have known that for some time, but it’s nice to see that revisited. David’s daddy issues are fascinating to watch, as is Xavier’s profound lack of self awareness. The effects of the trickster god’s powers (if not, their actions) on the warriors in training were cool to see.

Jan Bazaldua’s art was really beautiful, as is usual for him, and he worked extremely well with Federico Blee’s masterful coloring. Clayton Cowles’ lettering clarified the storytelling without ever distracting from the effectiveness of the art.

This book is something of a mixed bag. The art is absolutely wonderful. Spurrier handles his pet characters and themes brilliantly. Unfortunately his take on religion as a concept is problematic at best. It’s a solid read, even if the philosophical angles don’t quite hold up.

This book is something of a mixed bag. The art is absolutely wonderful. Spurrier handles his pet characters and themes brilliantly. Unfortunately his take on religion as a concept is problematic at best. It's a solid read, even if the philosophical angles don't quite hold up.