Legion of X #5: A New Covenant 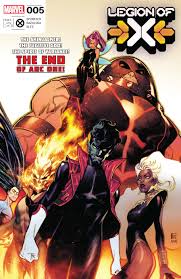 The unnamed God has revealed himself, and his first worshipper is on the way to erase him from existence. Can the Legionnaires save... anyone at all or will the Altar and everyone in it be permanently deleted from existence?

Legion of X #5 is a layered, complicated story, one that functions exceptionally well on some levels while failing in other areas. This is not to say that Legion of X is anything like a bad book. It isn’t. It’s very well written overall. Spurrier has a remarkable understanding of the characters that he loves and an even deeper affection for those he creates. He’s made Weaponless Tsen into an absolutely fascinating person. She’s had a full arc over the last five issues: growing from one perspective into another — or at least into the knowledge that there are other valid perspectives out there — without losing anything of what made her so enticing at the beginning of the series.

The Arakki Defender of the Chair of Law is a remarkable villain, cynically using the benefits of a variety of transactional faith as a means of furthering her own power and then using that power to limit the religious freedom of others. More on that in a minute.

New big bad, Mother Righteous, grows more interesting and cryptic by the page and her specific voice is absolutely perfect for the character Spurrier has created. She’s got a variety of faux-cockney, back alley charm, run-through with a bloody razor’s edge, and I love her unabashedly. And, of course, no one can write Legion like Si Spurrier. David is drawn as an Absalom figure (see what I did there?), transcending his father even as he hangs himself by his hair on the tree of his own insecurities. David gets a moment to shine in this book and no mistake about it.

Other characters aren’t so lucky in their depiction. If you want to read a version of Nightcrawler that is written astonishingly well, smiling as he does in the face of despair, sometimes through tears, meeting destruction with hope, existential and physical terror with faith, picking up his swords and his God when everything seems lost, and generally being the kind of swashbuckling, badass, gentle souled hero the world needs most right now, a light burning in the gathering dark, read A.X.E: Judgement Day #5. If you want to read about someone with no idea who he is, or what he stands for, a man with nothing but a stutter and a handful of questions, Legion of X #5 is the book for you. It’s astonishing how vast the gulf between these two depictions gapes.

A large part of this is due to the way that Spurrier appears to view religion. Religion, for Spurrier, is ultimately a tool — something people create to serve as a reflection of themselves (as the characters Spurrier creates no doubt reflect aspects of himself) or a flail to use to scourge the spines of other people. Yeah, he says in this book people should have the right to believe whatever they want, but ultimately he seems to think that people are making it all up. Therefore, because it’s all made up, it’s ok to erase the Muslim faith of one character or dismantle the Catholicism of another. It’s as though Spurrier’s saying, ‘Believe the lie, if you want, as long as it helps you. Whatever, I guess.’ If that weren’t the case, the Arakki wouldn’t be able to absolutely obliterate gods with the naked eye of cynicism. There would be room in this book for the unexplainable as opposed to the bare utilitarian.

Faith isn’t an act you put on because you are afraid of hell or desirous of heaven. If you’re only ‘good’ because someone’s holding a gun to your head all the time or promising you paradise (to badly paraphrase the great Flannery O’Connor), you ain’t good at all. Not really. This Spark Spurrier’s made reads like a low-budget mixture of The Force and watered-down Buddhism (at least give us the awesome full-fat version with transcendence at the center of it!), and it is certainly functioning as a cult-like religion would if it were invented out of the tatters of a poor understanding of the works of Carl Jung and pure, grade-a cynicism. This is why he can’t seem to write Kurt.

As a writer, you certainly don’t have to share the views of your protagonists to write them well, but you do have to treat those beliefs seriously. When you’re writing Magneto, for example, you have to put your experiences aside for a time and put on his. You have to inhabit an experience that is separate from your own — in Mag’s case: holocaust survivor turned freedom fighter turned world leader. You have to believe, at least temporarily, the things he believes in order to make him feel real. But Spurrier is a man who posts memes on Twitter making fun of people who believe in transubstantiation, both by describing a complex theological belief as ‘Jesus crackers’ and by associating people who share that belief with transphobes, as though it is the belief in the metaphysical transformation itself that makes people transphobic hypocrites rather than homophobia, patriarchy, desire for power and fear of the unknown. Never mind the fact that trans and non-binary Catholics and Anglicans (such as myself) very much exist and comfortably straddle both worlds.

As an aside, I cannot emphasize enough how great it is to see a Marvel writer being vocally trans-inclusive on social media. It’s seriously refreshing, and I deeply appreciate the sentiment. But it’s possible to do it without dismissing those of us who don’t fit into the box you, a straight cis man, have made for us. It’s tantamount to saying, ‘you can’t really be trans or non-binary and also believe this. Not cool, cis guy. Not cool.

Back to the book: Spurrier doesn’t seem to want to understand a perspective that is different from his own (not ‘agree with, but understand: as in know what it’s about), so he, therefore, fails to write it well. I honestly don’t think that Spurrier can suspend his own disbelief long enough to write someone else’s. That’s why the characters which are simpatico to his worldview (those he creates, or those who he had a hand in creating) are so phenomenally well done. And that’s why others, like Kurt, get lost in the shuffle. That’s why Nightcrawler (named for a worm) has so thoroughly lost himself within the pages of this book. I honestly never thought I’d say this, but if my choice is between Spurrier writing Nightcrawler and having him exist as a background character as he was during the first year of Krakoa, I’d take him being true to himself in obscurity over the mess we’re getting now. This book would be perfect if Nightcrawler wasn’t in it.

The art, as always, was close to phenomenal. Jan Bazaldua’s line work is hallucinogenic without ever losing detail. I especially loved his location designs: the altar and the narthex were otherworldly and lovely, patinations of shadow and light. Federico Blee’s color work is entirely appropriate for the art it’s supporting; his use of shading is as nuanced as the writing. I always look forward to seeing his name on a book.

This arc finished as it began: a mixed assortment of blessings and curses held together with wonderful art and a tincture of color. Hopefully, the second arc will hold onto what is good while improving on the areas that need it.

This arc finished as it began: a mixed assortment of blessings and curses, held together with wonderful art and a tincture of color. Hopefully the second arc will hold onto what is good while improving on the areas that need it.

Legion of X #5: A New Covenant