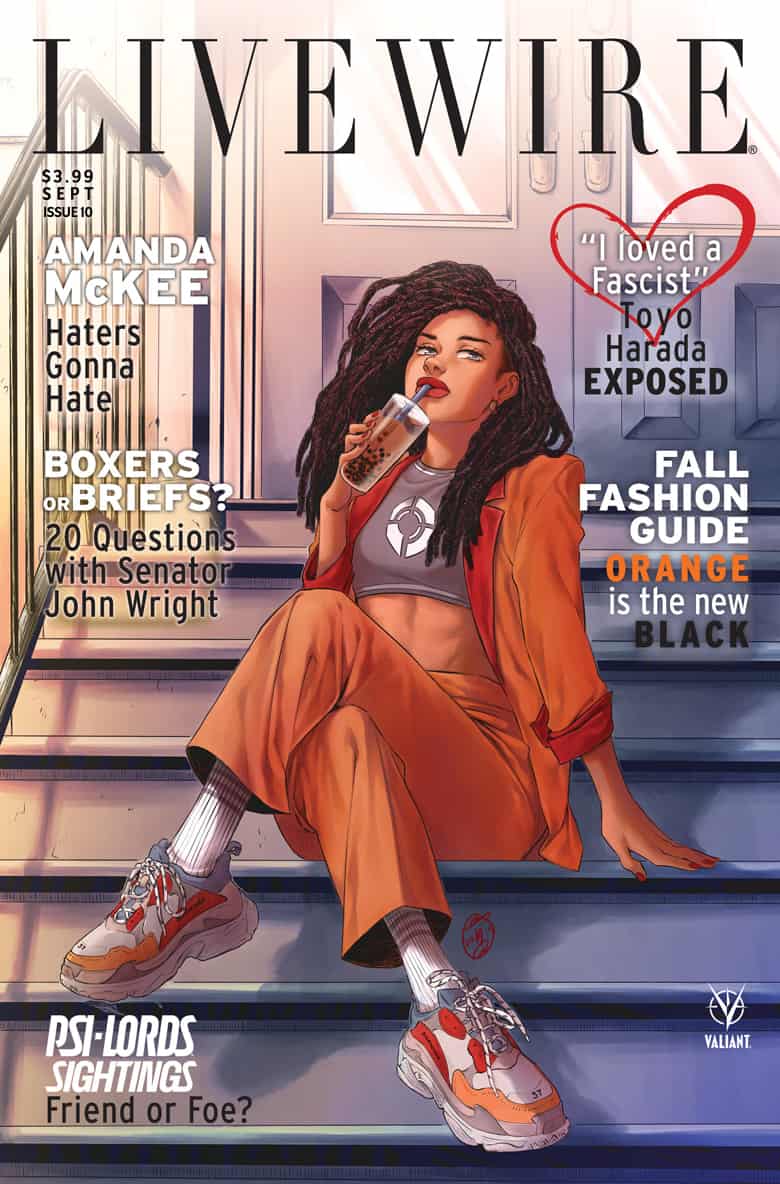 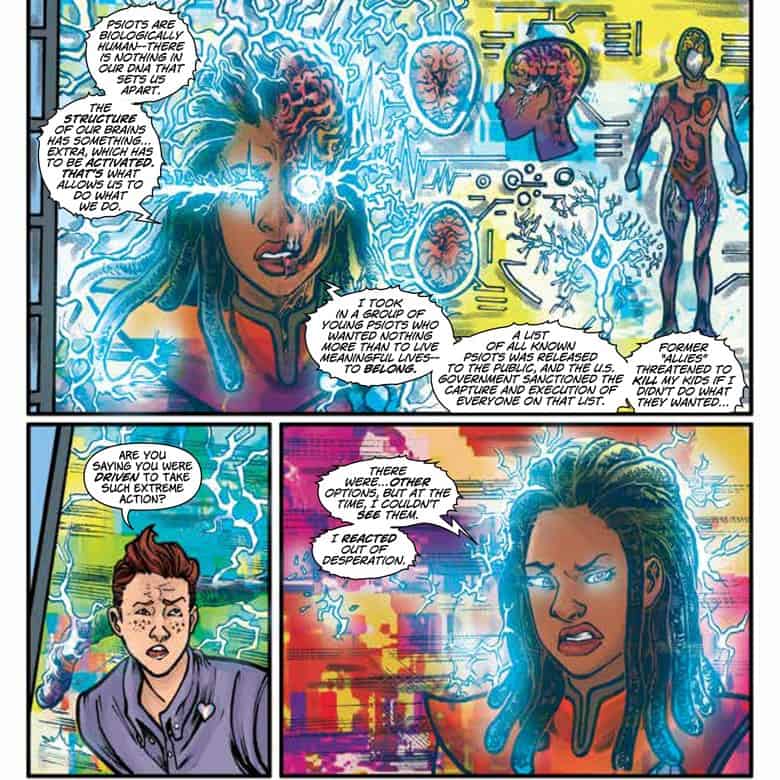 Who said nothing good comes on television anymore? Councilman Wright takes his Pro-Psiot plan to live TV to debate with his rival for Senate election. The crowd is iffy and easily swayed towards mob violence mentality a third player enters the game: Livewire!

Now America is forced to see firsthand why Livewire set down the path that has marked her as the most wanted woman on Earth. But if that will be enough to turn the tide of public opinion is yet to be seen.

While not much action is to be had here, Ayala still delivers a solidly entertaining issue. Using the pundit platform to bring a sense of realism to Valiant universe issues, we get a chance to see what this world is like firsthand. The televised segments read just as one would expect to see an episode of O’Reilly or Larry King or Bill Marr. Although Ayala does make Senator McCoy a bit of a douche (okay a lot of a douche) it’s not done in a ham fisted way that cheapens his character. In fact despite his fear mongering, he voices some reasonable points. Who can stop people like Livewire? Why shouldn’t something more extreme be done beyond conventional incarceration? It creates a slippery slope about rights and freedoms for sure but it also raises a point we’re usually quick to dismiss because ya know superheroes are dope. What happens when normal people are forced to pay for the mistakes of superhumans? Not only that but considering that the U.S. government is heavily responsible for the tragedies of Harbinger Wars 2 just as much if not more so than Livewire, then who is held responsible for that?

Livewire #10 is the easiest read as far as weightiness so far but it still doesn’t fail to raise some very interesting questions about the nature of the average schmuck vs super people. When it comes to something like Psiots that are rare yet each one game changing in a larger world so reactionary, it’s easy to autopilot the concept after the lengthy history of books like X-Men. Livewire on the other hand takes a more grounded approach to the topic which turns up fresh perspectives and arguments. In other titles when something like this happens we get giant robots storming cities and heavily overt reactions to superpowers. This though takes a more sly approach, hearts and minds are levied for, black ops missions are put into play. All the intrigue and action is there without the suspension of disbelief that people would just be alright with uber powered machines demolishing entire chunks of human inhabited areas just to get one guy with gills.

Another short but equally interesting part is Livewire confronting Wright’s campaign manager, Gwen Goodman. We as readers are well aware Goodman and Wright are definitely up to something but the interaction between McKee and Goodman adds a fresh layer onto that. We already know Gwen Goodman is clearly a skilled manipulator and if her humble Bible Belt origins are true (or even if they’re not) this issue makes her that much more interesting as well as potentially dangerous. To aspire for Congress playing the “shadow game” so well for a young girl from Nowhere, Alabama and it actually be an attainable goal in itself shows how capable Goodman actually is. If she can manipulate her way from poverty to political powerhouse in just a couple years working subvertly imagine the kind of enemy she could make once attaining any measure of real power. It’s a small glimpse into the possibility but a great one.

Tana Ford brings her unique style to this book as well, as I mentioned before it was a welcome change not because Kano wasn’t killing it but sometimes change is just a good idea to avoid monotony. While there’s a few rough panels all in all Ford does a great job capturing the feel of the crowd, the fervor of McCoy and the wolf in sheep’s clothing charm of Wright. The digital battle between Livewire and the unusually potent cyber security about Wright’s secrets is definitely an artistic highlight in this issue. Kelly Fitzpatrick def brought her A game for this issue as well, using a wide palette that perfectly fits the tone of each scene.

A cool mix of spy games and gladiator politics, mixes real world issues with superhuman issues and dares you to ask which one is really the problem? A person who can fly or one willing to stomp on liberty to further their own agenda?