Wrapped up in the PR nightmare of trying to soften the image of Psiots to the American public, Livewire finds herself in the belly of the beast: a banquet hob knob rubbing elbows with vapid celebrities and corrupt politicians.

While Amanda tries her best not to lose it on these clowns, Senator Wright deepens his own political agenda. Suffice it to say having a duplicitous "Girl Friday" has it's own set of shifty perks and the ramifications of what Senator Wright is truly up to are about to explode. For her own part Livewire gets to do some "ground level" damage control in more ways than one as the party has some quote unexpected guests, masked terrorists foolish enough to think they've got the drop on our girl.

What you would think would be a nightmare event turns out to be exactly the PR boost Livewire needs for the world to remember her as the hero she truly is rather than the inhuman boogie man she's become seen as. But in a shadow game of double talk and shady practices even the good parts of this whole shindig promise to lead to an auspicious end.

Vita Ayala has done a lot of subtle and not so subtle pop culture commentary with her work on Livewire, this has been a mix of both. Balancing the superficial nature of fame with comedic aspects and a reminder that even the most unappealing celebs are still just people was a great touch here. 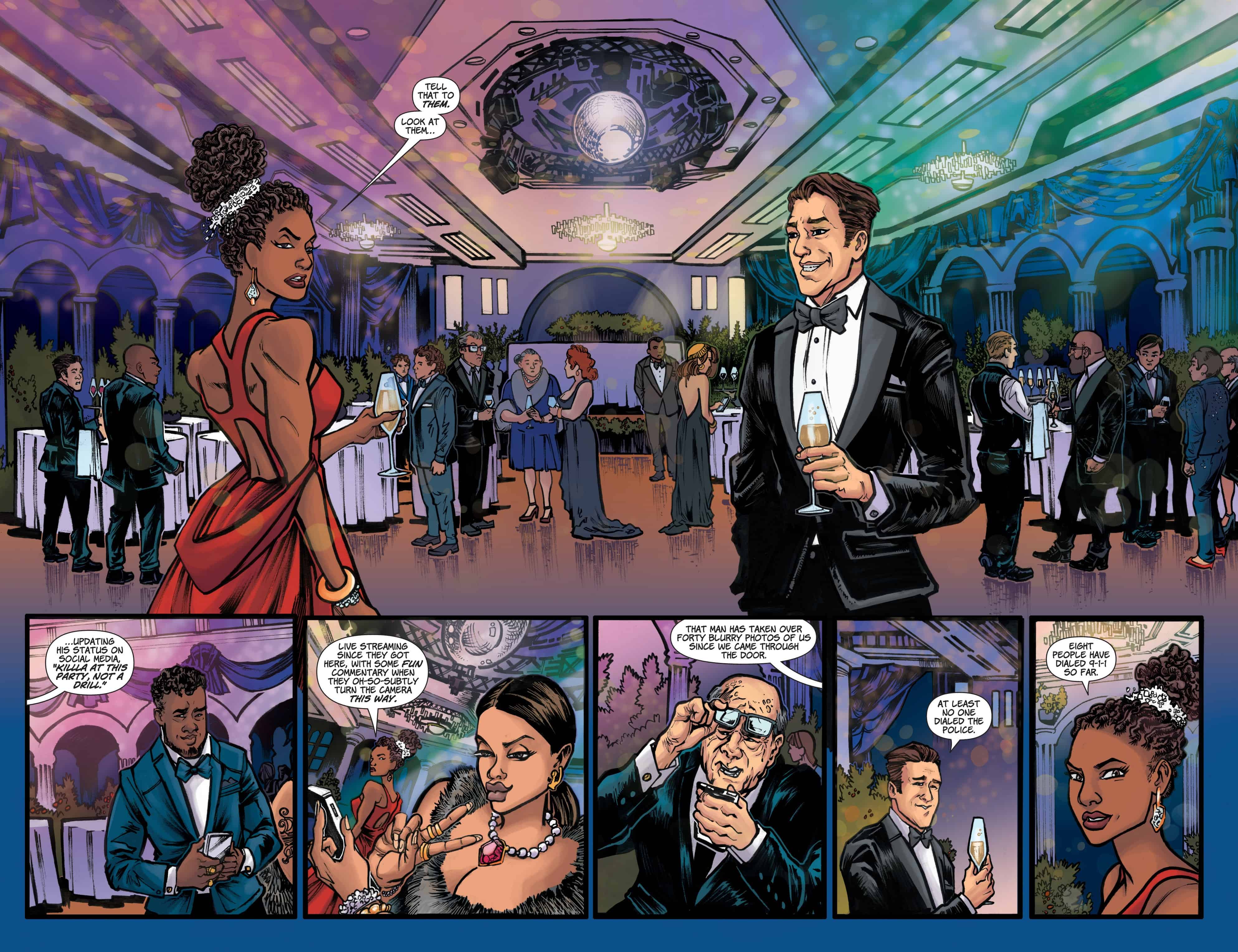 You would think with all Livewire has gone up against as a solo hero, a part of the Unity Squad or Harbinger Foundation, seeing her deal with corrupt fat cats would be underwhelming. But somehow between the popping art of Ford and Fitzpatrick and some poignant writing, this current arc does not disappoint. If anything seeing a hero like Livewire who’s powers and experience put her “above” the mundane works so well when she sets her sights on the threats we all deal with daily, what happens when Big Brother is on your tail and makes no qualms about coming after you in broad daylight?

With each issue we get to see more of why Livewire can stand up among the ranks of iconic heroes like Wonder Woman or Iron Man but also be reminded she’s still “Jenny from the Block”. Yeah she could say “I’ve got the power I don’t need to play nice” but as she puts it in this issue, she’s dedicated her life to fighting for those who can’t fight for themselves. Sometimes that means black OPs death squads or giant Armor Hunters and sometimes that means giving the finger to the government.

Seeing Ayala and co. not be afraid to shy away from tackling real world type issues is not only engaging but refreshing. I’ve made the comparison to Brubaker’s Bucky Cap before with this book and that still stands somewhat in themes but absolutely in overall quality. If Bucky was better at the political game like our girl McKee is though he’d probably still be Cap so there’s that.

The long and short of it is this is a bittersweet issue, while on one hand I'm excited to see how Ayala wraps up an amazing run on Livewire I can't say I'm in a rush for it to be over. This issue does an amazing job setting up what promises to be a fitting grand finale though so if you weren't pumped for #12 going into this one I would check your pulse if you aren't now.