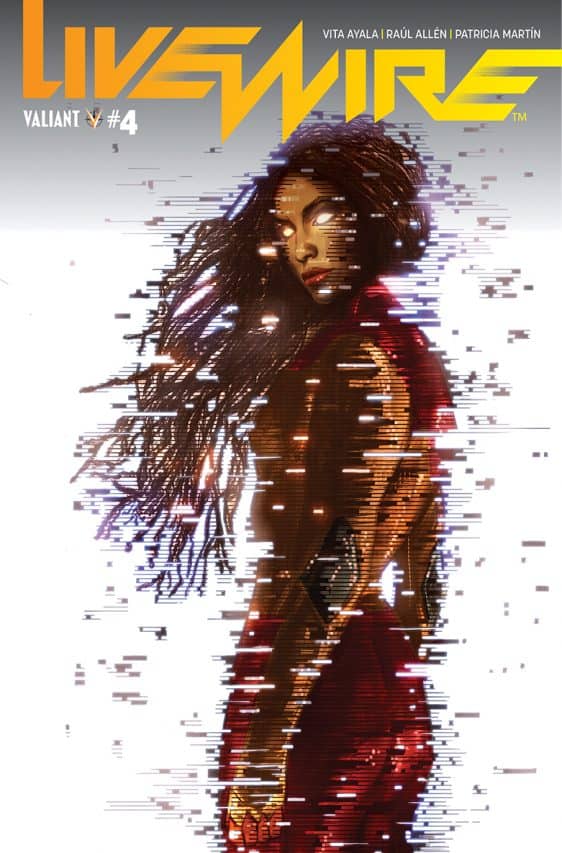 As we last left Amanda McKee aka Livewire, she was powerless and ambushed by an old friend turned enemy and well...not doing so hot. Still wanted for shutting down the power to the entire country, Livewire is wanted worldwide as public enemy #1 despite her best efforts to be a hero to the downtrodden.

Livewire and Pan de Santos finally have it out, at the end of the last issue we saw Pan get the drop on Livewire in a well planned trap while also catching her without her powers. Livewire is up the proverbial creek without a paddle but this issue continues to hammer home what the first arch of her debut series needed: Livewire is a complex character who is more than just flashy powers. While Pan tries to wear an already dogged Amanda down by using his parasitic mental powers to force her to relive her biggest regrets we're treated to some glimpses of her life that in a few small panels add a variety of layers to her as a character for the reader. 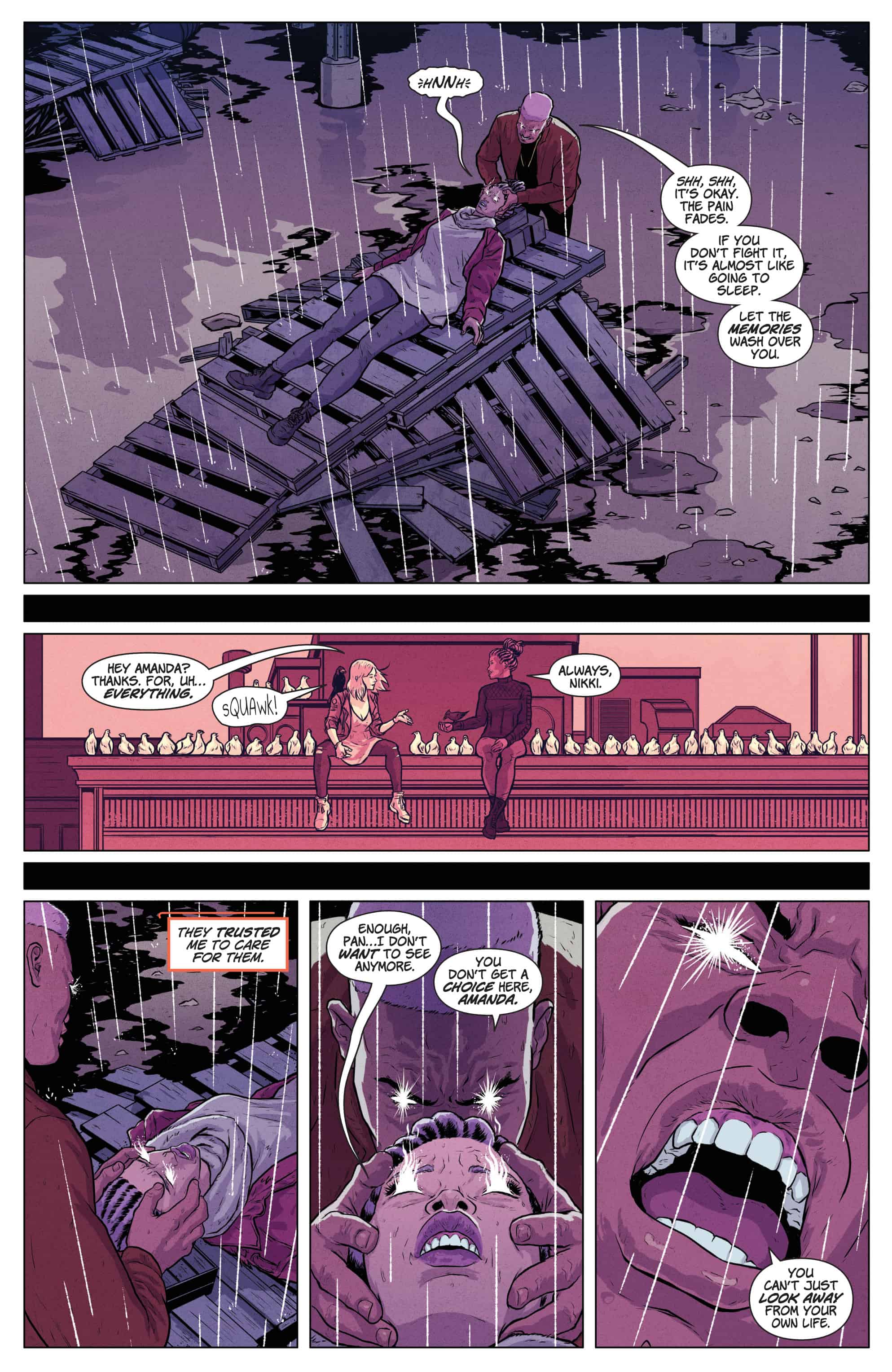 Of course his plan backfires and Livewire uses this to get her powers back but more importantly we get some great dialogue between her and Pan that shows the other side of the coin. How a Psiot from the Harbinger Foundation could have turned out if they weren't made of the right stuff despite having drive and great power. The "final" showdown between Pan and Amanda is fluid and well paced with great exposition to match our hero's development as a character. In just a few short pages we see her go from ambiguous outlaw back to the stalwart hero that oozed confidence and strength like she did from the pages of other amazing books like Unity, in which she was a key player throughout the entire run.

After some soul searching and a crushing defeated handed to Pan de Santos we see Livewire once again step back into the role she was made for: a guiding light for the other Psiot heroes of the Valiant universe. The seeds planted in the closing pages of this issue promise to make for some gripping stories to come.

Vita Ayala took on a risky task here, being the first to tackle Livewire’s solo debut. While the character does have a following from her other appearances in Harbingers and Unity, she’s usually highlighted for her role as a capable leader but seemed to work best in a team setting. Vita though has taken what worked from the past and turned up the dial on why Livewire is an amazing character and why she should intrigue readers. I compared this book to when Ed Brubaker had the “audacity” to replace Steve Rogers with Bucky Barnes as Captain America, allow me to elaborate on that. 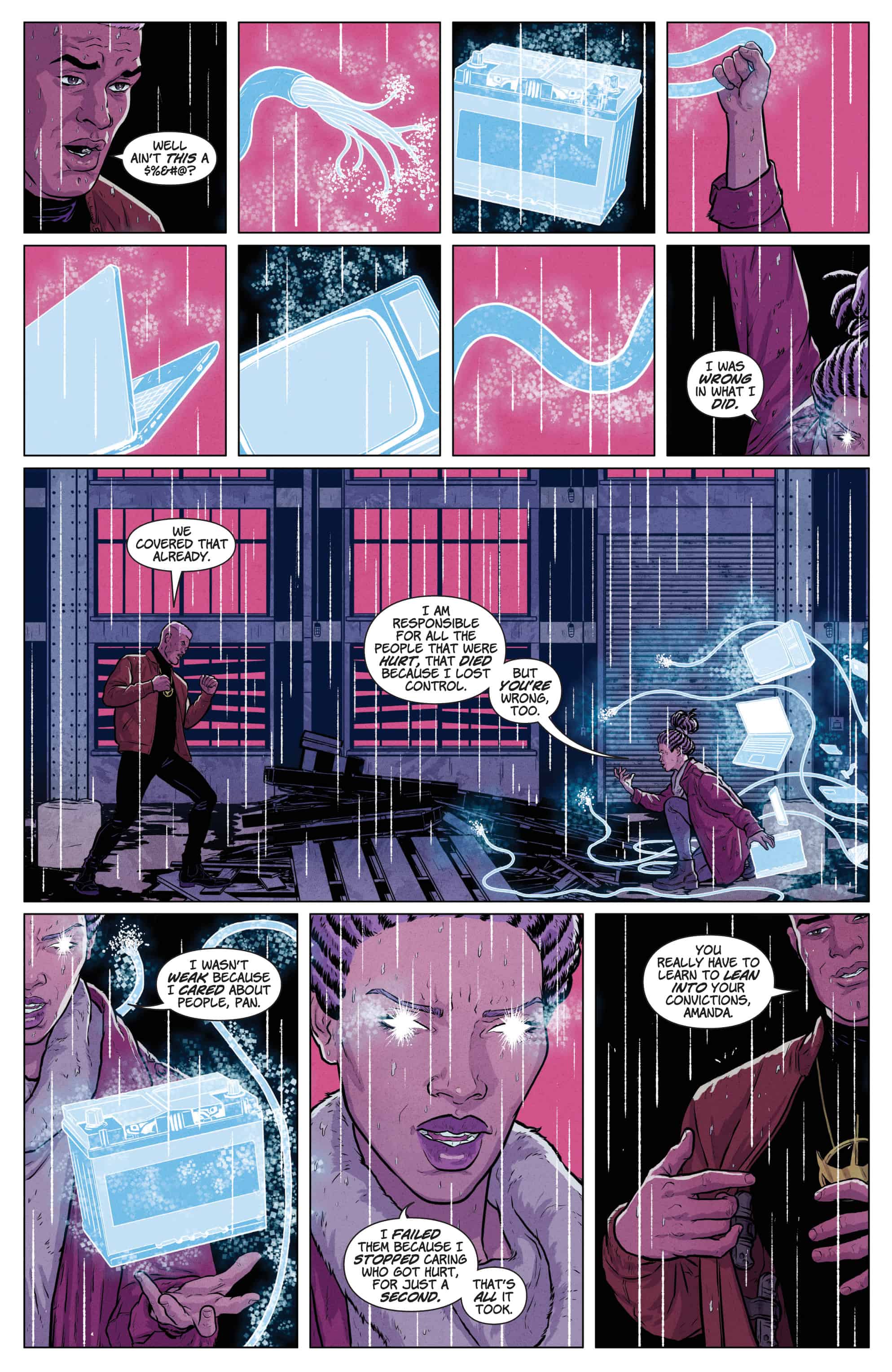 Not does she nail the balance between X-men-esque superheroics and dope spy/black ops type action but Vita Ayala also knows how to work in character development without dragging down the action, being overly hamfisted and just generally makes you wanna cheer for the character even when they aren’t on their A-game. To be blunt, the events of Harbinger 2….while interesting were not well received and arguably for good reason. The idea that Livewire, the “sensible one” among Valiant’s superhero set would do something as extreme as blackout a continent just to flex on “human oppressors”, was a little ridiculous to say the least even by comic book standards. But from the ashes of a controversial move (similar to the Death of Captain America story no one actually bought as being the death of Steve Rogers) Vita Ayala has transformed that glaring error in judgement into something that makes Livewire more enduring as a hero and endearing to the reader as someone you can relate to despite her fantastic abilities (Similar to Bucky becoming a believable Captain America despite the Winter Soldier being a bit of a macguffinish unstoppable killer and not much else at the time).

If one needed a solid foundation to step foot into the Valiant universe, Vita Ayala just handed you four issues perfect for just that. Something intriguing without being overwhelming and familiar to older fans like myself without becoming stale. Besides when's the last time we got handed a strong independent black woman who didn't need no man in her own book that wasn't Storm? Bottom line Livewire is a solid series that already shows great promise and the potential to become just as synonymous with the name "Valiant" as Ninjak, Bloodshot or X-O Manowar.