Lois Lane #4 (of 12): I Need a Cold Shower and Some Horse Tranquilizers Now 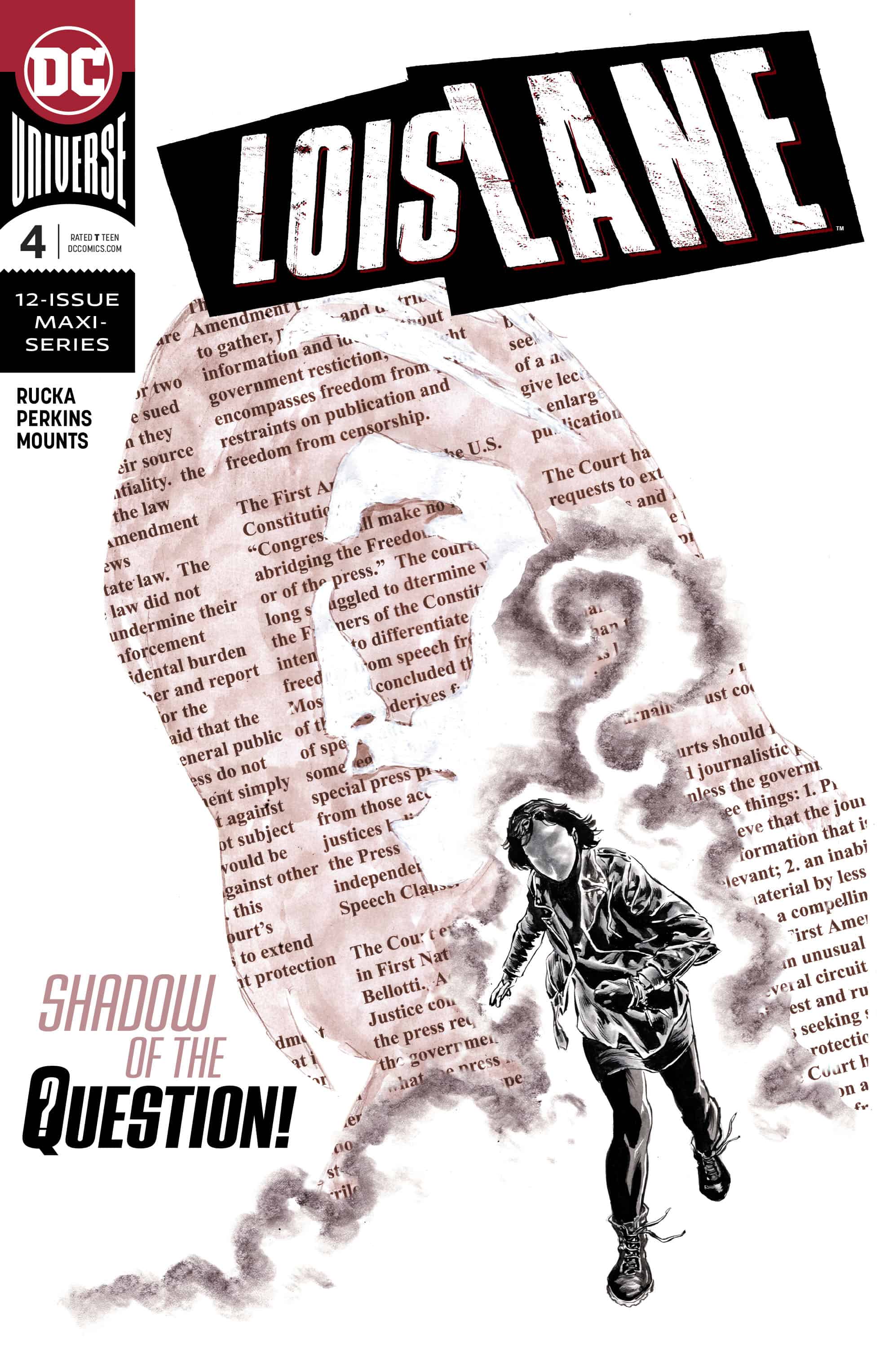 As the intrigue and danger continue to mount, ace reporter Lois Lane, clad in only her finest come-hither undergarments, takes a moment of time for a warm shower with her husband, but then finds someone else in there instead!

IT'S HER SON. SHE FINDS HER SON. Look, lots of other important and relevant things happen, including the two Questions having a sit-down to discuss matters of life and death and resurrection, but really, we need to get a handle on this incredibly Oedipal situation going on first, okay?

I’m a pretty liberal guy. I’m also a fan of screwball comedies and ’80s college teen sex romp comedies. But there is absolutely nothing about the above scene that doesn’t completely skeeve me out. It would be one thing if Lois flung the shower open, saw Jon instead of Clark and HA HA HA EVERYONE IS EMBARRASSED and that was the end of the scene, but the fact that he robes her and they hug it out while she’s still wearing her %&&@-me panties and was just trying to bang his dad is just really, really weird. Rucka laughs it off with an awkward “I thought you were your dad!/TMI, Mom!” exchange on the next page, but there’s no walking away from the fact that this scene is just desperately uncomfortable.

To a degree, it speaks to Rucka as a writer, I think, that he could wring this much of a gut-level reaction out of me. But on another, more realistic level, this scene passed out of his brain, onto a script, and past multiple levels of editorial, and no one else thought it was icky at all and should go forth to the masses for consumption. Guaranteed: “the scene where Lois accidentally almost shower-banged her son” will become a meme on par with the infamous Chuck Austin “Angel and Husk are bumping uglies in front of Husk’s mom” scene from his time on Uncanny X-Men.

Fortunately, the rest of the issue is really, really solid. After The Unspeakable Awkwardness That We Shall Never Speak of Again, the focus shifts more to Renee Montoya and Charlie, two Questions with a lot of history between them (thanks to Rucka and 52!) and far few too many answers. Charlie was dead, and Renee became his protege as the Question… so, how is he alive? Why is he alive? And what does it mean for both of them going forward? I absolutely love that this has become a subplot in this book, because a) I’m a huge Renee Montoya Question fan, but perhaps more importantly, b) it’s an acknowledgement that pre-New 52 continuity is continuing to seep back into the current conversation as part of DC’s storied history.

And on the whole, bizarre scene cut from a straight-to-DVD American Pie sequel aside, Lois Lane continues to be one of the smartest, most adult comics DC is publishing today. It’s a slow-burning, well thought-out political thriller, and a biting commentary on today’s current attitudes toward journalists (which our Mr. Rucka has a few thoughts on). Alongside artist Mike Perkins, he’s crafting the perfect antidote to spandex fatigue. If you’re looking for a smart, fantastically paced, moody comic, this one’s for you. Get on board now and see what all the hype is about!

…Just don’t get too caught up in one scene’s awkwardness, anyway, and you’ll do fine.

Lois Lane continues its winning streak, despite having a brush with horrifying Oedipal awkwardness this issue. This is a comic for adults that isn't afraid to be what it is and say what it has to say.

Lois Lane #4 (of 12): I Need a Cold Shower and Some Horse Tranquilizers Now