Love Everlasting #1: Across Time and Story 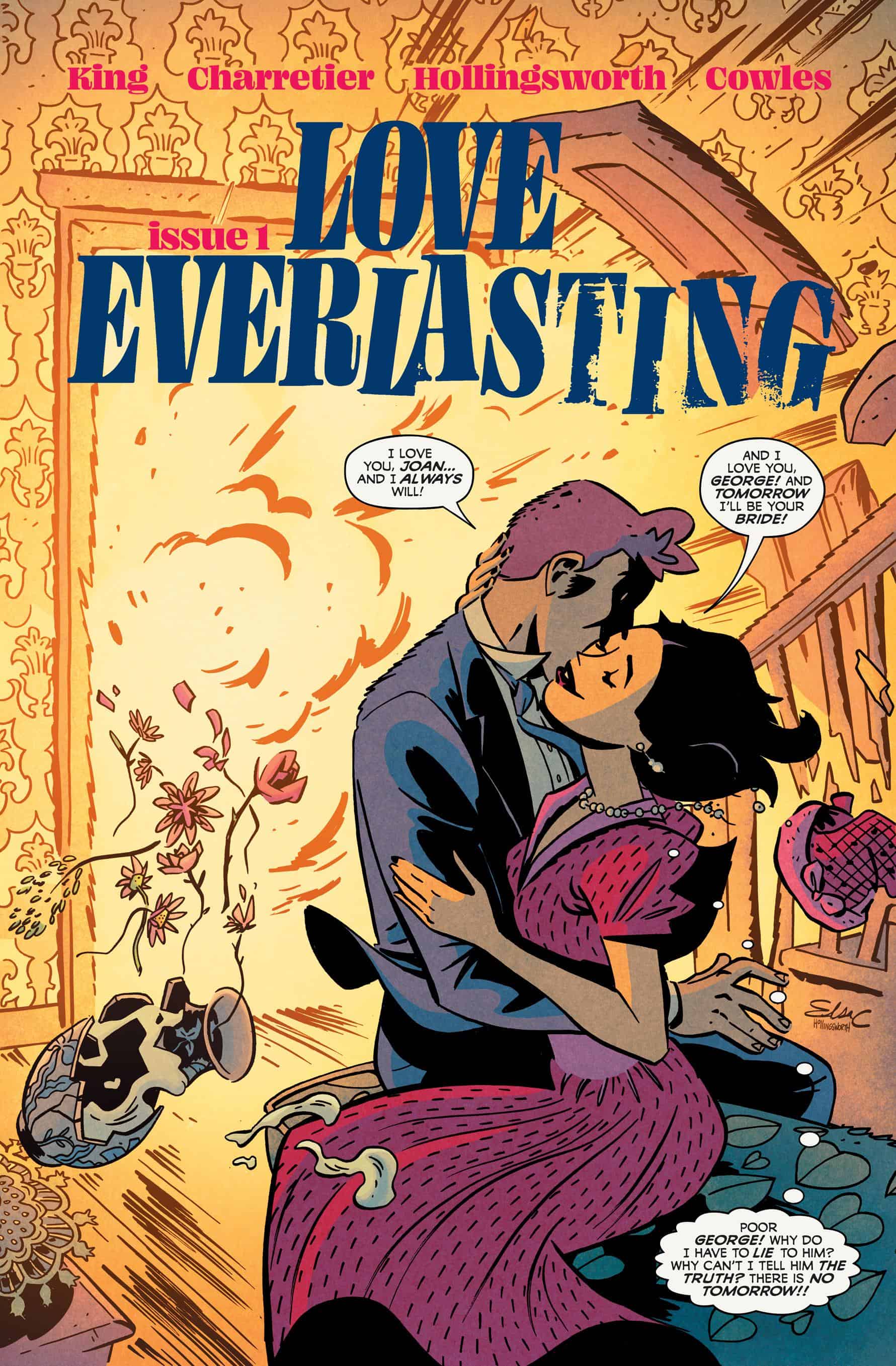 Joan Peterson discovers that she is trapped in an endless, terrifying cycle of “romance”—a problem to be solved, a man to marry—and every time she falls in love she’s torn from her world and thrust into another teary saga. Her bloody journey to freedom and revelation starts in this breathtaking, groundbreaking FIRST ISSUE.

From superstar award-winning creators TOM KING and ELSA CHARRETIER, comes a new ONGOING SERIES in the tradition of SANDMAN and SAGA.

One of the most interesting facets of comics working arising from Substack is to see how creators approach the release of material. Thanks to the digital nature of the platform, and regularly scheduled intervals of time, creators are no longer bound to the traditional 22-page monthly issue. Much like webcomics and the vertical scrolling comic paradigm shifts before, Substack has introduced a new wrinkle into the ways the story is communicated sequentially.

So, when Elsa Charretier and Tom King announced Love Everlasting, it was slightly surprising that the comic would be released in that traditional format. Based on the general premise, which is described as “romance comics’ Sandman” the series seemingly lends itself to a smaller, more vignette structured release. But after reading the first issue, I’m thankful it was released in the traditional sense, as it gives the book a unique pace that would have been more difficult in another structure.

Love Everlasting #1 – written by King, with art from Charretier, colors by Matt Hollingsworth, and letters from Clayton Cowles – harkens back to the era of romance comics, the predominant genre in the medium for a large portion of its history. The issue opens as protagonist Joan Peterson recounts the woe of being in love with her best friend’s boyfriend, George, who also happens to be Joan’s boss.

The beats of the story are pretty self-explanatory, with Joan moving to the big city, falling in love with a man she can’t have, kissing said man in a moment of passion, and eventually getting together with him. Where the issue takes its first of many turns is after the two embrace again, everything shifts, and a woman who looks like Joan, and shares the same name, is suddenly in a passionate kiss with another man, in another time. The original sequence had a ‘40s aesthetic and setting to it, while the shift reflects a freewheeling ‘60s/’70s atmosphere.

The issue continues in its embrace of the tropes of the era, and the story is Joan falling for a man her father doesn’t approve of – a beatnik Bob Dylan-esque folk singer who seems her equal match, intellectually – before conceding when it revealed the man is also the son of a stuffed shirt who works with Joan’s father. Joan and the man, Kit, embrace after the misunderstanding is sorted out, and the issue shifts again.

Here, the pattern establishes itself before breaking, and the issue switches to the old west, where yet another Joan is thrown into a perilously love story, this time the classic love triangle on the ranch. Instead of smooching either man, who resembles George and Kit respectively, Joan flees into the desert where she meets a mysterious man before a shocking twist that propels Joan once again into another time and place.

King’s script does an excellent job in how it handles the various dialects and diction that comes with working in four different periods, each one reflecting the present while maintaining an excellent continuity between Joan specifically. Much of that is thanks to a running narration that sometimes encompasses entire panels on its own, giving the story a prose sensibility to it that lends to the genre and time-spanning nature of the issue.

The extremely wordy script, paired with a dialogue cover and four interlocking title pages gives the issue a vignette style structure that feels in line with the mini-series King has done for DC, but in this script, it feels more pronounced thanks to the change in aesthetic and decade. That paired with the foundation of romance tropes does an excellent job grounding the script into something familiar before running with the concept in the back half of the script, and gives an excellent rhythm to the issue.

Charretier’s art matches that rhythm, shifting perfectly from era to era, always carrying with it a romanticized and stylized touch. Her rendering does its best to accentuate that something is wrong across the pages of the issue, and even though the backgrounds, designs, and atmosphere are all spot-on, something is lurking under the surface that feeds into that too-perfect quality. It’s the same attention to detail that gives a Kubrick movie its eeriness, in that the images are too perfect or symmetrical in their composition. For Charrerier’s art, it’s the simplistic style and verisimilitude toward romance comics that gives the issue an uncanniness.

While Charretier’s style lends itself to these various genres, her pencil work feels timeless even in a very specific era – sharing that distinct pleasure with the late Darwyn Cooke’s art – and does an amazing job of the character beats as well. Her expression work is breathtaking, every emotion coming across clear when it needs to while giving a nuisance to a situation neither Joan nor the audience understands just yet. Those expressions paired with the very formal panel composition take what’s best from romance comics, refine them and then offer something new thanks to the genre twist of the script.

Hollingworth’s colors do a great job giving the art an echoing effect, palettes and important hues recurring from decade to decade, associating with certain characters or designs. His coloring also perfectly matches Charretier’s style, adding to the throwback sensibilities of the issue, feeling very simplistic at first glance but giving a level of detail and care upon further inspection. Just as Joan changes and adapts to the world around her when hopping decades, the book’s colors do as well, trading more muted colors in the old west for the vibrant brights of the swinging ‘60s. In an issue of excellent colors, that middle portion may be the best, as the time allows for Hollingsworth to explore an expanded palette and play up the hues thanks to musical performances and eye-catching costuming from Charretier.

The unifying force of the issue falls to Cowles’s lettering, working to join the various design elements and stylistic choices, while still revealing the baseline of Joan’s character and awareness of the situation. The choice to keep the font and balloons the same across genres is another indicator that something is awry with the issue, and the consistent use of the caption box to intercut panels creates the frame of the story. Without that consistency, the issue wouldn’t have the hint of something amiss and would feel like four disjointed stories of a young woman experiencing romances across time. But by serving as the connective tissue, the lettering ensures that the issue maintains its consistent yet foreboding rhythm as the romances unravel into something much more tangled.

Love Everlasting #1 is a breathtaking read from cover to cover, bringing out the best in each member of the creative team to create a story that spans time, space, and genre. There’s something in the alchemy of each creator's style and voice that perfectly meld to deliver this intriguing deconstruction of the romance genre while matching multiple design aesthetics and utilizing simple techniques for masterful execution.

This is a book that feels like it’s going to quickly escape the orbit of the romance genre and move into something more sinister and cosmic, whether that be in a philosophical, literal, or technical way is yet to be seen. Fans of works that transcend genre and twist their form will love this issue, and with an issue this strong, it's hard not to sign up for the Everlasting Productions newsletter for more of the story immediately.

Love Everlasting #1: Across Time and Story