Love Everlasting #2: She’ll Be Back 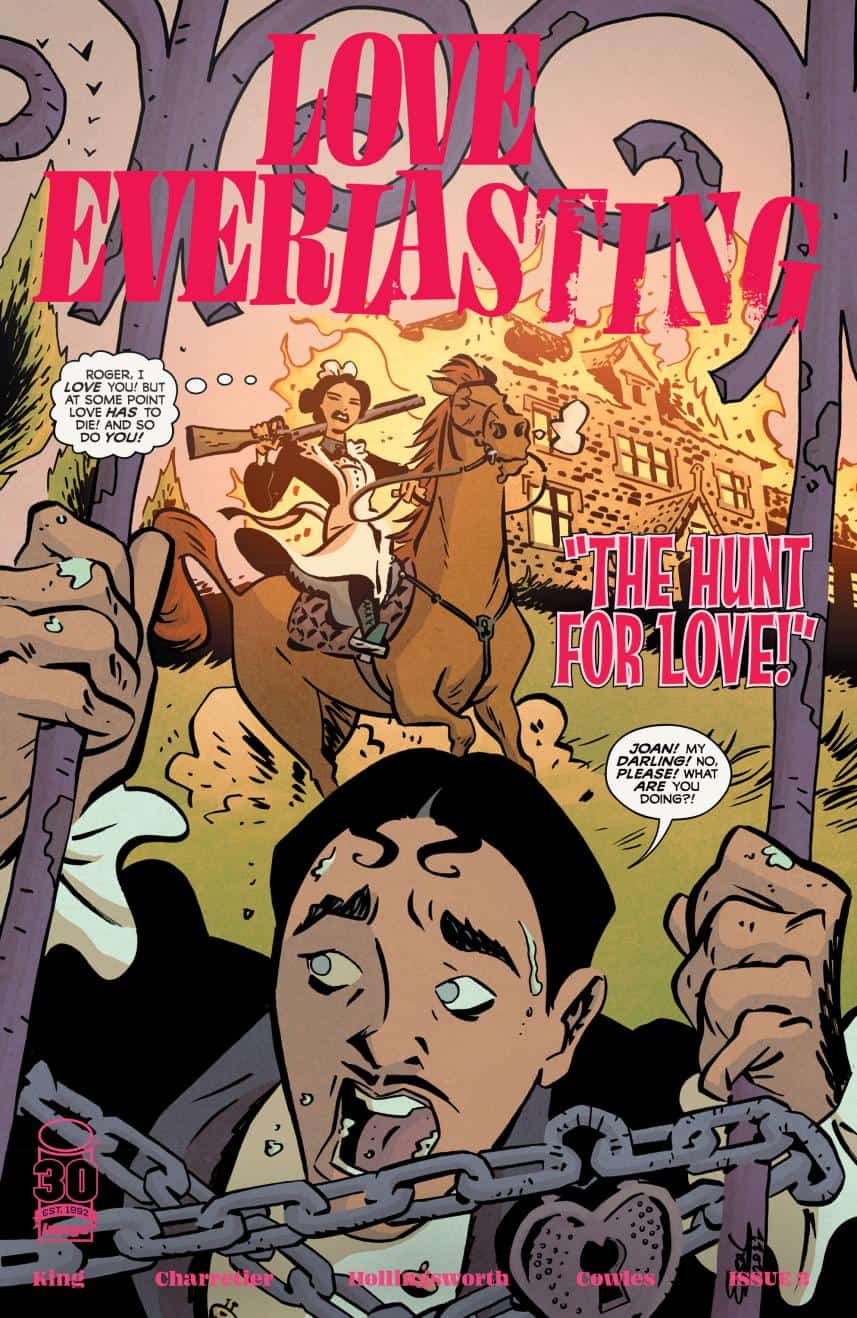 “THE HUNT FOR LOVE” Joan wakes into another nightmare of love. 1920. She’s the maid and Roger’s the heir to the manor, and though it is forbidden, they are inevitably drawn together. But soon clichés begin to crumble and blood begins to spill as Joan fights back.

It’s hard to pin down why romance as a genre has faded from the larger pop culture zeitgeist. It might be the proliferation of other genres, which seem to move in trends or cycles the same way fashion or music does. Or it might be a result of popular stories focusing on the big and bombastic. Plots where the world is ending, Hollywood’s current golden goose, the multiverse, and acts of massive collateral damage and spectacle are a core experience of art, more apparent than ever in comic books.

The big two publishers are choked with universe-spanning crossovers that threaten the inevitable “nothing will ever be the same again” or reboot the entirety of existence. In those ecosystems of scale, the smaller stories of people having meet cutes, falling in love across social standings, and struggling in the little moments of life have a harder time rooting in. It’s always refreshing when one of those stories of romance creeps its way in, grounding drama and intrigue in character and relations. A book like Love Everlasting weaves in and out of those two categories, delivering a book centered on the notions of romance while hinting at a larger story of action and spectacle.

Love Everlasting #2 – written by Tom King, with art by Elsa Charretier, colors from Matt Hollingsworth, and lettering by Clayton Cowles – opens with the story of Joan, a young maid born on the same day as the future lord of the abbey, Roger. Sharing that birthday allows Joan a chance to spend time and befriend Roger before being left to her life of service in the home. Like any good romance, the two fall in love across social standing, which inevitably forces Roger out of the home to protect his family’s reputation.

Roger returns for Joan, but as the two flee to their secluded hunting cabin – the place for their romantic rendezvous – the plot takes a familiar twist. The man in western garb from the first issue appears, aiming to kill Joan once again. It becomes clear that Joan is aware of the man’s intent, letting Roger get shot to ensure her survival, wielding a shotgun from the cabin to try and kill the man pursuing her. Joan fails and is shot, but Roger can fire at the man, seemingly killing him. Joan and Roger lay out bleeding before the issue ends.

King’s script does a fantastic job initializing the apparent loop that Joan is stuck in, making believe that the issue will once again focus on a woman trapped in a doomed romance. After the first issue, which jumps through time and space, King’s focus on one time and place grounds Joan’s character and shows the experience she has living through each of these lives bound to romance.

The romance structure of this script also gives the book’s pacing a tight narrative flow, letting King embed those genre flourishes thanks to the shorthand that the romance conveys. The first half of the courting and breezy relationship between the two is fun, but the issue comes alive when the twist occurs. It’s like going from Downton Abbey to Terminator, and the injection of action propels the script into the more dynamic territory.

The action also gives Charretier a chance to branch out from dramatic embraces and melodramatic expressions. When Joan picks up the shotgun in the cabin, the issue’s art sings as Joan fires shot after shot. There was a bit of this action in the last issue’s western chapter, but Joan and the art feel more energetic behind the action, both in the narrative and on the page. There’s a sequence towards the middle of the issue where Joan sneaks out with Roger to practice shooting, and Joan seems more alive in this moment than any others. The way Charretier renders Joan’s smirk at hitting the target, eyes almost sparkling with mirth, is a triumph of linework.

That sense of life comes back towards the end of the issue when the man comes to kill Joan. Throughout the issue, Charretier has given plenty of focus to Joan’s expressions as she’s maintained the abbey and had her dalliances with Roger, but those never appear as detailed or charged as the moments of action. Charretier gives Joan a desperate and calculating expression as she fires shot after shot, sweat running down her forehead.

There’s a panel in the action that is bisected by an axis made by Joan aiming her shotgun, beading sweat on her forehead, and it’s unlike anything else in the issue. It’s an infusion of detail that proves that just because Joan draws using a hyper-stylized technique, that doesn’t mean detail is lost. Those details become more vital in key moments and allow the art to convey the fear, focus, and tension all at once.

The action sequences pack such a powerful punch thanks to Charretier’s use of detail, but Cowles’s lettering matches the energy and heightens it. Every gunshot and attack feels different, signifying a difference between Joan’s shotgun and the man’s six guns through varying SFX. While the shotgun is an overwhelming, black BLAM onomatopoeia, done in a sharper, angled font, the man’s gunshots are speedier blocks of SFX. The delineation not only makes the action clearer on the page but also gives a signifier to the characters taking those actions. For Joan, this is a matter of life and death, and it seems she’s giving her all to survive, while the man is more mechanic, completing a task.

Love Everlasting #2 has the pressure of following up a near-perfect first issue, while also maintaining the momentum of romance turned mystery, and does so with flying colors. This issue takes the time to slow down, revealing more about what Joan experiences each time she’s thrown into a new life and romance. It also acclimates the audience to how she’s adapting to the cycle. The balance of taboo romance and action is excellent in both the script and layouts, with Charretier, Hollingsworth, and Cowles all exceeding expectations in their work on the page. It’s not too late to pick this issue and the first up if you missed them, and issue #2 promises there’s so much beyond tales of romance in store for the series. (Though the romance is an excellent element of this book.)

Love Everlasting #2: She’ll Be Back