Low Moon: Everything Is Absurd 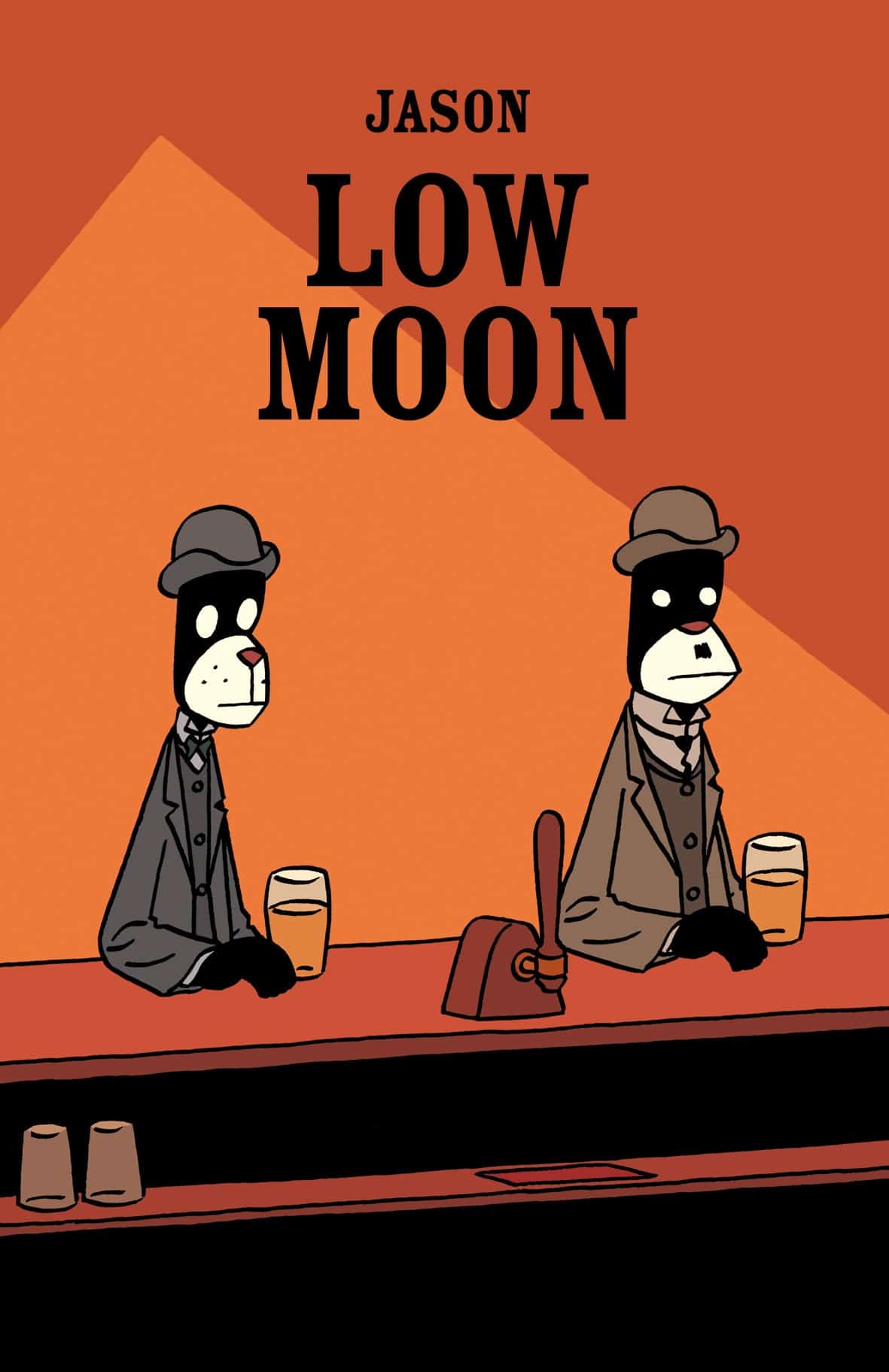 Appreciators of Low Moon likely hold one of two beliefs: 1) a steadfast belief that everything is absurd, and absurdity is mockable, or 2) a casual belief that Low Moon is an exaggeration.

This review empathizes with the first and dismisses the second.

Google Low Moon, and you will find several mentions of the deep sadness that radiates from the novel’s pages. Anthony Farruggia of the Chicago Examiner called it “melancholic, deadpan humor,” and author Glen David Gold described it as “achingly melancholy,” a phrase so cacophonic it might induce the very feeling it describes. But these descriptions, while true, are incomplete: Low Moon is more than a collection of mildly amusing vignettes of profound emotional pain.

Low Moon is an absurdist cautionary tale. The warning: trying is overrated.

As far as understated comedy-drama goes, Low Moon is more Albert Camus than Woody Allen. At times, Low Moon’s narrative tiptoes the line between nihilism and absurdism—several deaths that occur in the novel are both pointless and poignant—and this makes the collective voice of Low Moon’s stories sound like a defeated Yoda: “There is no try.” Meaning, in this case, that trying to succeed is foolish because randomness undercuts success. Every time.

None of the characters achieve their goals—not really—and those who avoid death or isolation still sacrifice greatly. On a spectrum of social commentaries on hopelessness, Low Moon sits somewhere between Of Mice and Men and Death of a Salesman. Between Of Mice and Men’s stubborn stagnation—”never a God damn one of ‘em ever gets it”—and Death of a Salesman’s inevitable deterioration—”life is a casting off.” We either remain where we are because ambition is futile, or we assume that any genuine achievement will eventually give way to reputational decay. With either worldview, trying—the act of attempting to create a positive outcome—is comical. Almost slapstick. Vaudevillian. Thus Low Moon is like Buster Keaton if Buster Keaton were anthropomorphic and risqué. 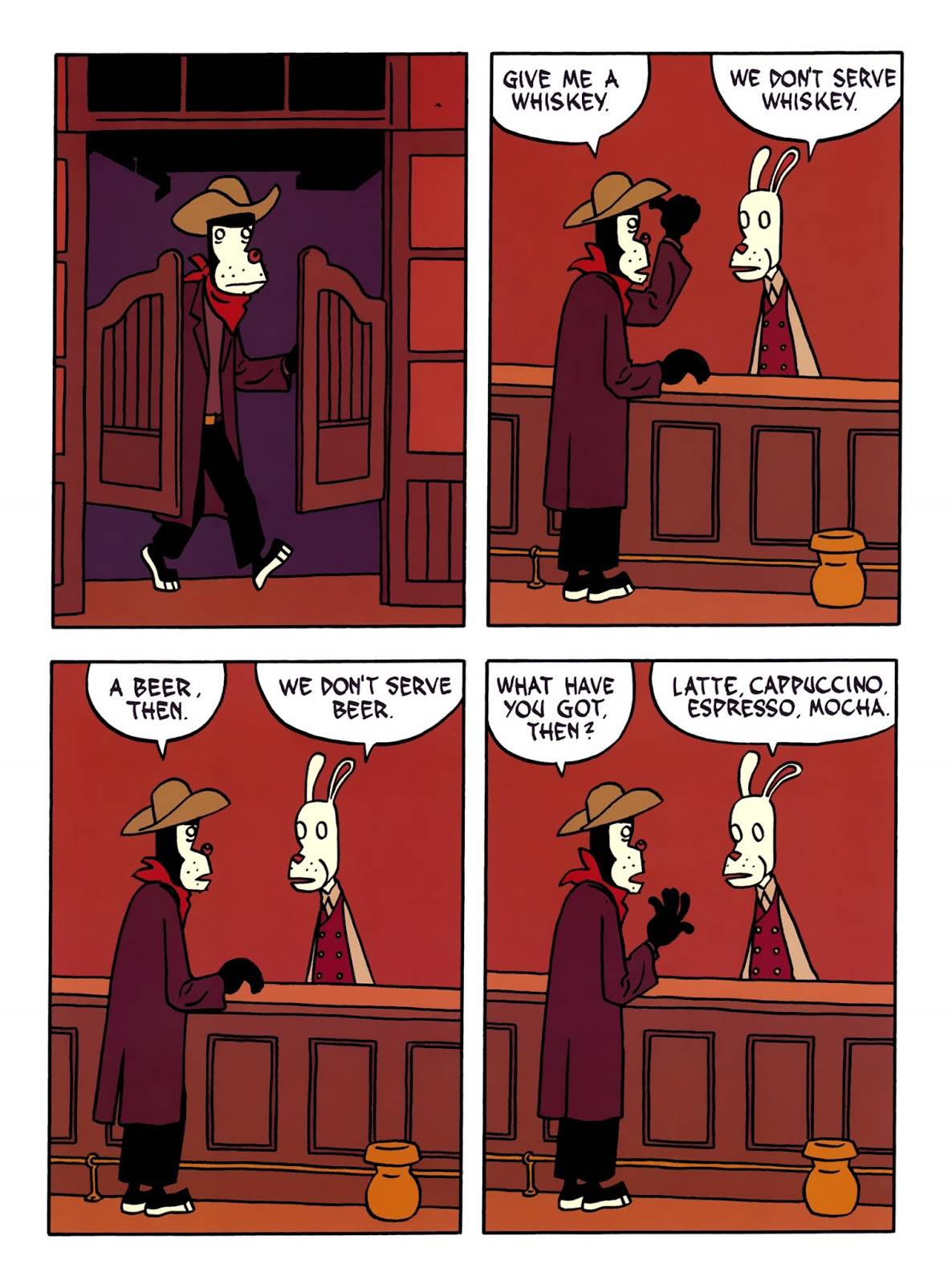 Consider “You Are Here,” the last story in Low Moon. In most of Low Moon’s stories, Jason (the author) seems to argue that only some conversations matter (and even those conversations only matter to the extent that they dress up the actions in the scenes like ornaments on a Christmas tree). But in “You Are Here,” this point is more direct: some of the speech bubbles are literally filled in with black, eliminating words altogether. In the story’s opening pages, a couple of characters are having an argument so trite that the words literally do not matter. Or maybe Jason is asserting that all arguments are senseless. Either way, the value of communication is tested. It is as if Low Moon’s earlier stories are meant prepare readers for the last story’s conclusion: if nothing matters, words don’t matter either.

As stated earlier, some will read this novel with a timid belief that novels like Low Moon do not reflect the real world’s absurdity—they simply exaggerate it. But Jason does not seem to give us that option. Though the situations are far-fetched (with aliens and murder and legacy-defining chess matches), the characters are believable. Their motivations are unnervingly relatable. While reading Low Moon, I felt, at times, like I was holding up a mirror, and it was not a comforting experience.

Absurdist fiction is an eclectic genre—Waiting for Godot, Catch-22, Rick and Morty—and many absurdist stories operate as cautionary tales just as Low Moon does. Some even read like how-to guides on living in a random world. But even absurdist literature can offer some sort of hope. Or, if not hope, then a strange type of comfort. And for that reason, I encourage everyone to read Low Moon. In one of Low Moon’s panels, a schoolteacher says, “You know, there are two kinds of people: those that look forward and those that look backward. I look forward. You look backward.” And maybe looking forward is all we can do. The future may be unpredictable and often disappointing, but at least it will be different. And that’s something.

Read Low Moon. But remember: nothing matters, everything dies, and relationships are entirely unpredictable. Enjoy the rest of your week!

Low Moon: Everything Is Absurd