After a three-day journey searching for a suitable resting place for Sycorax, time is up for Lucifer as he is forced to say goodbye to Sycorax and their son, Caliban. With Sycorax ready to move on to whatever afterlife faces her and Caliban dying, Lucifer makes a grave decision and wages war on Heaven and faces an army of angels.

Lucifer #13 works as a satisfying climax and conclusion to the current story arc: a journey of a father, mother, and son. It is appropriate that a story containing this unholy trinity would come to an end with Lucifer flinging the head of an angel at an army of angels. The standoff between Lucifer and the angels was the highlight of this issue. He stands calm, cool, and collected facing the army. 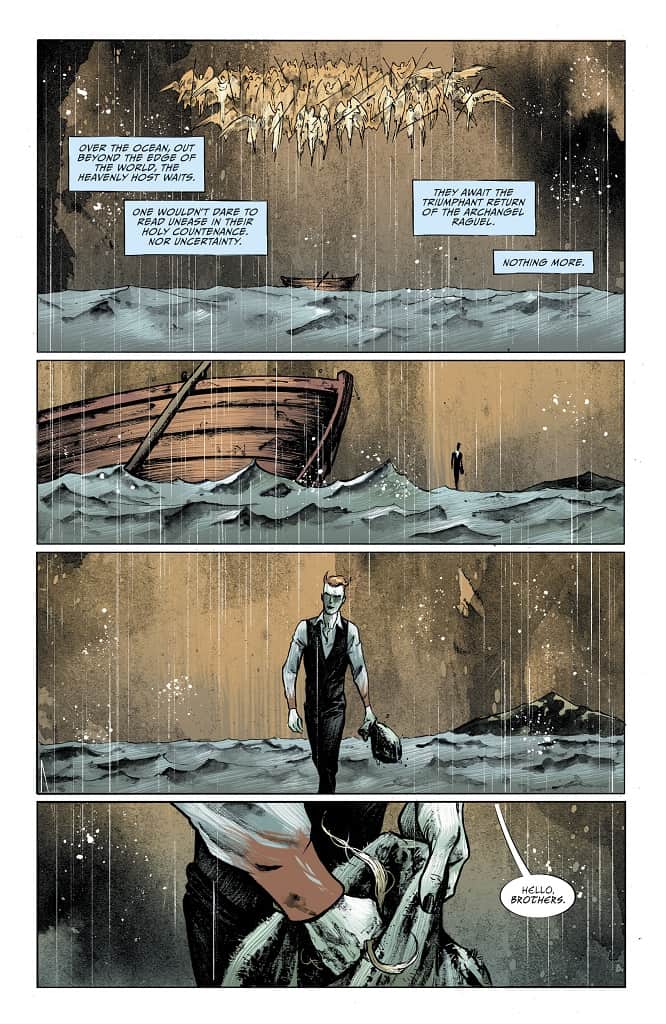 At first I felt Lucifer’s journey through various afterlives was for nothing, but the reveal of the different gods and their realms standing ready for a war against heaven completely paid off. All of the moving pieces finally align. I was weary of Lucifer’s confidence but his plan is so foolproof that even heaven backs down. This leaves Lucifer with the upper hand. He demands two favors from heaven: let Sycorax continue living in this world and make Caliban an angel. God will grant one.

Lucifer chooses his son but Caliban refuses, saying that he will not be angel because they are like his father. A dying Caliban says,“They cannot … change. They are frozen … fossilized things. Their beauty is … porcelain.” As he dies, Lucifer whispers comforts and secrets of the universe to him, and secrets of what came before the universe. Lucifer’s empathy shows that maybe he isn’t like his siblings. He can change. Lucifer threatened a war on heaven for his son and his son’s mother, but both Sycorax and Caliban chose their own paths.

Art and colors by Sebastian Fiumara and Dave McCaig have always been a standout in the series. Dan Watters and Fiumara completely capture the essence and look of Neil Gaiman’s Lucifer. In other incarnations, Lucifer’s David Bowie resemblance can be somewhat distracting but feels perfectly balanced in this series. Fiumara’s Lucifer is inspired by Thin White Duke era Bowie: effortlessly cool. Fiumara’s art is elevated by McCaig’s colors. The two are a match made in hell with pages that feel like scorched cathedral ceilings.

Lucifer #13 felt extremely satisfying to me. The buildup to this issue completely paid off despite not being much action. Lucifer and Caliban's character development especially standout to me, most notably Lucifer whispering to his son as he passes away. I am really interested to see where issue #14 takes Lucifer after all of this. I am absolutely loving Lucifer and suggest readers pick up a copy.