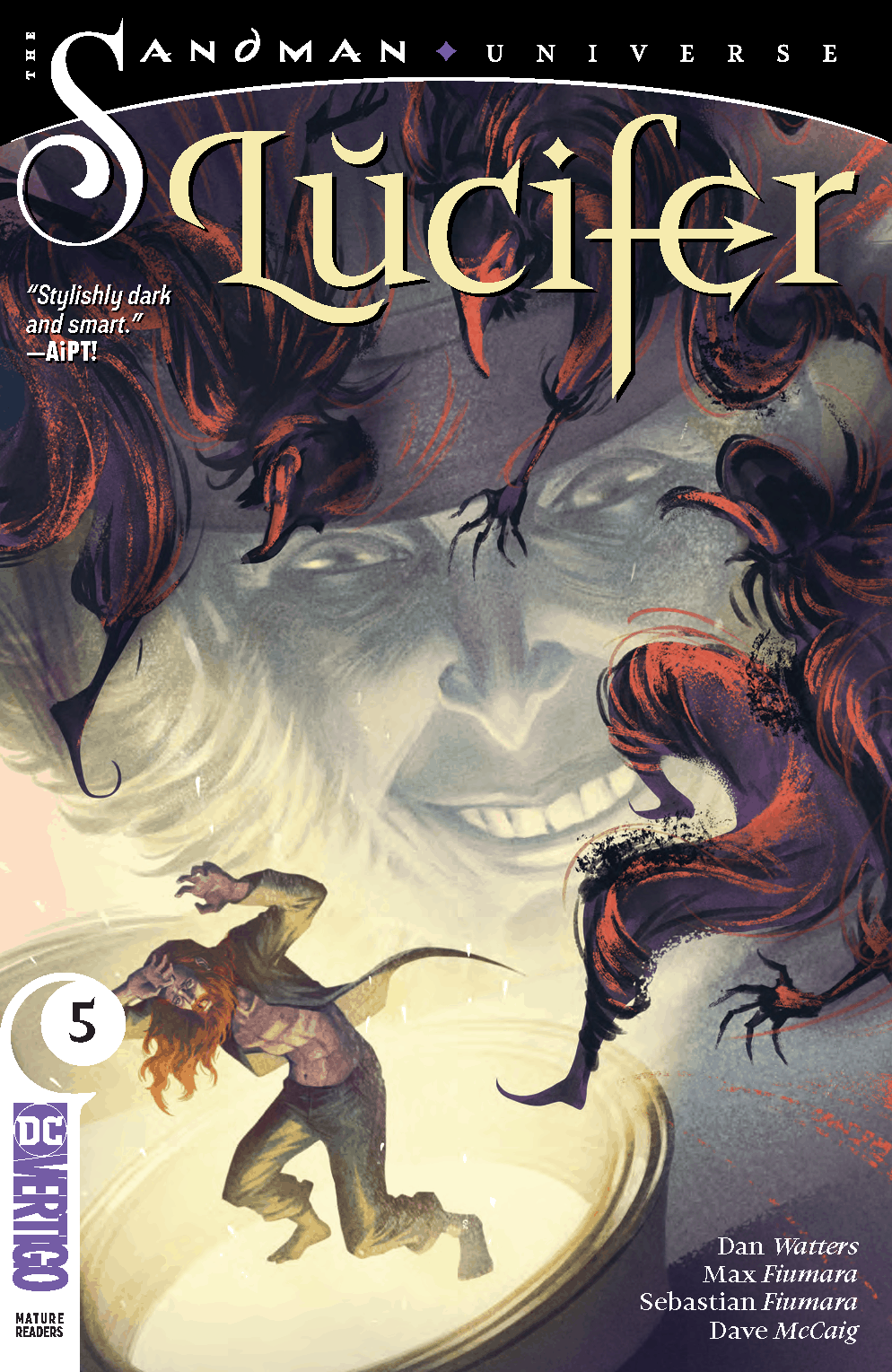 This issues focuses on Jack and his relationship to Lucifer. Plans are laid bare and pitfalls are revealed. This tale of then shows Lucifer in a familiar light, in control, allowing others to trick their way into torment. In the now he’s caught literally in a hell of his own making, unable to escape or even to be aware of what has befallen him. We learn more about what is pressing on John Decker’s brain and its relation to Lucifer’s situation. Sycorax makes her move and the story drops a few more Shakespearian references. The issue ends with torches and mobs on the move, ready to bring it all to a head next issue!

This issue moved the main story along for both Lucifer and Decker quite nicely while also spending quite a bit of time on Jack and his backstory. As a tale of Stingy jack it was well-told. (For those that don’t know (perhaps **minor spoilers**), the tale of Stingy jack is a hallowe’en legend and the tale of the origin of the jack-o-lantern). This book has done a wonderful job of pulling from sources such as folklore, Shakespeare, history, and biblical references, tying them all together into a story that focuses on Lucifer and his many representations.  Each new installment brings in another tale of the devil’s mischief all feeding into Lucifer’s imprisonment.

Lucifer himself takes mostly a back seat in the issue, in some parts a plaything in other parts a puppeteer, but still on the periphery for most of the story while still being the center around which the story revolves. Since he is the motivation for everyone but not featured heavily himself there is little development beyond reaffirming who he was before his confinement. John Decker’s tale seems to be coming to a close, he’s finally reached his goal. Whether he has another part to play or if it will even be enough to save him remains to be seen.

The art continues to be an asset to the book, with a fluid style conveying a sense of movement without sacrificing gravitas. The use of color and shadow accentuate the hellishness of many scenes. Overall everything reads and looks like a fairy tale, but not a nice happy children’s tale — a real fairy tale that’s meant to thrill and scare the hell out of you and teach you not to mess with the devil. It’s hard to tell right now who the bigger devil is, but I’m still going to put my money on Lucifer in the end.

This book continues to be a satisfying read. If you love old tales and hidden references, or If you just like tales of poetic justice and betrayal with just a hint of masochism, it’s a series right up your alley.