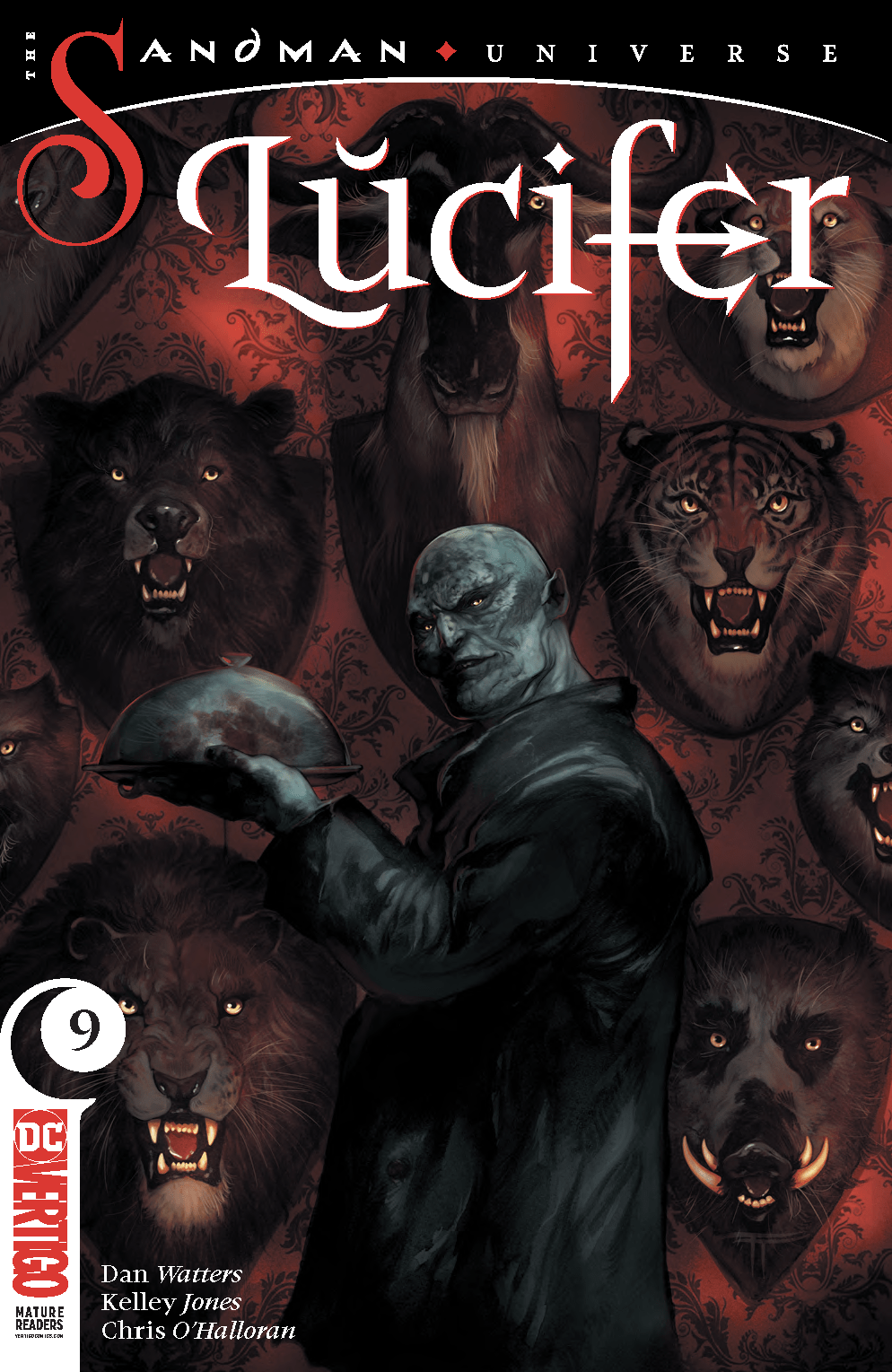 Sycorax turns her back on her son and throws caution to the wind as she prepares for the ultimate witches Sabbath, Mazikeen is betrayed by a shovel wielding demon and witch, and Caliban has finally joined his father in the decaying ruins of the Egyptian afterlife. Disappointed, father and son prepare to continue the search for a place where Sycorax’s soul can rest as her impending doom fast approaches. In the meantime, we take a detour into Caliban’s past to uncover some of the lengths a son will go to in his pursuit of self-discovery and his father’s attention. This gothic tale teams Caliban with a big game hunter as they track the truth about Lucifer’s son. The quarry is pursued with gusto and at the end of the trail just desserts are shared by all.

This story deviates from the main story-arc to an earlier incident in the life of the Devil’s son, where we are treated to a full course banquet of Caliban-style gothic horror well-seasoned with pride and tragedy. As we ruminate over each bite our understanding of Lucifer’s son is transformed. Whether this tale contains vital clues to Caliban’s future story or whether it is merely an entertaining expostulation about his past, only time will tell. 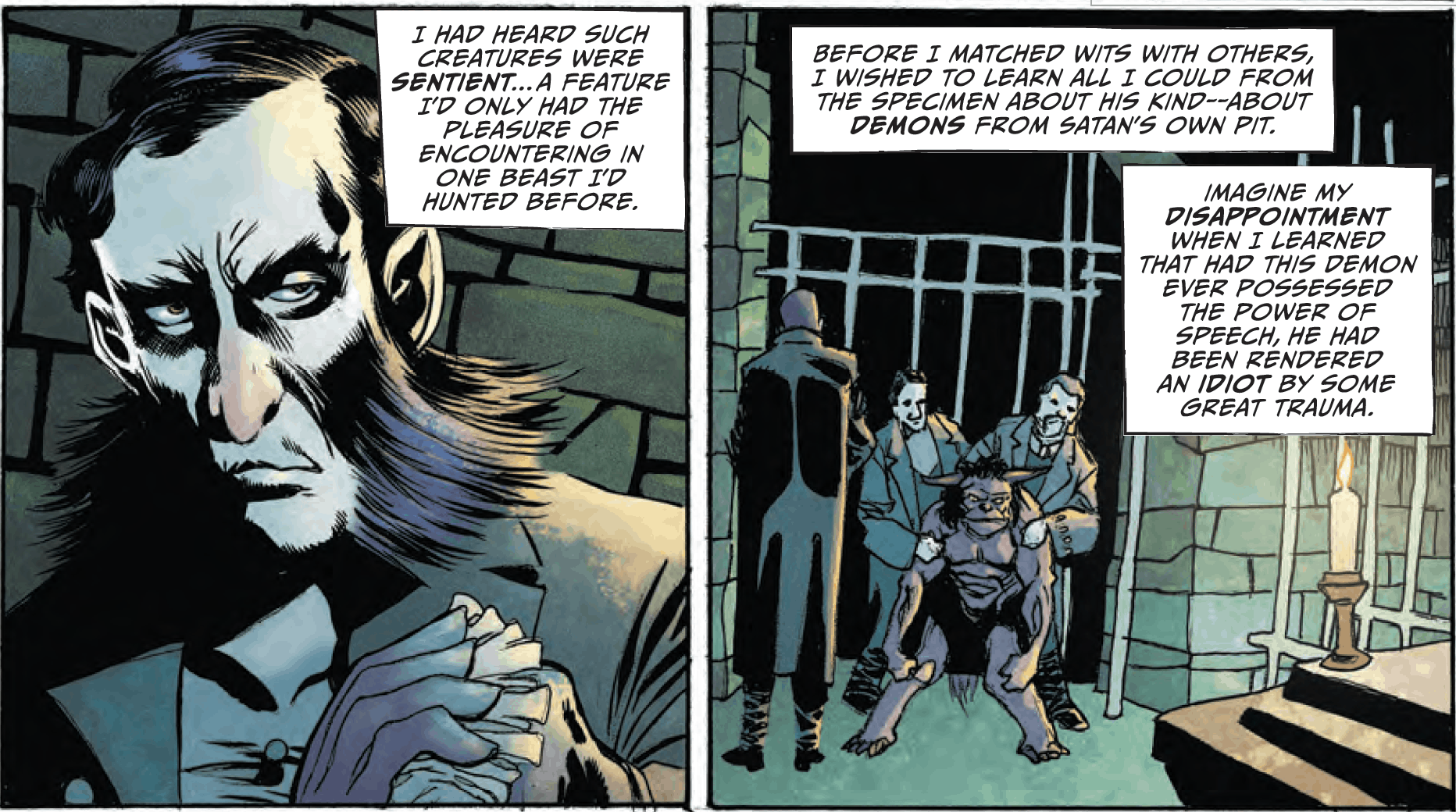 Enter Lord Fowler, game hunter extraordinaire. Bored chasing mere beasts, he has turned his sights on sentient prey. Fowler has obtained a captive, but defunct demon in order to learn the secrets of Hell and its denizens so that he might better hunt them. Caliban is certain he can extract the information, and offers himself as prey should he fail, despite the inability of the creature to do more than feebly croak its master’s name. 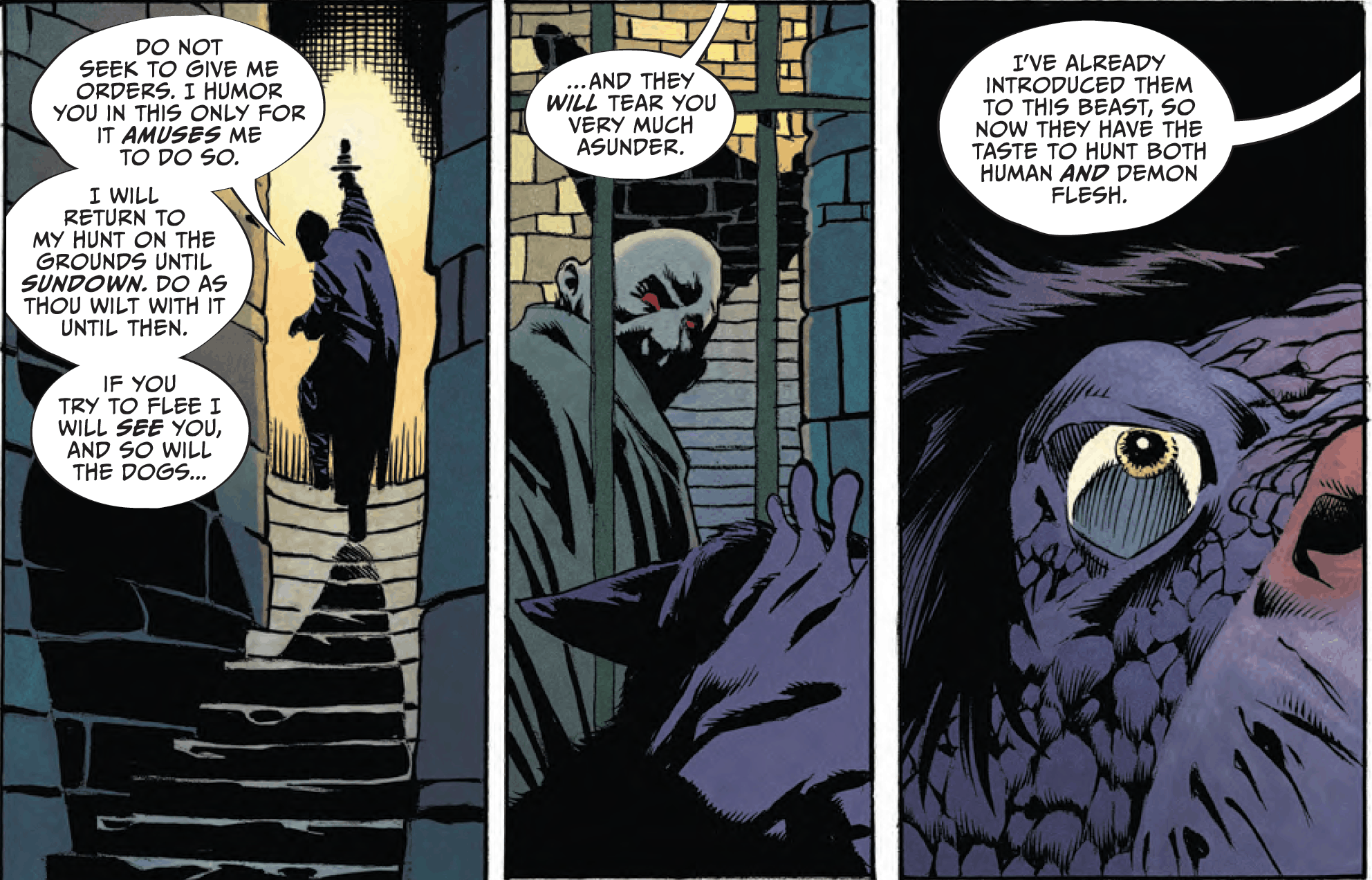 Caliban invites Fowler to dine with him on a meal he has created from the demon’s flesh, following Fowler’s adage that “no morsel of flesh goes to waste”. Fowler’s pride will not allow him to refuse the gruesome meal, despite having to be cajoled to continue several times as the evening wears on. 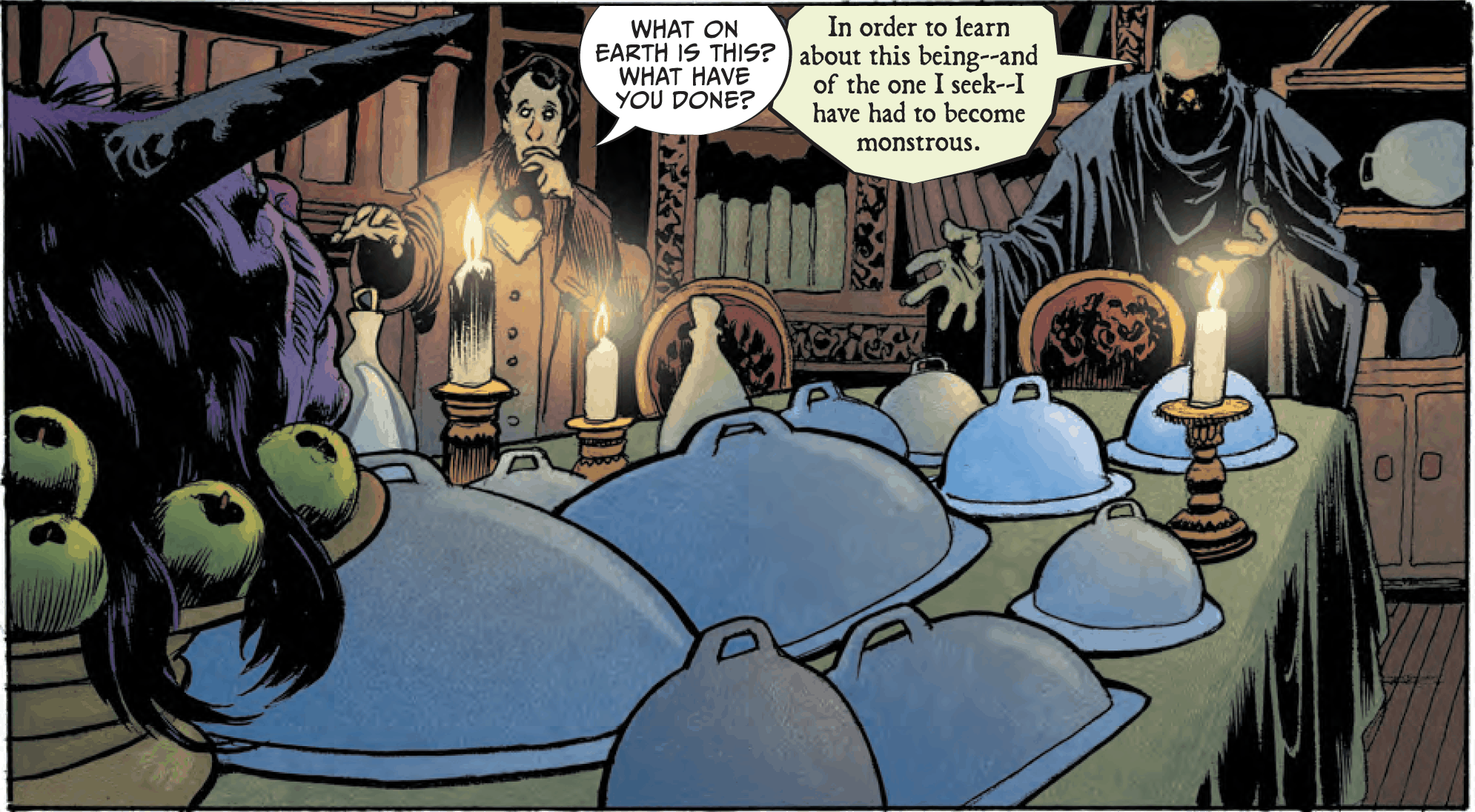 The defunct demon’s tale plays out with each course as we follow his frantic flight from Hell, and fear of Lucifer’s retribution. It begins with him accidentally chipping the Devil’s throne and ends with him succumbing to the demons of his own mind and fear of his phantom pursuer. Upon finding the chipped throne, Lucifer has a short tantrum but soon succumbs to malaise, remarking that nothing really changes in Hell. This may or may not mark the beginning of the boredom which eventually causes Lucifer to abdicate his throne. 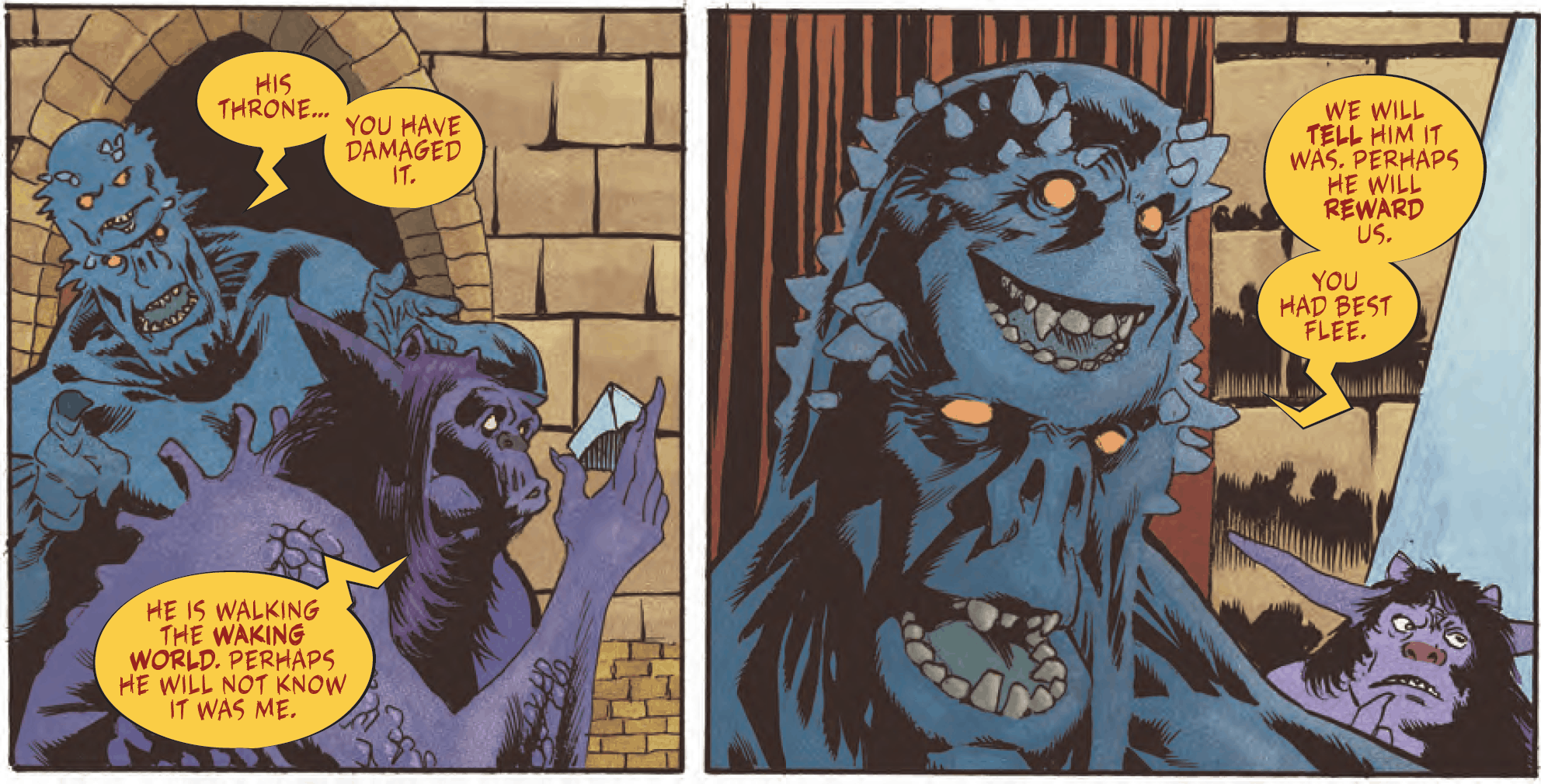 Caliban is also transformed by the experience. At first ecstatic with the information he is gaining, he is soon laid low after discovering a splinter of the ubiquitous suicide tree. The splinter reminds him of his many failed attempts to enter Hell via suicide and informs him that should he ever succeed, would become one of their numbers. However, by the end of the meal Caliban is back to his hopeful self, ready to continue the pursuit. 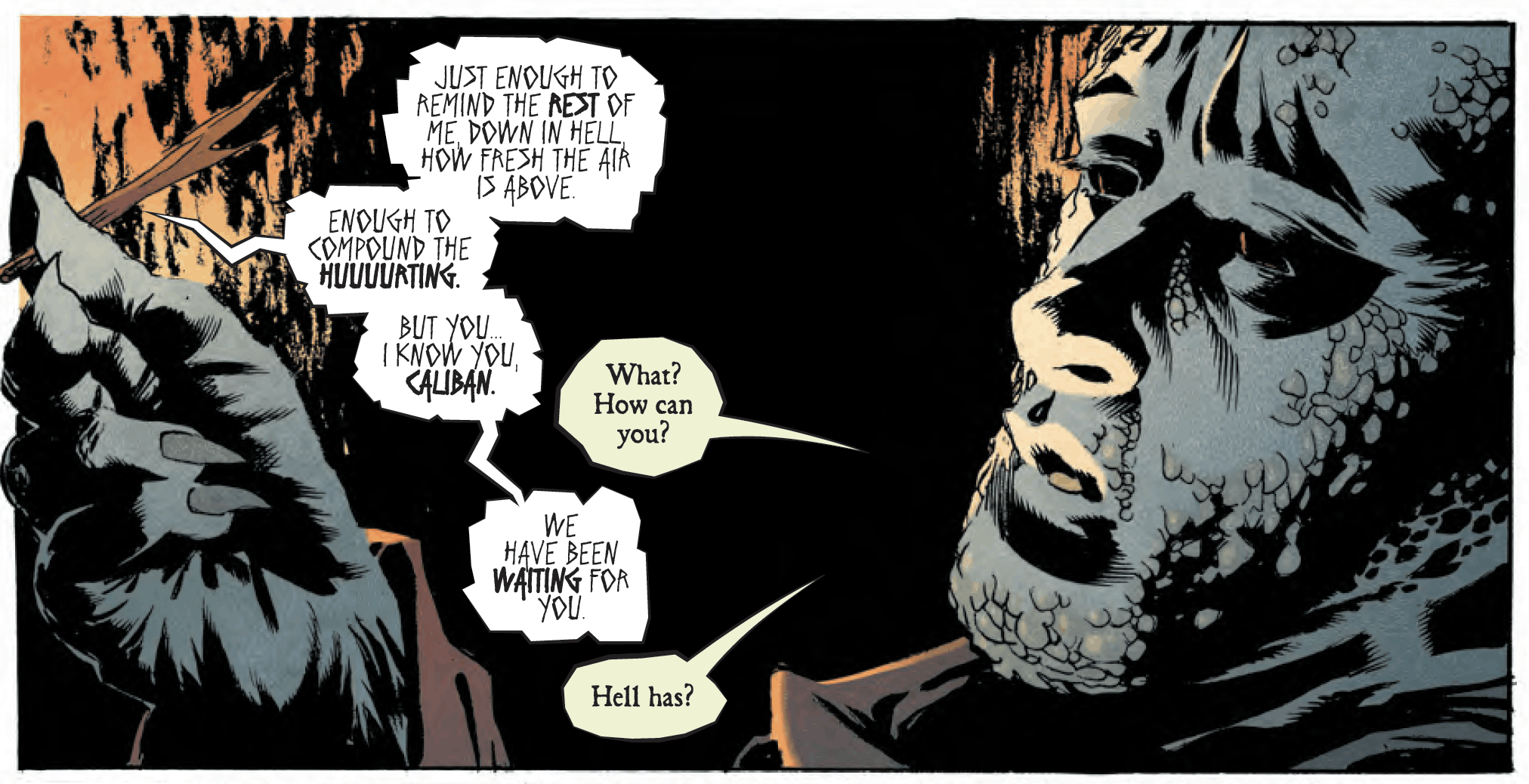 Fowler alone remains largely unchanged. He experiences several strong emotions brought on by consuming the demon’s flesh, and has to be forced to continue during a bout of depression. However, at the end of the meal the hunter largely remains the same prideful wretch he started, remarking that perhaps he would have made a better son for the Devil, as he alone can stomach hell. 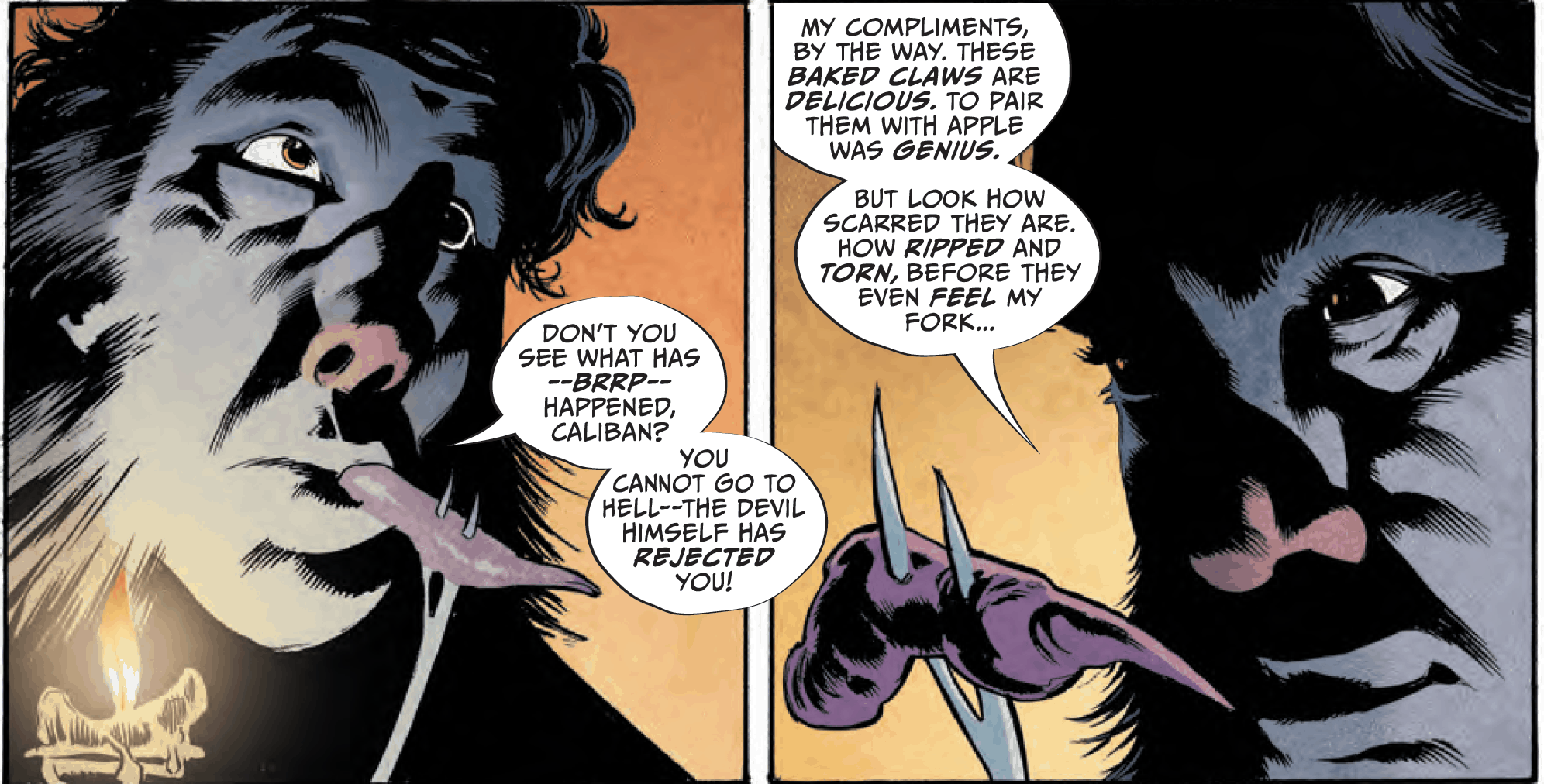 In a final twist we see that Fowler has not remained entirely unchanged by his experiences, as it is revealed that his is now as monstrous on the outside as on the inside. In the parting scene as Caliban leaves to pursue other adventures, he opens the doors to let in Fowlers hounds, who at the hunter’s own hand, have developed a taste for both demonic and human flesh.

A master weaving of multiple storylines tells the tale of an episode in Caliban’s past as we take a departure from the main storyline. Caliban meets a hunter, Lord Fowler, and together they devour a demon in order to learn more about Lucifer and the denizens of Hell. This was an excellent gothic treat reminiscent of “House of Secrets”/ “House of Mystery” and well placed in the Sandman Universe, but it remains uncertain how closely it connects with the current story-arc concerning Sycorax.