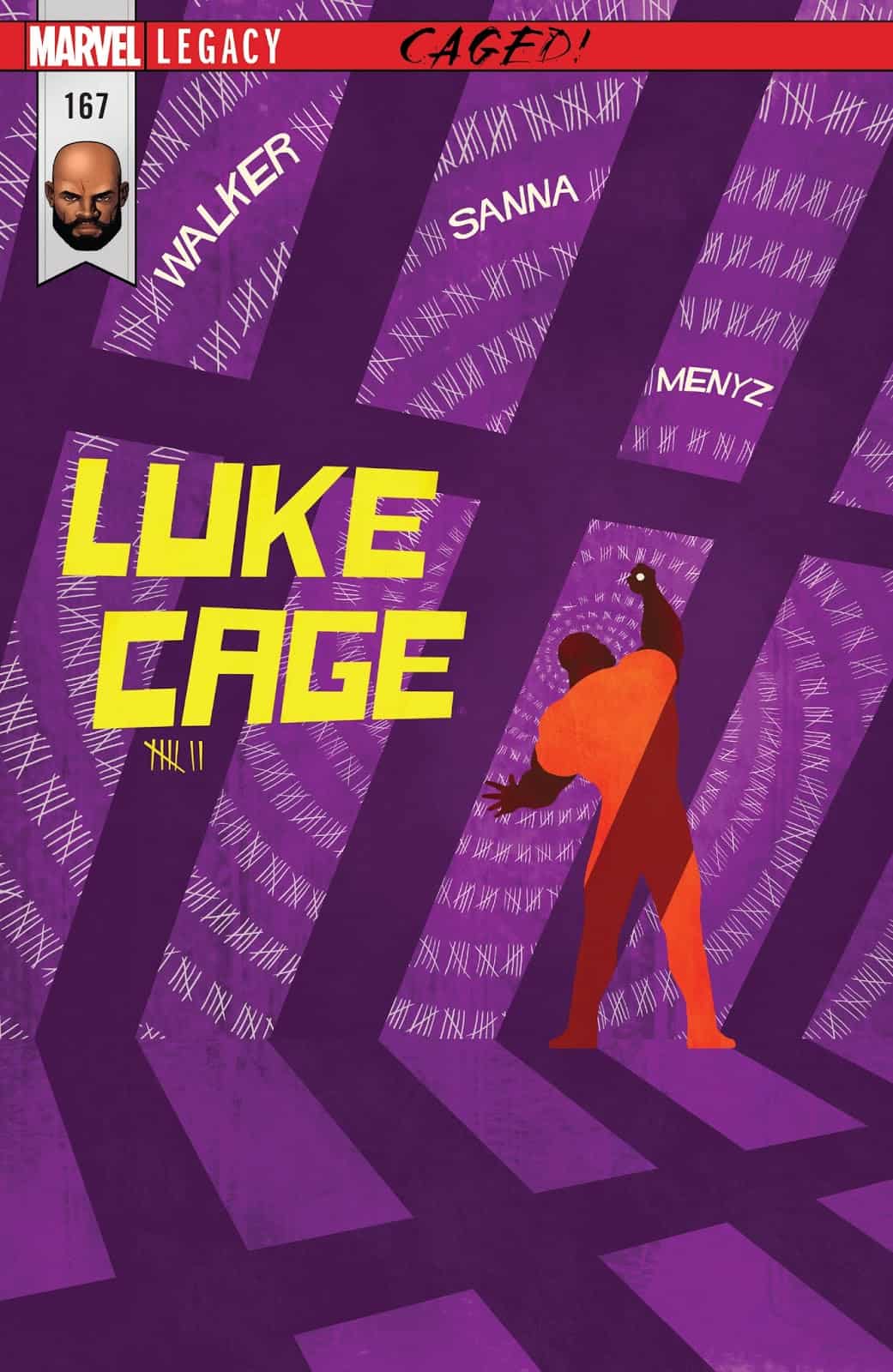 While returning from New Orleans to New York, Luke Cage stops at a small town. Unbeknownst to him, a mysterious person has seemingly brainwashed the entire town and the arrival of the Hero for Hire has led them to mistakenly believe that he is there to end their scheme. The mysterious villain reveals himself to be the hypnotic Ringmaster and seemingly begins the process of brainwashing Cage who later awakens to find himself in prison once again.

Like many of the Marvel Legacy renumberings, the Luke Cage book has brought the character back to his origins. While in other books this has meant bringing back earlier aspects of the character or revisiting old storylines, the Luke Cage book has sought to revisit the origins of the character. The first arc focused on the scientist responsible for Cage’s powers, while this arc returns Cage to a prison setting. The previous issue ended with Cage being captured by the Ringmaster after a resident of town Cage was passing through accidentally alerts him to the strange occurrences of the town.

The issue opens with the waitress, who alerted Cage to the Ringmaster’s conspiracy questioned by the villain as to how she escaped his mind control. He then turns to ring alarm bells throughout the prison seemingly a part of his mass hypnosis which causes Luke and several of the other prisoners to recoil in agony as they try to remember who they are before they finally give in and fall under Ringmaster’s control. He then turns back to the waitress and hypnotizes her once again, stopping her protests. 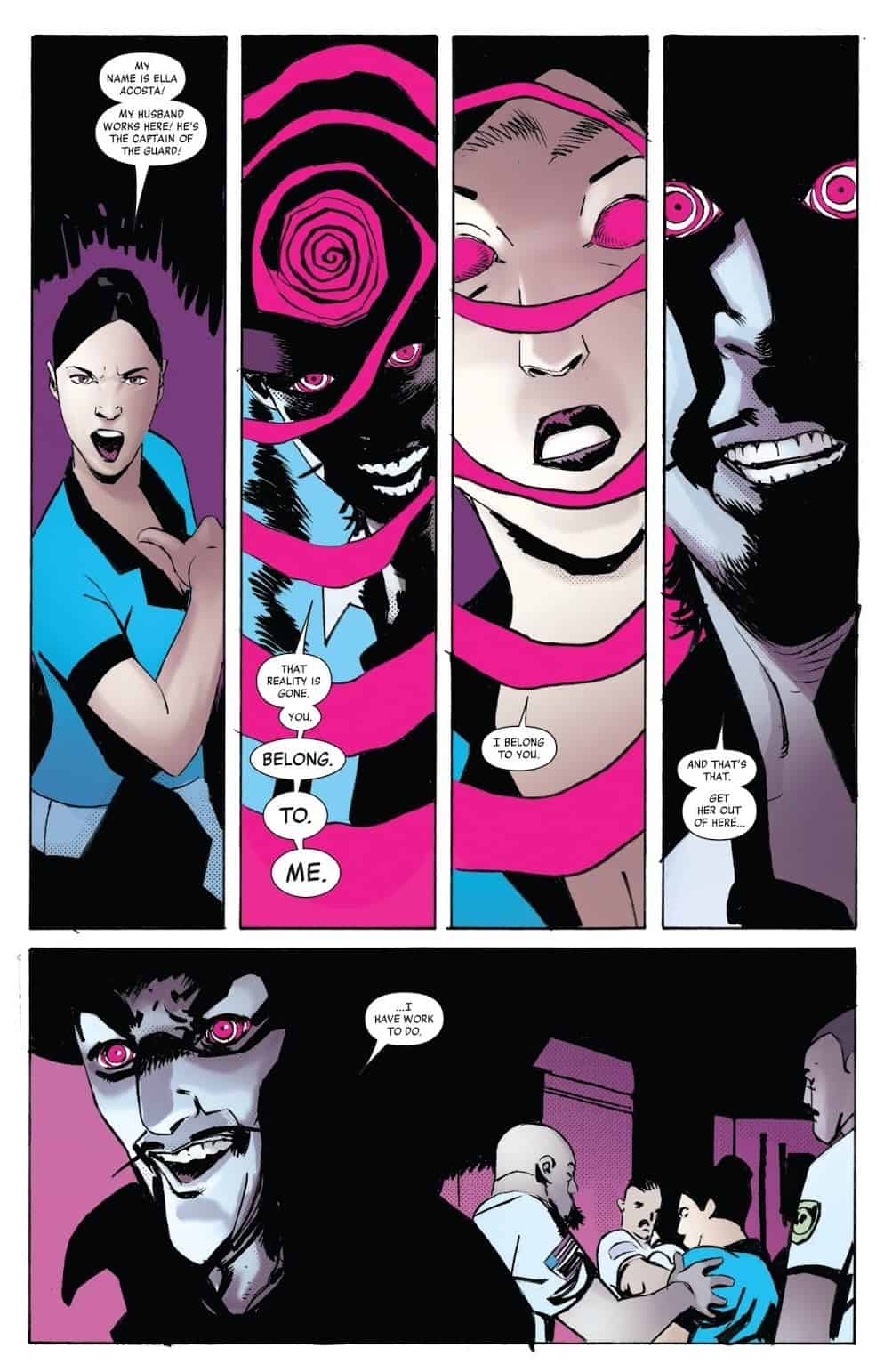 The issue then moves to the prison mess hall. Luke is approached by a fellow prisoner recognizes him as a superhero and is also seemingly aware of Ringmaster’s conditioning. He mentions that Ringmaster has been sending prisoners down into a mine and that none have returned. 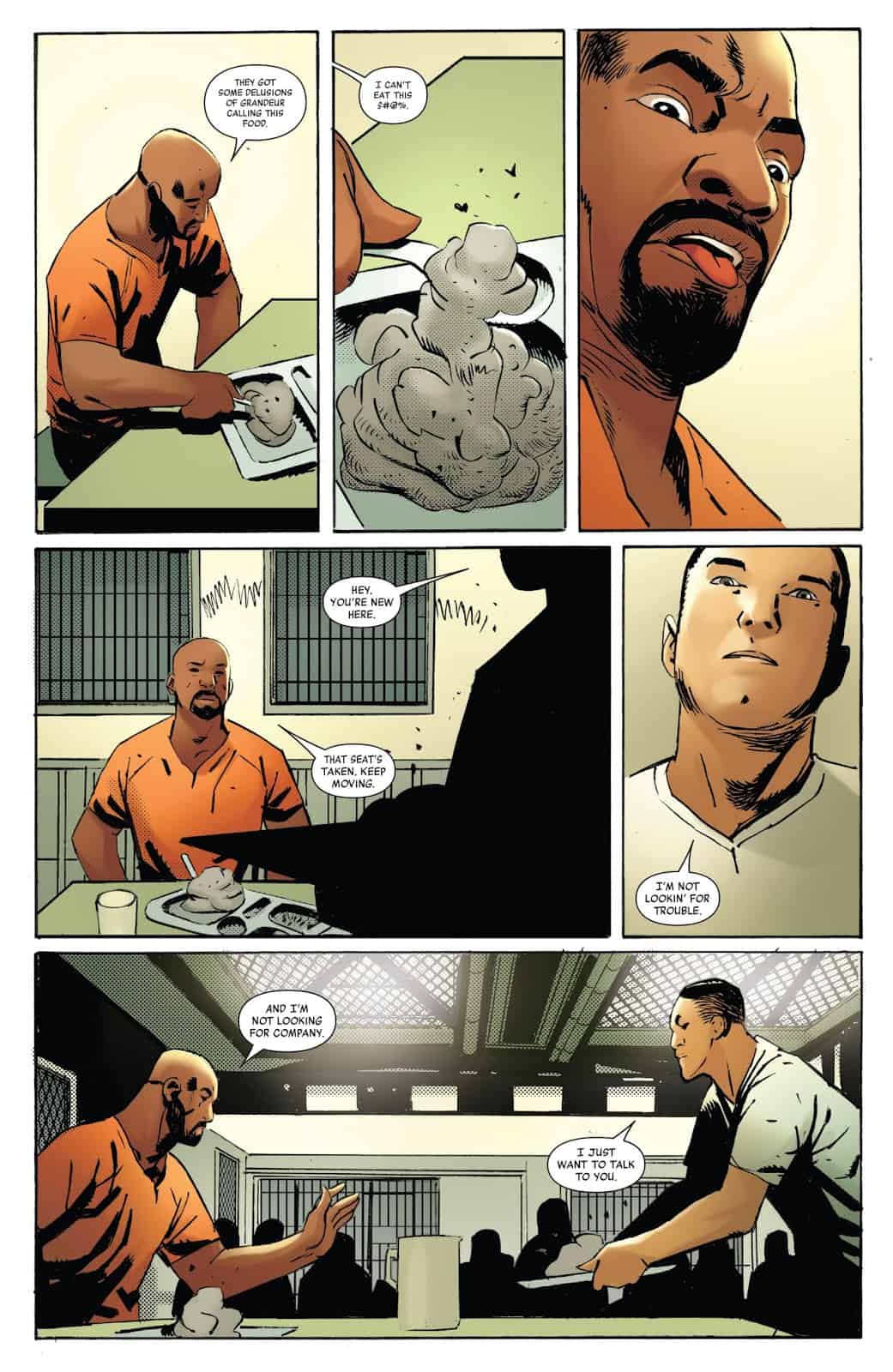 Ringmaster quickly notices the two conversing and once again activates alarm bells throughout the prison once again immobilizing Cage and his fellow prisoner while leaving all the other prisoners unharmed. He orders the prison guards and several of the other prisoners to attack Cage and the other prisoner. Luckily while Luke doesn’t know about his powers. He retains them and is able to fight off most of the assailants, before Ringmaster himself intervenes and immobilizes the duo before he again orders the guards to attack Luke, this time using his powers to make Cage believe that he is feeling the pain of each blow. 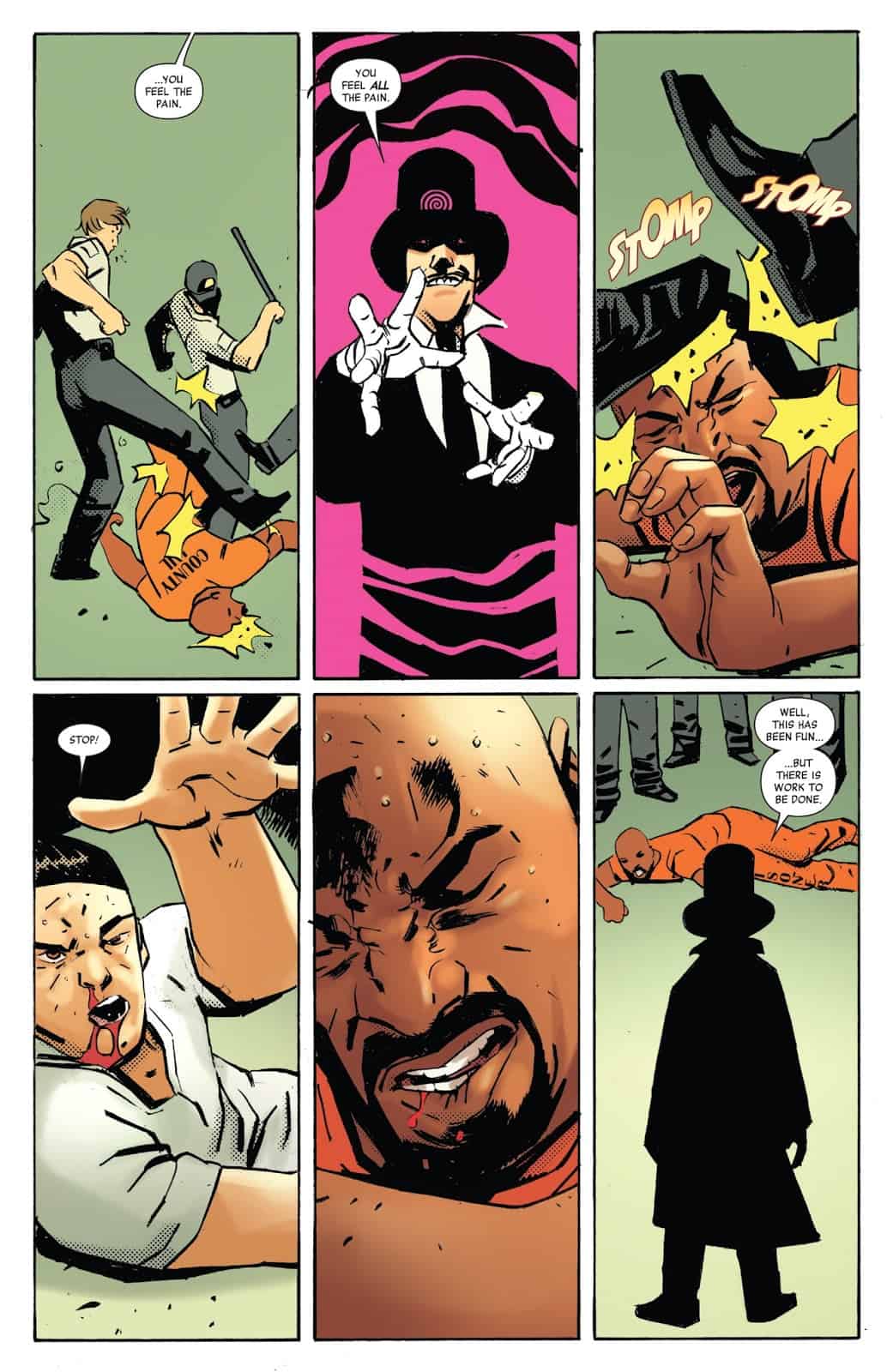 After the beating finally ends, Ringmaster orders the two prisoners to be taken to the mines. A place that no prisoner has ever returned from… 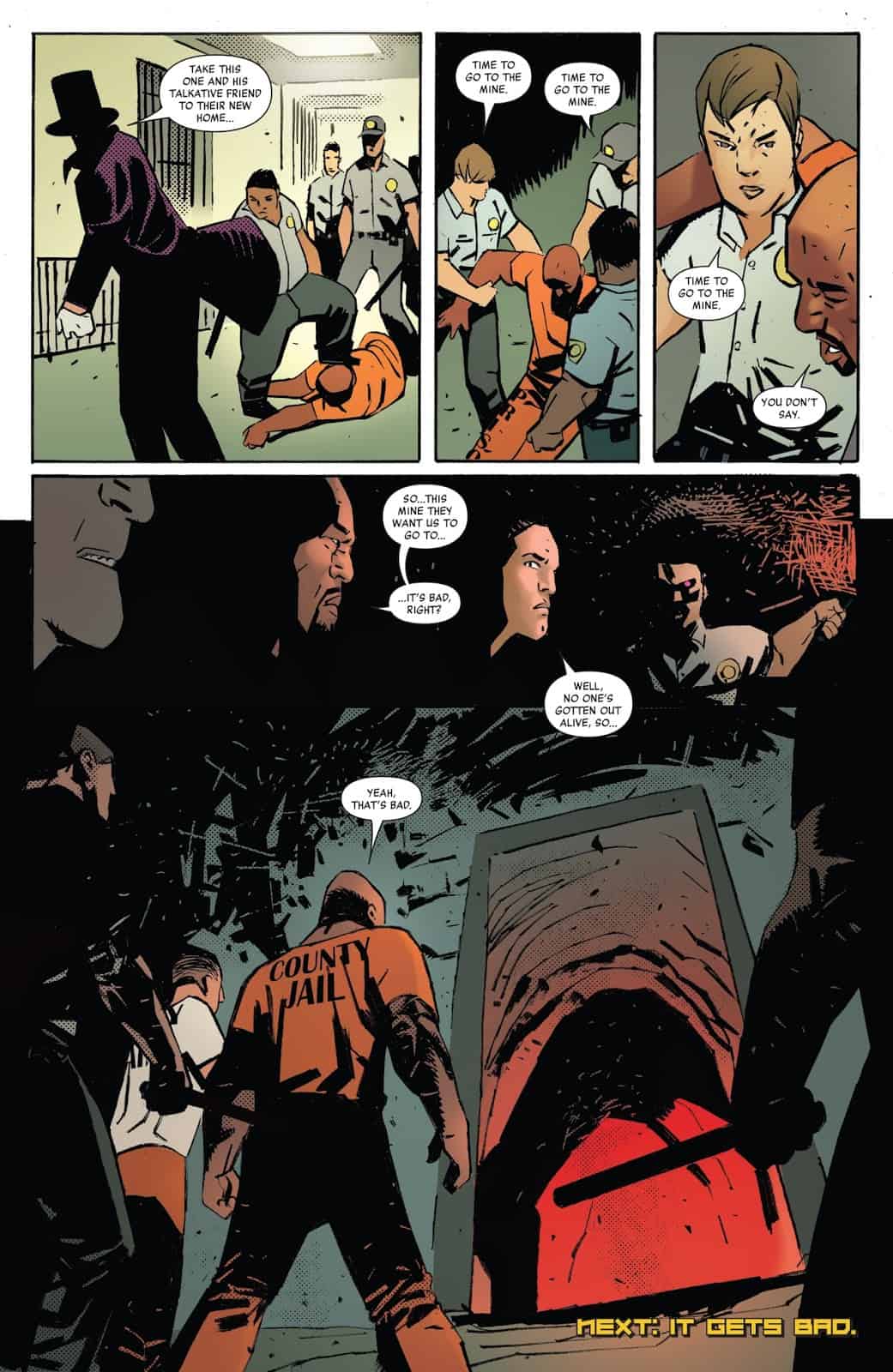 Each story arc in this book so far has been a standalone story. However given that the first arc in the series took place in New Orleans, each arc in the book will likely follow Luke’s journey back to New York.  As part of the aim of Marvel Legacy to return to the roots of its characters, this arc revisits Luke’s time in prison. However, unfortunately, I don’t think it quite gets it right. Though I’m loving Ringmaster’s conspiracy and I definitely want to see what his endgame is, I’ve felt the pacing is a bit off, where it already feels as if the arc is coming to a close.

The fast pacing is part of the reason that I don’t find this story arc as good as it could be. My favorite moment in this book was where one of the other prisoners approaches Luke and he slips into a prison persona and demands to be left alone. This to me felt like even without knowing who he is, Cage instinctively adapts back to a prison environment. I thought this was really well written but the problem I found was there just wasn’t enough of it. Giving the arc a faster pace doesn’t allow us to see how Luke adapts to life back behind bars which ultimately would make for a much more interesting read. In addition to this when I started this arc I expected that there would be more of a look at the issue of incarceration specifically amongst African Americans and now having read the first two issues, again I feel like an opportunity has been missed. Unlike the Sam Wilson, Captain America book and the Falcon series which look at race issues really directly (which is a good thing), the Luke Cage book I felt would have been able to relay a political statement without making it the core focus of the story.

Aside from the pacing, the story flows pretty well and an enhanced Ringmaster makes for an amazing villain, and definitely one that readers would not expect to find so menacing. The art Sana uses to show off his powers just adds to that menace. I cannot wait to see how they explain his enhanced powers and what how that ties to what he’s looking for in the mines.

Final Thought: The main issue this faces is it’s pacing. It just moves towards the penultimate chapters of the story arc too quickly which s a shame because the writing is really strong. Luke gets some really great characterization and Ringmaster is probably one of the most surprisingly scary villains this year, but specifically Luke’s interactions in the prison, which definitely should be more of a focus, especially in this issue. However, the decision to move towards the conclusion of this arc means that we miss out on more of some of the strongest content in this issue.