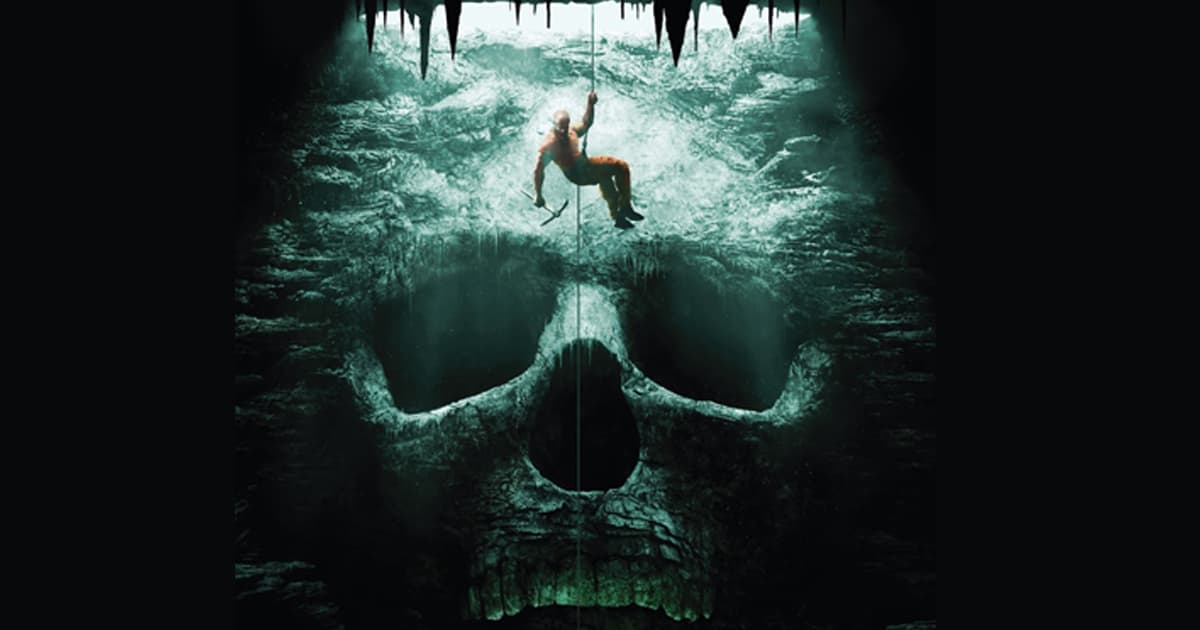 On his journey home from New Orleans, Luke Cage passes through a small town under the control of the villainous Ringmaster. Thinking that the hero is there to stop him, Ringmaster orders Cage’s imprisonment and wipes his memory. However Cage’s stay in prison was short, as Gonzo another prisoner who recognizes the hero ends up getting the pair sent down into the mines deep below the prison… 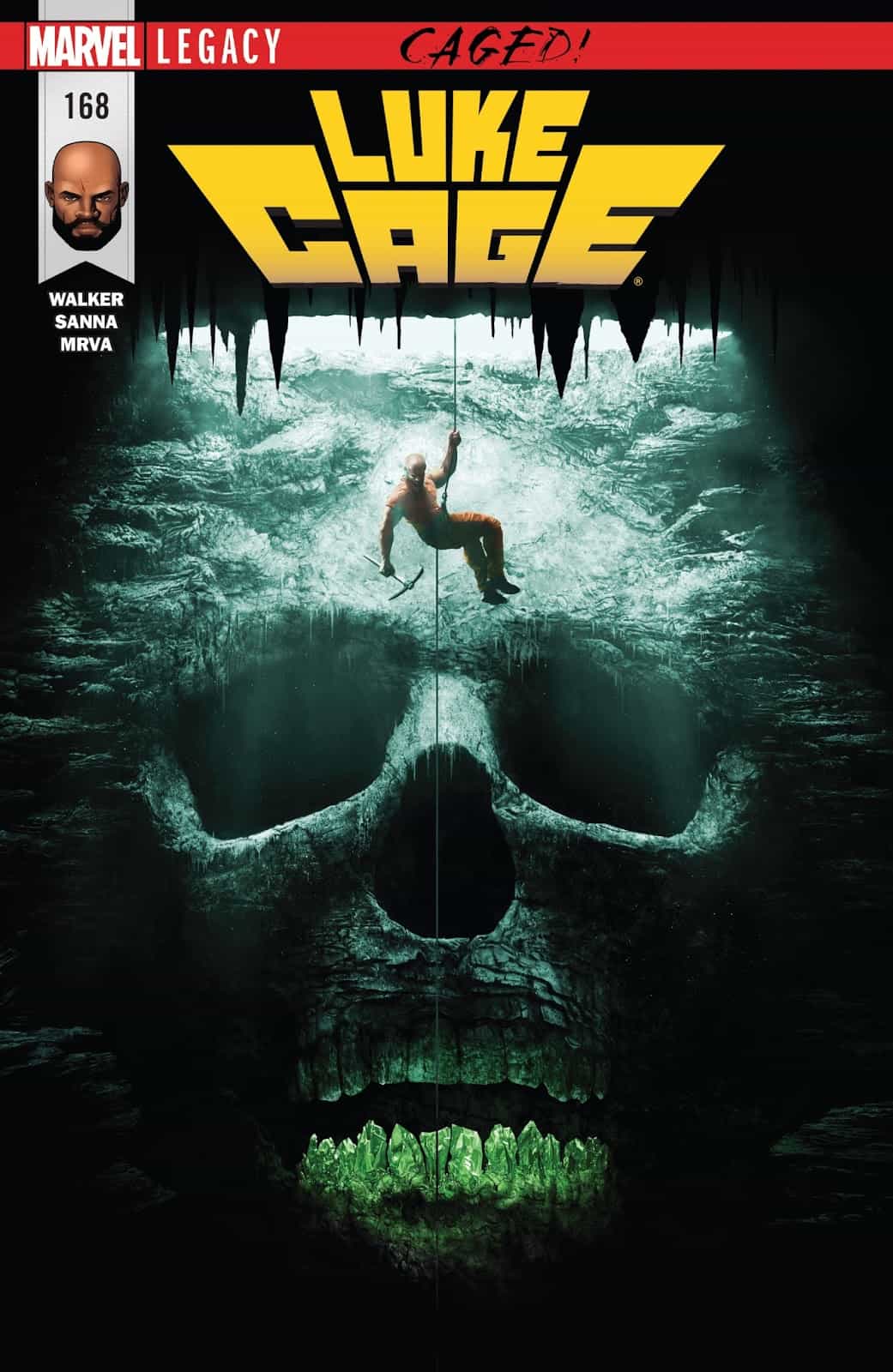 Prison and human experimentation are both core aspects of Luke Cage’s origin and the Marvel Legacy run has brought the character back to these ideas and this story arc highlights both of these quite well. In almost a callback to his origin, where he was set up by Diamondback, Cage is wrongfully imprisoned because Ringmaster believes that the hero has come to stop his scheme involving a small town and its prison, where Ringmaster has seemingly enhanced his hypnotic powers and is testing them on the prisoners. Perhaps the most interesting thing about this arc in regards to its role in Marvel Legacy is that Cage has been mindwiped and doesn’t know who he really is which allows for a more stripped back version of the character where we can see Cage’s personality without the powers.

The issue opens twenty years prior to the beginning of the series, with a group of what appears to be AIM scientists dumping radioactive and mutagenic waste from various experiments and then burying them. Then the issue shifts to 10 years afterward where the contractor building the prison is told that the ground is heavily contaminated, the contractor ignores this information and the construction of the prison continues. The issue then jumps to a year and a half before the current issue, where Ringmaster is transferred to the prison and the waste buried beneath the prison begins to alter his powers. 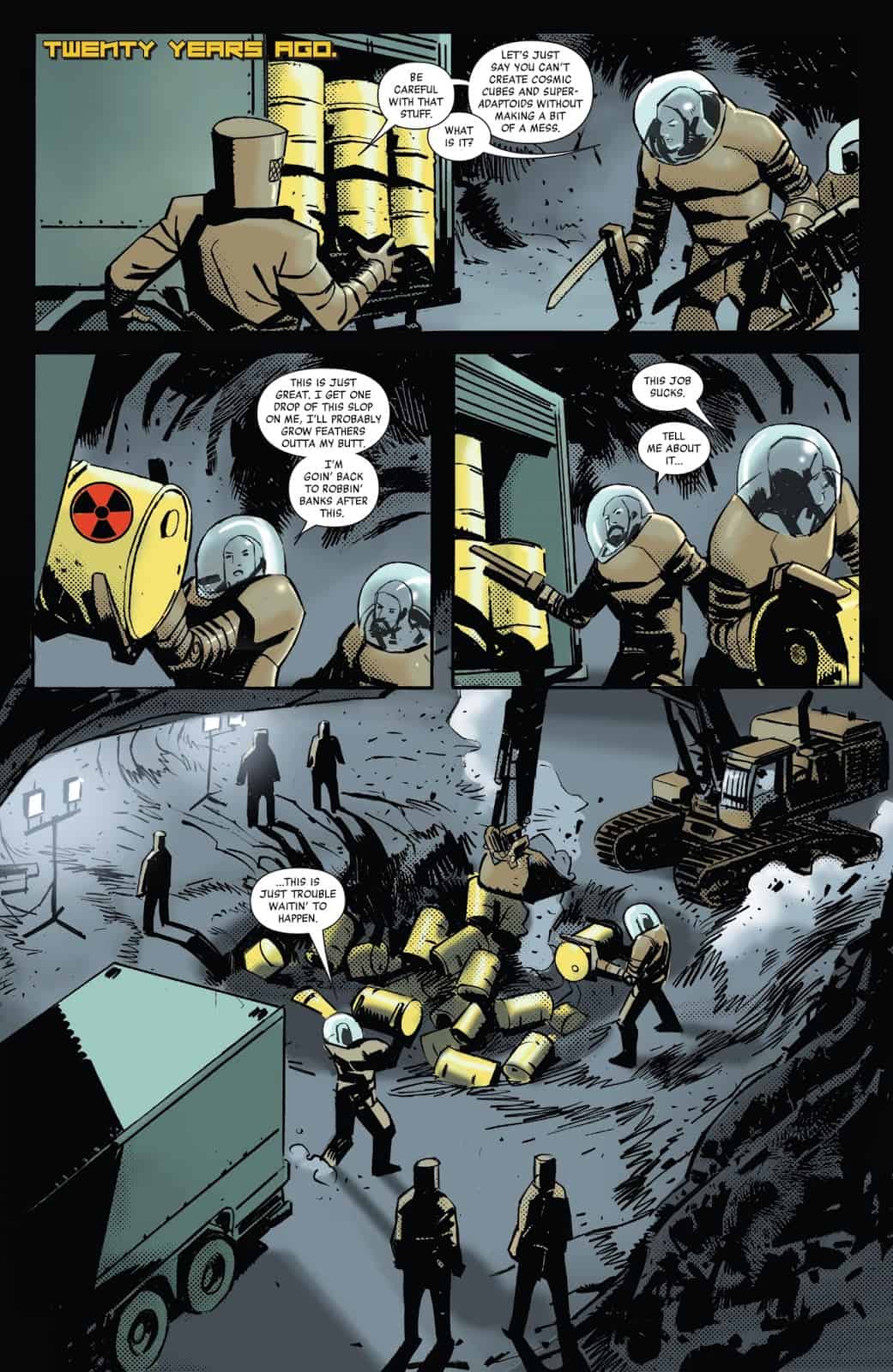 The issue then jumps to Luke Cage, Gonzo and some of the other prisoners digging for something in the mines. Luke doesn’t understand why Gonzo is so scared of the mines though Gonzo explains how prisoners get sent to the mines, never to be seen again and then several weeks after they are seemingly replaced. They also note that they have flashes of their previous lives but their memories are still blocked by Ringmaster’s hypnosis. The conversation is then stopped by a prison guard wearing a gas mask who orders the two to work faster

The issue then cuts to Ringmaster who has gathered all the townspeople in the prison yard to reinforce his hypnosis, however after the crowd disperses he collapses to the ground… 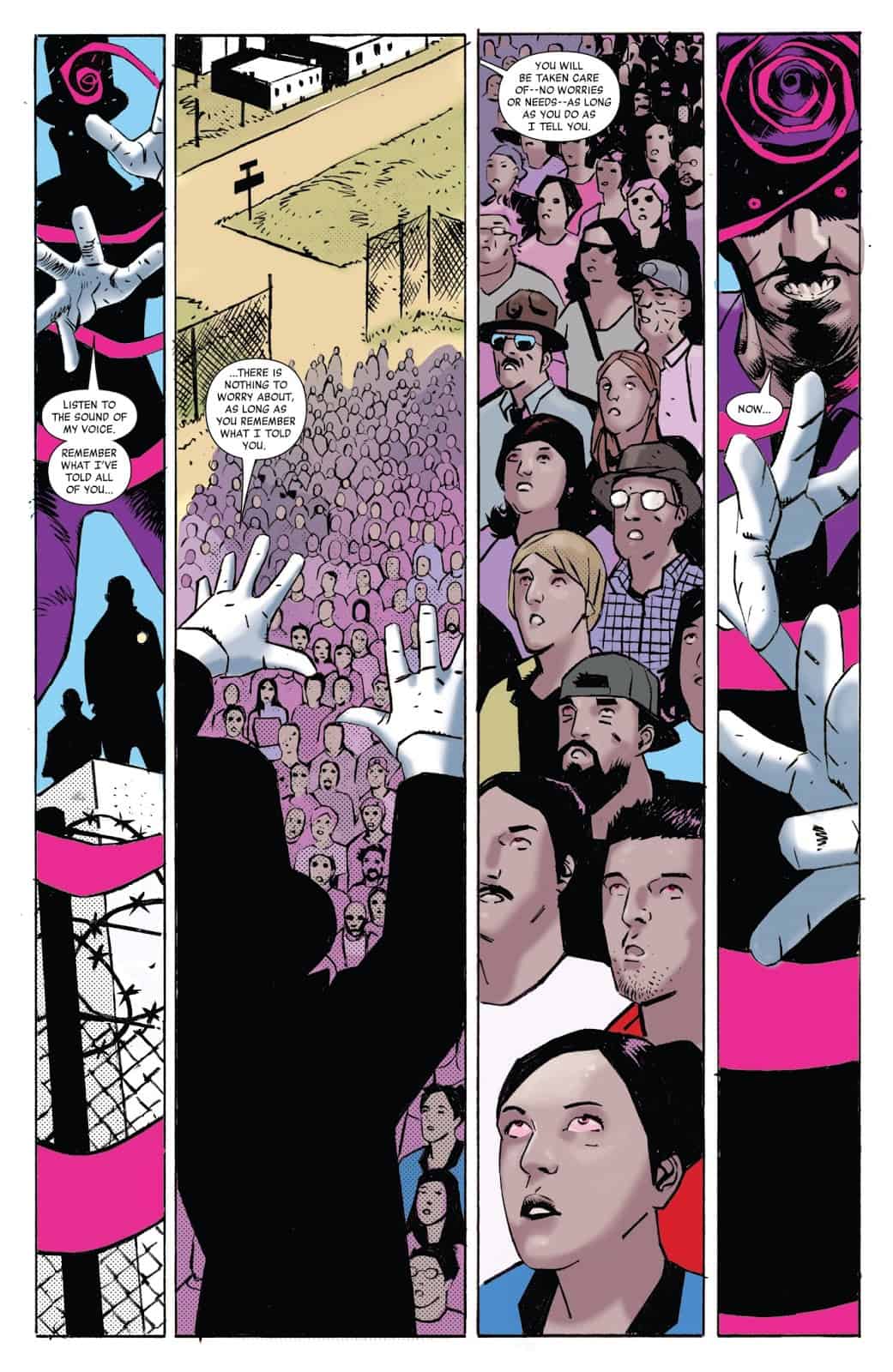 Back in the mines, Cage digs up ground saturated with the toxic waste which another prisoner delivers to the guards in a wheelbarrow. The guard then takes the waste to a lab where the earth is refined into some kind of chemical. Ringmaster then enters and demands the chemical to boost his power and allow him to retain control of the town. He then removes his top hat revealing that his skull and brain have been greatly disfigured. One of his scientists then injects the chemical cocktail directly into Ringmaster’s brain. 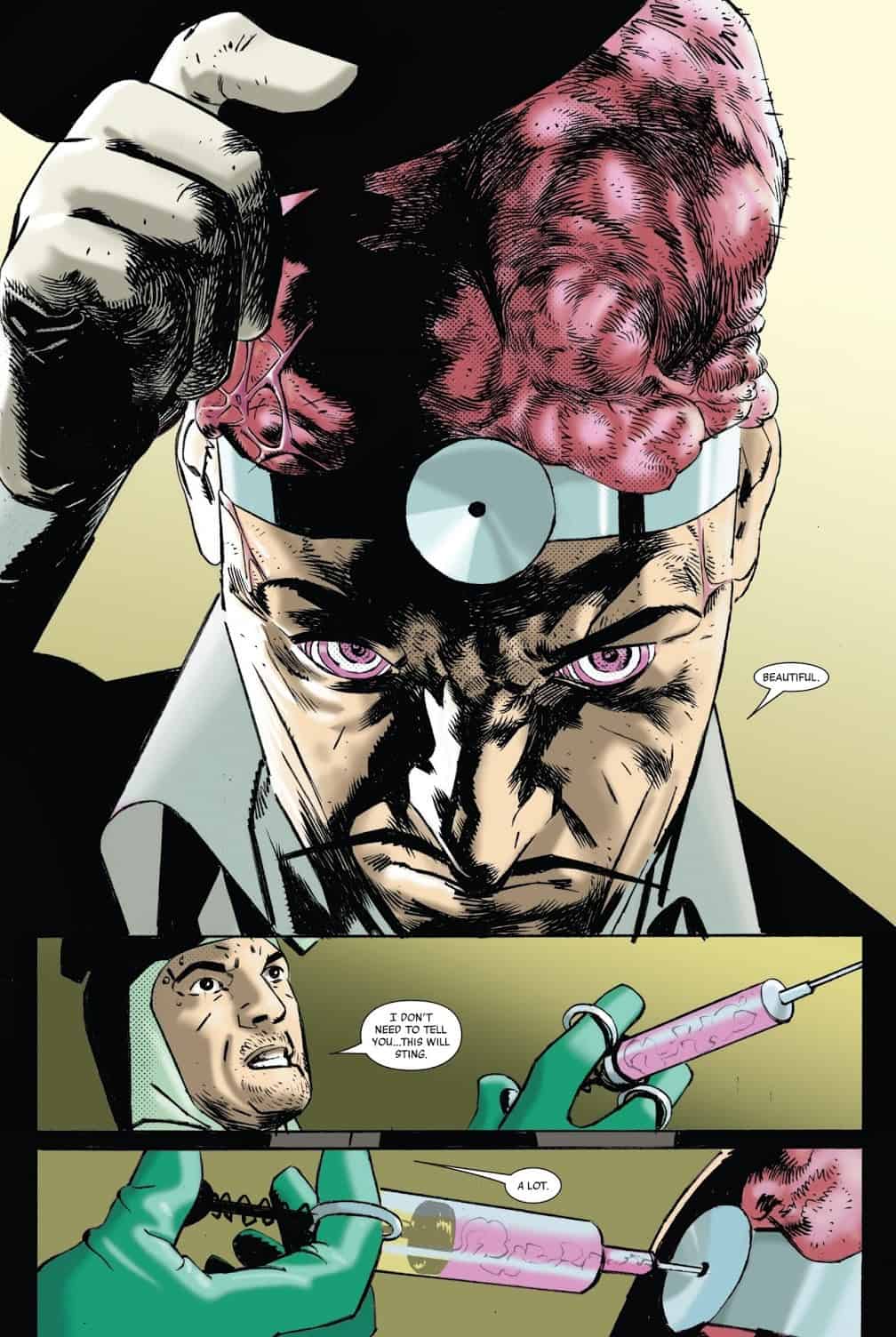 While this delivery is made one of the other miners collapses. Cage attempts to help the man but one of the guards orders him to move out of the way and then shoots the collapsed man.  Cage and Gonzo are made to carry the man’s corpse to a site where all the missing prisoners are buried. At this moment Cage lashes out at one of the guards and to his surprise their bullets ricochet off him, hitting the support structures and causing the cavern to collapse. As the rocks fall down around them Luke dives on top of Gonzo, shielding him as they are buried alive 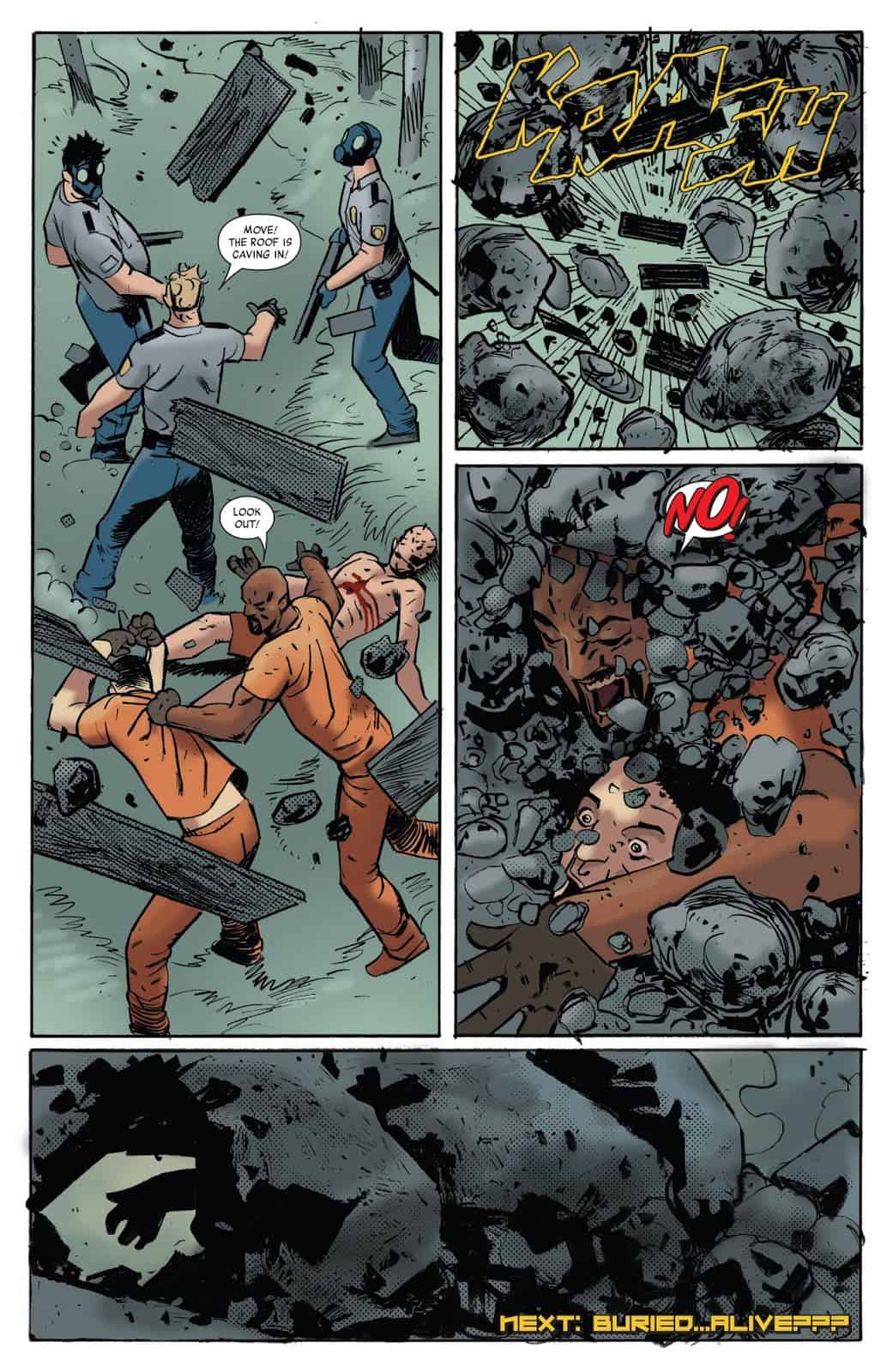 Ok so before getting down to this issue specifically, I need to readdress my main issues with this story arc. If you’re looking for a more in-depth breakdown check out my review for #167 but the crux of it was that I felt there was a definite missed opportunity to go into a little more depth with Luke Cage and his interactions within the prison. I think this was mostly due to the pacing of the arc and I think that adding another issue would have allowed the same story to be told but go into a little more depth.

Now onto the rest of the review.

Firstly the breakdown of Ringmaster. One of the most surprising things about this arc was how great a villain Ringmaster is and this issue definitely gives us more of an insight into his motivations. Ringmaster’s treatment as a D-List villain both in-universe and from a writers perspective plays heavily into this arc and while it may not be as grandiose or expansive as a lot of other villain plots, for Ringmaster to have his powers enhanced to the point where he is capable of hypnotizing an entire town does seem reasonably impressive. I think Walker made a very good point in this issue that a lot of the villains in the Marvel Universe aren’t nearly as ambitious as characters like Dr. Doom or Kang, instead we see a villain who’s crowning achievement is comparatively small but we still realize the significance of Ringmaster’s achievement. Just because the entire planet hasn’t been conquered doesn’t make Ringmaster any less of a villain. I have a feeling the length’s he has gone to maintain his control, the disfigurement that the waste has caused, is going to be a big point when his control is finally broken. I feel like Ringmaster is almost in a place where he has to die or be completely broken in order to give the story a proper end and I think it would be almost classically tragic, achieving his greatest before losing it all. My final word on Ringmaster is the art. I mentioned in my last review how much I loved Sana’s art for Ringmasters powers and I think this issue highlighted them even more. Just little details, such as the purple spirals in his eyes in close-ups of his face, add to the character and definitely make him a much more menacing and creepy character.

My other highlight of this issue was how they dealt with the mines. After the last issue, I expected that Ringmaster was after some mystical artifact but I think making it something much more mundane (for a superhero comic) was nice. I think I like the toxic waste thing so much because it just feels like a villain version of Damage Control. Like for the super-science organizations like AIM or Hydra, it’s so obvious yet un-stated that their projects would leave waste products that would need to be disposed of. Like it’s not that big a part of the comic but it was something I immediately picked up on.

Luke Cage is a reasonably well-written character. One thing I’ve noticed from the last issue is that Cage even without powers still acts as a hero, protecting Gonzo and trying to save one of the other prisoners. I think in this issue more than anything Cage feels more like a background character with the Ringmaster’s plot being the focal point but I feel like this is generally a good thing. But I hope that the next issue will instead focus more on Cage and given how the issue ends I think it could be done similarly to the Netflix series, where we saw Luke’s origin story while he was trapped in the ruins his apartment building.

Final Thought: A few stand out moments in this issue. Once again Ringmaster is a surprisingly good villain and the issue reveals much of his overall scheme more than anything else. There’s less of a focus on Cage but I think overall while the book is good there’s definitely something missing that would make it a great issue.