Marauders #1: A Pirate’s Life For Me

When Kitty finds she is unable to enter the Krakoan gateways she navigates the stormy seas aboard a stolen yacht to arrive on the shores, bringing some cargo along for Logan. Seeing her journey as an opening for other opportunities Emma recruits her to the Hellfire Trading Company to help ferry others who for different reasons are also unable to access the gates to freedom.

Iceman and Bishop are separately discovering Emma may have a point and Bobby agrees to join Kitty along with Storm and a stowaway Pyro to go to Vladivostok to discover what they can do. In true Kitty style she announces to the world that mutants can rely on her team to help those who find their way barred. This one act decides Kitty and she accepts Emma’s offer.

As the first title to follow X-Men #1 in the Dawn of X this is an important one in terms of introducing the new world we have woken up to. And I have to say we are off to a solid start. Setting up the island life is one thing but we also see the daily goings on of the Krakoan habitat and the outside world as truly separate entities. As well as the follow on from the human/machine augmentation from last week in the face off in Russia and Gerry Duggan has made sure that is followed through here. So despite the change in situation within the mutant community it’s already clear where the immediate opposition is going to be coming from.

But Kitty meets that challenge head on and does something which to a lifelong fan was equal parts shocking and yet inevitable. I had barely gotten over the surprise of her being unable to enter Krakoa (she isn’t used to brick walls so this was something she clearly was put out about herself) this was a double whammy. We sometimes forget she has some serious ninja skills and it was nice to see Gerry utilise that offensively for once in favour of the usual defensive or evasive manoeuvre. 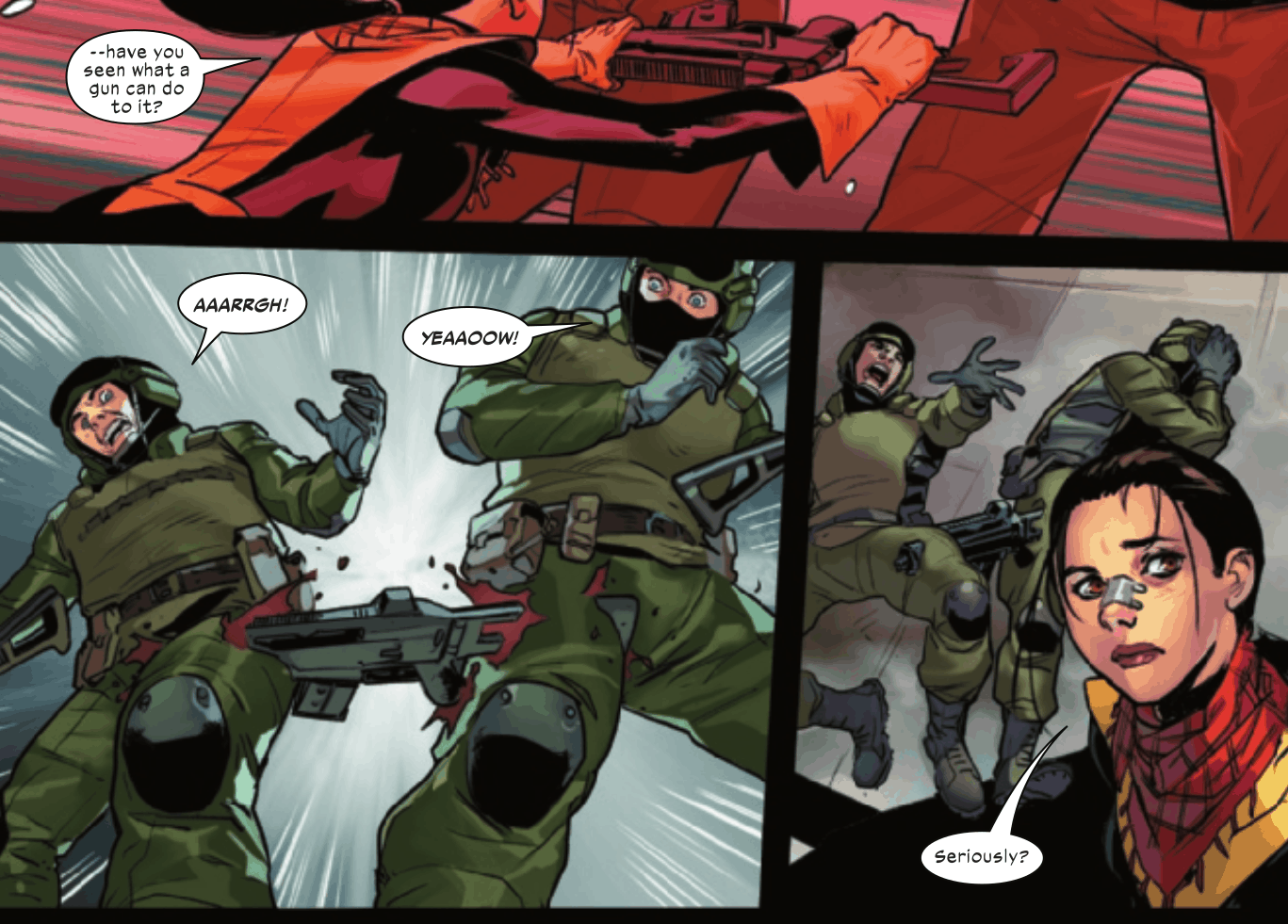 As shocking as that was though it clearly defines the lengths she will go to in order to see her people safely out of danger and her decision to accept Emma’s proposition is clearly defined in a believable way, as is her finally adopting a new name. Finally she is growing up. All this to me is totally in character. And also the unusual team name is brought up by Emma herself and a fairly well thought out reason for it is put forward. For the guerilla tactics ahead even X-Force would be too obvious and glaringly confrontational in the wider arena. This situation also had the striking hallmarks of X-Calibre from the Age of Apocalypse and so this highlighted one glaringly obvious omission. Pirates, swords and high sea rescues? It has to be Kurt. Though the assembled crew so far also has some very strong connections, as well as much potential for dynamic interaction. 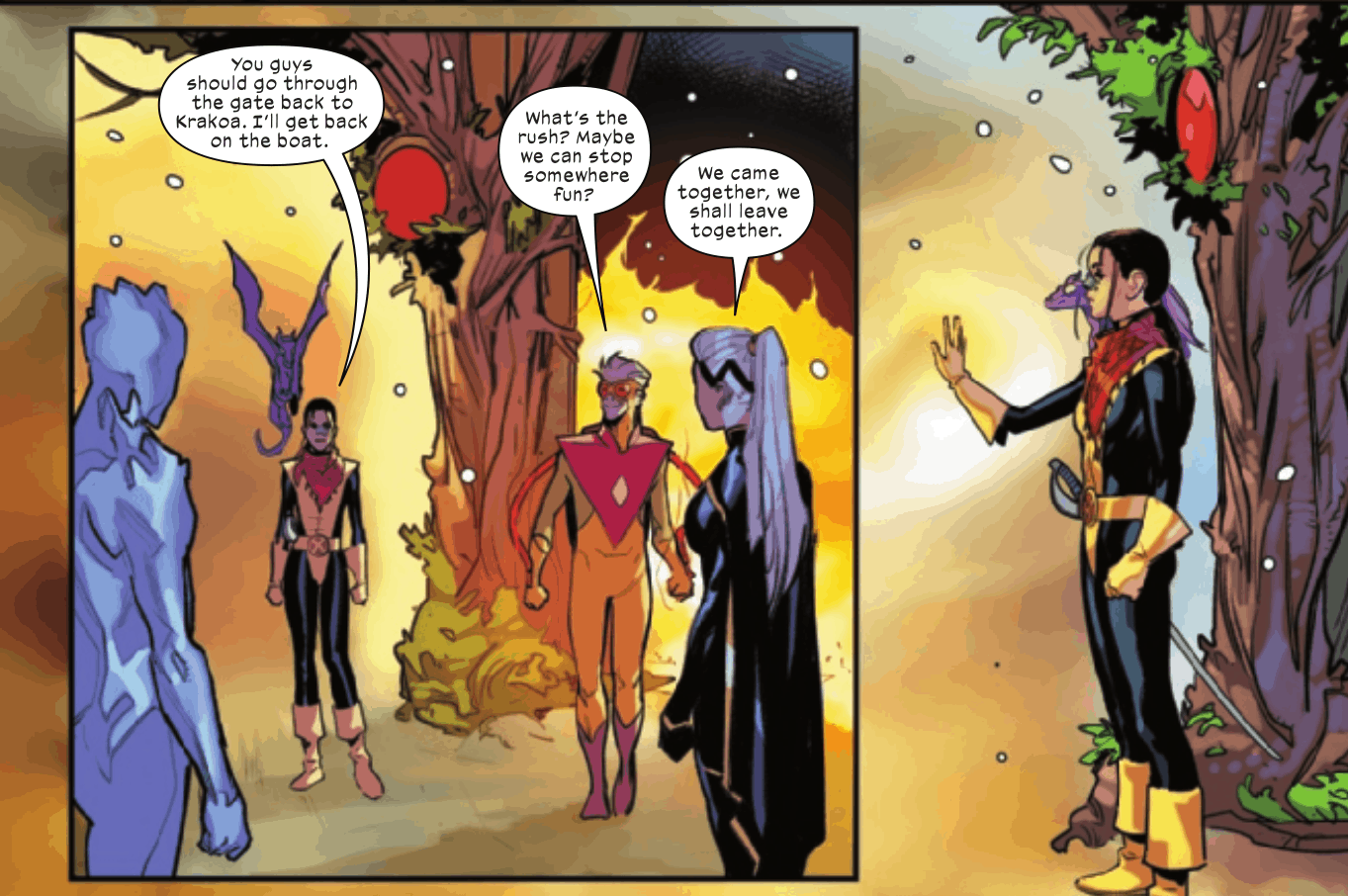 Kitty and Storm are an obvious pairing, one that hasn’t been properly utilised in years, and the added bonus of Emma playing Lady Penelope over in London pulling the strings will surely set up some friction later, which is already visible with Storm. Seeing the return of Bishop will ensure more good cop bad cop from his time in the unique IceShop. I can’t wait to see him on board and find out what his investigation into the so called missing Lim Zhao means for the team. Like ninja Kitty it is also easy to forget he was a cop at one point. And now also the duo that screams Super Hero Team Up…no I’m not talking fire and ice…though that will be an interesting one even if it’s not Bobby’s Pyro Simon…no I mean Pyro and Lockheed. To see Allerdyce take so well to Lockheed was a joy to behold and cemented the little guys place on the team as active member and not just a mascot or pet.

The art had a lot going for it as well. From the sweeping majesty of the island as Kitty arrives to the frenetic action packed fight scene with the Russians I felt drawn in enough to be won over and am keen to see the progression of the team next issue. Matteo Lolli knows how to draw realistic poses without making them seem hokey and the colours of Federico Blee are the perfect complement to a landscape of outstanding natural beauty that is the shores of Krakoa. As well as giving us the perfect slapstick of Kitty face planting the gate. I actually felt that.

As subtle comedy moments go this was the start of some tongue in cheek humour that belied the seriousness of the dilemma they are facing from the outside world. We see Kitty talking to the annoying girl who’s mutant power seems to be rubbing salt into wounds. Not to mention the exchange between Kitty and Bobby about the gate and having the top men on the job. 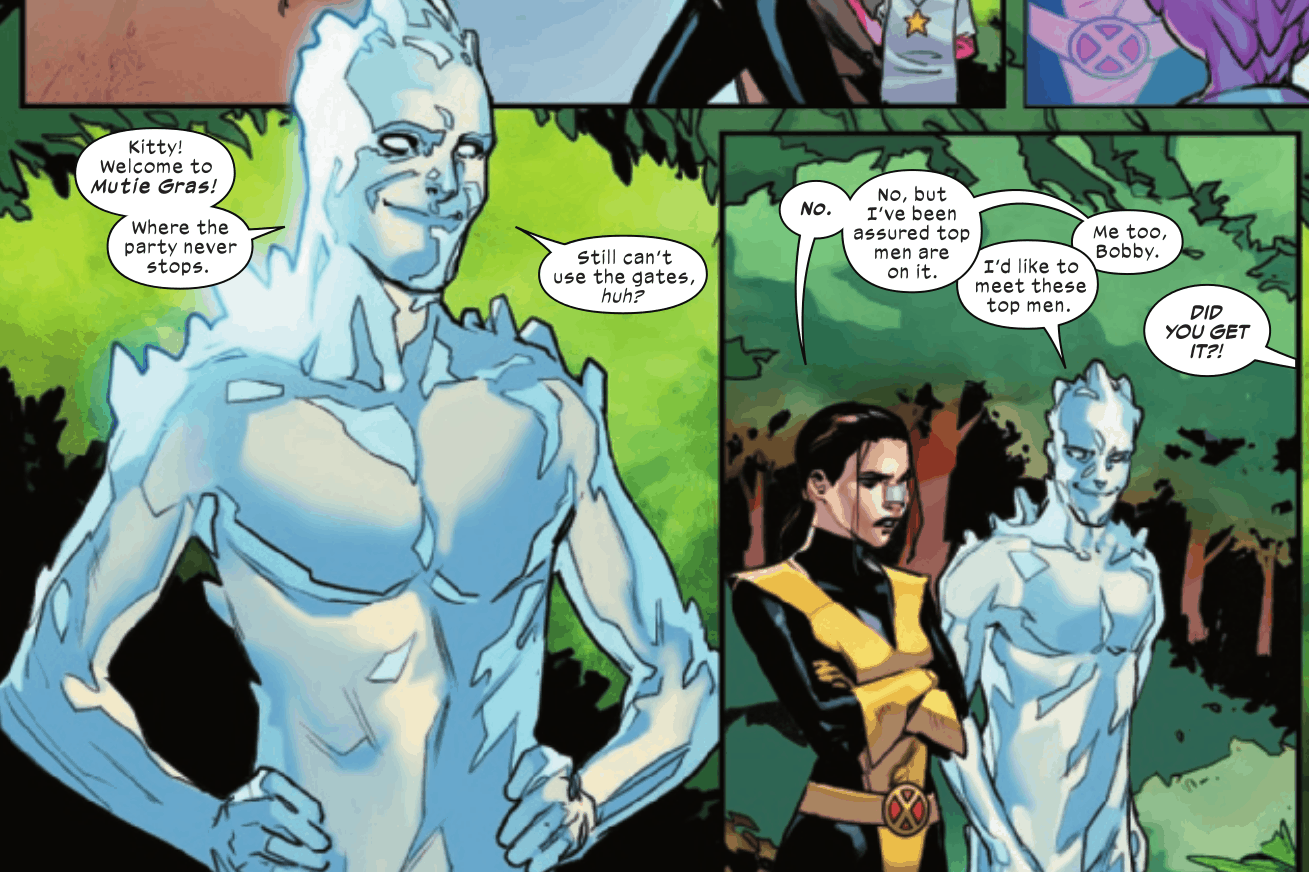 Yes Logan, I got it. And I thoroughly enjoyed how Logan was so fired up about the arrival of supplies, the Pomade being another nice throwaway gag there. I even began to sense a slight ‘Lost’ vibe, even though the island itself played a very minor part and was curious to learn all I could about the place. But once things got going it made total sense. This story isn’t about the island, it’s about the journey of those who can’t get there and the hurdles they must overcome to do so. After all, if it was easy everyone would be doing it right? But at it’s heart this is about the wider implications of this new Mutant Sovereignty. And I am on board with that.

A great start to a new adventure for a team that has strong potential within for so many reasons. Let's go pirating.

Marauders #1: A Pirate’s Life For Me