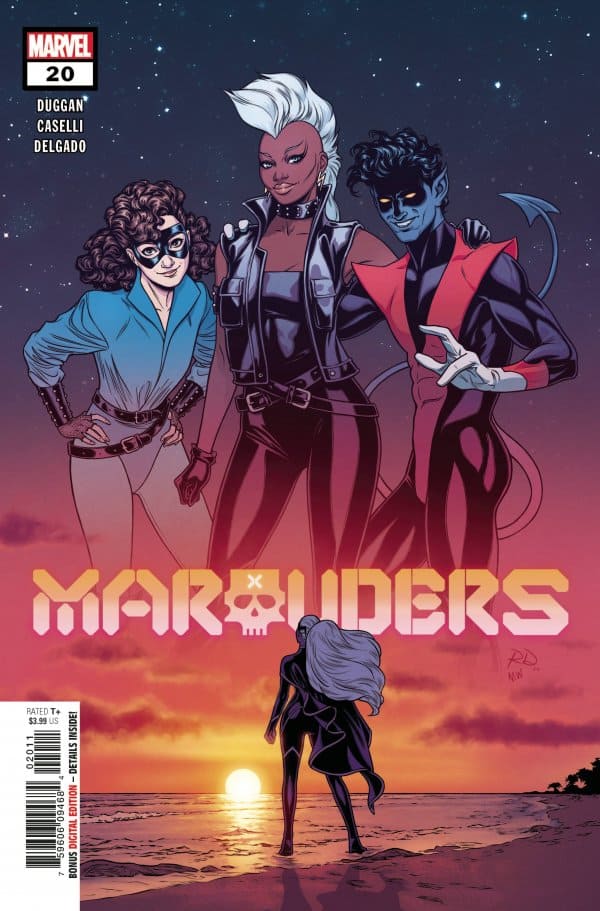 This was perhaps the first issue of Marauders that I found to be less than entirely splendid. That’s not to say that it was bad, or anywhere close to it. There was a great deal of good stuff in these twenty-six pages, including excellent art and some fair characterizations, but the book felt hollow despite this for reasons that I will presently explain. Without going into spoilers (there was nothing to spoil, in this book) we find our heroes at an intimate dinner party, away at sea, on the eve of the much-promised Hellfire Gala. They are saying a formal goodbye to Storm, as she prepares to depart for… somewhere. The readers garner no answers about where Storm is departing to.

Over the course of the meal we are subjected to a running bet (the prize are tokens that can be cashed in, at a future date, for favors) concerning the number of knives that Ororo has secreted about her person. Alongside this meagre fare, we are treated to flashbacks of significant moments in Storm’s history. These moments are not, in fact, particularly significant to the character’s history. It’s not a strong goodbye to the character, honestly. But then she hasn’t really played a very important role in the series so far. Marauders is Kate and Emma’s story. That’s not a flaw (it’s a good series, exploring necessary themes) but it is difficult to put a lot of weight on the departure of a character who hasn’t been allowed to have much of a role in the story as we have it.

This issue wasn’t bad. I want to emphasize that this series is one of the best that Marvel is producing. The writing here wasn’t Duggan’s best, but it was still good. Most of the flaws in this book come down to the fact that this issue is set right before a major event for the entire line of X-Books. It’s essentially filler.

There were, as I said, many good points. The note about the significance of Kate’s pin (featuring the cosmic bullet she rode into oblivion) was really wonderful to see. The contrast between Storm’s cool, almost happy appearance and the storm her unconscious summoned above the ship was wonderful to see. She’s worried about something. She’s angry. And she doesn’t want her friends to know. That’s a good, highly effective merger of writing and art, and I was happy to see it.

Indeed, Caselli’s art is truly top notch. There’s a wonderful subtlety to his line work, and that breaks ever so often into force, conveying appropriately powerful, revealing emotions. The color work was spot-on as well, lending depth and heft to scenes which could have been less satisfying.

Taken together, accounting for the fact that this story was intended as filler, it was a good story. Less satisfying than others, but ultimately worthwhile.

Exquisite art elevates what could otherwise be described as an ocean-bound flashback episode.