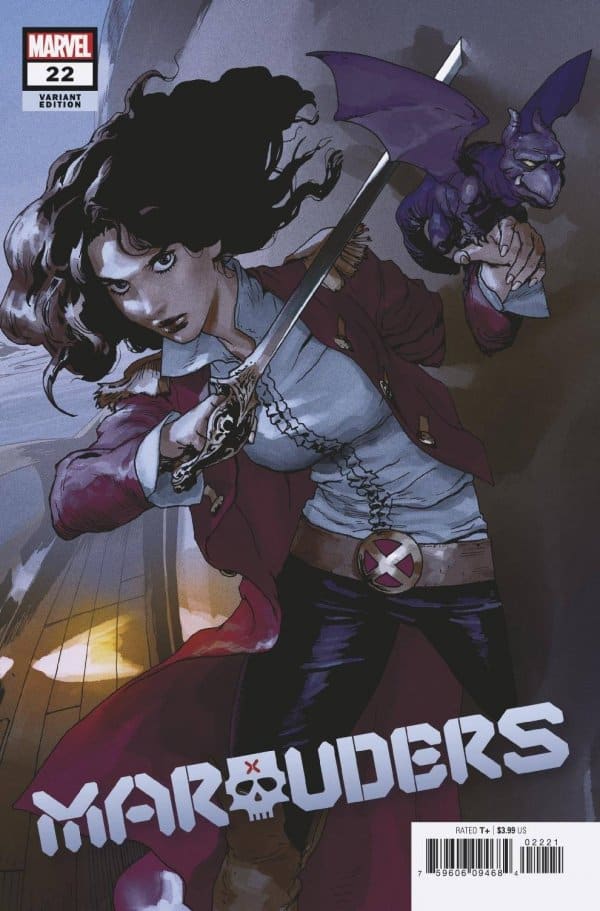 What really happened to Lourdes Chantel?

Trigger Warning: Sensitive topics such as rape and abuse are discussed in this review.

I’m going to give a content warning here (one that was not provided by the publisher) Marauders #22 deals with men perpetrating the rape and physical abuse of women and girls. I am a survivor of rape and physical abuse, and although my PhD is not in psychology, I am exceedingly well versed in the mechanisms of abuse — as well as the psychological after effects. After my review, I’m going to provide links to resources for people who are, or have been, survivors of rape or physical abuse. These resources are  provided by organizations that are dedicated to helping survivors of all genders. If you need help, please do call or click. Asking for help in this situation can be excruciating (believe me, I know) but help is a necessary part of recovery and these organizations are good. Please remember that people of all genders and ages, cis men, cis women, trans, non-binary, genderqueer, old, young or in-between, literally everyone and anyone can be a victim of rape. Believe people when they tell you that they’re hurting. Trans people, elders and cis men tend to get the least support — and that’s saying something because nobody gets enough help in our (rape) culture. If you have been raped: you are valid. I see you. There are people who want to help.

This comic was largely dedicated to the rehabilitation of three women who are, or have at one time been, depicted as evil in the books. It is deeply problematic that the only way that Duggan could think of humanizing these women was to depict them as beaten and raped.

Rape does not equal character development. Rape is not shorthand for plot or for growth. In the case of Lourdes Chantel, the depicted violence was physical. Her abuse at the hands of Sebastian Shaw was used as a catalyst for one portion of Emma’s recovery and development into the hero we know her to be now. It was good to see a woman’s feminism developing. Emma’s experiences during the first Hellfire Gala crystallized her dedication both to her fellow mutants and to dismantling the Patriarchy. Cool.

I have few complaints about how the story of Lourdes and Emma was handled. It was a little sketchy that The White Queen’s telepathic services were equated with a poor understanding of sex work, but the story as a whole was a solid retcon — well executed and depicted with some stunning art.

More on that in a second.

The secondary storyline was where the majority of the problems lie. In this half of the issue, the Stepford Cuckoos ‘help’ a character ‘recover’ from the sexual abuse visited on her by her father. This character, Wilhelmina Kensington, is a torturer of animals, a matricide, and a killer of Mutants. She’s currently one of the child-sized big-bads whose actions fuel most of the action in the series. Essentially, the story posits that Wilhelmina is only evil because she was raped. This is a problem because, in this telling, she has no fucking agency.

Wilhelmina hasn’t chosen to be evil. She was Raped (!!!) and therefore she was so broken that she had no choice but to become a puppy-murdering psychopath.

I’m not saying that rape doesn’t severely fuck you up. Believe me, it does. It destroys your sense of self-worth. It can lead to PTSD. Sometimes people do weird/horrible things while they’re recovering. Sometimes they just stop showering and have lots of nightmares. Everyone is different. Rape often has a profound physical and psychological effect. But it doesn’t force you into evil.

I’m only going to say this once: the depiction of rape shown in this book is harmful to real-life survivors because is says that if you are a rape survivor your choices are 1) to be a weeping, broken mess or 2) to be fucking evil.

There. Out of my system.

Duggan was trying to do something good here. He was, I believe, legitimately trying to help. But, like going into an Asian country and dedicating a hospital to a white hero (that literally happened a few issues back) he really didn’t think this one through. Using rape as a plot device is not just the easy, go-to writing technique chosen by lazy people in order to further the story of their protagonist, or deliver an excuse for whatever is now ‘wrong’ with the victim (although this issue is very much doing that) it portrays a harmful view of people who survive rape. It also serves to remove agency from a character. It turns a person into a plot.

I guarantee you that some scared kid is reading this and thinking, ‘Holy shit, I was raped. Am I going to start killing animals?’ I remember being thirteen years old, bleeding from wounds I still don’t like to think about, and remembering all those TV shows that showed people like me. How ruined we were. I know for a fact that Wilhelmina is going to be rehabilitated by this storyline. Good. I like it when villains turn to the light. That’s sort of what the X-Men are about. But Duggan has inserted this rape into the story as the purifying fire that the character of Wilhelmina (who doesn’t exist, off the page) must endure in order to be forgiven by the readers.

Earlier, much earlier, in continuity, the character of Emma Frost endured much the same treatment. She was revealed (by a male writer) to be the survivor of sexual abuse, drug abuse, and near slavery. She needed to be given the excuse of these things for readers to forgive her for little things that another male writer made her do— like, oh, stealing the body of a Black woman and making out with her boyfriend in it (UXM #152). She couldn’t be evil and change out of her own agency. She had to be tortured, on the page, where we could see it (because you have to see proof, have to hear the whole story, in order to believe victims) by writers and artists titillating readers with her bruised face, with her tears. Then she could earn her status as a hero. When someone rescued her. When she had been tortured enough to deserve rescue.

Emma Frost had agency on the page as a villain. When she was ‘evil’ she could act. Her agency was removed, had to be removed, to make her ‘sympathetic’. She couldn’t come to her own conclusions about what she had done wrong and what she should do right and change on that basis. She had to be beaten into the dirt. Or that’s what her writers thought.

In comics, men get redemptive arcs. Women get raped. In real life, men are raped, but don’t feel like they have the right to talk about it. In real life women are raped and have to go straight back in to work. Children are raped, told it’s their fault, and made to go do their math homework. And trans people are killed. But that never shows up in the comics. Or the movies. Or the books.

I guess the idea is that presumed male readers aren’t thought capable of sympathizing with shifts in character, if that character has boobs?

In this story, Emma and her daughters took on the roles that are usually reserved for heroic men. That’s a step. That’s a huge step. But it’s a step in what is basically the same old song and dance. We need a different dance. We don’t need to add steps to the old one.

I would like to close this out by talking a little bit about the art. It’s been a long time since I was so impressed by the way that the art in a story was handled. Matteo Lolli and Klaus Janson shunted the readers back and forth through the lens of style. Lolli’s modern work was as lush and emotive as ever. Janson’s work had a era-appropriate sense of drama and panache. Rain Beredo used tone and texture to contribute (in a large way) to the sense of visual time-travel. Art-wise, the 1980’s and 2020’s were contrasted and ultimately merged in a way that was incredibly satisfying to look at. The art was worth the cover price all by itself.

For UK survivors the NHS provides counseling and instructions for help from the police. You’ll also find links to groups which will help you with the process of recovery. People of all genders are encouraged to call. Just because there are fewer links here, that doesn’t mean that it isn’t good. We’ve got the NHS. The Tories haven’t quite managed to gut it yet.

For people in the USA

The Anti-Violence Project– serves people who are LGBTQ

This book combines heavy subject matter (sometimes handled well, other times poorly) with a veritable visual feast and a little light narrative time-travel and produces a flavor that is, to say the least, incredibly complex.