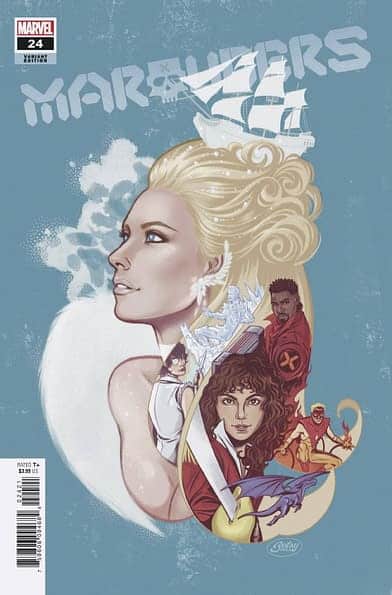 Three Krakoans walk into a bar…

Phil Noto has a remarkable gift for capturing people. His faces are textured (eye bags, dappled skin, tired lines about the mouth) but there’s a ubiquitous, classical beauty to his characters that isn’t often found in comics. Modern artists tend to be influenced by anime; Noto takes his inspiration from other sources. His women remind me of work by Pre-Raphaelite painters, Rossetti or Waterhouse. His backgrounds are a little bland, a touch undifferentiated — a shame when this is our first real glimpse of street-level Arakko — but there was enough of a rough, battered, Tatooine feel to make the settings read as lived-in and believable.

If Noto has a weakness, it’s that he seems to prefer drawing humanoid figures. Bobby’s Ice form and Emma’s diamond body came across as lumpy, gray husks, reminiscent of the Galaxy Quest gravel-monster.  Fortunately, these unfortunate images don’t detract from the splendid overall effect.

I don’t usually begin reviews by talking about the art, but I could look at Noto’s work all day, and I hardly ever get the chance to review his books.

As for the writing, Duggan’s dialogue was snappy and vivid (‘tell your mousy daughter to get a glass of milk’) and I loved the rollicking Space Opera texture of the issue. It was wonderful to get a glimpse into the daily life of the Arakkoans, and it’s unsurprising that they’d favor a rough and tumble civilization.

The frontier-town feel of the new capital city was appropriate for a place run by a culture so focused on war. The fact that this is where Shaw chooses to get a drink alone was a nice bit of characterization. It was also great to see Kate bringing some angry Sword Bisexual energy to her planetside interactions.

The baddie, Eden Rixlo, was charmingly roguish — the kind of man who would sweet talk you before stealing your car and dumping your corpse in a ditch.

Taken together, this issue served as a means of both expanding the worlds of both Krakoa and Arakko, filling them in, fleshing them out, while simultaneously laying the groundwork for future adventures. The current X-Men writers have a vast, unspoiled playground in which to set their characters. It’s absolutely wonderful to witness the expansion of this brave new world. Personally, I would be very happy if we were treated to further Space-Pirate adventures, a little bit down the line.

I just can’t wait to see what happens next.

Stunning art and a roguish plot make this book stand out, leaving competitive books firmly in the background.