My Advent on Earth 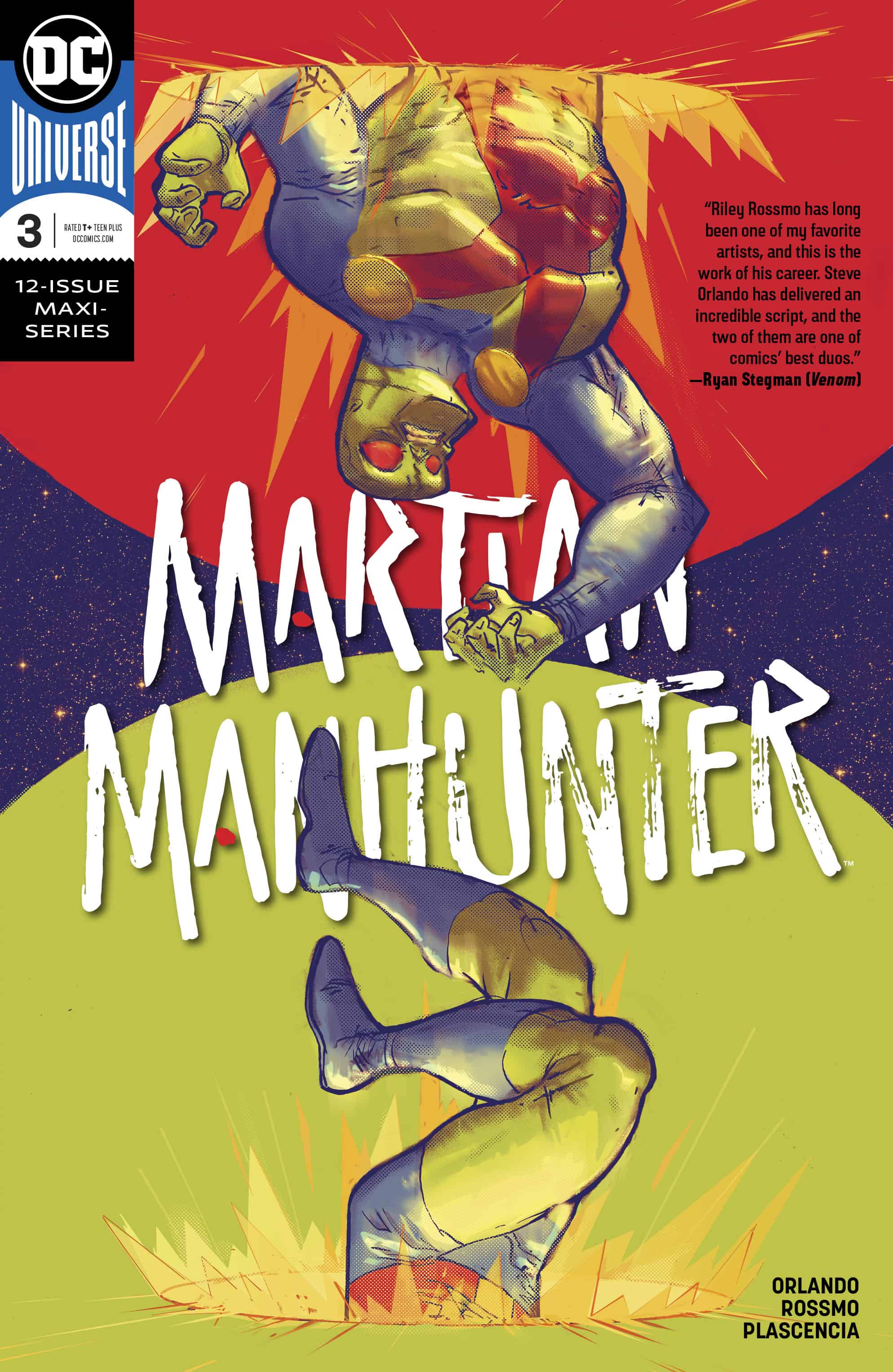 You can't keep a good Martian down... Detective Diane Meade is more than a little surprised to learn that the bullets she just put in the thing she thought was her partner, John Jones, not only had any effect - they didn't even strike real organs! 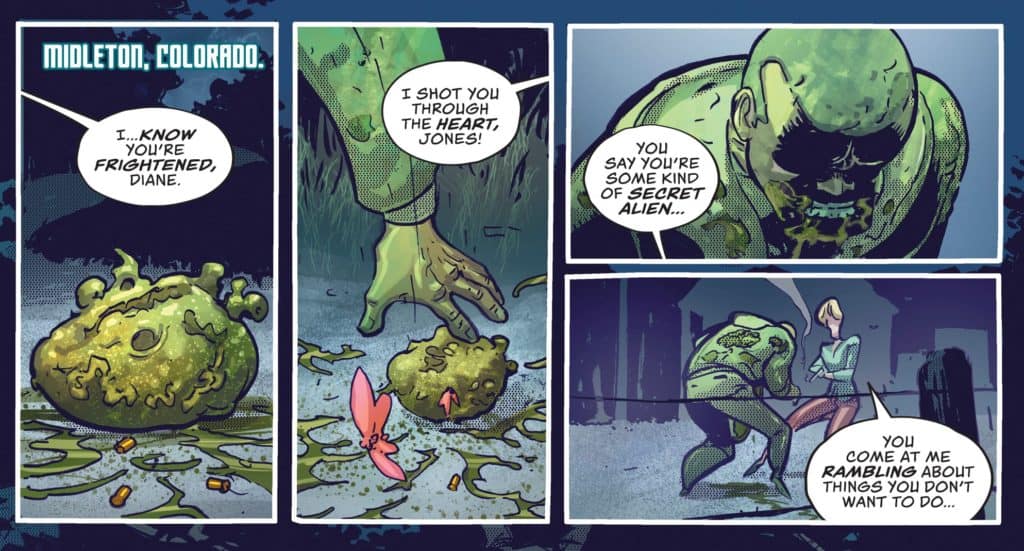 Diane reluctantly helps J'onn to safety so he can recover, and the story of how he came to Earth begins to unfold. 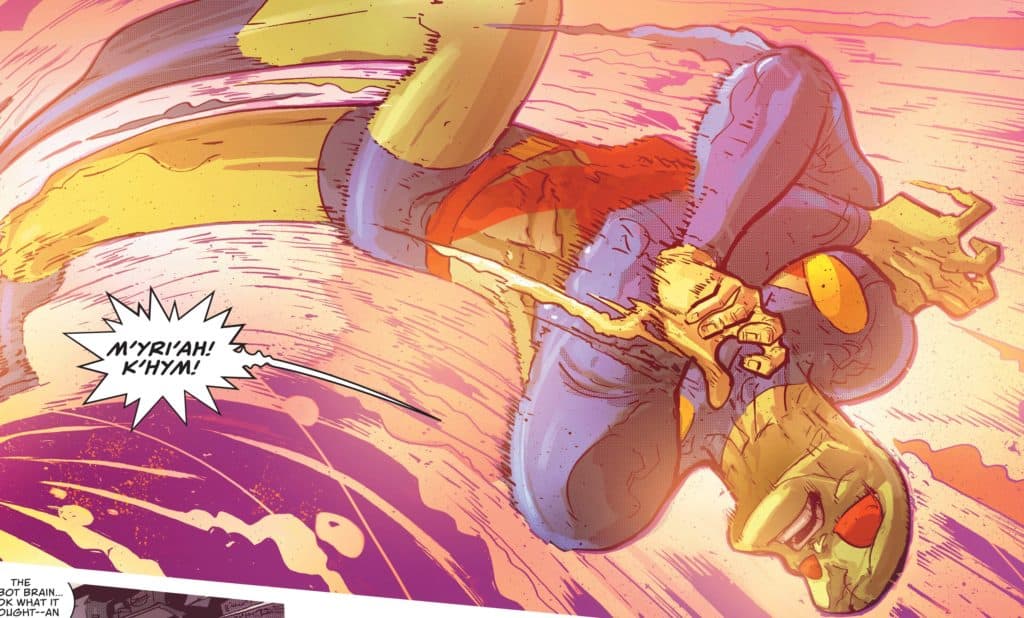 Upon his sudden and unexpected arrival on Earth, J'onn realizes he was brought forward not just to a new world, but forward in time as well. Gone are the cavemen he thought still populated Earth; in their place is a modern world he struggles to understand. Existing as an unseen wraith, he explores mankind's societies and begins to recognize a reflection of Mars among humanity. One night, he is drawn to a fellow peacekeeper in trouble, and arrives just in time to witness Detective John Jones meet his brutal and bloody end. Outraged, J'onn emerges from the shadows and enacts revenge! 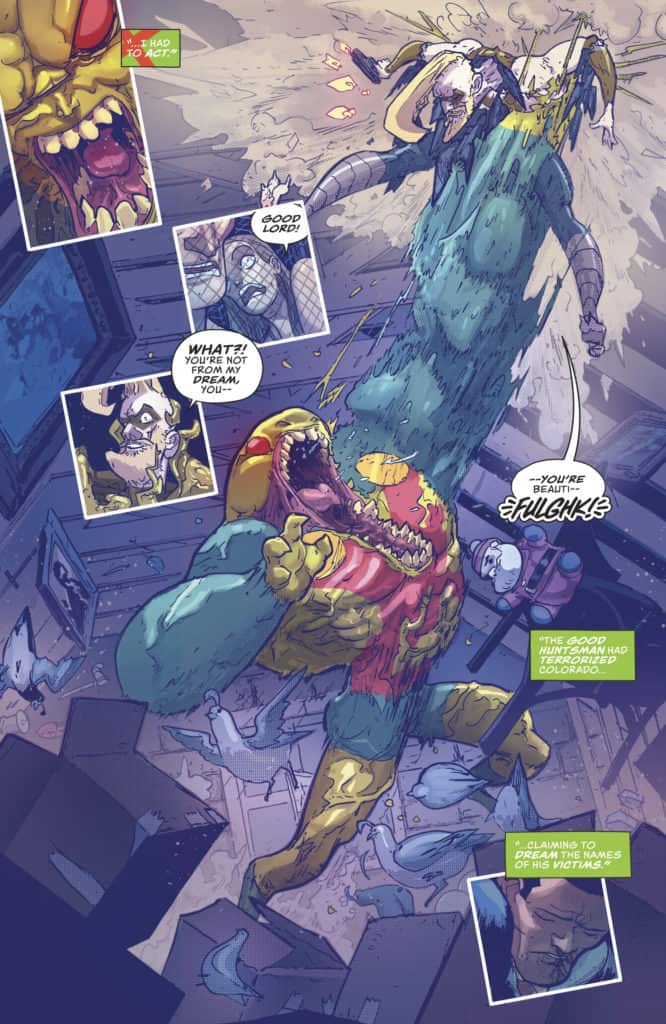 Compelled by Jones' death, J'onn assumes his life in order to honor his memory. Jones is given a grave, and J'onn begins his life as an Earthman disguised.

After a full-throttle first two issues that worked overtime to expand J’onn J’onzz’ life and world on Mars, writer Steve Orlando slows things down this chapter and narrows his focus to explore how he adapted to Earth in the first place. It’s a pretty straightforward narrative; we really aren’t told anything about Saul Erdel’s experiment that brought J’onn here on the first place, or what he was trying to accomplish. Instead Orlando focuses on J’onn’s reaction to the experience on the first place. It’s a ballsy move, because it expects the reader to fill in the blanks of the story, but could also be interpreted as pandering to the notion that seasoned readers already know J’onn’s tale. However, very little of this story thus far has been spoon-fed, so I’m willing to assume Orlando’s intent is the former. 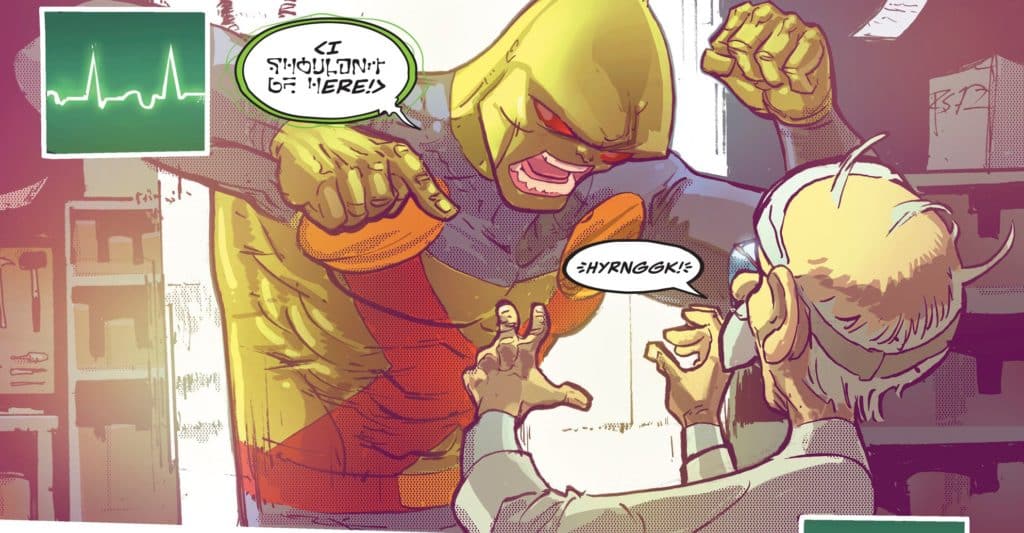 In a more relatively quiet issue than previous installments, Orlando still finds plenty to keep artist Riley Rossmo busy. There isn’t a single panel that doesn’t invite more-than-casual inspection. His pencils, coupled by the stunning colors of Ivan Plascencia, make this book an utterly unique standout versus every other book on the shelves. There are only a handful of artists who can definitively say they’ve developed a style that is 100% their own, instantly recognizable at a glance – but Rossmo is on that list. He’s a surefire inheritor to Chris Bachalo’s singular look, and I expect his career continue for just as long as his spiritual predecessor’s. 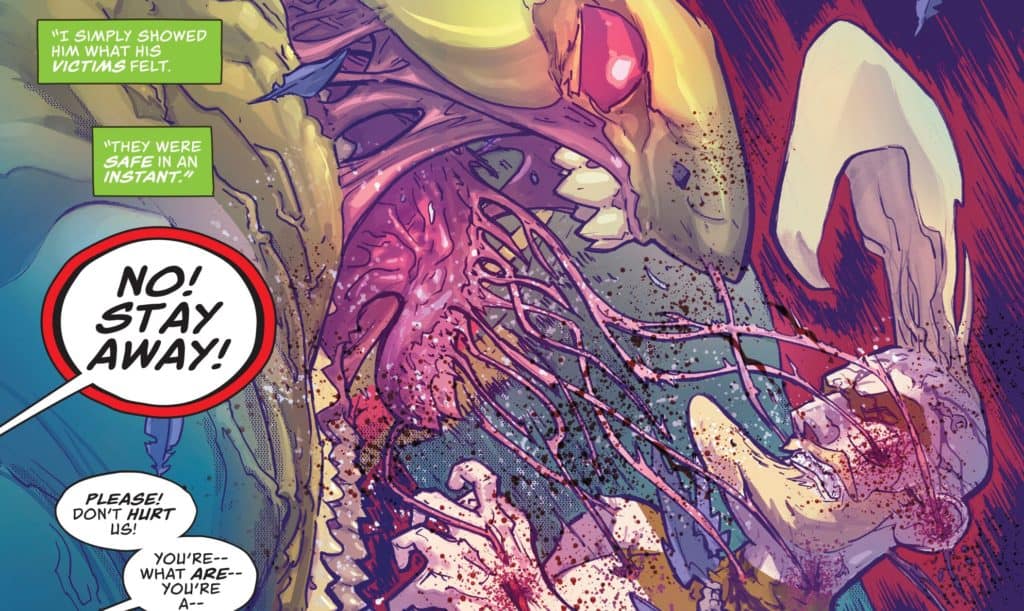 I do remain somewhat less convinced in the story’s second plot, which involves J’onn relaying his tale to Diane Meade, and her helping him to recover from his injuries (eggs are really good for you!). Though skeptical, she seems a little too quick to come to the aid of someone that a) clearly isn’t human, b) is wearing her dead partner’s face, and c) ah yes, she just found out that her partner is actually dead and has been so for quite awhile now. A freak-out would be completely justified. 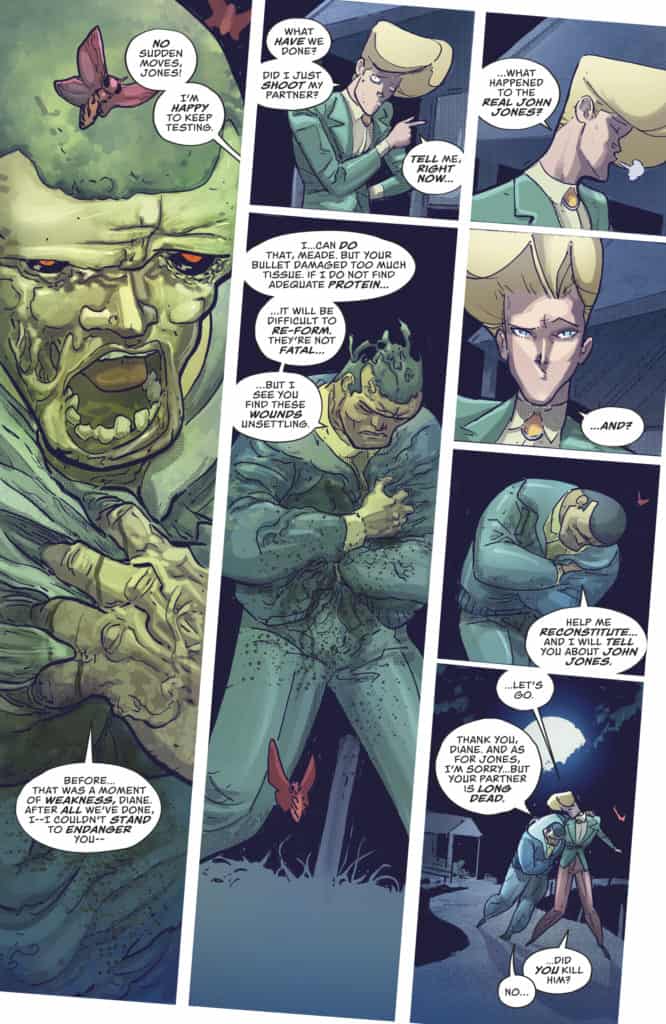 The problem is, we don’t know enough about Meade to know if her non-response is in line with her character. (Sorry, nervous smoking does not a freak-out make.) So far, she hasn’t had any agency of her own in this series other than to react to J’onn. She clearly has an integral role to play – I just want her to be fleshed out some more, and her response toward the end of the issue when J’onn reveals he deliberately mimicked Meade’s bond with Jones gives a pretty big clue as to where her part in the tale is headed. 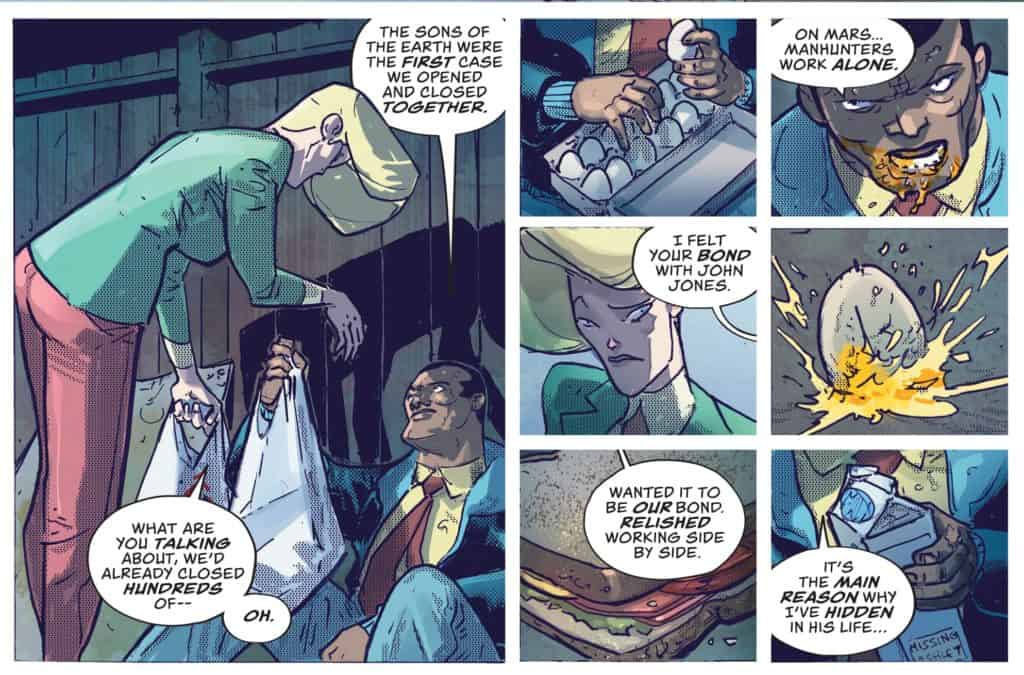 Will she work with the man wearing her dead partner’s face, or will she spread his tale near and far?

Steve Orlando, Riley Rossmo, and Ivan Plascencia continue their journey into the life and times of J'onn J'onzz, the Martian Manhunter. It's the story of an alien, but speaks to the humanity in all of us. I cannot recommend this book highly enough!