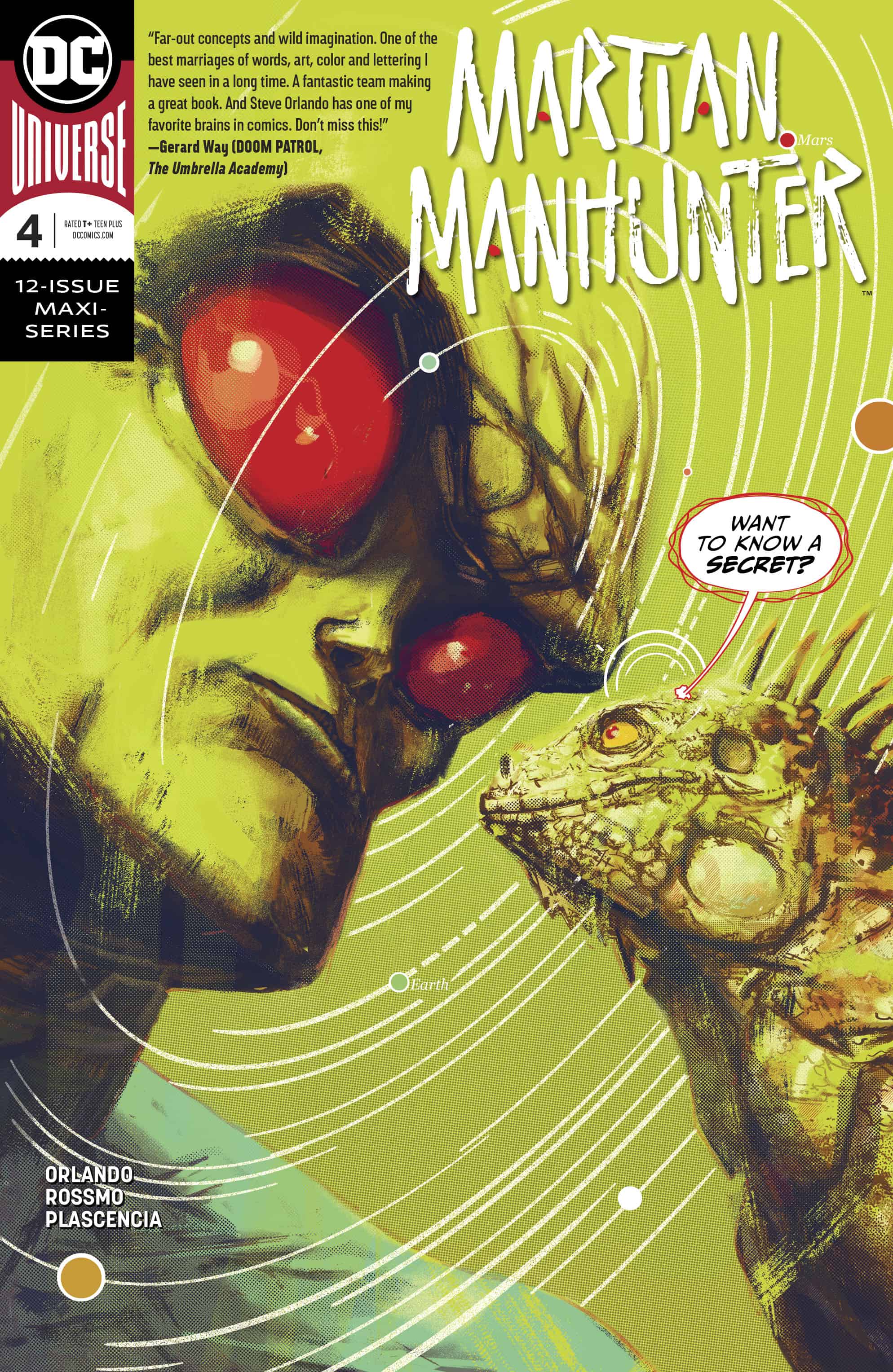 In the past on Mars, an increasingly desperate J'onn J'onzz tries to broker a deal with his criminal conspirators to protect his wife and daughter from the ever-increasing threat of the psychic virus H'ronmeer's Curse... 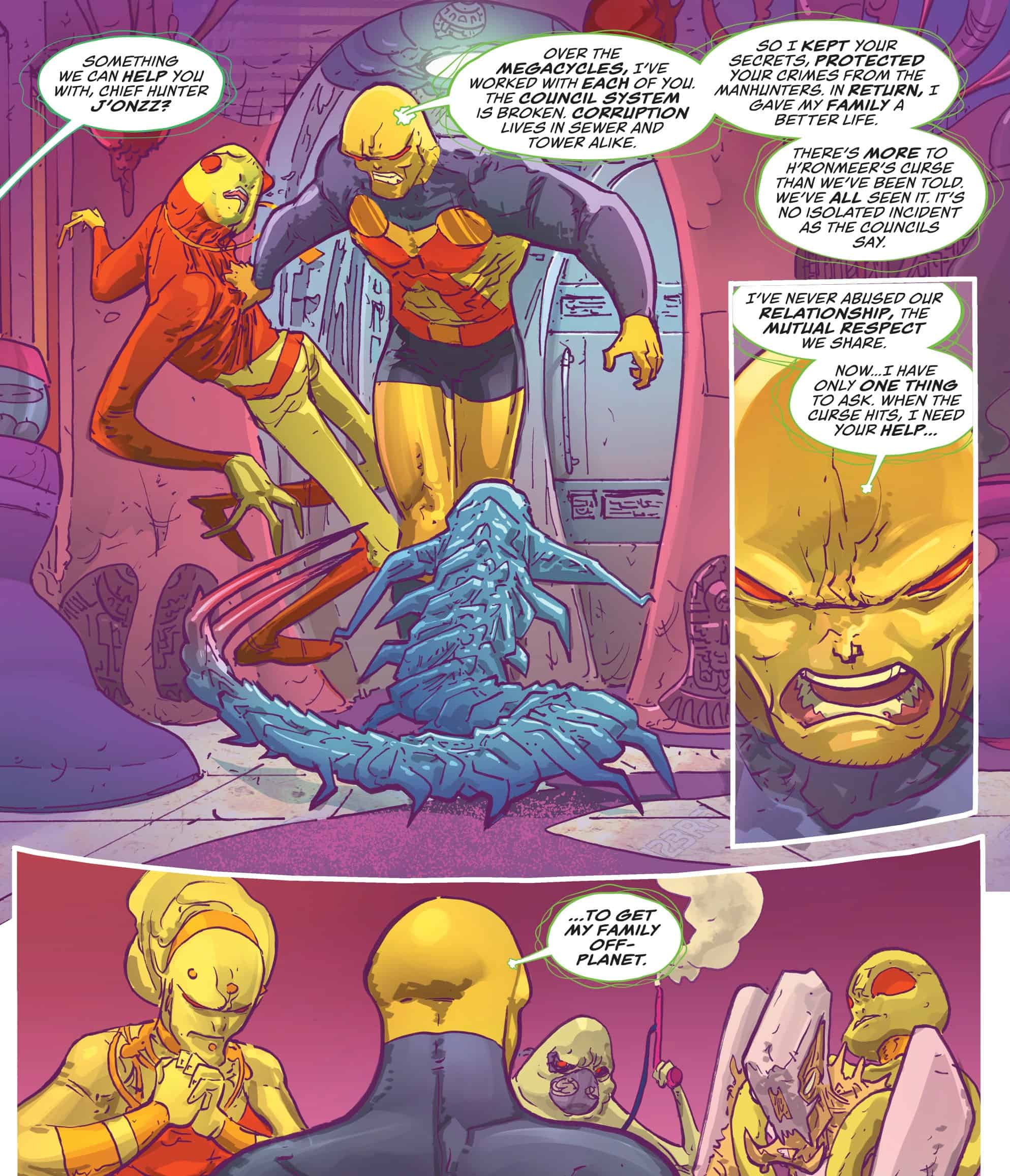 ...while at home, J'onn's wife M'yri'ah suspects her husband is keeping secrets from her (which he is), putting a strain on their relationship. J'onn blames the threat of H'ronmeer's curse for why he won't fully psychically bond with her, but she remains disbelieving. 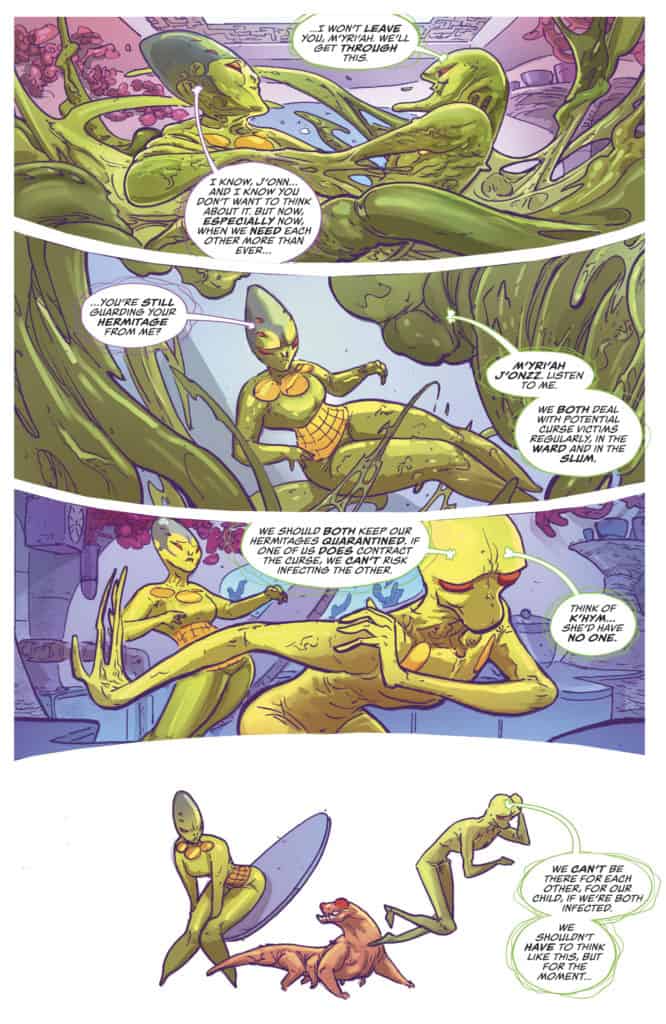 In the present (and on Earth), J'onn struggles with the fallout from his true identity being revealed to his partner Diane Meade. 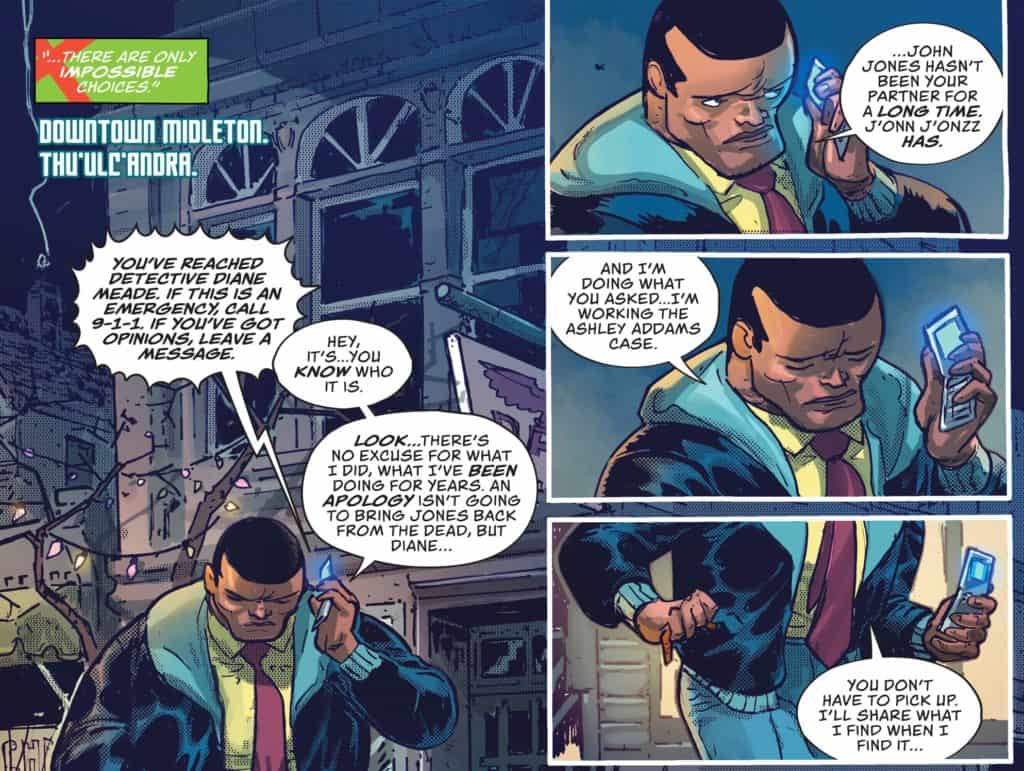 J'onn, for all his troubles though, is still trying to find missing local teenager Ashley Addams. He reaches out with his "weird mind" and finds the only witness to her abduction: her pet iguana! 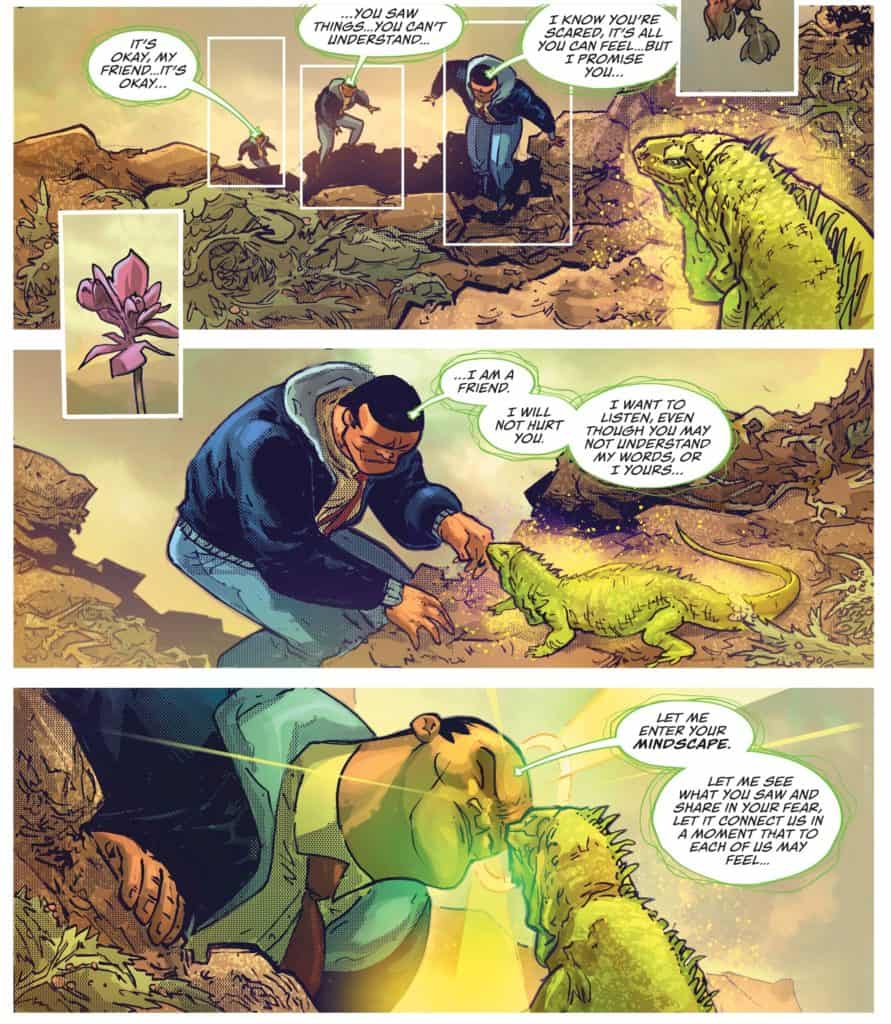 Psychically connecting to the small creature, whose perceptions are dictated wholly by fear, J'onn manages to witness the attack - plus the murder of Ashley's parents - but can't discern the face of her kidnapper. However, Meade may be M.I.A. from J'onn, but she's still running down leads of her own on the case. This leads her to an out-of-town lowlife known to associate with human traffickers.

Before long, J'onn meets the alleged kidnapper in prison... but he's far more than he seems...

As the first act of Steve Orlando, Riley Rossmo, and Ivan Plascencia’s masterful re-imagining of the Martian Manhunter’s origin comes to a close, the plot thickens and all the players make fateful decisions that will determine their courses throughout the remainder of the series. All in all from a storytelling perspective, a fairly routine set-up.

Ah, but it’s the details that make this issue stand out. I’ve raved before about Orlando’s insanely detailed and well-thought out vision of Mars, its society, its customs, and its people, and this issue continues in that mesmerizing direction, delving into the politics behind the security council’s decision to cover up H’ronmeer’s Curse. The council privately states they won’t address the Curse until they have a cure but publicly deny its threat and/or downplay it completely. This sets M’yri’ah up to potentially act in defiance of the council in future installments and perhaps in doing so, hasten Mars’ own doom. 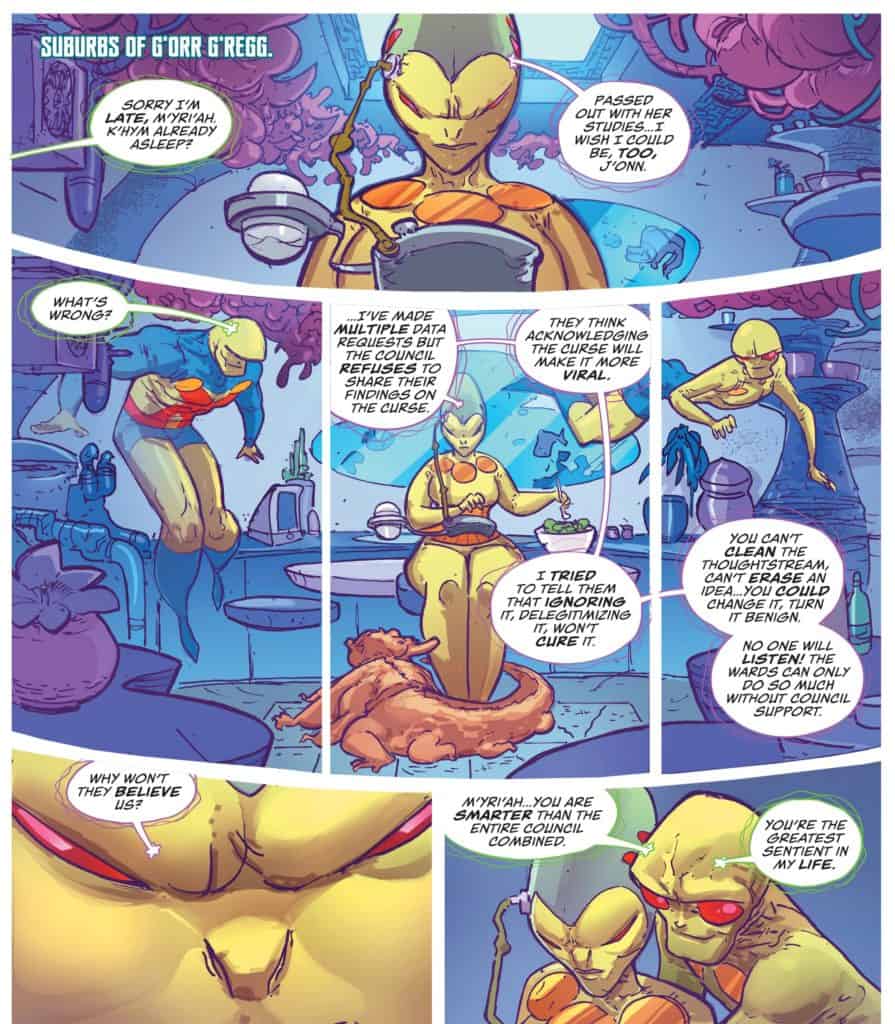 The psychic virus itself is another novel idea: it transmits via mental connection, infecting the host and eventually causing them to immolate. Historically, J’onn has always had a weakness to flame (although it has varied as to whether it was physical or psychosomatic in nature); H’ronmeer’s Curse gives an origin to that weakness in a way that is truly terrifying. 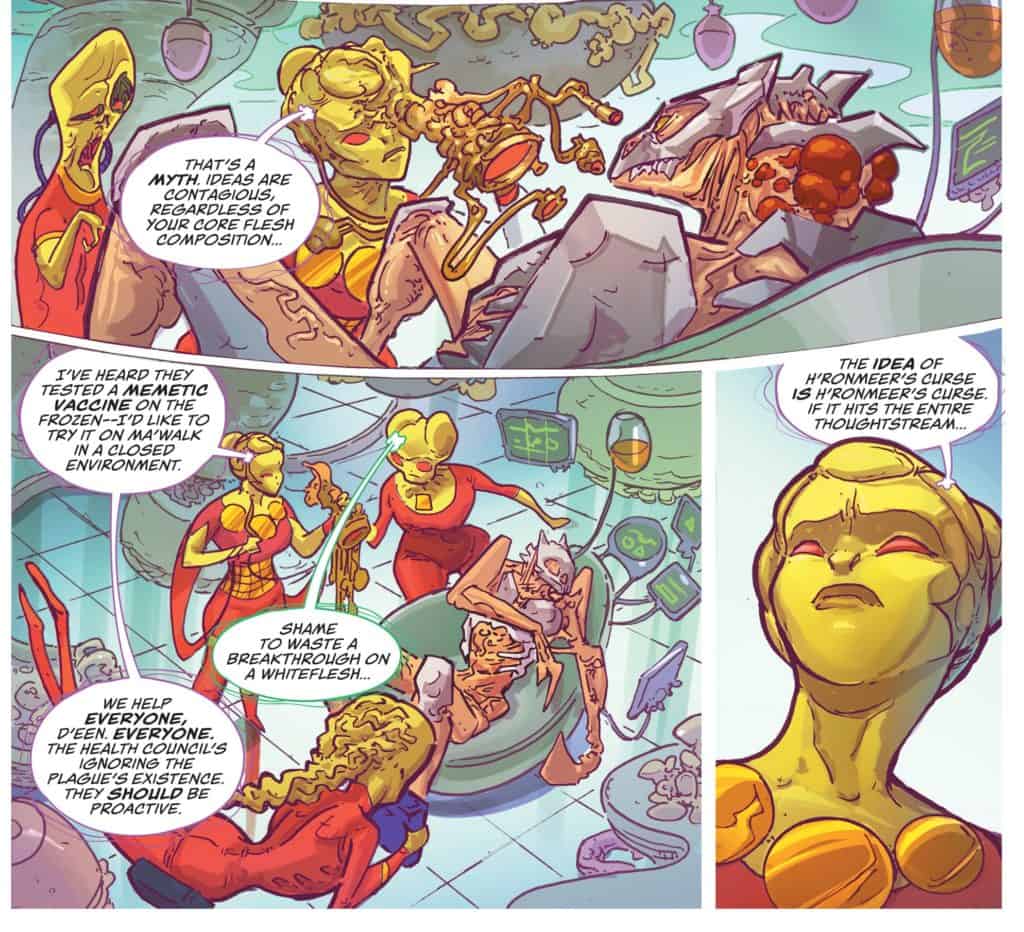 On Earth, Orlando also treats us to an expanded demonstration of J’onn’s psychic abilities. When he mind-links with the iguana, it’s not as though the two of them have a conversation. Instead, he must interpret the small creature’s memory through its own fight-or-flight-based perceptions, giving him a unique yet limited insight to the events of Ashley Addams’ kidnapping. To my knowledge, this has never been done before in a Martian Manhunter story. 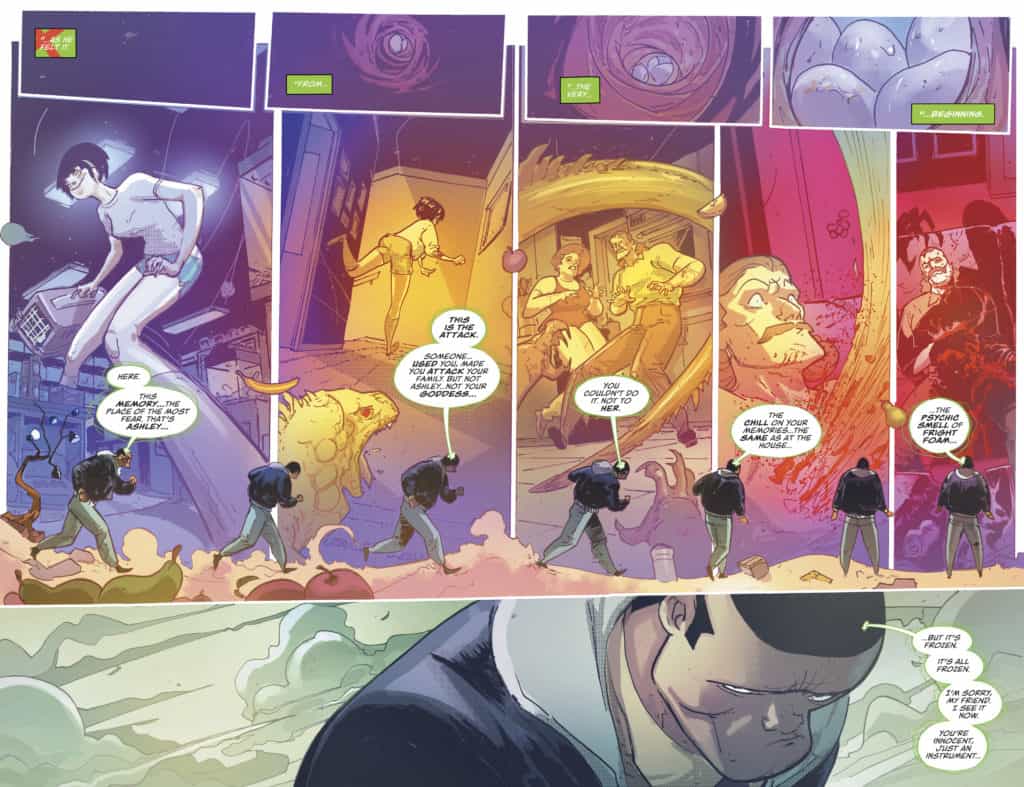 These details would ultimately be hollow in their innovation, though, if it weren’t for the strong characterization of J’onn. At his core, he is a man alone on Earth, one who lost everything and is desperate to rekindle some semblance of relationship – even if it’s by imitating a dead man. We feel his shame after this ruse is revealed, and even though we know he was wrong, he remains a sympathetic figure nonetheless. 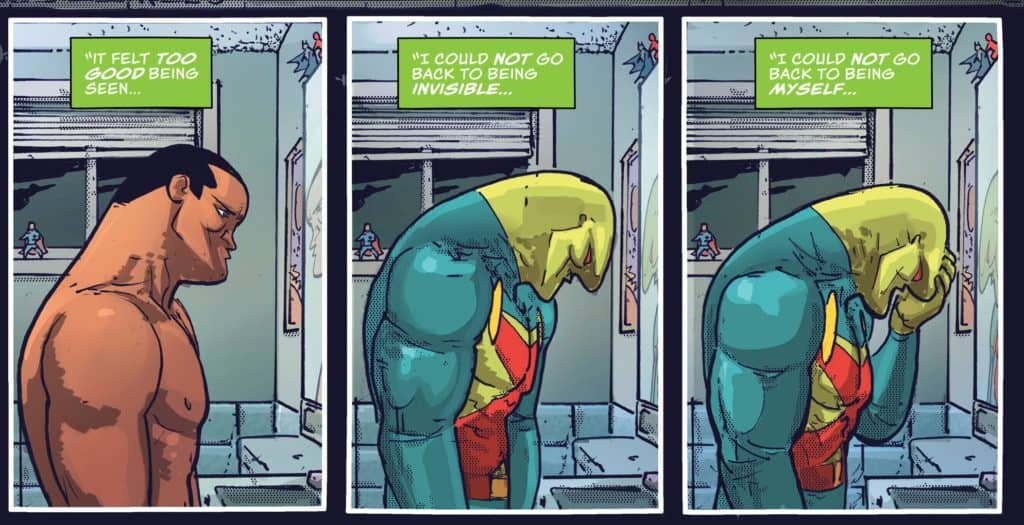 The same holds true for J’onn’s life on Mars. We know what his family’s – and indeed, his entire race’s – fate will ultimately be, which makes his scenes of domestic bliss all the more heartbreaking. Although just four issues in, Orlando conveys a real and honest sense of J’onn and M’ryi’ah’s relationship. When he recoils from sex with her for fear of possibly transmitting H’ronmeer’s Curse and leaving their daughter an orphan, she believes the true reason is that he’s hiding secrets from her. The heartbreaking realization that J’onn may never get the chance to set his marriage right before all is said and done is powerful, and makes his eventual loss even more potent.

Finally, the glue that holds this all together are the phenomenal art duo of Riley Rossmo and Ivan Plascencia. Every page they draw is completely unique, vibrant and energetic. They bring a visual sensibility that is absent from any other comic out there!

Although a relatively quiet issue, Martian Manhunter continues to prove itself as one of the most uniquely human comics on the shelf today. It may not be drawing the raving hype and talk of Eisner shoo-in that DC's Mister Miracle did, but it certainly belongs in the same conversation as a game-changing book that is a cut above anything else out there. Sadly, April will be a skip month for the book, but rest assured I can't wait for the next installment in May!