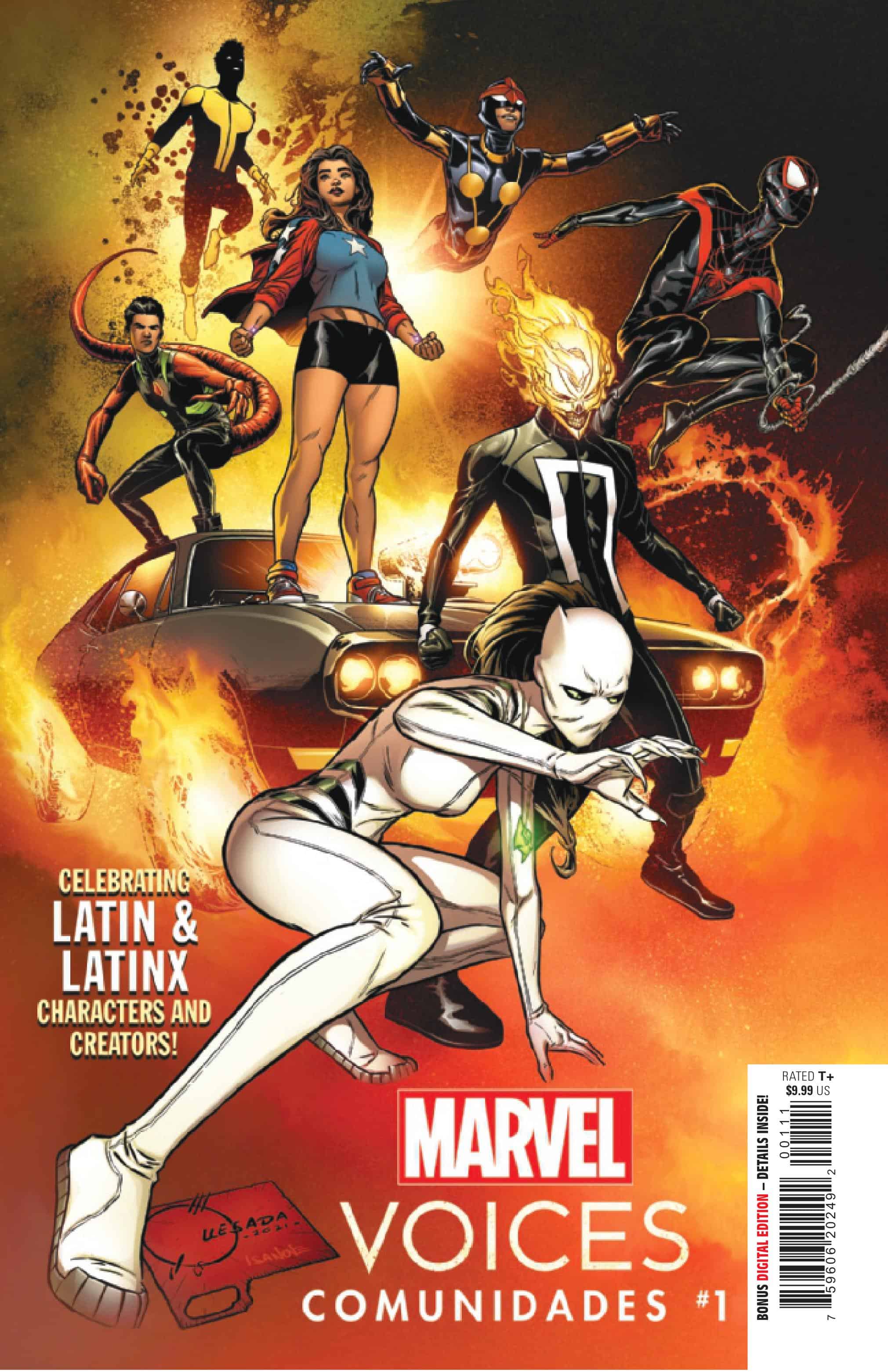 COME JOIN THE FESTIVITIES AS MARVEL CELEBRATES THE MIGHTY LATINX HEROES AND CREATORS FROM ALL CORNERS OF THE MARVEL UNIVERSE!
Spider-Man! White Tiger! Ghost Rider! And so many more heroes get their moment in the sun as new and fan-favorite creators continue to expand the world outside your window in Marvel Voices: Comunidades #1! Featuring an introduction by renowned scholar Frederick Luis Aldama! PLUS, an all-new hero takes the stage in a whirlwind adventure you won’t want to miss!

Marvel Voices: Comunidades #1 gives Latinx creators the opportunity to tell stories that take the Latinx experience and apply it to the world of Marvel. While each writer approaches their stories from different perspectives, common themes of community, identity, and history and culture can be found.

A connective thread throughout the anthology are the precise, creative letters of Ariana Maher, which manage to both create a coherent framework for the reader’s comfort and include coloring, playfulness with shaping and balloons, and vibrant emotions out of every character’s dialogue.

The anthology starts with “Just as Strange as You” by Terry Blas, Julius Ohta and Erick Arciniega. In this story, with Ohta’s lines showcasing a very modern, young superhero visual style that grabs the eyes immediately, Blas has their original character from the miniseries Reptil join the ranks of Strange Academy. Eva’s tour guide comes in the form of German Aguilar. While the story provides the opportunity for two side characters to be further developed, it also serves to further emphasize how connected Eva’s power is to her identity. The very language of her magic is that of her culture, and that is further reinforced by the vibrant visuals and coloring surrounding it. 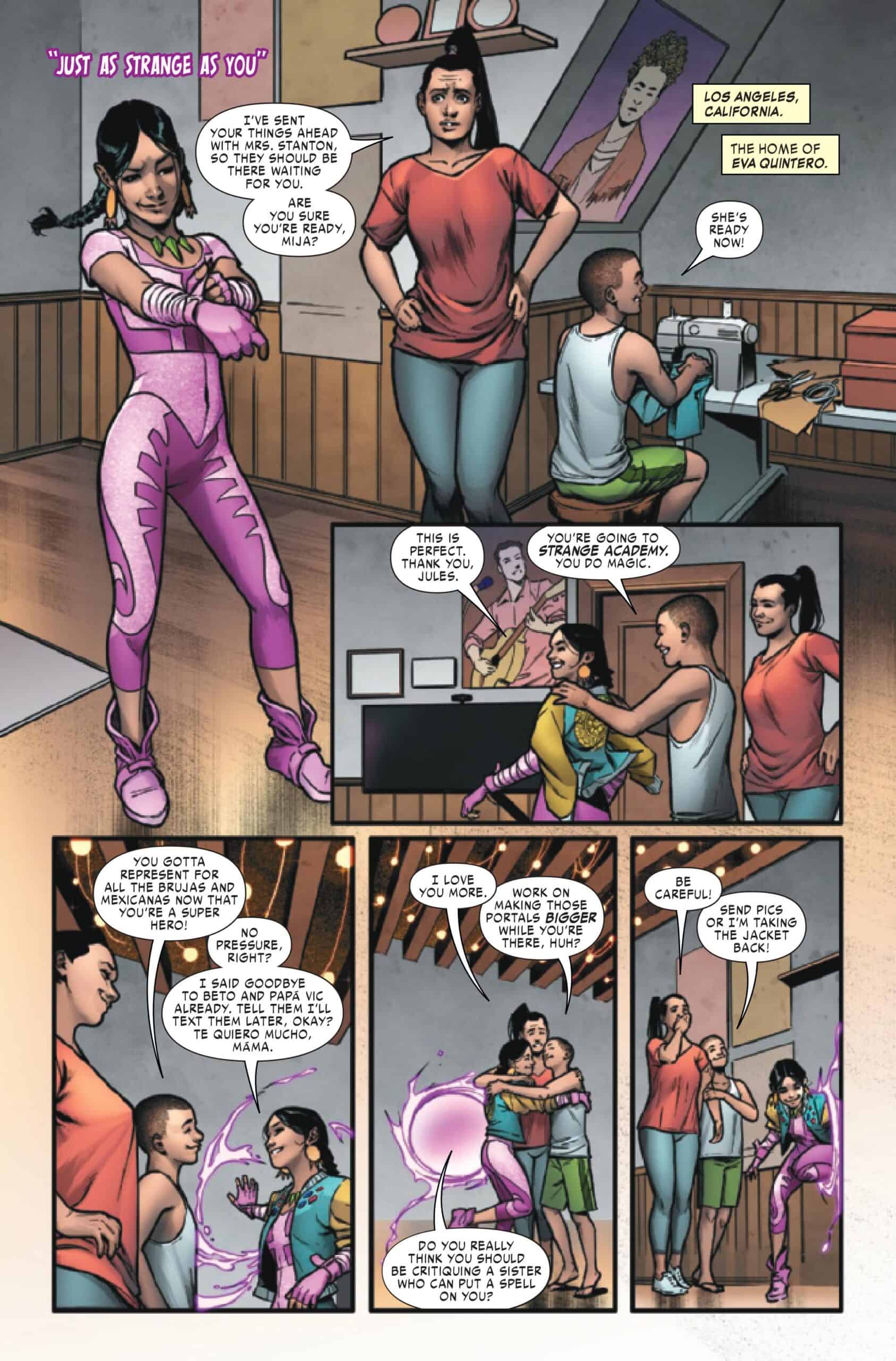 In “Operation: New World”, Desiree Proctor and Erica Harrel manage to apply the concept of Krakoa from the current X-Line and apply the core concept more definitively than most of the full-length comics. By using Risque, the daughter of a Cuban immigrant and a member of the Seminole tribe, and the near Manifest Destiny galactic policy of Krakoa following the Hellfire Gala, Proctor has created the chance for choice and agency. In this way, Risque is able to show that Krakoa should not be making the mistakes that humans have made on Earth. More so, it is the experience of her heritage that she refuses to commit the same crime. Said message arrives further by the sci-fi, somber and high-stakes visuals of Paco Medina and Federico Blee. 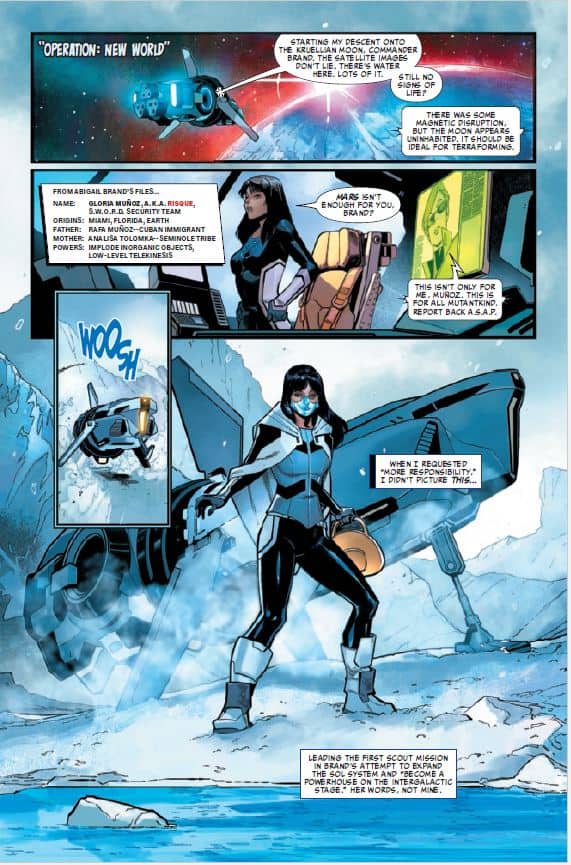 “Fate and the Sorcerer Supreme” brings themes of environmentalism and indigenous resistance to a culture of waste and power-for-power through enchanting apocalyptical visuals and the compelling dialogue (presented as a clash but soon turning into a magical conversation) between Nina the Conjuror and Brazilian spiritual being Anhangá. While the conflict Juan Ponce and Wilton Santos pose goes into incredibly complex territories, the cultural and historical message of ecological resistance by Brazilian indigenous groups touches deeply, especially as it’s shown against a culture so dismissive of the Earth’s well-being as modern capitalism, which isn’t literally present in the story but clearly referenced as the underlying conflict.

Throughout the anthology there are also one page stories based on preparation for a superhero Latinx potluck. “Mom’s Cooking” by Edgar Delgado and Francisco Herrera, “Corn husks” by Nico Leon and Felipe Sobreiro, “Hands” by Karla Pachecco, Vanesa R Del Rey, and Felipe Sobriero, and “Shark Hunt” by Leonardo Romero each show a different hero trying to bring authentic food from their respective cultures and the challenges they face. German Aguila is far from home and trying to remain close to his culture. Reptil is desperate to connect to his late mother through cooking. Ghost Rider passes down culture and life lessons by cooking. All while Shark Girl lacks the ability to cook but is still seeking connectivity and authenticity through food. Each story highlights a different perspective, yet still focuses on the importance of food in culture.

The stories in Marvel Voices Comunidades #1 utilizes Latinx characters of various different backgrounds to look at how history and culture interact with each other to form complex characters and tell new narratives.