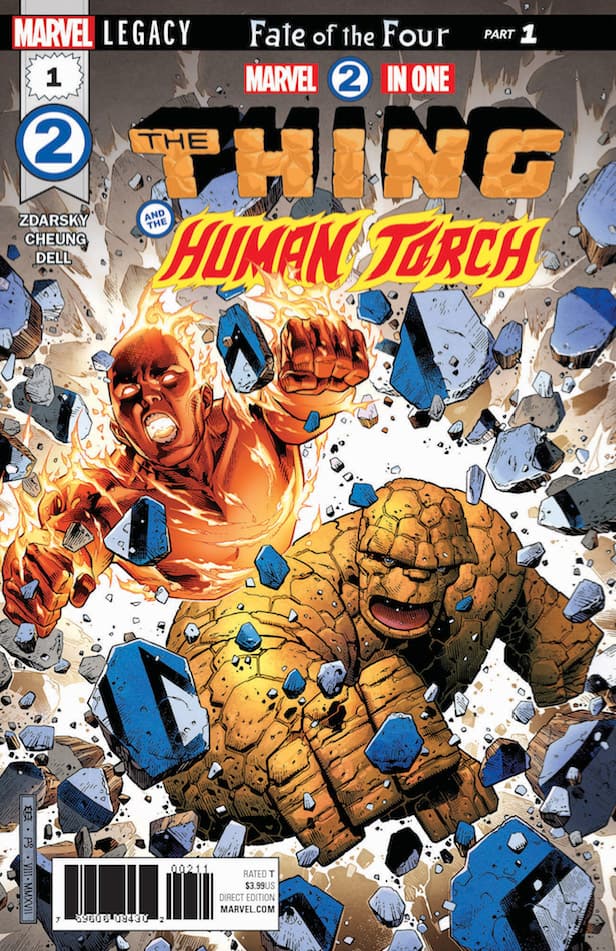 The Thing sets out for answers to the fate of Mr. Fantastic and the Invisible Woman. Only the Human Torch can help him find them—but the Torch faces a dire fate of his own. And what is Dr. Doom up to this time?

The Fantastic Four are the original Marvel super-heroes and founders of the Marvel Universe, without whom none of the others would exist. There have been many “End of the Fantastic Four” stories, but the conclusion of the 2015-2016 Secret Wars miniseries has proven to be the most lasting one. Only half of the Fantastic Four—Ben Grimm, the Thing and Johnny Storm, the Human Torch—remained in the wake of Mr. Fantastic’s “final” showdown with Dr. Doom. The reconstructed Marvel Universe has proceeded without Dr. and Mrs. Richards. Ben went jaunting through space with the Guardians of the Galaxy while Johnny stayed with the Inhumans. (And became Medusa’s boy toy, an ironic idea if you know the history of these characters.) The world, including Ben and Johnny, has assumed that Reed and Sue Richards are gone forever—but it may not be so.

Marvel 2-in-One is a revival of the old Marvel Two-In-One series that starred the Thing and a round robin of other Marvel super-heroes. This new series kicks off with a quest called “The Fate of the Four!” 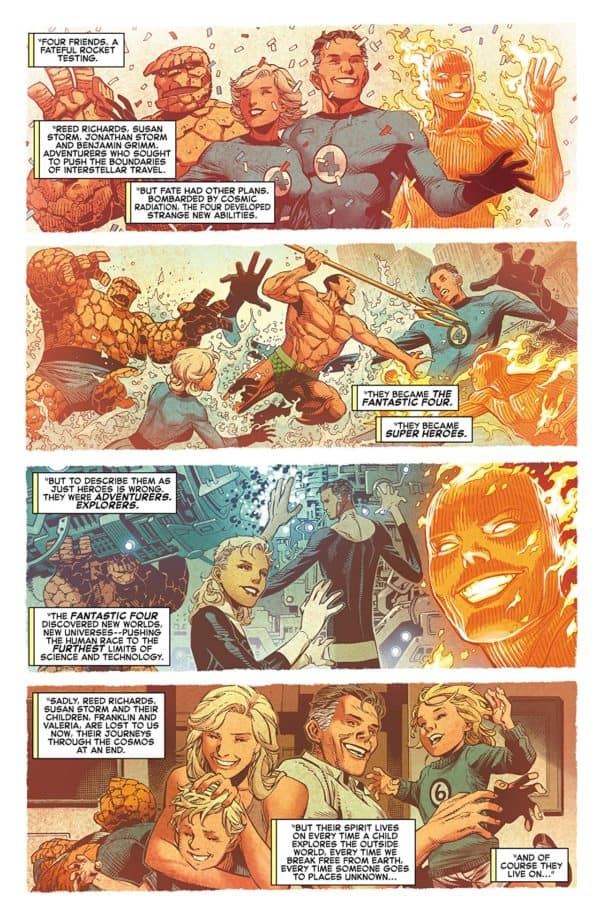 Ben Grimm and Johnny Storm have gone on with their lives and adventures after the loss of Reed and Sue Richards. Ben has borne up under the sorrow as best he could, but keeps harking back to a moment in the upheaval of universes in the Secret Wars when Sue made him promise to take care of Franklin and Val (the Richards kids, missing along with their parents)—and Johnny, who “looks up to you, more than you know!” Meanwhile, Johnny has become morose and despondent, embarking on what appears on the surface to be a reckless, thrill-seeking life, drifting from one dangerous stunt to another. Something’s got to give—and it does, when Spider-Man appears at an awards ceremony in honor of the FF and clues in the Thing as to what’s happening to the Torch. He gives Ben the keys to a storage space where he’s been keeping all of the Fantastic Four’s gear. (Over in his own book, Spider-Man became a technology mogul, bought the Baxter Building, then went bankrupt and had to put all of the FF’s paraphernalia into a warehouse.) Ben takes a Fantasticar and goes to the storage space—where who should be waiting for him but Dr. Doom! 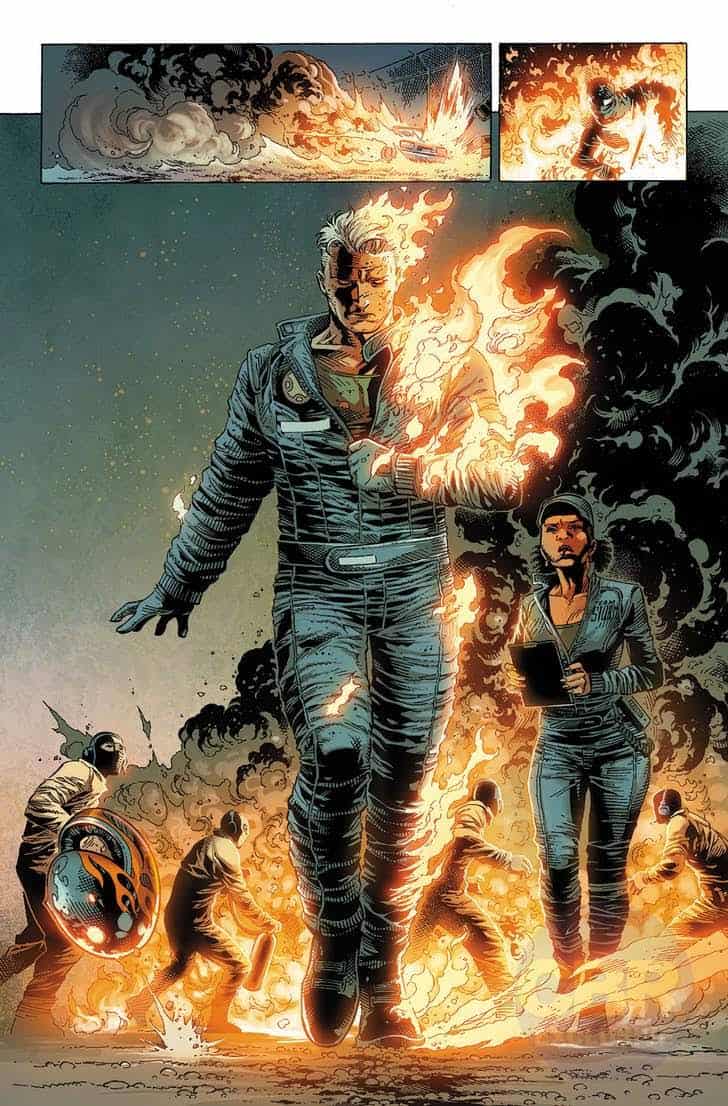 Doom—now tricked out in a sleek-looking new armor reflecting his supposed turn from evil to good—went rifling through the Baxter Building and found a data storage device whose contents were meant to be viewed by Ben in the event of Reed’s death. Out of generosity—he’s a good guy now, wink-wink, remember?—he hands over the device to Ben and departs after an obligatory minor scuffle. Ben activates the device and a hologram of Reed appears, urging Ben and Johnny, who both still need lives of adventure even if there is no FF—to continue exploring and discovering. Reed has hidden a device called “the Multisect” in the place where the FF had their first adventure. It is “a nexus for seemingly infinite universes” that “cannot fall into the wrong hands.” Ah yes, here’s our McGuffin for the story. Ben and Johnny must find the Multisect and keep it safe. So begins the hero’s journey. 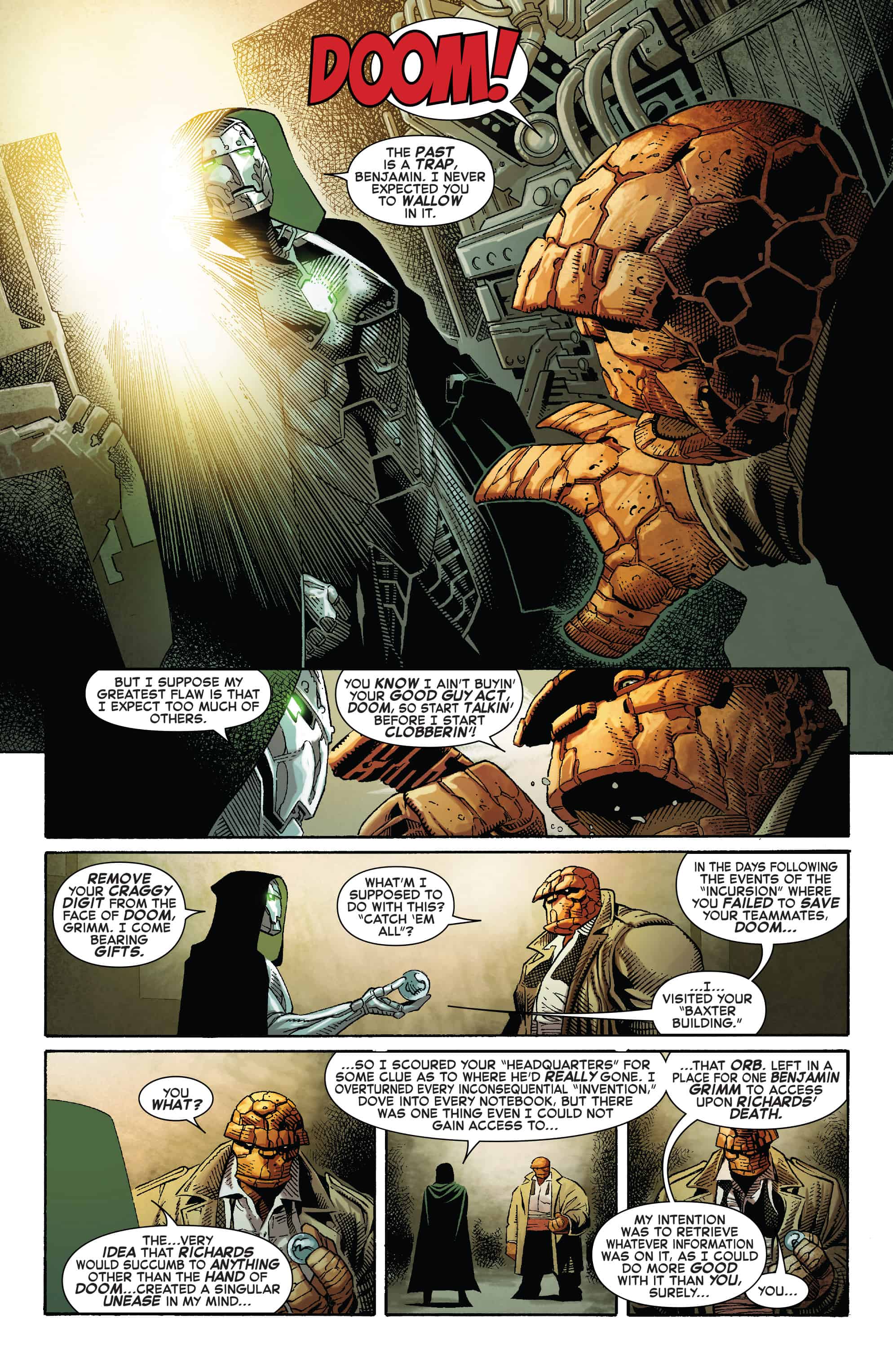 But in every hero’s journey is a complication, and this one is no exception. When the Thing finds the Torch, Johnny appears to be playing “chicken” by hurling himself into the upper atmosphere where his flame goes out and falling back to Earth, reigniting in the nick of time. In fact, Johnny has been testing his powers, which are fading, which doubles his grief: for if his powers extinguish themselves completely and his sister Sue, Reed, and his nephew and niece are all gone, he’ll have nothing left. Johnny pours out his rage and despair to Ben, who suspects after his encounter with Doom that Reed and the family may still live. While Johnny takes in the shock of this news, Doom secretly monitors the two of them, knowing they will lead him to Reed’s Multisect, for which Doom naturally has plans. But remember—nudge, nudge—Doom isn’t a villain anymore. Sure he’s not… 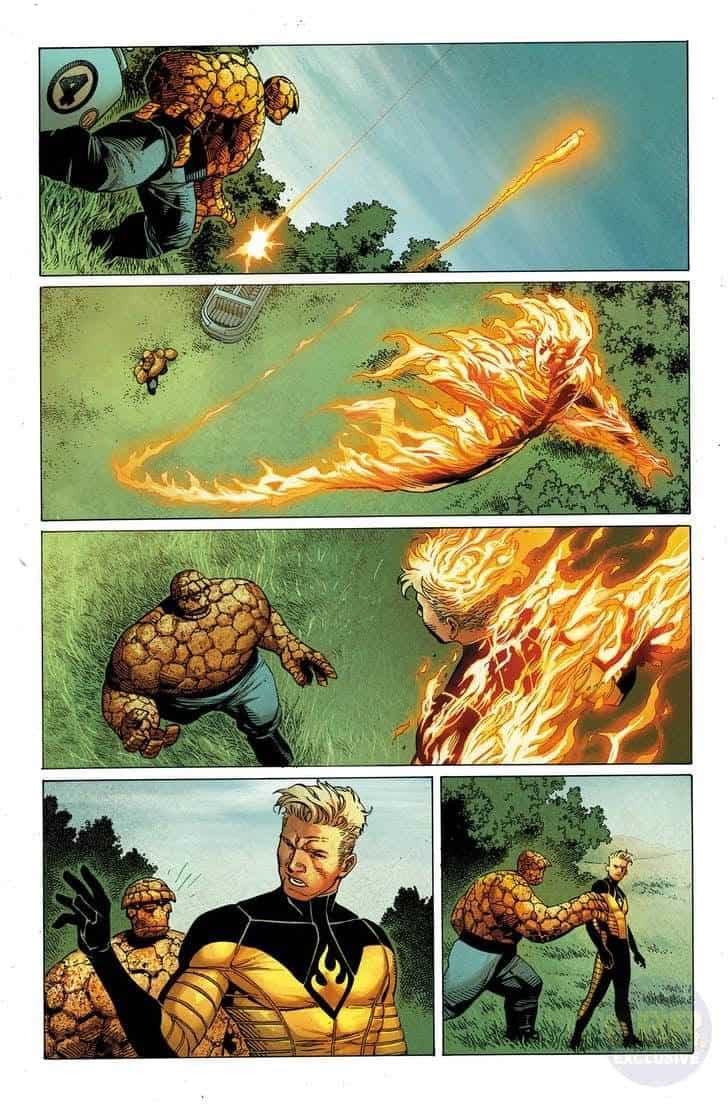 Overall, it’s a pretty good story, worthy of the Fantastic Four “legacy” (to borrow Marvel’s favorite word these days.) There are some inside jokes on the first page that you’ll catch if you’re paying good attention. Most of this is set-up for big battles and adventures to come; the only “action” except for the aforementioned Thing/Doom scuffle is a one-page smackdown between the Thing and Piledriver (from the Wrecking Crew) that precedes the fateful exchange between Benjy and the Webhead. Ben’s suspicion that Reed and Sue are not really dead reminds us of the times in the Fantastic Four book when Reed was supposedly “dead” and Sue refused to believe it, and was proven right. The one sour note is the attrition of Johnny’s powers. The exit storyline for the FF book was partly about Johnny losing, then recovering, his powers. Did we really have to have this again so soon? One hopes that succeeding issues will show there’s a point and a purpose to repeating this story. At the moment it seems like another layer of conflict over an already tense, mysterious, and soon to be dangerous situation.

There’s a preview of next issue’s cover, and it’s yet another revisiting of one of the most repeated images in comic books. It’s a very good repeat, mind you, but repetitions of this image seem to have become inevitable. Well, it just speaks to the power of the Fantastic Four and their importance to comics in general and Marvel in particular—which has too often been lost, forgotten or dismissed.

The issue closes with a three-page backup feature about the origin of the Fantastic Four. It’s written by Robbie Thompson, penciled by Greg Land, inked by Jay Leisten, and colored by Frank D’Armata. The backup is nice-looking stuff, but one part of it stands out very deliberately: the first panel on the second page. “Back in the day,” they used to have Sue hang back behind the guys because she was the woman. Today they like to have her front and center, and this panel is, in fact, a shot of Sue with the guys as background figures. You see, today they like to have Sue bring up the front because—wink, nudge—she’s the woman, and look what she’s got up there! Greg Land’s art is certainly nice to look at, and he makes sure that what Sue has got up there appeals most strongly to the core demographic of the audience. Can you say “gratuitous,” boys and girls? I knew you could. 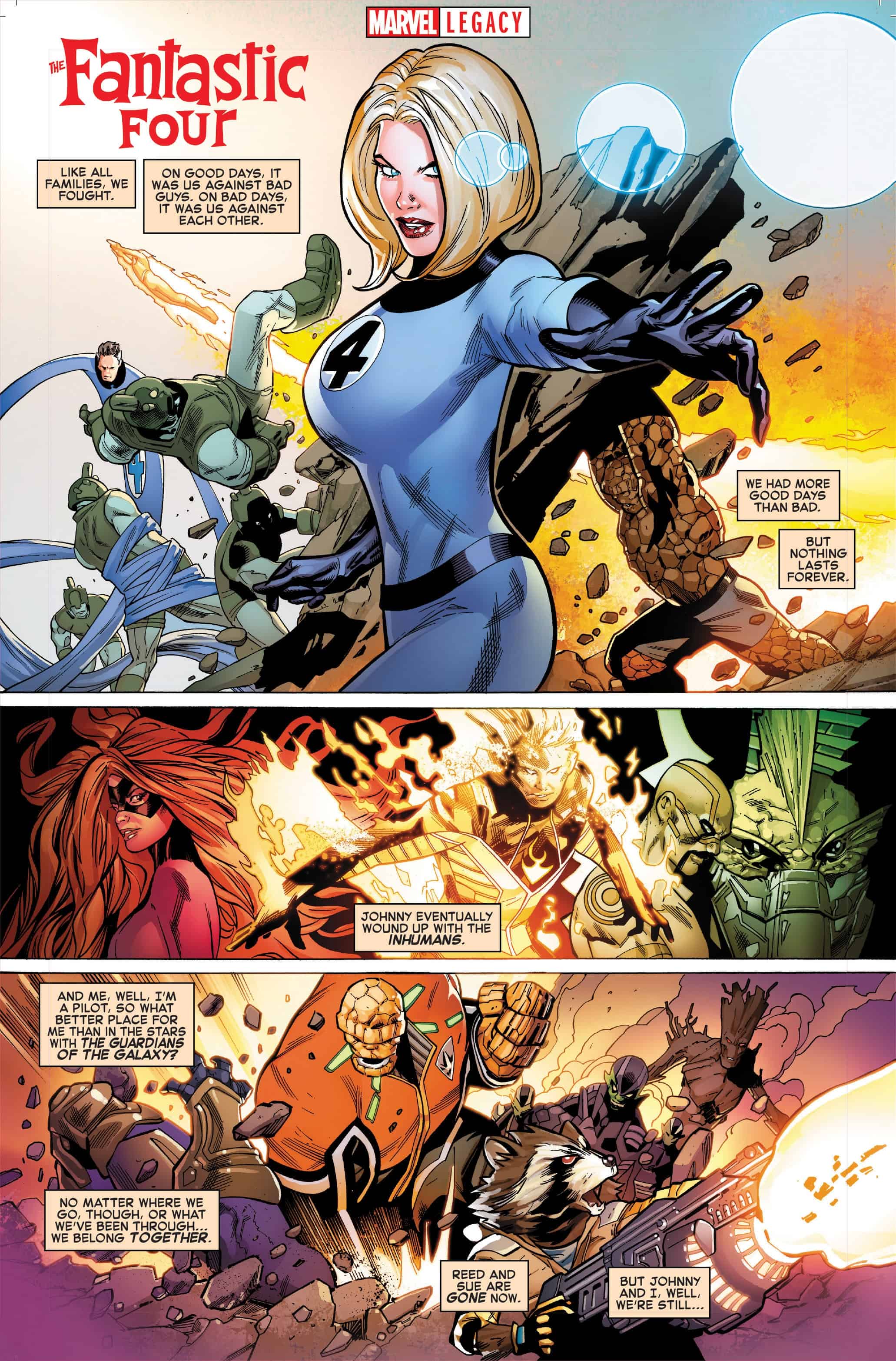 Final Thought: The absence of the Fantastic Four from the Marvel Comics cast of characters has become a source of controversy, with different opinions as to why it happened and what ought to be done about it. Marvel needs the Fantastic Four. They are not irrelevant and they are not relics of the 1960s. They are heroes of science, whose goals are always about today and tomorrow. Their mission is not merely to save the world, but to help make the world a place worth saving. Further, they are the foundation of the identity of Marvel Comics. This universe was not built on Spider-Man, the X-Men, or Iron Man. Its foundation is the adventures of four explorers who were “transformed by cosmic rays into something more than merely human”. The return of Marvel 2-in-One, and the story inaugurating the new series suggest Marvel Comics may yet reclaim its identity by restoring its original creation. (Time will tell, but remember “The End of the Fantastic Four” has never been forever.) This first issue is a skillfully written and beautifully drawn entry that makes you want to see more. The only remaining criticism is that Jim Cheung will not be aboard as regular artist, which will cost the book something in visual consistency. The challenge for other pencilers will be to keep the art at the level established in this issue. That’s another thing that will bear watching.