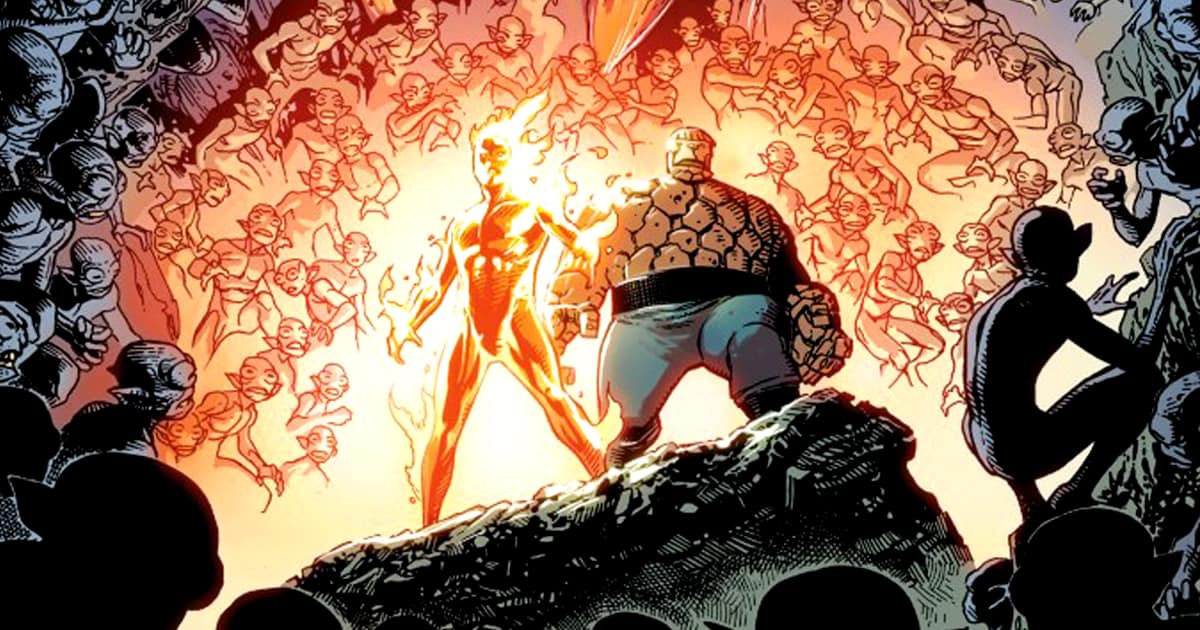 If you’re not a vintage Fantastic Four fan, I have two things to say to you. One: Where in the heck have you been for the last 56 years? Two: You are absolutely going to love Marvel 2-in-One #2. It’s even better than the first issue.  We return to the scene of the Fantastic Four’s first adventure for a “Monster Mash” with an ironic and tantalizing outcome. 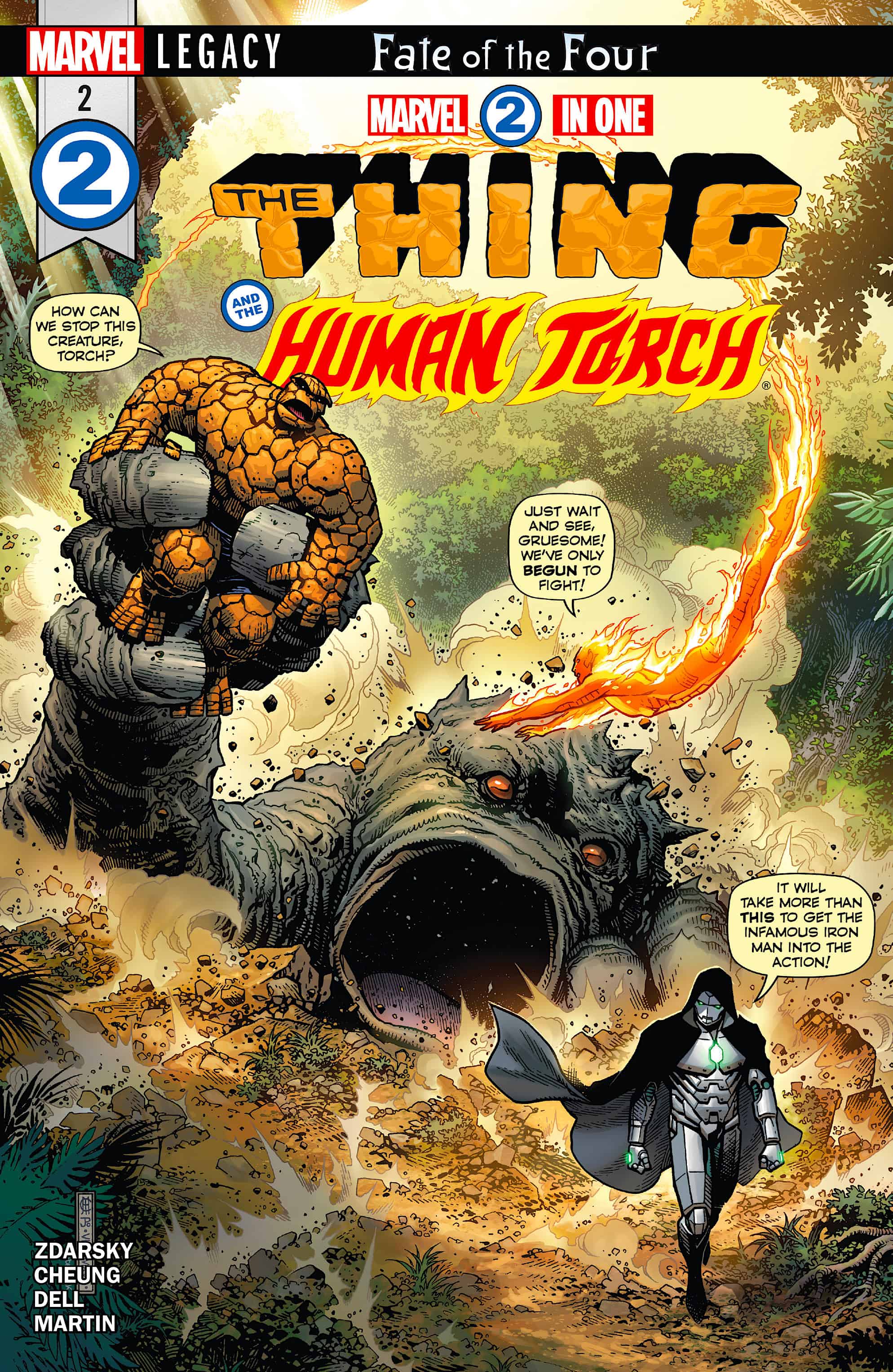 What You Need to Know:
When we left off, the Thing had learned—from Dr. Doom, of all people—that the missing-and-presumed-dead Mr. Fantastic left behind a piece of technology that could access any reality in the Multiverse. When he went to find the Human Torch to help him track it down, he learned that Johnny has sunken into despair over the disappearance of the Richards family and the deterioration of Johnny’s powers. What Ben did next was a surprise…

The Thing LIED to the Human Torch? Bashful Ben has deceived the Match-head? Really? Having a visit with Alicia Masters in her studio, Ben nurses his guilty conscience over exactly that. When he discovered that a depressed Johnny was acting out taking reckless chances, Ben convinced Johnny to come with him on his mission to find Reed’s “Multisect” device by telling the Match-head there was a chance that Reed, Sue, and the kids might still be alive somewhere in spacetime. It had the intended effect of pulling the Torch out of his funk—but it was still a lie. (As far as Ben knows.)

During this conversation, Alicia brings up when Ben “disappeared for months and Johnny and I dated, but I was actually a Skrull…” This is a simplification of what happened when Ben stayed on the original Secret Wars Planet and Johnny and Alicia became a couple in his absence and got married. Alicia was never actually a Skrull, but it was later retconned that the Skrulls had swapped Alicia for a Skrull spy named Lyja, a bit like that old Folger’s Coffee ad campaign. (“We’ve secretly switched this renowned sculptress for an alien imposter. Let’s see if anyone notices…”) I have long disputed the wisdom of doing that, as it led to a long-term reversal of character growth for the Torch, and I actually liked Johnny and Alicia as a couple, but let’s not go there now. 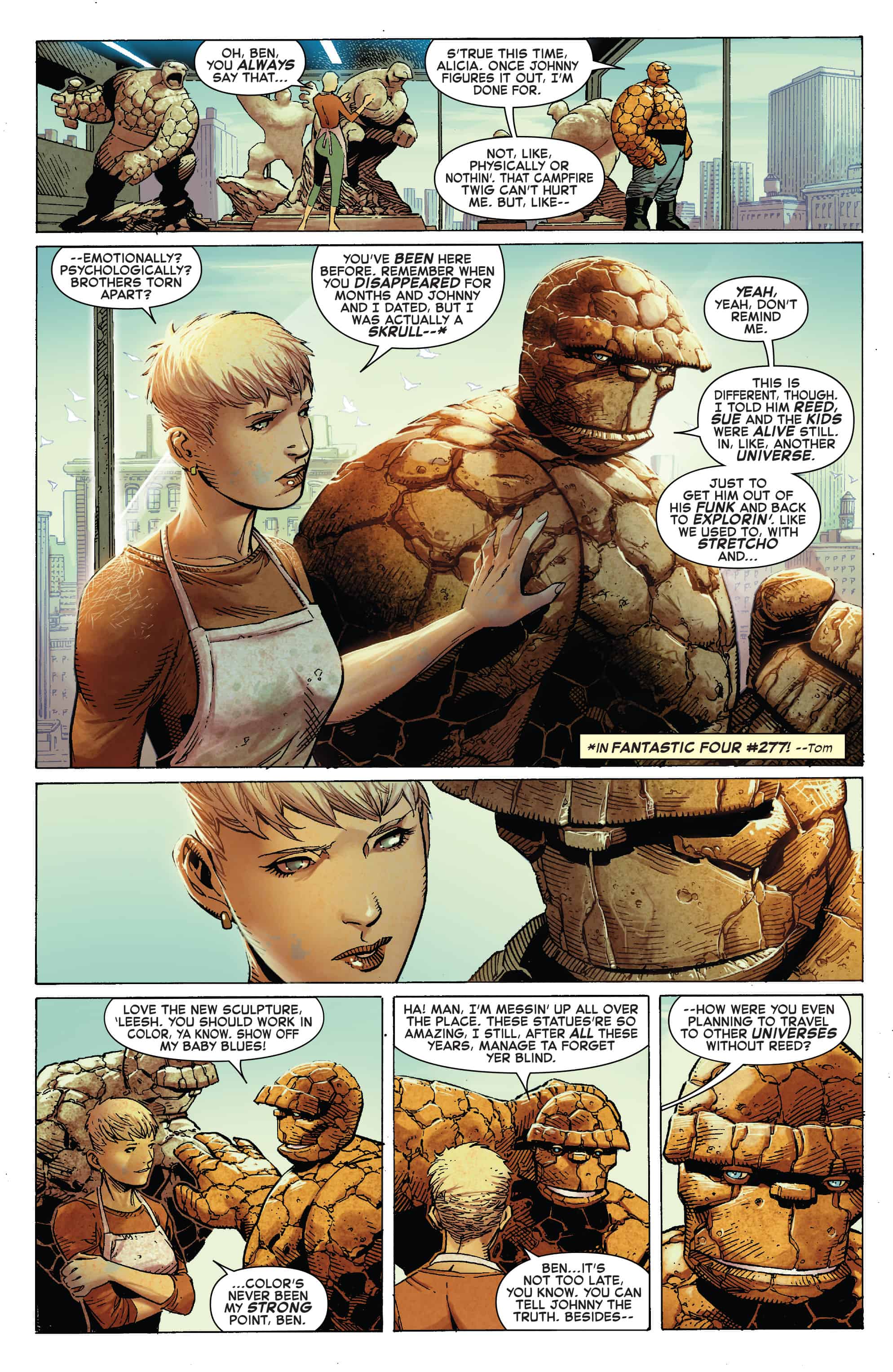 Reed’s holographic message to Ben told him to look for the Multisect at the place where they shared their first adventure, which takes Ben and Johnny to the site of the Fantastic Four’s first mission as a team, Monster Island, home of the malfeasant and melancholy Mole Man (Fantastic Four #1). But there’s a surprise waiting for them in the catacombs under Monster Island. What had been the Mole Man’s domain has fallen into a shocking state of…politics! After the events of the Monsters Unleashed miniseries (in which creatures from Atlas Comics ran amok), some of the colossal critters decided to make Monster Island their home—and Goom, Son of Googam (Tales of Suspense #17), has challenged the Mole Man for leadership! No—really! When both factions of the Island attack the Thing and the Torch, Johnny’s power failure almost results in a scene like when he was swarmed by Annihilus’s hordes and “killed” in FF #587. Johnny is saved when—of course—Dr. Doom appears and brings all the monsters and Subterraneans to heel. Doom, naturally, is here to claim the Multisect for himself because he believes only he should possess such power. Only Doom knows what to do with it—the same thing he believed about the Power Cosmic, and Thor’s fallen hammer and the power of the Beyonder… Well, you get the point; it’s Doom. It turns out the Multisect isn’t on Monster Island at all, which leads to further antagonism between the always-arrogant Doom and the clobber-hungry Thing. In the meantime, Doom has resolved the political unrest on Monster Island by making himself its new ruler. Yes, our “reformed” arch-villain is doing everything BUT try to conquer the world. You’ve got to love him. 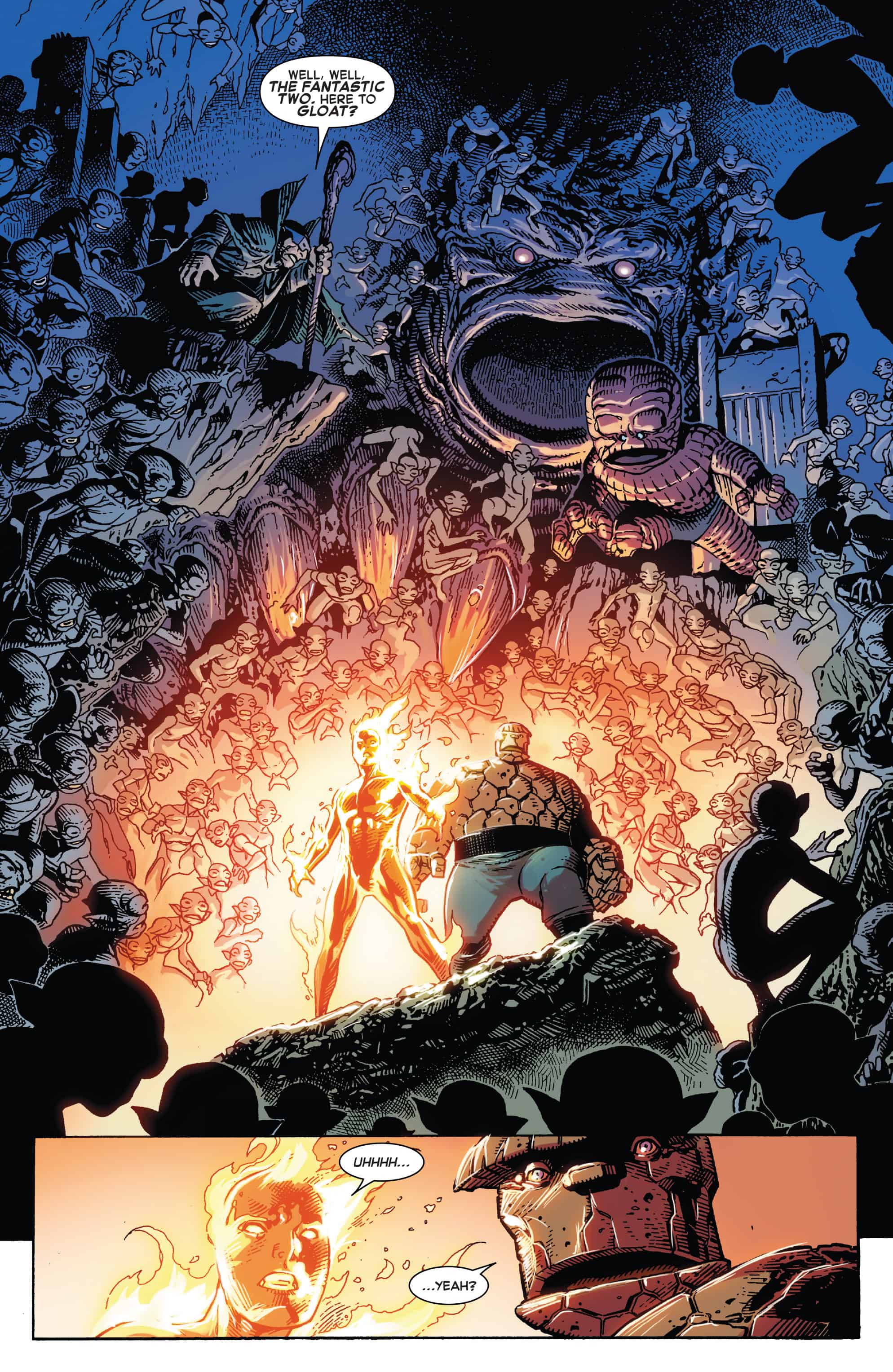 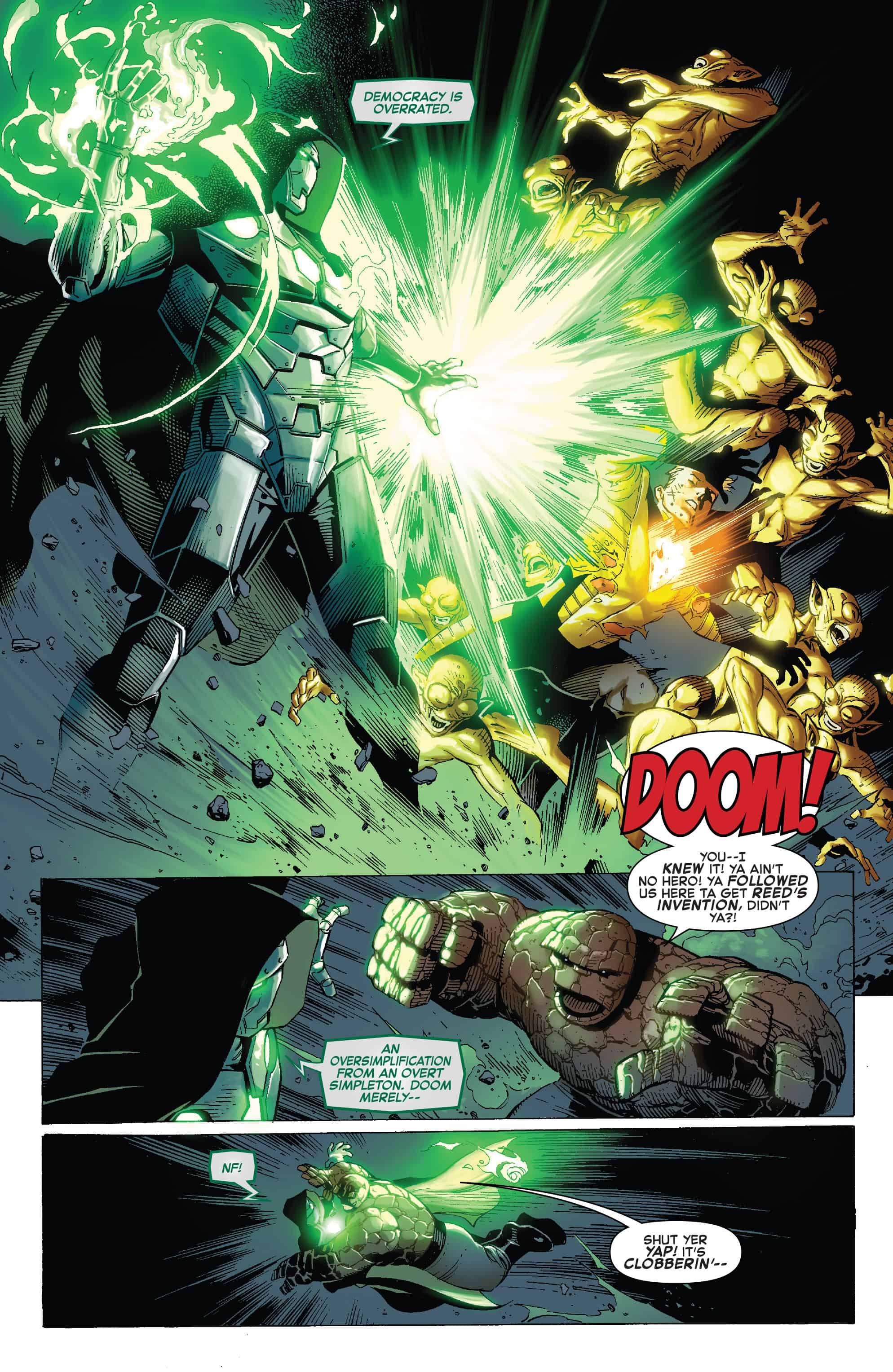 So if the Multisect isn’t on or under Monster Island, where in the heck is it? The answer lies in a flashback to the “first adventure” not of the Fantastic Four, but of Reed Richards and Ben Grimm—in college, where the smug, condescending, conceited, and manipulative Victor Von Doom beat out Reed Richards for a science prize. After the narcissistic Victor rubbed Reed’s nose in it, Reed and Ben snuck into the University’s awards case and used an “F” on a piece of tape to change the name on the award to “Victor Von Doof”! Victor’s smoldering outrage over this retaliation—and the laughter of the campus at Victor’s expense—set the stage for Victor blaming Reed for the experiment that scarred Victor’s face, which later led to the greatest hero/villain enmity in all of comics. But the point right now is that Ben has figured out that Reed hid the Multisect inside base of the “Von Doof” trophy! When he and Johnny make another clandestine visit to Ben and Reed’s alma mater, they retrieve the gizmo and are ready for a jaunt through the Multiverse! 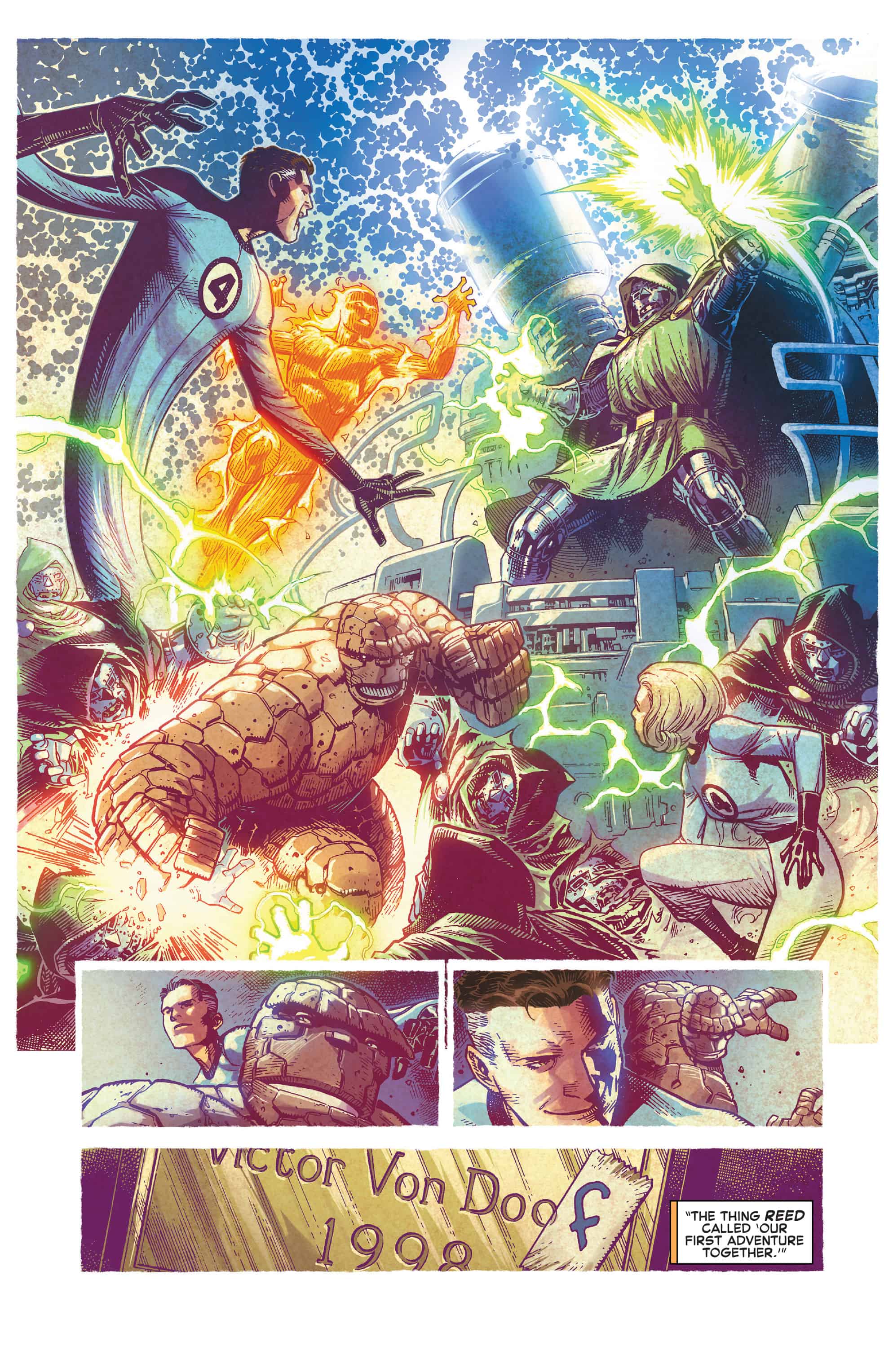 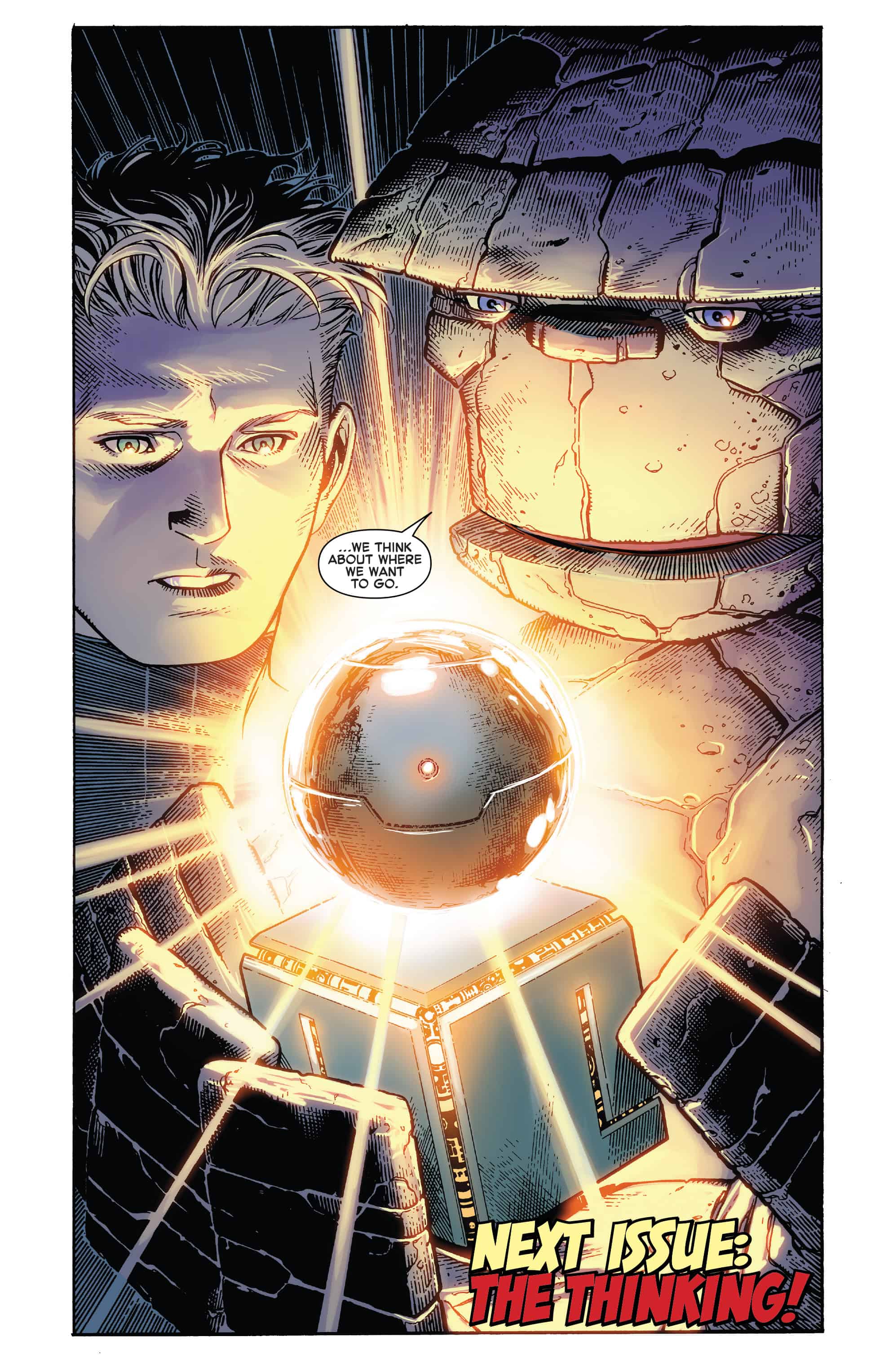 Well, there’s still the matter of Ben’s lie to Johnny, which will inevitably be exposed and will, of course, have consequences. That should be fun to see. By way of background, there is a precedent for members of the FF lying to each other “for their own good.” Remember that earlier reference to Ben staying on the Secret Wars Planet (Marvel Super-Heroes Secret Wars (1984) #12; Fantastic Four #265)? At the time, Reed allowed Ben to believe that some property of the Beyonder’s planet enabled Ben to become human at will. In fact, Reed had learned that Ben possessed this power all along and had been suppressing it for fear that Alicia loved him only in his mutated form, and he never told Ben. (Fantastic Four #245.) When Ben discovered the truth (after losing said power) and also discovered that Johnny was sleeping with Alicia, he was livid! (Fantastic Four #277; The Thing #23.) So what happens when Johnny finds out that Reed, Sue, and the kids may not actually still be alive and that Ben lied to him? Of course, if the Richards family does turn up alive (and no one out here in the Real World believes they’re dead; we KNOW they’re out exploring other realities), it will be a moot point. But this has got to yield some kind of drama at some point. It’s only a matter of time.

Gratifyingly, Jim Cheung is on board as penciler again. I thought he would be checking out after the first issue (as I reported last time), but no, he’s here for another issue, and the art for this one is just as good as, if not better than, last time. I don’t know how long he’ll actually be around, but visually this issue is another winner. Cheung shows a fine mastery of drawing the Thing and the Torch, and his rendition of the, ahem, “reformed” Doom is a treat. Props also go to Zdarsky’s writing. His dialogue is snappy and spot-on, and he makes very skillful use of the history of the Fantastic Four. The story he turns in for this issue brings up great memories of classic FF stories and, in combination with Cheung’s art, hits exactly the right mood. The whole thing makes you feel as if you’ve stepped right back into the world of the Fantastic Four and it all feels exactly the way it should. This issue was a great pleasure to read.

And that cover…! It’s the perfect and most highly appropriate cover for this story! That is just great!

Final Thought: In the scene following Ben’s heart-to-heart with Alicia, as he and Johnny are on their way to the island, Johnny is sitting in the Fantasticar reading the latest issue of The Fantastic Four—which the Marvel Comics of the Marvel Universe is still publishing, apparently making up new stories about Earth’s greatest heroes in the absence of half the team. It makes you wonder since the FF book in the Marvel Universe itself was licensed by the FF, which at the moment doesn’t exist, how exactly are in-story Marvel’s rights to the book set up? How are they still authorized to do this? Perhaps the contract hasn’t expired yet?

The appearance of Googam—one of those goofy Atlas Comics monsters that preceded the Fantastic Four—is a fine callout to Marvel’s heritage. Marvel owns and uses that part of its history, and there is an undeniable charm to all the crazy Kaijus with the outrageous names who stomped their way through those old Atlas books. There is everything to love about this issue. I haven’t much to add to the high marks I’ve already given it. But if and when we have a monthly Fantastic Four book again, I would nominate Zdarsky to write it. He clearly knows what he’s doing with this property.