Marvelous X-Men #2 Beyond the Shadow of Doubt

The Marvelous X-Men meet Apocalypse at a Love-in. Will they tune in and drop out, or will their buried natures bring them to a bloody end?

Robertson Davies wrote, in his masterful novel about a middle-aged man coming to know the truth about himself, his history, and his nature, that ‘Fanaticism is overcompensation for doubt.’ In other words, when people react violently to an idea which challenges (however slightly) the beliefs they’ve based their lives upon it is because, in their hearts, they know (or at least suspect) that those beliefs are flawed. When a person with a balanced sense of self awareness encounters an idea which is alien to them, they might respond cautiously, but they are generally unwilling to reject that idea outright. Ever since his introduction in 1975, Piotr Rasputin has been wrestling with the Spectre of Doubt. He questions everything, constantly: his place in the X-Men, the rightness of Xavier’s dream, his duty to his (constantly shrinking) biological family, the quality and strength of his love. He is, in many ways, a character who is defined by doubt, and his reaction to his uncertainty about his place in the world. And that is healthy— or at least more healthy than the alternative that you see in fanatics wearing MAGA hats who rail against their own buried understanding of their own inadequacy by declaring the unworthiness of everyone else. 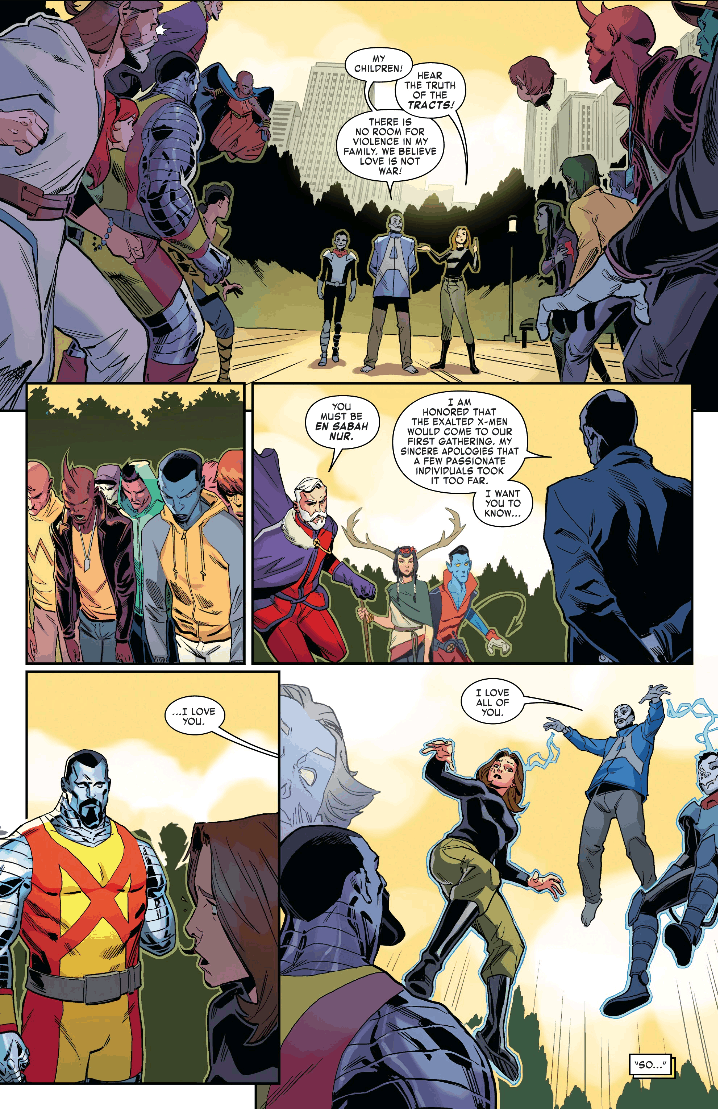 All of that is changed in AoX. As you can see, in this issue and also in Apocalypse and the X-Tracts, Colossus has become one of the most vocal, most overt, least-flexible adherents to X-Man’s dogma. He violently chastises his teammates when Jean (who knows herself a little better despite Nate’s tampering) suggests that they ignore the movement, or at least refrain from acting until they have more information.

Of course we, as readers know what (or who) Pete’s so hung up about. And, on some level, he must too. He does keep painting those purple dragons. 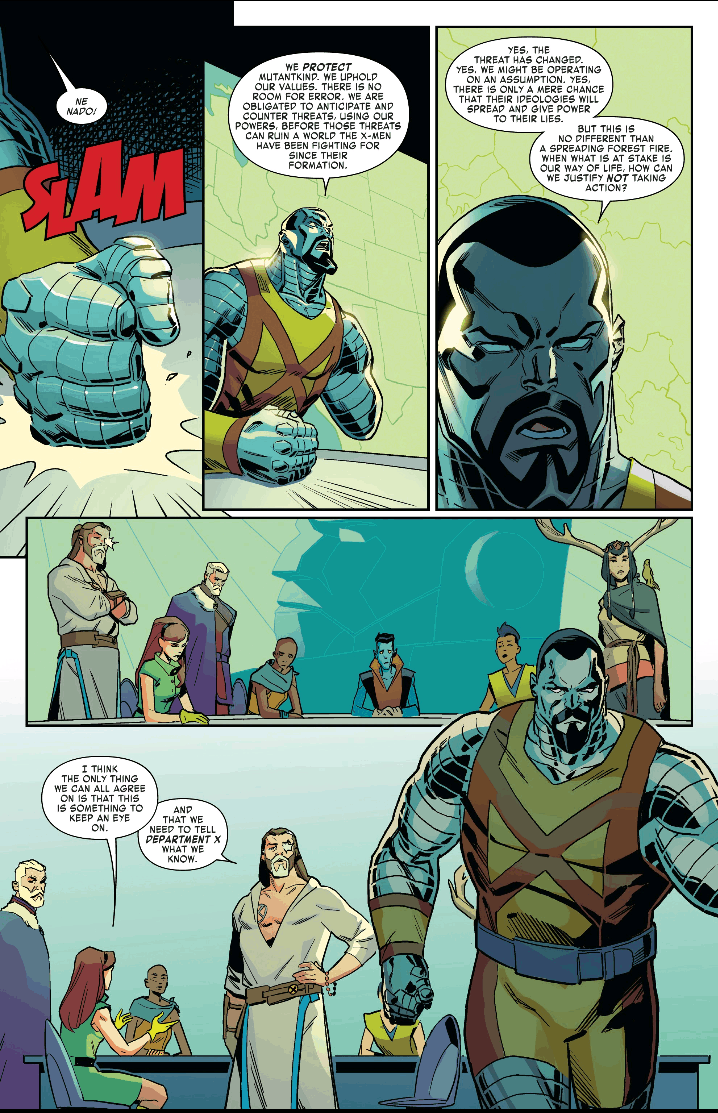 It was interesting to see the ways that Nate’s world continues to fracture at the edges, as memories rise up. Human connection (Pete seeing Kitty, Storm touching Eric, Laura’s flesh, and then her claws, impacting the body of that protester) keeps dredging up scenes and images that they know without knowing. And they’re all fighting the revelation. Eric drowns his nature in liquor (what happens to that fanatic when you remove his purpose? Has Eric been fighting so hard, all this time, because he secretly fears that Xavier was right?) Colossus paints, Storm knits presents for her friends. Anything to keep the doubt firmly shut out, unfelt and unexamined. 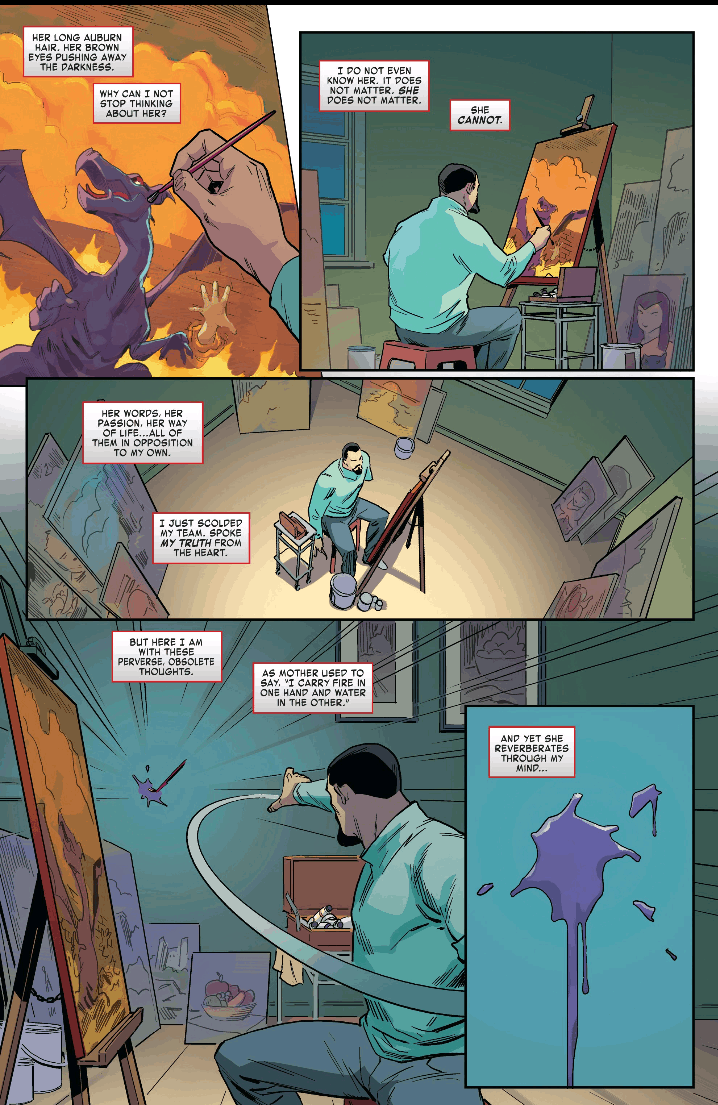 And yes, there are questions. This can’t be only X-Man’s world. Who is Moneta? What is she, really? What happened to Legion? Is this reality just another pocket prison, designed to keep Nate safely out of the world? It would be like Legion to sacrifice his allies to do it. He did keep the X-Kids trapped in an echo of the AoA for something which felt, to them, like more than a year.

This story unfurls itself like a complex blossom, each petal-page revealing another layer to the mystery. And the writers are taking their time about it — as well they should. Spring can’t be rushed, and neither can story. 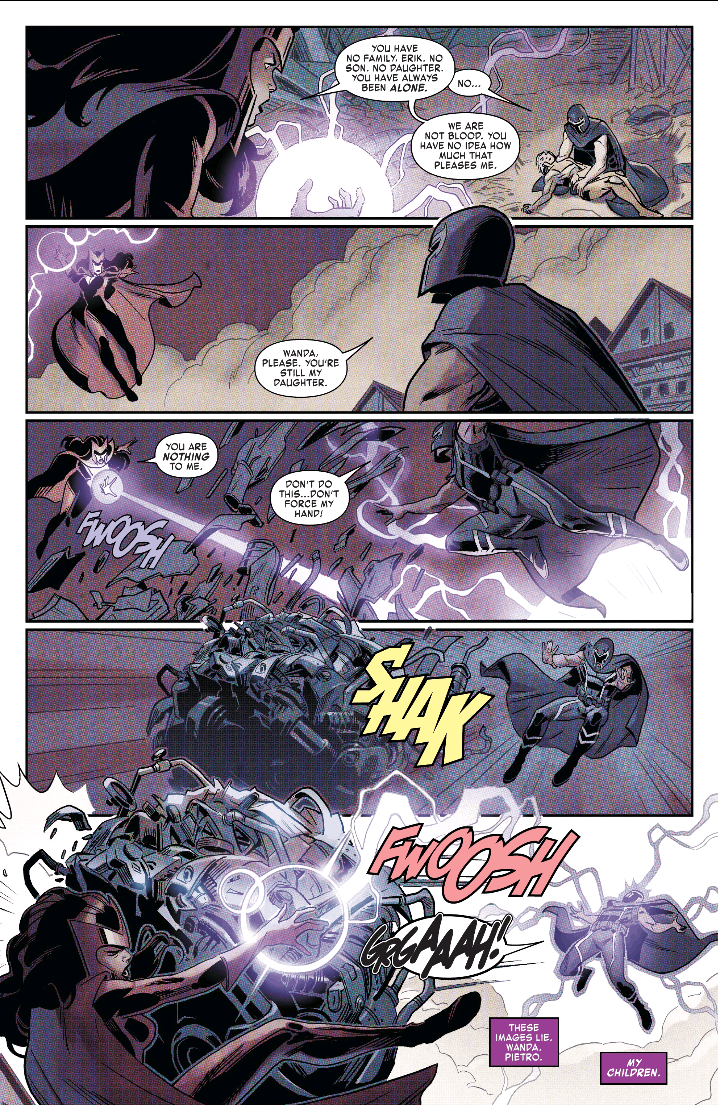 There will be plenty of people who complain about the pacing of this series (despite the fact that there is plenty of action) but they’re also, often, the same people who cannot distinguish the difference in tone between a film by Daniel Craig and one by Jason Statham. This book is an adventure of a more nuanced kind — one which rewards multiple readings. 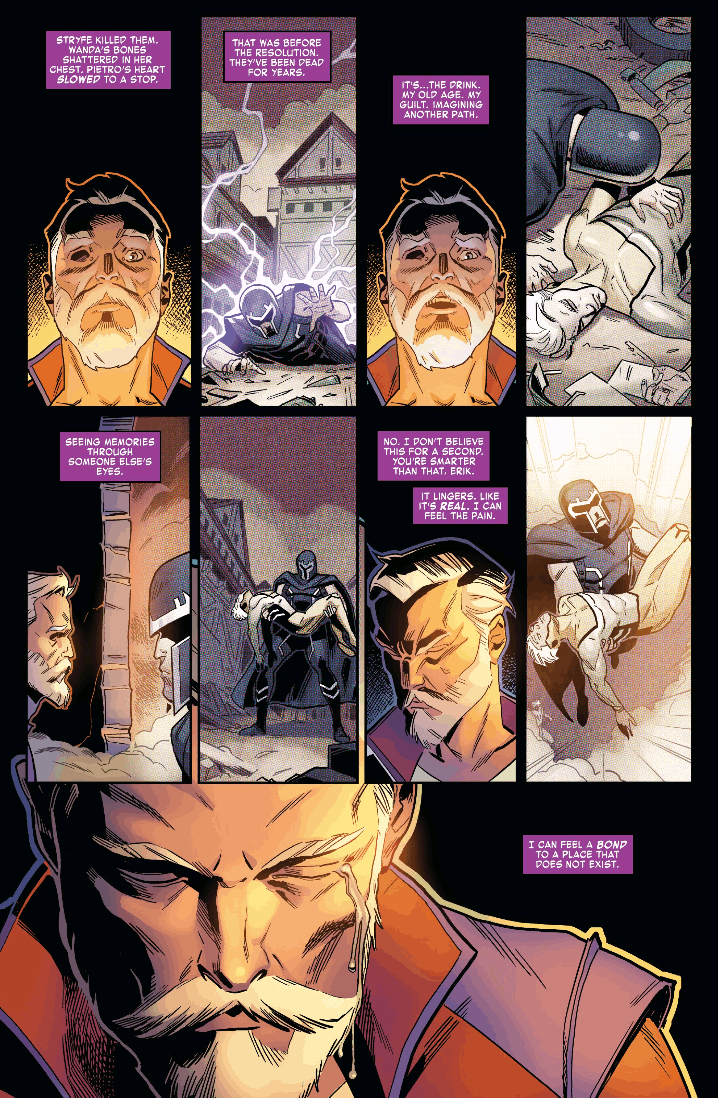 For instance, if you blast through it once, unthinkingly, seeking explosions, you’ll miss the way that Marco Failla has subtly loaded each page with as many call backs to Famous X-Man Moments as possible (look at the featured image of this review, if you want to see one of them) and you might ignore the way that the pretty-pretty-boring-clean line-work gives way to a more brutal, gritty tone in the flashback panels. Matt Milla’s colouring contributes to this effect, this intentional disconnect, in a major way.

All of the best stories we have, from Superman to Beowulf, treat the territory of our inner-worlds, both individual and collective. This story is not an exception to this rule — though it is proving to be exceptional.

This story balances action, world-building and introspection to highlight the fact that when doubt is forbidden we all are made into fanatics. Welcome to the second issue of what will likely become the best series of the year.

Marvelous X-Men #2 Beyond the Shadow of Doubt