Marvel Voices: Pride #1: Karma is a Useless Lesbian in ‘You Deserve’ 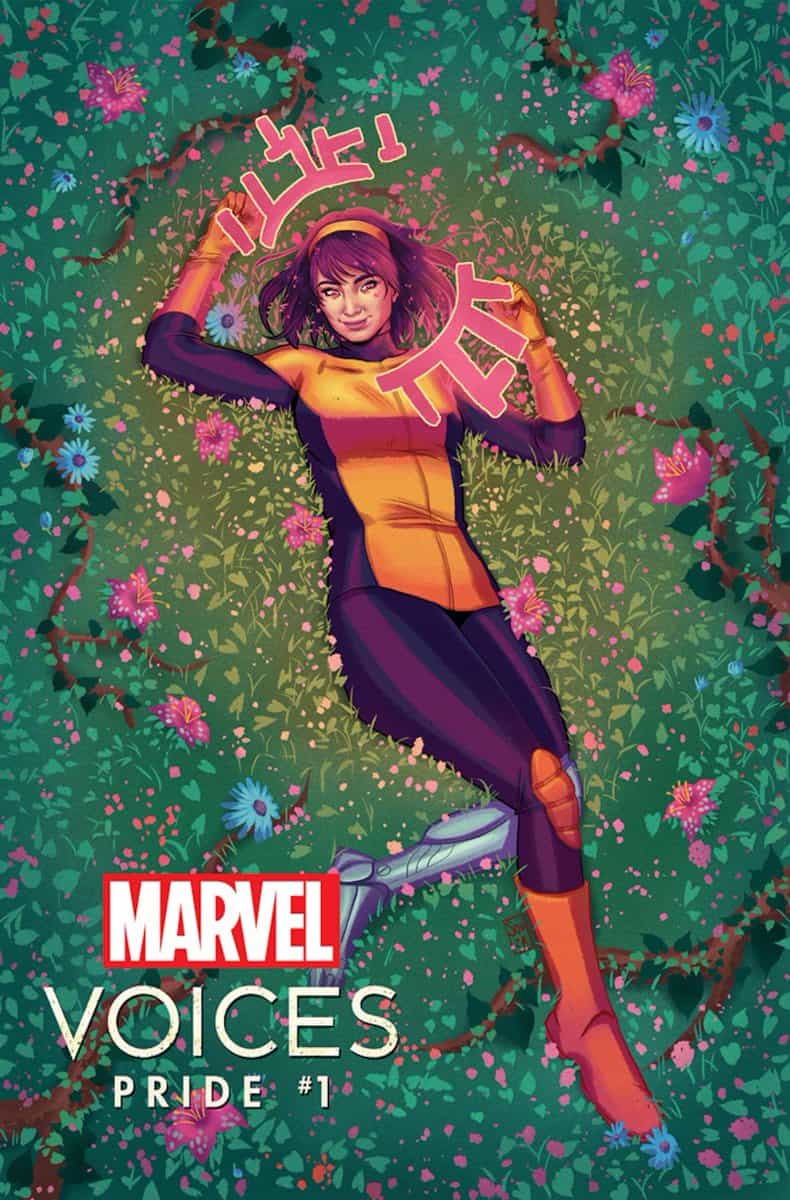 The Hellfire Gala Pride spin-off! Xi’an has a crush!!! Will she ask Galura out to dance? Not by herself. She needs Yana to yell at her of course!

I’ve been a fan of Karma and Magik since I was 14. They’re two of my fave five characters in all Marvel, and a lot of that is for the complexity of their trauma and how they navigated that with the other New Mutants. I think Vita Ayala is making one of the best New Mutants run right now, but it is here, in this short story, where I have recognized things in Karma I have been waiting to see on a page for a long time.

Joanna Estep art over Brittney L. Williams’ layouts conveys preciously every second of the internal struggle of a character that has been traumatized both in deeply personal and social ways, and that has learned to reject and doubt her own desires, and that is contrasted gracefully with the witty charm of Yana’s comprehension and profound kindness dressed as boast attitude. And then on top of that the sweetness, violet veiled, emotively soft coloring of Brittany Peer (as I’m saying a lot in today’s reviews, my new fave colorist), and Ariana Maher fitting all the insecure torrent of words in bubbles that feel airy when you get yourself be dragged by the story. This comic is a perfectly conveyed look at Xi’an’s emotional life, and I couldn’t have connected more with it.

There’s a lot on play here, and a lot of it is specific to Xi’an’s personal history: abused since she was little, she has done harm (both unintendedly and as result of her bad decisions) to a lot of other people too (including her teammates), and she has retconned with a lot of these things through her life, specially in Marjorie Liu’s incredible Astonishing X-Men run. She’s a disabled, Vietnamese-American, lesbian woman that inhabits a place where all of this is not trivial to the character. And, in this story, her arguments mirror so many insecurities of queer people (and specifically sapphics and lesbians) around predatory stereotypes that are forced on us, learned shame of our sexuality, thinking we’re never desirable because in fact we are not in society’s face, and also an experience that I can only explain as “She’d never like me, how would she?” that is almost always completely untrue and obnoxious to any reality. And heck if I hadn’t seen a lot of my own insecurities when approaching other women and non-binary people in Xi’an’s own insecurities when approaching Elle a.k.a. Galura.

And then enters the metaphor. Xi’an is so worried about manipulating Elle because her power is literally mind control, and she thinks she can’t make that compatible with her desires. This, within the context of Xi’an’s lesbianism and how society paints lesbians as always predatory, feels especially poignant. But, the best part is how the execution of the story, and particularly the art, handles this. Brittney L. Williams is hands down one of the best creatives to put this visual narrative in service of both showing Karma’s sense of shame and putting the reader in an understanding position. We know that all of these worries are placed within Xi’an’s trauma, and Estep’s art conveys sweet, tender and playful comprehension from the reader in the same fun way that Yana teases Xi’an about her crush. And, that ending, with that sweet kiss, that slow dance with music FX all around it, wrapping up Karma’s insecurity in the blanket of sapphic love.

'You Deserve' is, in its complexity and simplicity, a soft story about insecurities, yearning, trauma and taking brave steps, with a friend's help, in the journey to be proud and unapologetic about one's desires. It's also wrapped up the most beautiful visual package possible.

Marvel Voices: Pride #1: Karma is a Useless Lesbian in ‘You Deserve’