Masters of the Universe Revelations #1: The Power Returns!

Masters of the Universe Revelations #1 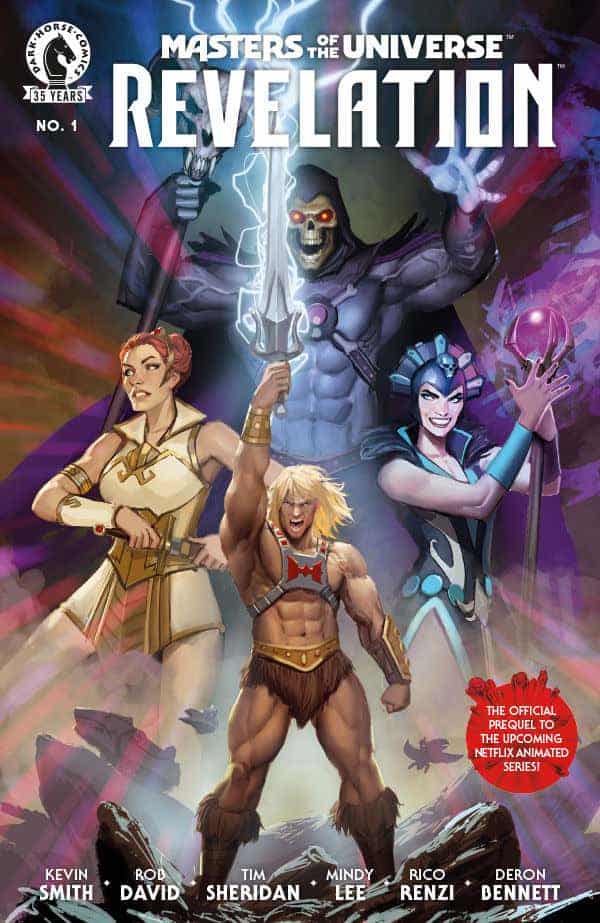 He-Man is the most powerful man in the universe. He battles the evil forces of Skeletor to see who will become the Masters of the Universe

Full disclosure: I am a He-MANIAC!!! I fell in love with the Masters of the Universe… um… universe when I was just a kid and I stayed a fan long after the cartoon and toy line had gone off into the sunset, never imagining that I’d ever see them again. Let alone see a full-tilt revival with TWO new TV shows, TWO new toy lines, and a brand new comic series!!! So yeah, I’ve really been looking forward to this book since it was announced earlier this year.

The good news is that this series has a lot of writers. The bad news is that this series has a lot of writers. The series was scripted by Tim Sheridan from a story by Kevin Smith and Rob David. It’s a heck of a story, let me set that straight. It’s an A+, 10 out of 10, a clever story where stuff actually happens which is an amazing change of pace from the villain of the week type of stories that the Masters of the Universe stories usually are. We get some backstory that we didn’t even know that we were missing. One we always suspected, but one that makes you gasp in shock and awe at what you’re reading. This issue is honestly SO packed with events, plots, reveals, characters, settings and almost every other thing you can think of that makes a good story into a great story.

If this is your first exposure to He-Man, don’t worry about it, you’re going to be able to keep up with the story, no problem. If you’re a hardcore MOTU fan, you’re gonna lose your shit! I can say shit, right? This is one of the very few examples where Easter eggs written into a story for a very specific fandom doesn’t distract at all from the main point of the tale. Now, I did mention that the bad news is that there are a lot of writers? My one criticism is that early on, specifically in the narration of the story, is that the writing is a little awkward. It kind of stumbles over itself. A classic case of “you can write this, but you’d have a hard time reading this.” Once you get past the first few pages, the dialogue takes over and it becomes a non-issue for the most part. Not a huge concern, it was just something that stuck out to me, 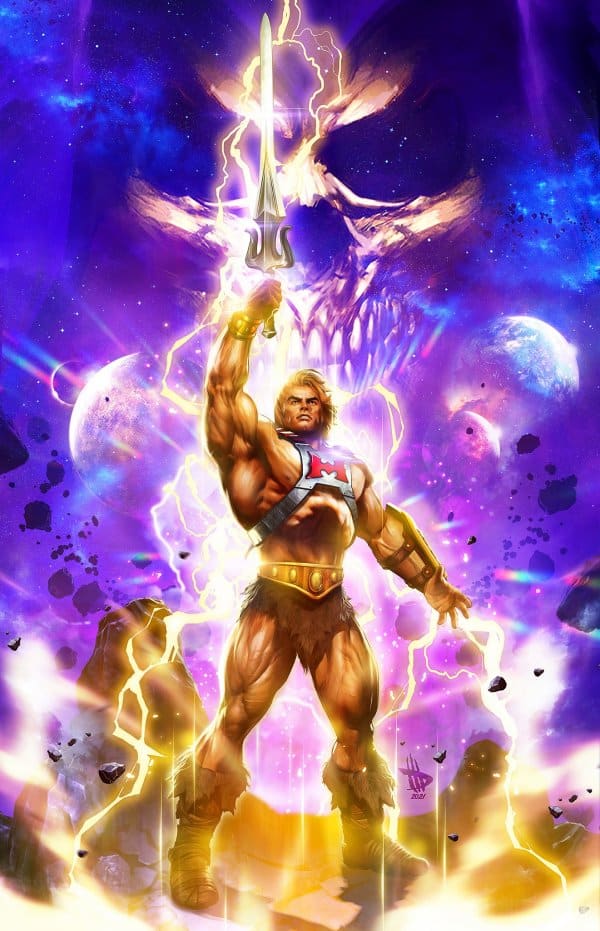 Artist Mindy Lee had me worried. When it was announced that she was doing this book, I looked her up immediately and wasn’t exactly thrilled with what I saw. In a lot of her work, she has a very manga-influenced style, which I thought was the LAST thing that this book needed. After all, the Masters of the Universe cartoon had a distinctly American look thanks to US-based Filmation Studios. It was miles apart from the cartoons of the same era that were animated oversees by Sunbow. So what sense did it make to get Mindy Lee to do this book? Take it from someone who knows, a LOT of A-List comic creators working today have a very special love for this property and any of them would jump through hoops to get this job!

But then… I saw pages. And when I saw the pages it all made sense. Lee changes up her style just the slightest bit and by doing so, she creates a look that is unique in its look. If I had to compare her work to someone else’s it would have to be legendary music producer/murder enthusiast Phil Spector. Their styles are similar here in that Lee makes a visual “wall of sound” by throwing a TON of detail in, but by turn her style definitely has one eye on the Filmation series, as the original characters that she designs look like they come straight from the minds of the animators of that show. All the old standards look great. They’re updated but not really changed, which proves Lee’s excellence of execution when it comes to this series. And just like the writers, Lee throws in her fair share of Easter eggs to make longtime fans like me lose their shit.

A great start to what I believe will be a VERY important series in the Masters of the Universe mythos. Forget what's come before, THIS is the new cannon, following along the road laid out in the original cartoon series.

Masters of the Universe Revelations #1: The Power Returns!