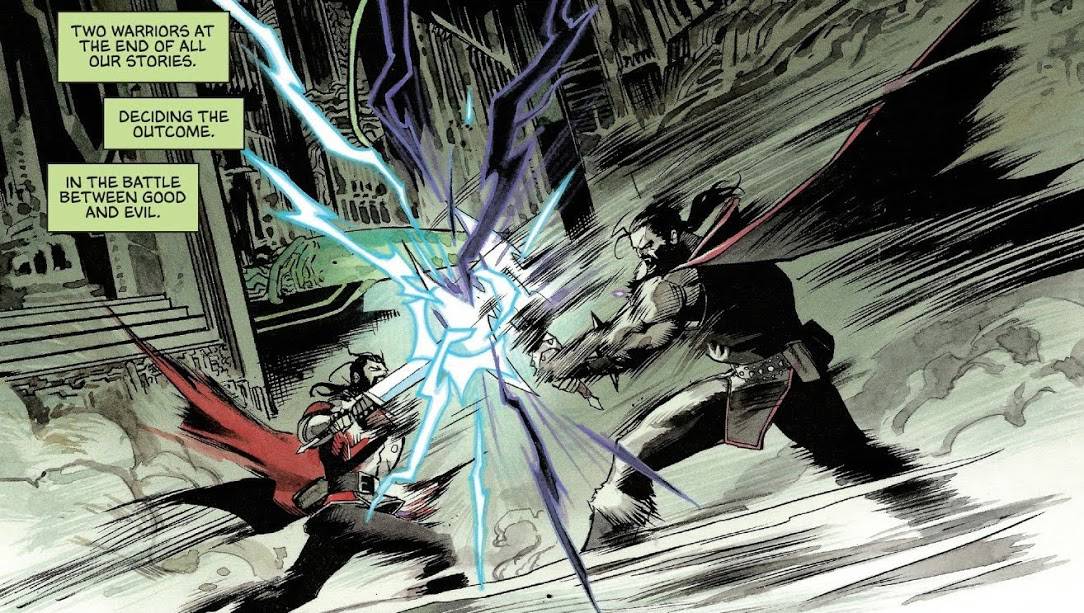 Come gather round, it’s Christmas story time kids, this season’s tale is one of intrigue and mystery, good and evil, Santa Claus vs Aliens! Wait, What was that last part?
Klaus is ancient warlock Grant Morrison’s love letter to ancient viking Christmas, and is exactly as amazing as it sounds. 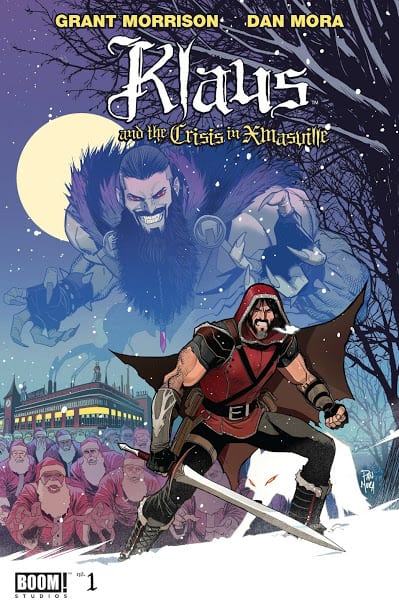 What You Need to Know:
There really is a war on Christmas, and it’s greed. from petulant spoiled children who steal from those less fortunate to evil corporations trying to make a buck off his likeness. Luckily Klaus is no stranger to war, and this isn’t a Coke commercial.

In the interest of festivity I have formed the synopsis of this book as an epic 16 verse Christmas poem, hope you like it and happy holidays regardless of religious belief from me and everyone at Comic Watch!

We open on a dark and dreary night
a family is lost and scared in the snow
they stop, looking for an end to their plight
but this town is not one they ought to go 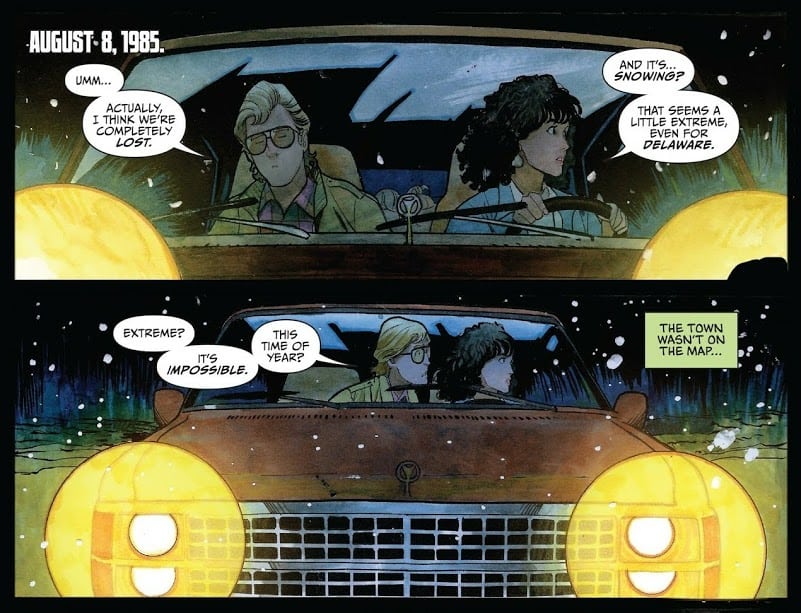 This sleepy village is the town of Xmasville
not on any map nor in the public eye
filled with Santas, can’t leave, never will
not even they know exactly why

Kidnap they do the sad lost family
they trap the scared father in a suit of his own
dearest mother goes to the factory
terrified, the childer are whisked off alone

Elsewhere, a flare shines, a beacon in need
an elderly woman, Kate, is met by a man
her family is missing she needs help from him, please
Klaus accepts, he’ll do what he can

Klaus is huge, powerful and strong
Lilli, his wolf, howls, the won’t fail Kate
Klaus is kind and generous, doing no wrong
Lilli and he run to Xmasville in his sleigh

Back in Xmasville an evil plot is afoot
children have been kidnapped, whisked far away
couple profiteers seeking nothing but loot
and an otherworldly menace, leeching our race 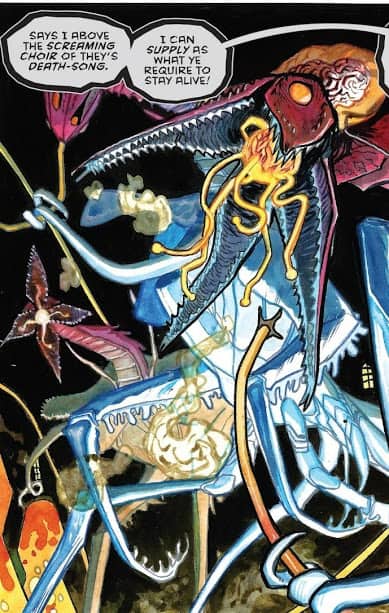 Klaus and Lilli find the small town, Lilli runs off
Fake snow abounds, but where is Lilli leading?
An evil giant Santa Claus, found the white wolf
Drinking her blood, Lilli is BLEEDING 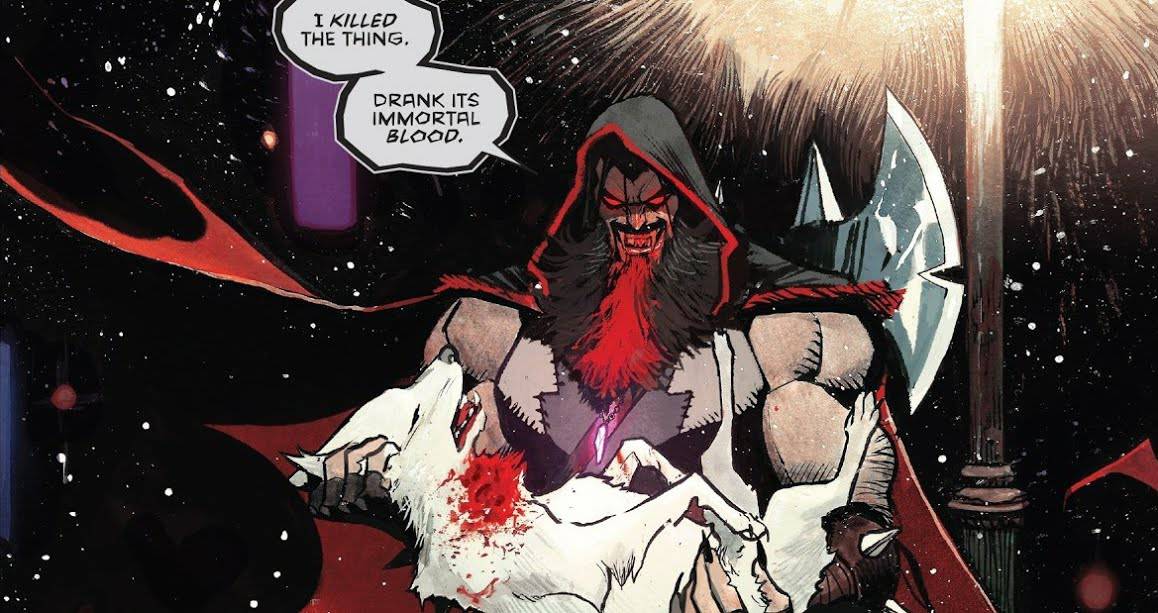 Klaus attacks but he is outmatched
stronger and faster, full of fury and wrath
The other Santa takes not a scratch
despite Klaus’ efforts this is a bloodbath 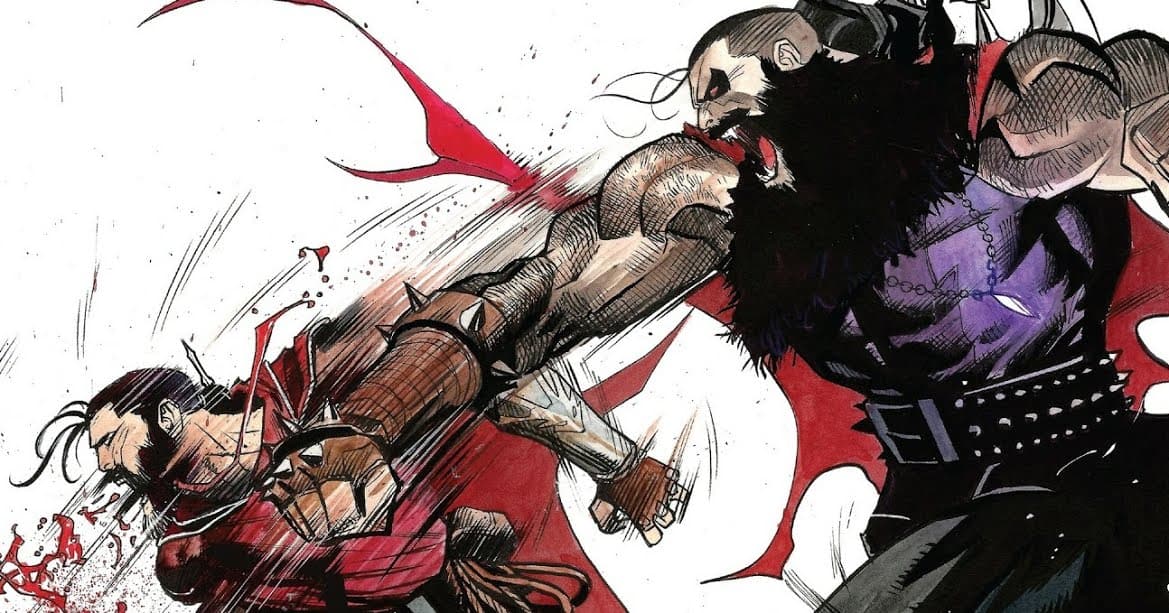 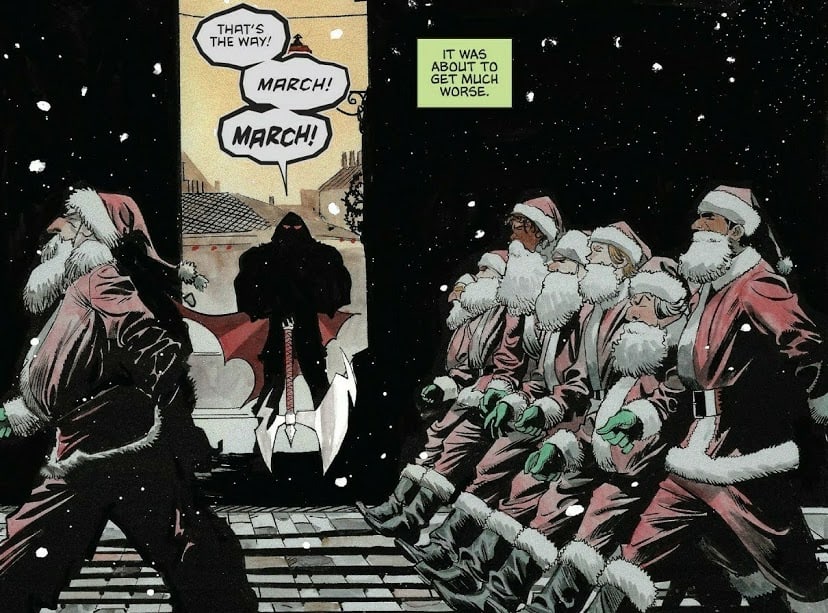 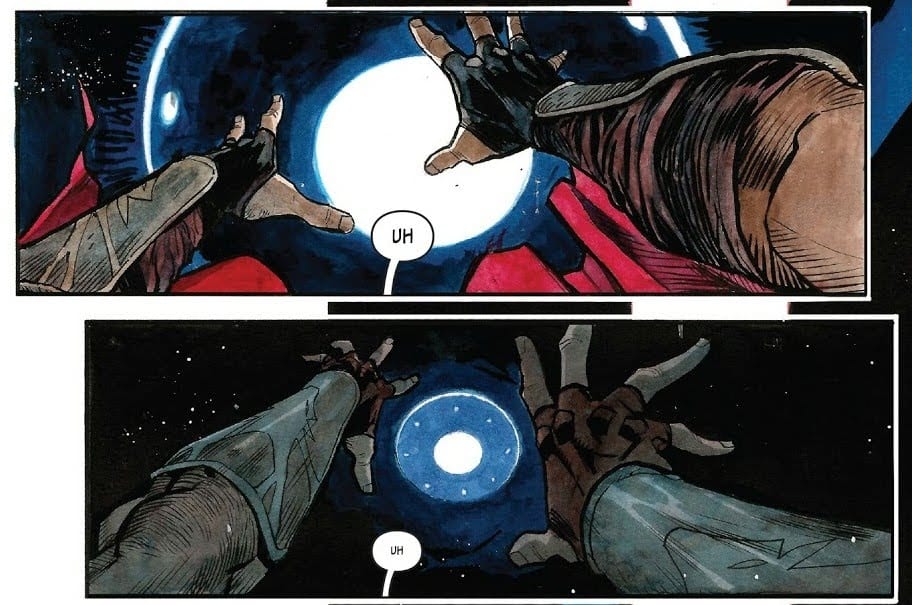 Why would anyone help aliens? What could they need?
an army of Santas, twisted, evil and warped
As with anything else, the answer is GREED
Then a new Santa, theirs, will sell in their stores 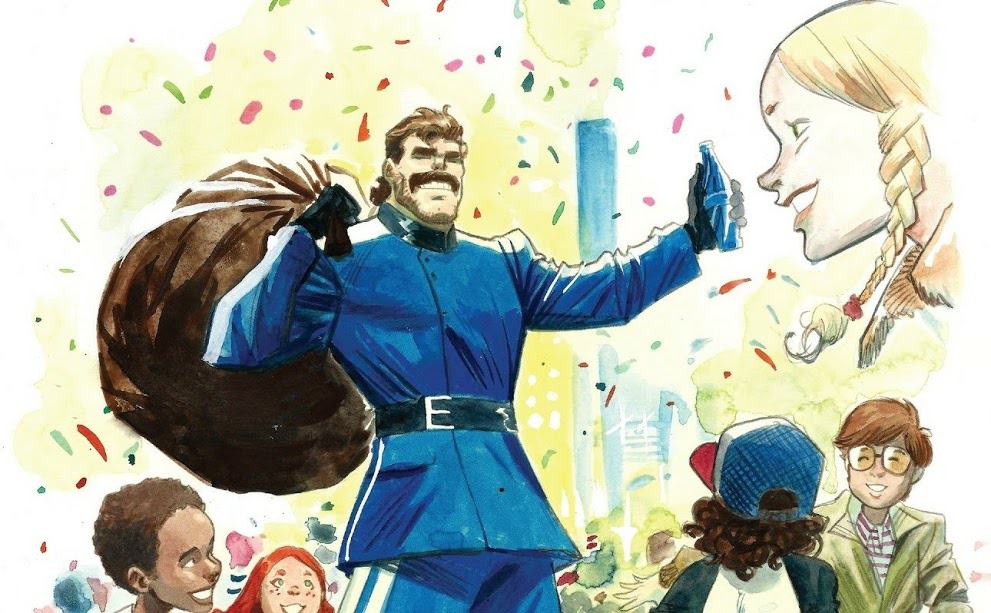 Klaus awakens, surrounded by friends
who could have helped him? is his wolf lost?
he is in a place where time knows no end
he’s in the workshop of GRANDFATHER FROST! 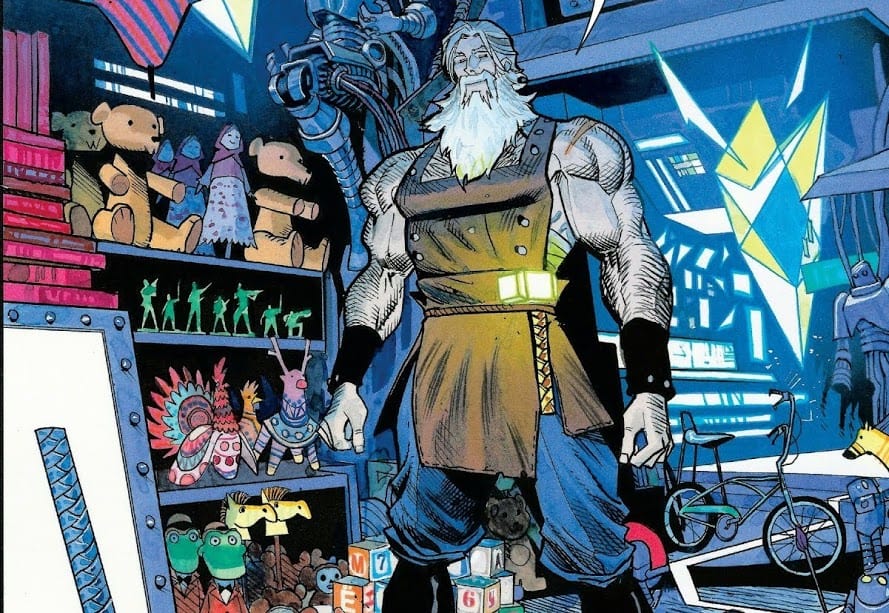 He asks for help, but can’t get it really
he receives a choice from Grandfather Frost
Klaus can get help, or Frost can save Lilli
Frost’s granddaughter will help before all is lost

From aboard a strange craft, they watch the small town
Klaus wants them to see them, this time he’ll scratch
from the sky, they go down
time for the rematch 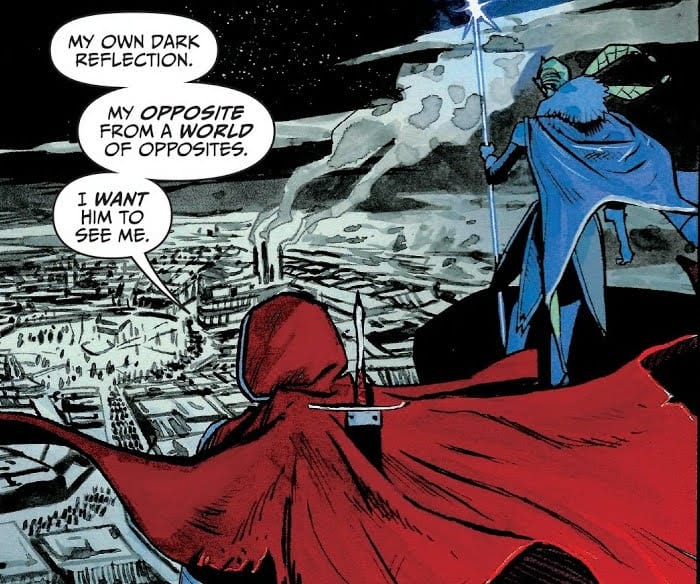 A clash from the stars, but Klaus is more than a man
beside him, the Snowmaiden fights, with lightning and smoke
Klaus is slowly losing, doing all that he can
Within his foe, something cold, malicious and evil awoke

Suddenly the Wolf Demon breaks Snowmaidens staff
throwing the two moonsilver pieces far and apart
Klaus has an idea, a silver spear he does have
He takes the silver and stabs the werewolf in the heart 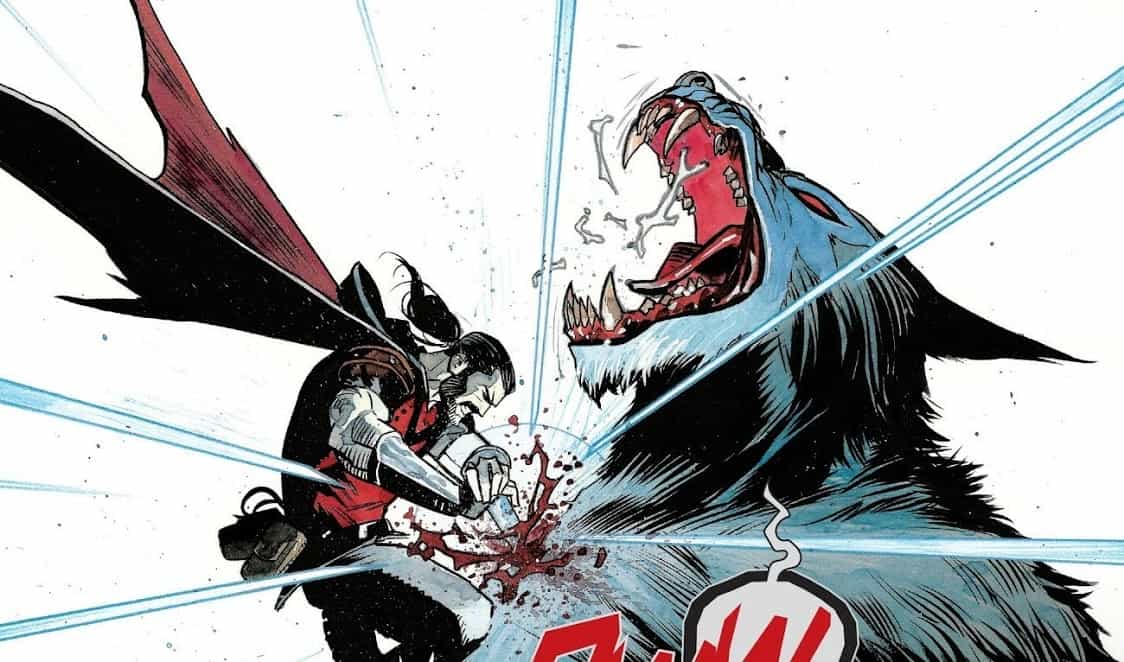 Does Klaus save the childer? Of course, he does, this is Christmas after all! Pick up this issue in stores today!

This is an insanely good book, as a longtime fan of Grant Morrison’s work and this series, in particular, I’m not surprised at how much I loved it, the story is wonderful and interesting. Not unlike Morrison’s obvious love of the golden age of comic books the reverence for traditional folklore is clear. This is the Christmas Special I recommend above all others, the ending is perfect as well, I left a ton of details for you guys to discover for yourselves. Do yourself a favor and get this book.

My one minor nitpick (and I do mean minor) is that the evil Klaus isn’t really given proper motivation besides being an evil (werewolf) version of our titular hero. That said he was a genuinely menacing villain, very much helped along by the stellar artwork in this book.

Dan Mora’s work on this series is undeniably great, and every bit as responsible for my love of these books as Morrison’s stellar story work. His completely drab and dour Xmastown is beautifully contrasted by the amazing visuals associated with Klaus, not to mention when they first showed the alien. I looked at the panel for a few minutes, blown away by the color work.

Go ahead and call this John Jack’s pick of the week, no small feat as this week is chock full of killer reads! I would recommend this book as an ideal Christmas present for just about anyone, but it’s too late for that isn’t it? Man, I can’t get over how much I liked this book! I’m gonna go read it again!